Arthur has raised $2.5 million so you can have meetings in virtual reality. You can also set up a virtual office, as the company is offering small businesses and enterprises a place in VR where they can meet, hold events, and escape the boredom of the Zoomverse.

Wearing my Oculus Quest 2 VR headset, I attended the company’s virtual press conference with a bunch of other tech press. We listened to the half-bodied Arthur CEO Christoph Fleischmann talk about how this will be the virtual collaboration market of the future. Arthur is in beta testing now, and you can access it through VR hardware like the Quest 2 or through the PC. The company says iOS and Google access are coming soon. And the public beta is starting today.

The idea is to enable geographically dispersed teams — and those separated by the pandemic — to meet and manage their work in a virtual space that is analogous to physical offices. If you want to gather at the water cooler and chat with people, you can do so using your voice, or you can take advantage of the 3D audio and pull someone aside to have a private one-on-one. You can watch videos together, show a slide presentation to a group, and engage in icebreaker activities. It was very easy for me to log into the world, as I just downloaded an app in the Oculus Store and tapped on it. I entered my password and joined the correct room. And there we all were.

“Many science fiction writers have talked about bringing people with holograms together,” Fleishmann said, speaking to our group from a virtual stage. “So while the idea itself might not be that innovative, how we go about solving it is interesting. We actually started as a distributed team. So from day one, we wanted to build a product we ourselves would use. We wanted our application to be built from the ground up for virtual reality and 3D spaces. We did not want to bring the limitations of the 2D world into this space. We wanted to build this for large multinational companies.”

Above: A virtual mixer in Arthur.

Fleischmann kicked off the event with an icebreaker activity in which he asked the group of journalists to line up on an elevated block. We had to organize ourselves into VR neophytes on the left and veterans on the right. I was the oldest veteran, as I first tried out the Dactyl Nightmare VR game in 1992, during a trip to Hong Kong. If you remember similar geekiness from the debut of Second Life’s virtual world in the early 2000s, it felt a bit like we were making history by having a large press event in VR.

Arthur got started in 2016, during the height of the VR craze.

“We always wanted to build a virtual office,” Fleischmann said. “We didn’t want to be a meeting tool. Immediately after our team got the first meeting space working, they hung pictures up on the wall. They made the space their own, into a virtual office. We wanted content persistence from the start. We wanted meeting spaces [that] would stay persistent. This means you can leave the space and come back the next day and you will see exactly the same content. You can continue working.”

Above: Dean Takahashi is the red guy on the end.

After the icebreaker session, we followed Fleischmann to a small amphitheater, where he talked about the San Mateo, California-based company’s journey. Arthur’s main mission is to enable people to work together remotely without making anyone feel like they’re left out. It can easily fit 40 people in the same virtual office space.

Just as in real life, your virtual office can be easily decorated with standard office equipment and furniture such as pictures, couches, and company-specific logos or gadgets. You can even meet your colleagues with true-to-life avatars — either in planned meetings or impromptu run-ins at your virtual coffee kitchen, giving you the feeling of truly being in the same space without lag or buffering. 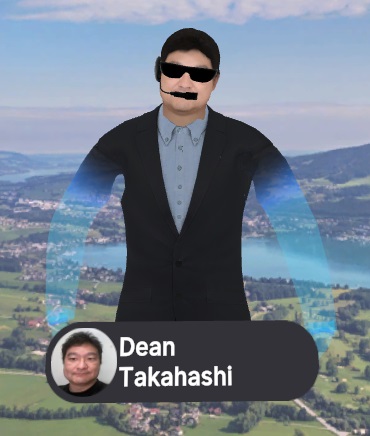 Above: Dean Takahashi makes a visit to Arthur.

Right now, the avatars are rudimentary. They wear sunglasses and microphones because the animation of eyes and mouths is too difficult to do with so many people accessing the platform through low-end devices, Fleishmann said. Those who enter via a PC or mobile device can’t get a full taste of the immersion or presence (feeling like you are somewhere else). But the environment is liberating in comparison to a Zoom video call. You can surround yourself with beautiful imagery or move around in the space while talking to people.

Going beyond what is possible in real life, Arthur equips its customers with superpowers such as the ability to teleport from place to place or lift, scale, and move whatever they want. Arthur spatial audio to facilitate group workshops lets you draw on whiteboards, has virtual monitors so a whole group can watch something, and includes ways for you to capture and store what you see or record in the meeting space. It has file integration systems, presentations, internet browsers, and more. We moved around by teleporting, which involved holding down a button, pointing at a spot where we wanted to go, and then releasing the button. It was easy to navigate, and it helps reduce the risk of nausea. 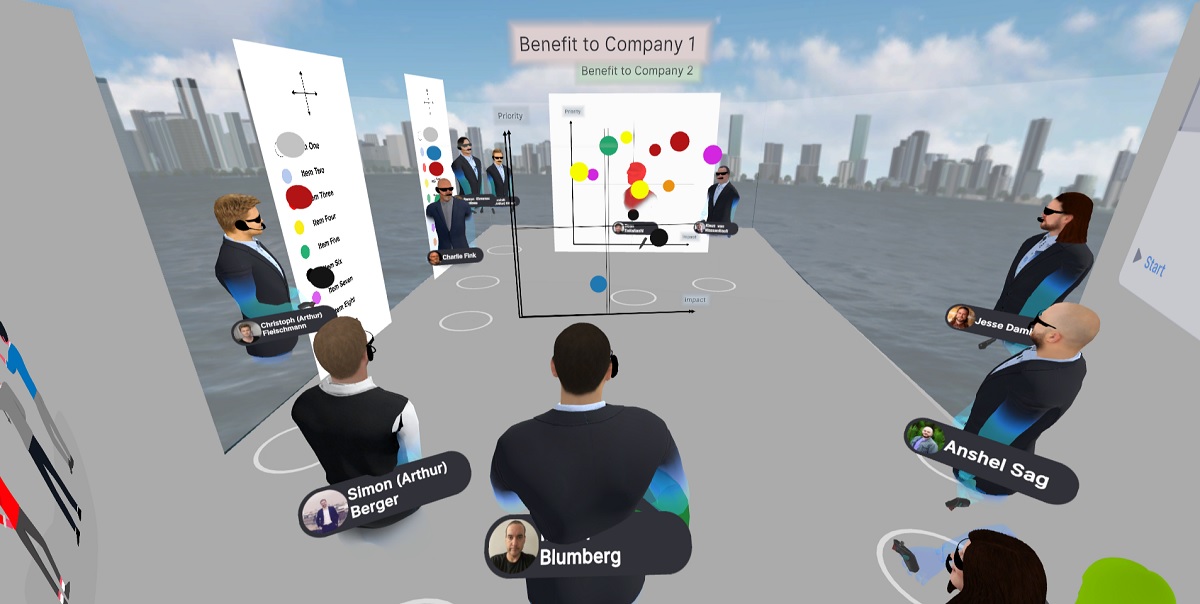 Above: Working on whiteboards in Arthur.

A big part of the company’s mission is to help people visualize their thoughts. Arthur’s team in seven countries and three continents has now met in VR for 24,000 hours. Usage among customers went way up after Facebook launched its wireless Oculus Quest VR headsets. The United Nations recently held a meeting with 60 people from 15 different countries. Charlie Neuner, a representative from PwC, talked about how the accounting firm has used Arthur to run immersive workshops and clinics.

Arthur also has data security in the form of end-to-end encryption. The service is powered by Amazon Web Services and can scale to meet any size environment, Fleishmann said. He said it’s also carbon neutral.

Arthur raised the money from Draper Associates and others. The company now has 34 employees, which means it may have to move to a bigger virtual office space soon.