Matternet’s Station is a ‘safe drone portal’ for hospitals

Drone logistics platform developer Matternet today unveiled the new and improved Matternet Station, which the company describes as an “aviation-grade” evolution of its existing autonomous systems. It lets flight directors sitting in a remote control center monitor traffic and operations before takeoff, enabling customers like hospital systems to fulfill delivery requests in a fraction of the time.

Practically speaking, by replacing road couriers with the Station, purchasers like WakeMed might improve patient outcomes. “[We] … see the benefits for our patients [in] faster and more predictable deliveries,” said WakeMed ENT physician and medical director of innovations Stuart Ginn. “We look forward to integrating the Station and expanding other parts of the network, including new transport routes that will connect additional facilities within our system.”

The Station — which measures around 10 feet tall — is integrated with Matternet’s autonomous M2 Drone and Cloud Platform and provides a dashboard from which flight directors can send and receive packages. Each Station comes with its own automated aerial deconfliction system that manages nearby drone routes, and they’re equipped with technology that guides Matternet’s M2 Drone to precision landing on the platform. After landing, the Station locks the drone in place and automatically swaps its battery and payload. When the drone is not in use, it’s parked in a hangar on top of the Station.

In its standard configuration, the Station holds four payload boxes, which are kept at a controlled temperature. Matternet says that the Station uses an ID badge-scanning system to track payload movement, and to allow only authorized personnel to deposit or retrieve a payload. 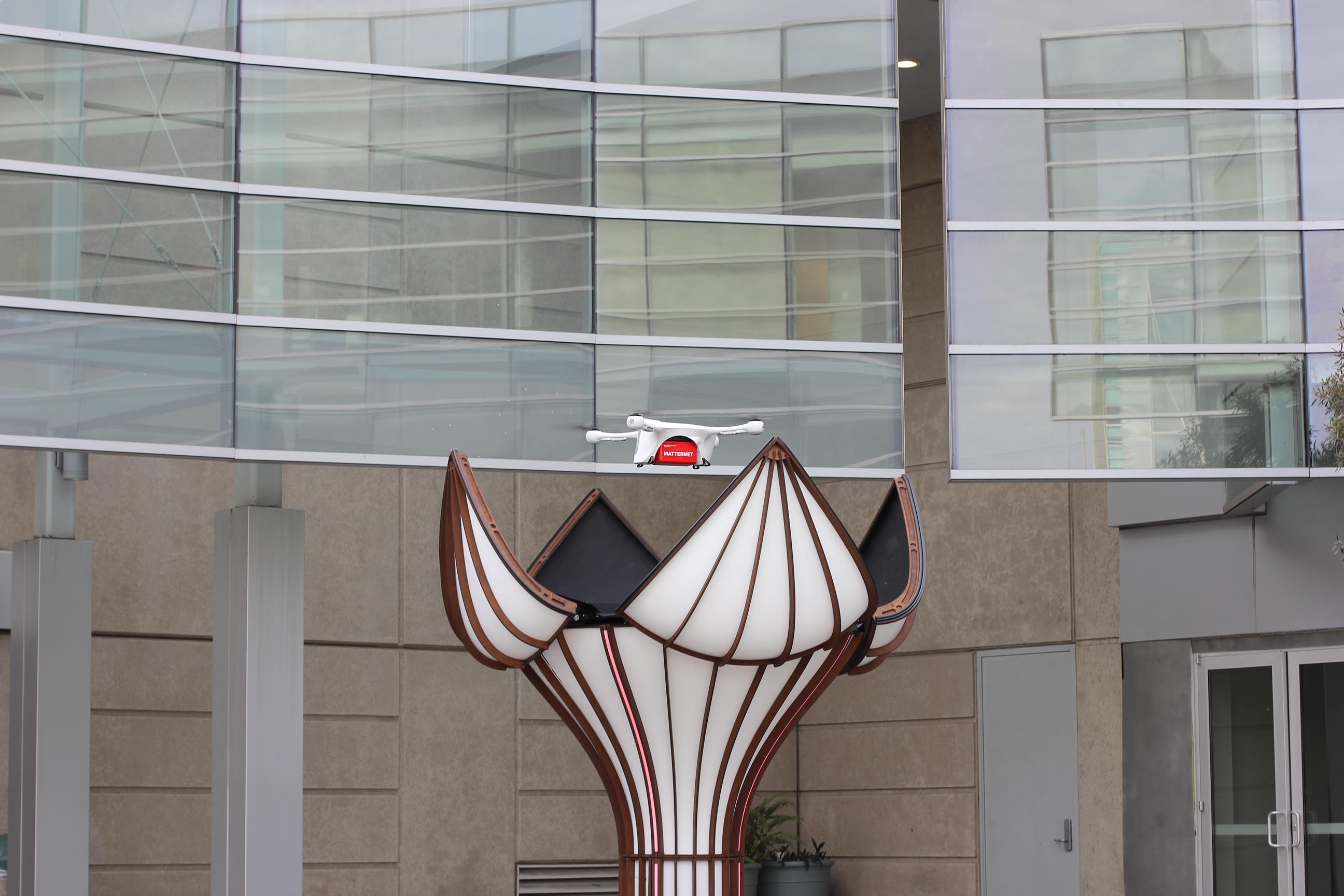 “Our vision is to connect every healthcare facility in every metropolitan area with the fastest transportation method available today,” said Matternet CEO Andreas Raptopoulos. “We are building the technology platform for extremely fast, point-to-point, urban medical delivery, enabling hospital systems to shrink patient waiting times and save millions of dollars per year through the centralization of laboratories and medical inventory.”

In March 2019, Matternet collaborated with UPS to launch an aerial delivery service from WakeMed’s flagship hospital and campus in Raleigh, with flights taking place roughly daily. The two companies later expanded the pilot to the University of California San Diego Health system as part of UPS’ Flight Forward program.

Matternet’s programs haven’t been without bumps in the road — Swiss Post decided to temporarily ground operations after two incidents in 2019, including one where a drone crashed in a forested area nearby where kids were playing — but it claims it’s flown more than 1,500 flights at WakeMed and delivered close to 8,000 lab samples to date. And operations with Swiss Post resumed earlier this year.