Augury, which describes itself as a “machine health” AI solutions provider, today closed a $55 million funding round on the heels of new global partnerships and product rollouts. A company spokesperson says the proceeds will be used to sustain and accelerate Augury’s growth through new hires, R&D efforts, and customer acquisition in and beyond the U.S.

As it turns out, mechanical problems in combustion engines, fans, and pneumatic presses can be detected from the sounds they produce. Patterns embedded within the noise communicate useful information, some of which can foretell trouble.

Inspired by this idea, software developer Gal Shaul and analog signal processing engineer Saar Yoskovitz cofounded Augury in 2011. The two describe the startup, which is headquartered in Israel and New York, as a “Shazam for machines” whose sensors record readings from commercial refrigerators, industrial-scale heaters, and more. The sensors process vibration, temperature, and magnetism metrics and upload them to the cloud, where AI algorithms analyze them to make predictions about machines’ health.

Augury already counts Johnson Controls, Brooklyn Navy Yard, NYC Department of Education, Grundfos, PSG Dover, Trane, and Carrier as customers, but it is intent on expansion. In the near future, Augury plans to build a network of delivery partners including ProPac in Germany, Caverion in Finland, Pluriserve in Italy, Nuveto in Latin and South America, and 42 North in North America to supplement installations of its equipment. Augury also intends to roll out new language support for its product suite, both for the platform itself and the key alerts that customers receive. And the company will broaden its range of country-specific certifications to enable deployment in more geographies. 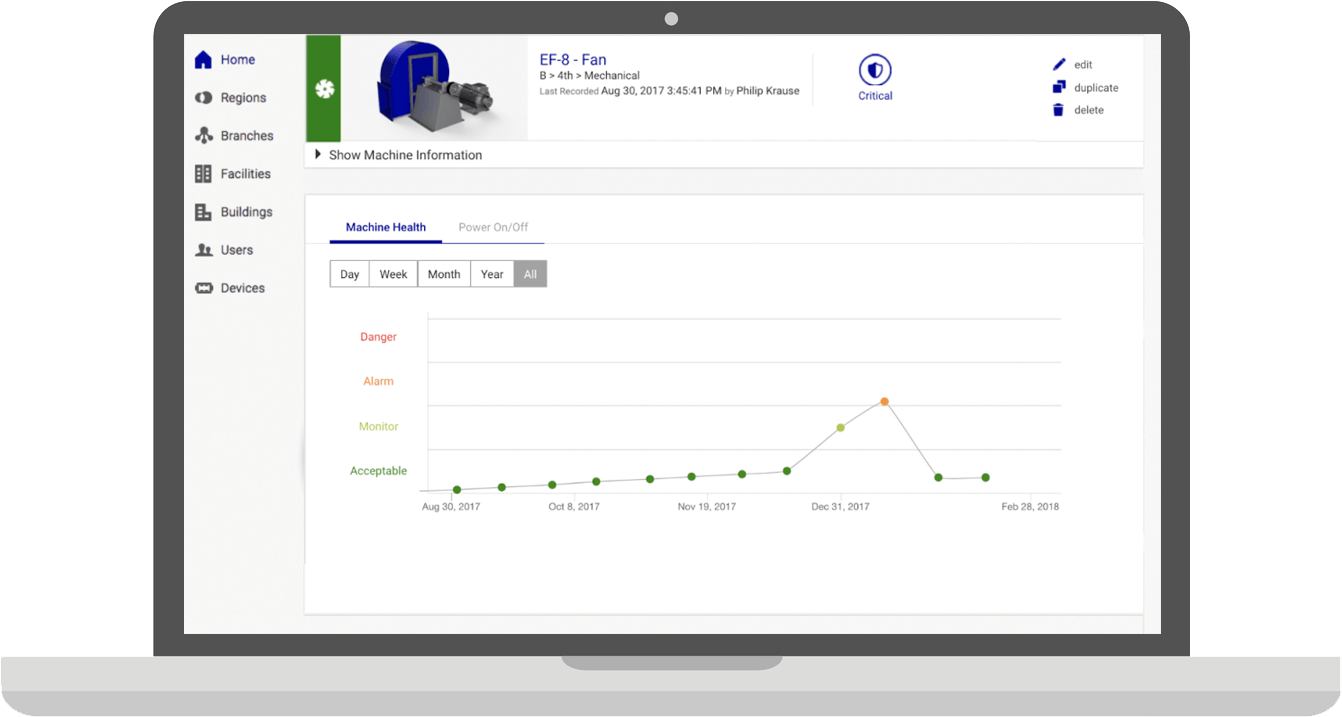 Augury’s technology is built such that it improves with scale. The sensor measurements, which are captured at different spots in machines being monitored, are used to establish baseline readings in Augury’s cloud backend. They’re then compared to the sounds produced by similar appliances owned by other customers, eliminating the need for Augury to retrain its models for each new machine. Over time, the system begins to recognize abnormal sounds and other failure indicators — for example, the noises made by faulty actuators in lifter robots versus actuators in other devices.

Early on, Augury worked directly with service companies and facility managers to diagnose systems such as pumps, fans, chillers, and HVAC systems in commercial buildings. But the company has since expanded service to noncritical machines, for which it provides continuous monitoring to diagnose machine health and suggest best maintenance practices.

Predictive maintenance technologies aren’t new. They’ve been used for decades in jet engines and gas turbines, and companies like GE Digital’s Predix and Petasense offer Wi-Fi-enabled, cloud- and AI-driven sensors similar to Augury’s. Furthermore, the market is entrenched. According to a recent report by analysts at Markets and Markets, predictive factory maintenance could be worth $12.3 billion by 2025.

But Augury CEO Yoskovitz has grand visions for the company’s technology, which he hopes will one day be built into consumer appliances. In a step toward this, Augury recently introduced a Munich Re-backed repair and replacement warranty that compensates customers up to $100,000 if a missed diagnosis leads to failure of certain equipment. Yoskovitz expects the startup’s contracted annual run rate to increase threefold in 2020 compared with 2019 into the double-digit millions, with 400% year-over-year net dollar retention fueled by expansion with over 70 customers including Colgate, Hershey’s Essity, and Heineken.

“Our business has grown immensely this year, as we’ve seen machine health emerge as the foundation of any digitization and ‘Industry 4.0′ strategy,” Yoskovitz told VentureBeat via email. “The early chaos and challenges of COVID have thrust us into a new reality — a reality where the world’s near-total dependence on supply chains, and the machines that drive them, has never been clearer. A reality where agility and resiliency in manufacturing operations have taken the front seat. A reality that is accelerating the adoption of digital tools that drive the insights into machine health to fuel remote collaboration, increase workers’ productivity, and inform better risk management.”