Perfect World Entertainment and Cryptic Studio’s Magic: Legends goes into the open beta next month. Soon players will have their first chance to experience everything that Legends’ unique blend of action-RPG gameplay and Magic: The Gathering deck-building has to offer.

It’s been nearly a year since Cryptic first showed off Magic: Legends at PAX East 2020, and naturally, a lot has changed. For one thing, the studio isn’t calling it an MMO anymore. “This is kind of how the project has evolved over time,” principal lead designer Adam Hetenyi says, “When the project first started up years ago, it was conceived more as a slower paced MMO. And over time, it evolved more into an action-RPG.”

If you’ve kept up with the development, that distinction isn’t entirely surprising. Magic: Legends seems to have all the trappings of a standard isometric action-RPG like Diablo 3 or Path of Exile. But the game didn’t necessarily make a total pivot away from the MMO genre either. “It’s an action-RPG, but because we’re Cryptic and we run MMOs, there’s a huge amount of MMO DNA in the game,” Hetenyi says. “Through the systems of the game, progression, and advancement, this is where you see the MMO-ness come through, but second-to-second is definitely in the action-RPG space.” 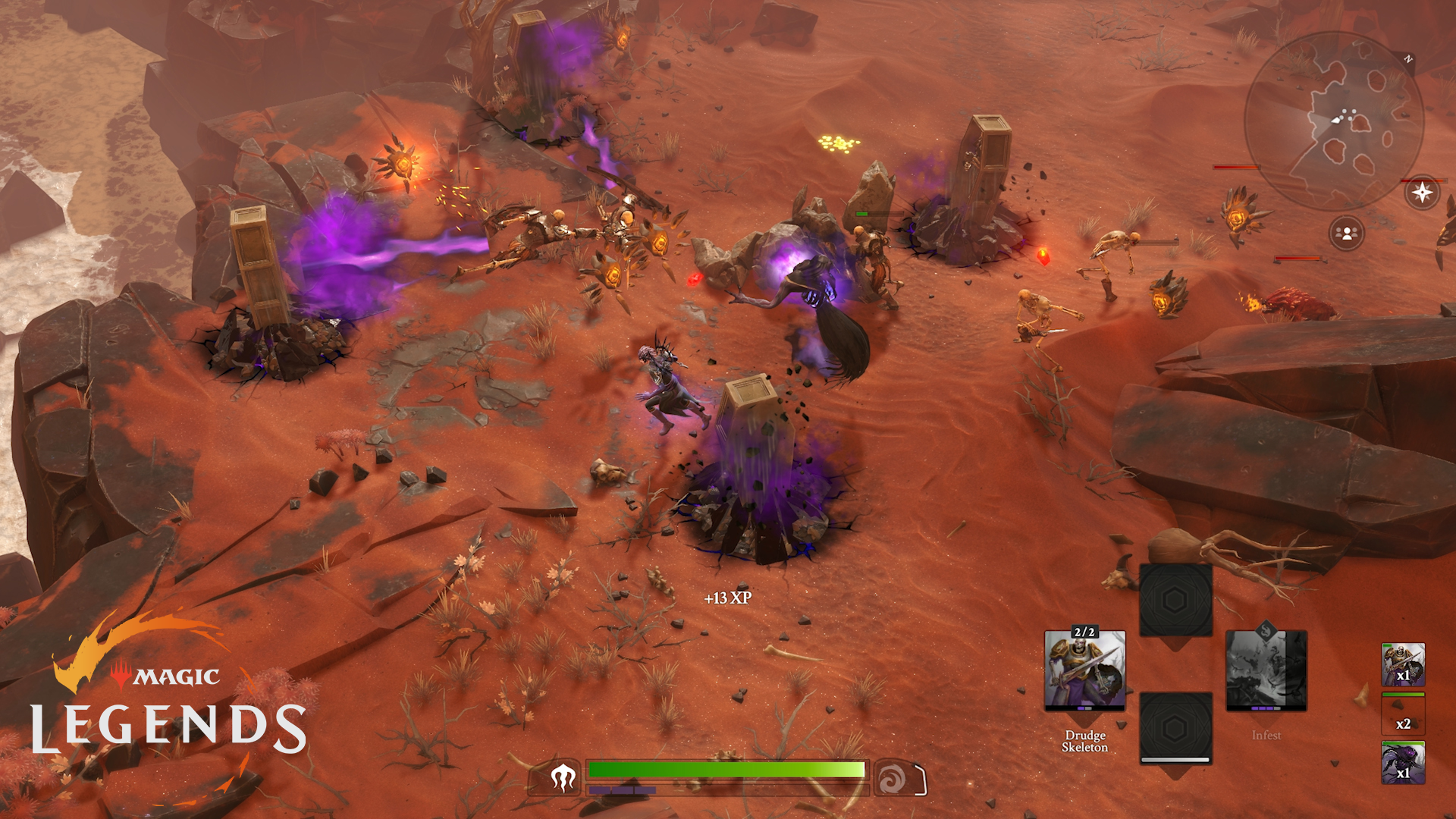 Cryptic Studios, known for long-running MMORPGs Neverwinter and Star Trek Online, is certainly very familiar with developing and supporting MMOs. Hetenyi also comes from an MMO background, having worked on games like Rift and Trove. But he also brings his ARPG experience from running the design team on both The Surge games. That overlap says a lot about how Hetenyi is approaching Magic: Legends. “For me, it’s right in the epicenter between those two worlds,” Hetenyi explains. “We’re trying to make really good-feeling gameplay with really deep systems, but also with the MMO aspects. Lots of different options in terms of gameplay style, lots of different ways to advance, lots of different activities in the game, and maintaining it all as an online game means putting out new content all the time.

Magic: Legends may play a lot like Diablo 3, but when it comes to the amount of content that will be added to the game over time, Cryptic is definitely treating it like an MMO. When asked if the game has more live service-style ambition than something like a new season in Diablo, Hetenyi said: “Big time.”

“The Cryptic Methodology is very much around giving players new stuff to do,” he continues. “We’re going to be standing up new features of course, but the bigger pushes people are really going to notice is going to be stuff like going to visit new planes.” Traveling through the multiverse, or Planeswalking as it’s called, is a core aspect of Magic lore and a major way that Cryptic will deliver new content to Magic: Legends. Initially, the game will feature five planes, each with its own core campaigns, that can be experienced in any order. Each region comes with its own main overworld with branching gates into individual, instanced missions, as well as public event-style “emergent skirmishes,” mini-quests called “deeds,” a threat escalation system that leads to world boss encounters, and a wide variety of progression goals to pursue. The introduction of new realms is just one way Magic: Legends will continue to grow over time, but it’s a great example of how Hetenyi and his team at Cryptic are building something far different from your standard action-RPG. 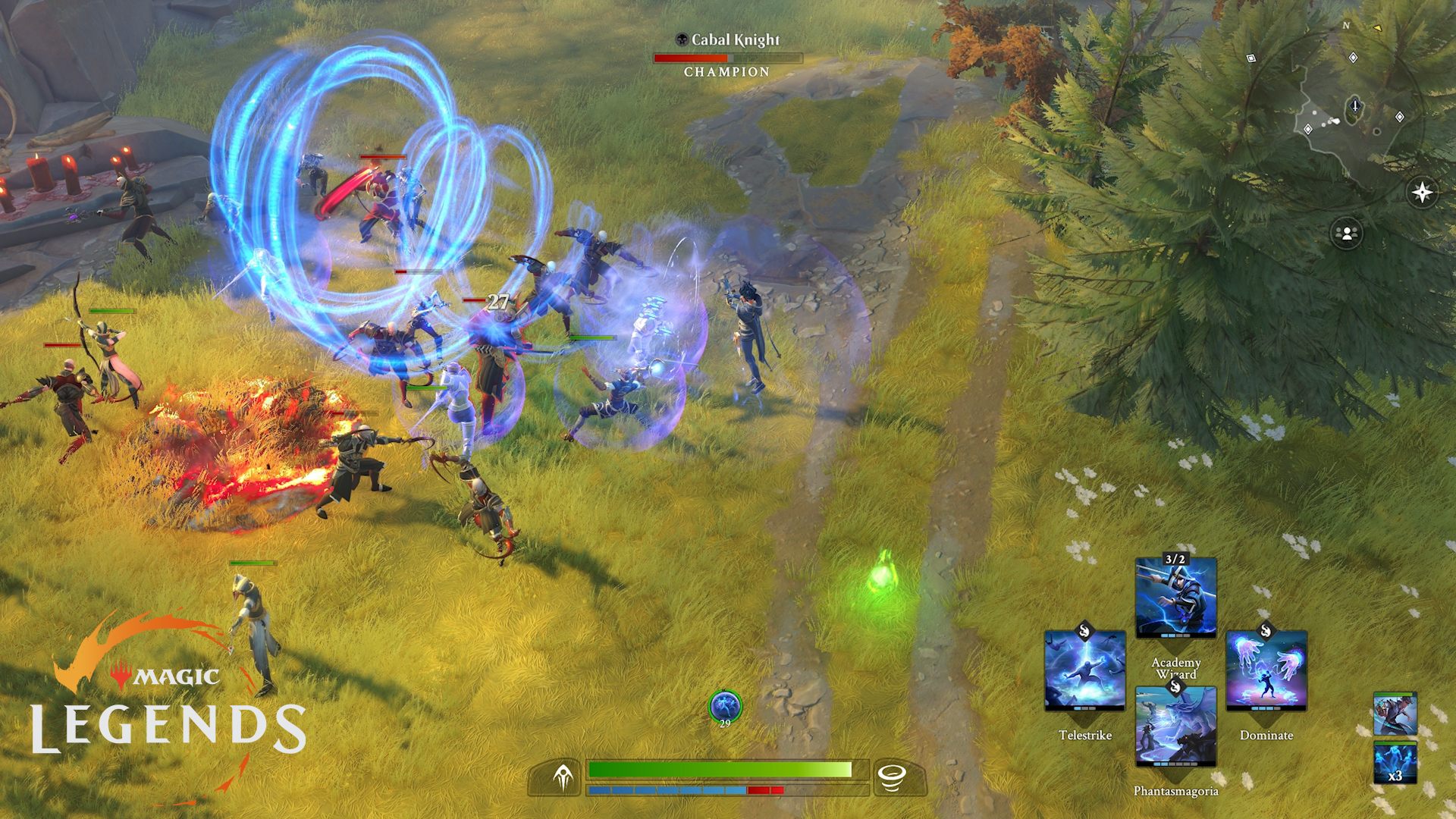 The other big change from last year’s demo is the decision to include weapons and armor in the loot system. “A lot of people asked, ‘Ok, so what am I gonna wear on my body?,” Hetenyi said. “Our response was, ‘You’re not gonna wear loot, isn’t that great?’ And people often responded ‘No…that’s not great.’” Yesterday, Cryptic released a detailed explainer video (narrated by Hetenyi) breaking down exactly how gear will work in Magic: Legends. “It’s comfort food,” Hetenyi says. “It’s a system we know people wanted so we added it. But we have our own little twist on it, of course, because we still don’t want to burden people with a traditional inventory system.”

To that end, players will have access to only six slots where gear can be equipped that increases stats, as well as provide triggered effects that synergize with specific spells. Rather than amassing a collection of gear to later sell to a vendor, duplicate gear will instead either unlock new modifications to equipped gear or provide upgrade materials for that specific piece of equipment. It’s a unique approach to gear, but it’s a system that maintains the developers’ vision for the game. “Things that players expect, we want to make sure are present for them,” Hetenyi explains. “But because it’s a Magic game, there’s lots of elements that are unique to what people are going to be doing here. So like the deck building process and the random hand aspect of your gameplay is really the differentiators from the traditional action-RPG that we’re trying to do.”

Magic: Legends is really two hybrids. It’s a card game/RPG hybrid at the top level, and as you dig into the gameplay and progression systems, it’s an ARPG/MMO hybrid as well. For Hetenyi, if you love any of those things, you’re going to love Magic: Legends: “If you’re a traditional CCG player, then this is going to give you an action-RPG that has a lot of elements that you’re going to recognize from your CCG gameplay,” he explains. “If you’re an action-RPG player, then this is an action-RPG that is going to give you this new type of deckbuilding CCG experience in your RPG. I see it as being differently but equally attractive to different target audiences.”

Whether you’re a fan of Magic or Diablo, you’re “going to have a ton of stuff to really sink [your] teeth into,” according to Hetenyi. 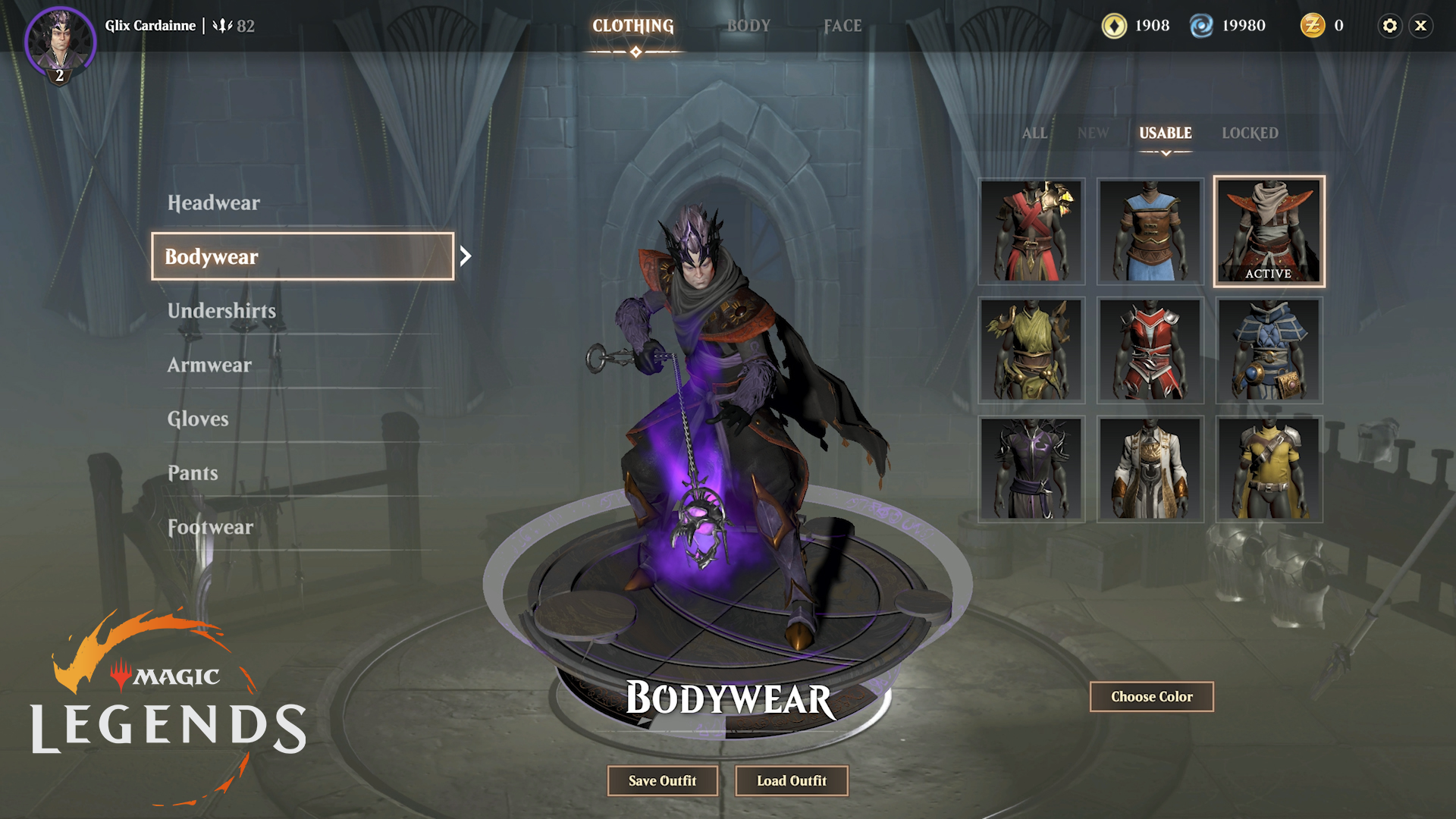 Next: “Kasumi is Ready to be at Your Service” – An Interview with Mass Effect’s Kym Hoy