The Best Improvements In GTA: The Trilogy’s Latest Patch

Yesterday another major update dropped for GTA: The Trilogy, and the patch notes were extensive to say the least. It's fair to say these Unreal-powered remasters of Grand Theft Auto 3, Vice City, and San Andreas have been disappointing, plagued by performance issues, questionable artistic choices, and a general feeling that the distinctive atmosphere of the PS2 classics has been lost. But some of the biggest issues, including a few that have been widely mocked on forums and social media, have been addressed in this new patch. Here are some selected highlights from Rockstar's long, long list of fixes.

Finally, there are clouds over San Andreas

One of the most jarring things about the San Andreas remaster was flying into the air in a plane and seeing the entire map all at once—including the limits of the world, with the ocean squared off. It made a world that once felt massive look laughably tiny. Now, post-update, there's a 'Ground Haze' option that covers the state in a blanket of cloud. It's a neat effect, with tall structures like the skyscrapers of downtown Los Santos or San Fierro's Gant Bridge poking above the haze. The world still feels smaller than it did when it was obscured by the PS2 version's thick wall of distance-obscuring fog, but this is still a major improvement. I'm not sure why it's switched off by default, though—it should be a standard feature.

The classic menu sounds are back

This was a pretty minor gripe, but I hated hearing San Andreas' UI sounds in GTA 3 and Vice City. Now, thanks to the 1.03 patch, those old, nostalgic menu sounds from the PS2 versions of both games are back in their respective remakes. UI sounds are a big part of the feel of a classic game, so they really should have been there in the first place. 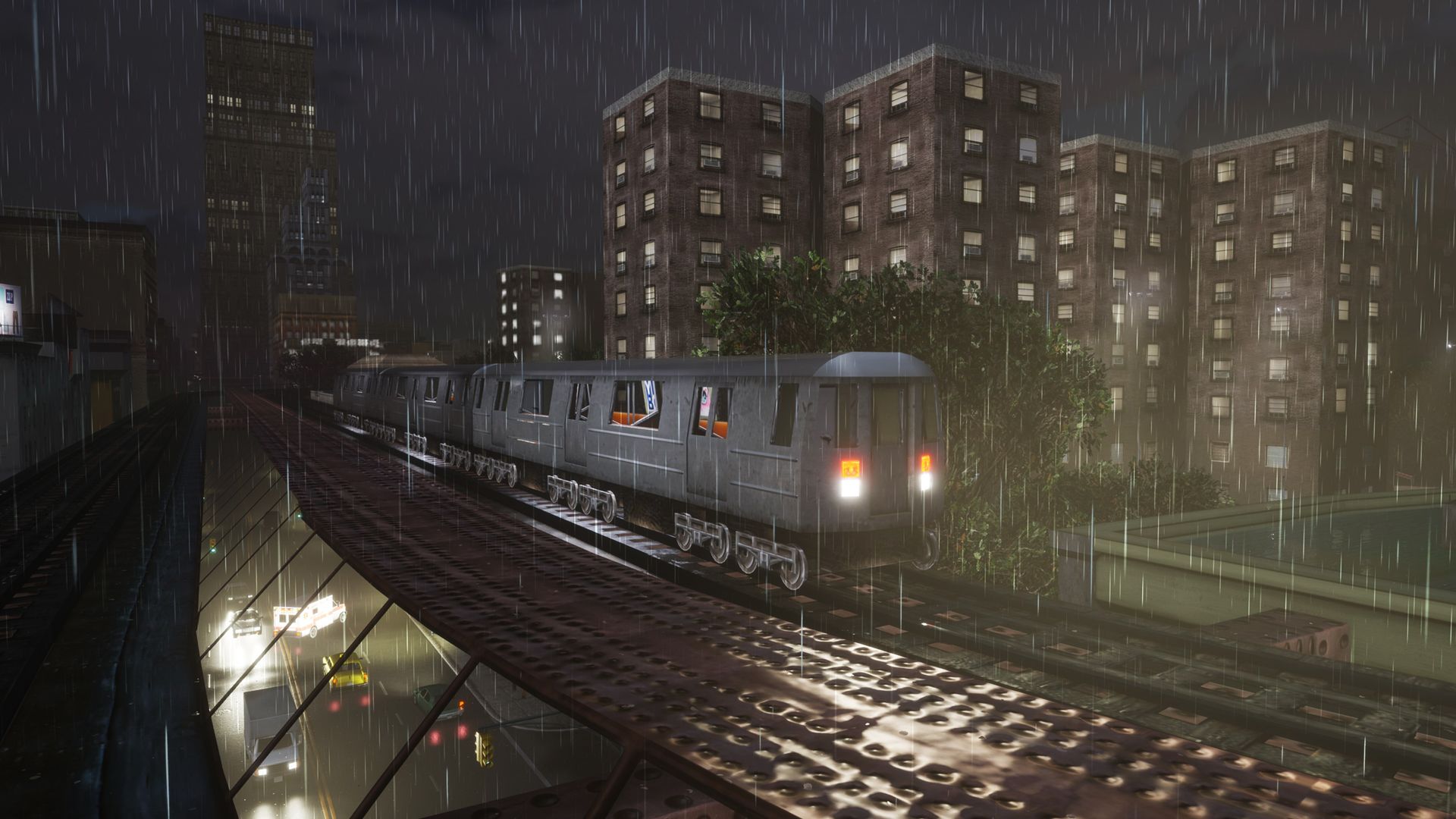 When I first played the Definitive Edition of GTA 3 on launch night, I thought my PS5 was dying. The intro sequence was completely obscured by one of the most hideous rain effects I've ever seen, rendering an iconic scene basically unwatchable. I don't know what was worse: the thick, white rain itself, or the weirdly grid-like raindrops falling on the roads and sidewalks. So I was glad to discover that, post-patch, that moody introduction to 2001's Liberty City now looks great, with subtler rain effects that now enhance, rather than destroy, the mood. I'm still baffled by how that original version of the intro got past quality control, though.

In-game rain is a lot better too

It isn't just GTA 3's intro sequence that benefits from the new rain effects—they look a lot better in-game too. The effect is now a lot more understated, with raindrops blending into the image in a way that doesn't obscure the distance and obnoxiously flood the screen. They also fixed that mind-melting bug where the rain would render behind bodies of water, which is another thing I'm stunned the normally fastidious Rockstar thought was fit to release.

Some of the reworked character models in GTA: The Trilogy, particularly in San Andreas, are comically bad. Many of the worst examples are still in the game post-patch, like CJ's love interest Denise, but developer Grove Street Games did at least make Old Reece old again. This hasn't been a complete success, however. He still looks nothing like the original character model, but his hair and beard are now suitably grey. I don't know if I should even be counting this among the highlights of the patch, as it's a pretty half-assed effort. But it at least shows that the developer is aware of, and willing to correct, some of its more egregious mistakes. 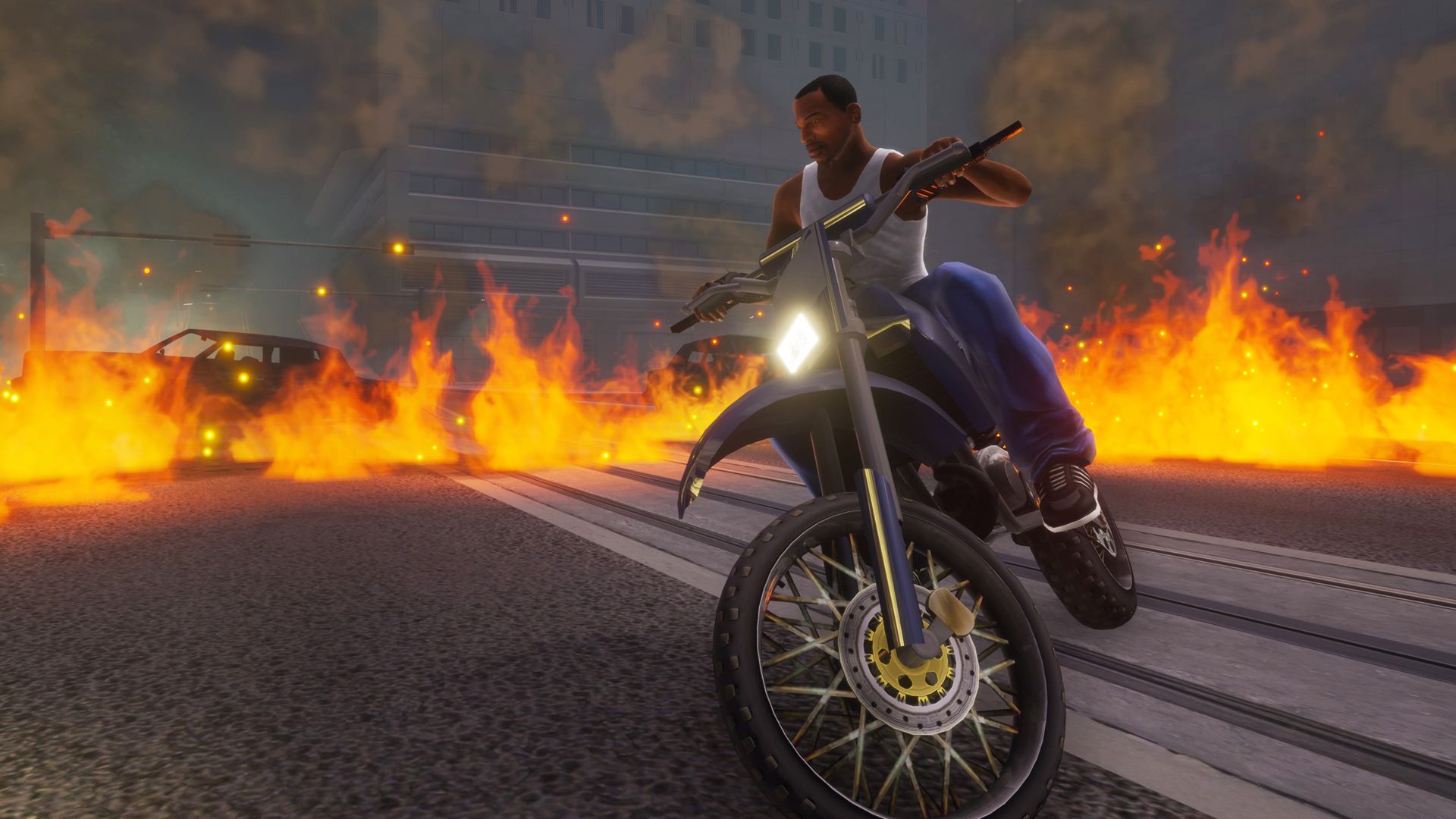 The return of the cinematic camera

I honestly didn't miss this feature as much as some people, but it's a Grand Theft Auto staple, so it's weird it wasn't included in the original release. Now when you cycle through camera modes while driving you'll be treated to a series of dramatic, cinematic angles of you losing control of the wheel, crashing into streetlamps, and running peds over.

And all the rest

CJ's original body-specific running animations have been restored, so jogging while overweight or muscular now looks like it used to in the PS2 version of San Andreas. A lot of those embarrassing spelling mistakes, presumably a result of AI texture upscaling gone awry, have been corrected. The Tuff Nut Donuts sign has been fixed. It no longer rains indoors in a bunch of cutscenes. Cesar's weird long fingers have been sorted too. It's obvious Rockstar and Grove Street Games are playing close attention to GTA forums, subreddits, and social media, where this stuff is constantly being discovered by fans and, rightfully, laughed at.

But the remasters are still kinda a mess

Props to Rockstar for getting these patches out so quickly, but it's still fairly unforgivable that GTA: The Trilogy was even given the green light to launch in the first place. There could be any number of things going on behind the scenes that led to it being released in this state. Maybe, if you'll indulge some uninformed speculation, publisher 2K is to blame, forcing the game out even when the developer told them it wasn't ready. Whatever the case, I feel bad for anyone who dropped $60 on it, expecting a heavy dose of nostalgia, but instead were left sad and deflated. I believe Rockstar can save it with patches, eventually, but I don't blame anyone who has just given up on the trilogy entirely. There's still a lot of work to do here, and a lot more issues to deal with, including lingering performance issues.