The matchmaking situation in Pokemon Unite is dire. In the interest of minimal queue times, the developers have designed a competitive mode where skill is inconsequential and anyone, even terrible players, can climb to the highest rank. It doesn’t matter if you know even the most basic fundamentals of objectives, spawn timers, or rotations. It doesn’t matter if you play selfishly and ignore your team while seeking out losing fights. It doesn’t even matter if you lose most of your games. The ranked system in Pokemon Unite is designed to only move in one direction. If you play enough terrible, unbalanced games, you’ll eventually make it to Master rank. Trust me, I did it.

To be fair, I am not the world’s worst Pokemon Unite player. I hit Master after 212 games with a 51.8 percent win rate, so at least I can say that I win over half my games. I try to take jungle as long as I don’t have to fight my teammates for it, and I always make sure I help my laners secure bees/bears and show up for Drednaw team fights. I spam “group up” right before objectives spawn, I counter farm when I know the enemy jungler is over-extending, and I always have my Unite Move ready at the two minute mark. I know how to be a good teammate and I don’t intentionally feed, yet I still lose 48 percent of my games. I know I still have a lot to learn and I could be carrying harder, but I can’t help but feel like the vast majority of my losses come from the sheer incompetence of my teammates.

Pokemon Unite does not make any attempt to match you with players at your rank or skill level. There are six ranks in Unite: Beginner, Great, Expert, Veteran, Ultra, and Master. Beginner through Ultra each have three to five classes (Ultra 1, Ultra 2, ect) while Master has its own point-based ranking system. Each Class requires four wins, or diamond points, to move into the next class. When you win your third game in Veteran 5 you’ll graduate to Ultra 1. Whenever you queue for a ranked game, you’ll be matched with players within three ranks of your current standing. This means that if you’re a Ultra 5 player who is one win away from Master, you can (and will) have Expert 1 players on your team. That’s a ~60 win spread between you and your teammates, which as you can imagine, represents a massive skill gap.

In order for games to be fair and competitive, Unite needs to match players with teammates and opponents strictly within their own rank. This should be the bare minimum expectation. Keeping queue times to a minimum simply isn’t worth the damage that frequent bad matches are doing to the player base. It doesn’t matter how quickly you can get into a game if everyone gets so fed up that they stop playing. Personally, I’d be willing to wait four or five minutes for a queue to pop if it meant that most of my games were high quality.

Unfortunately, narrowing the matchmaking wouldn’t solve the problem entirely because rank isn’t at all indicative of skill or even win rate. You begin each Class with one Diamond Point and you need to earn three more to climb to the next Class. You don’t fall out of your current Class until you lose a game with zero Diamond Points, meaning that the first point you get any time you enter a Class is a free win. Further, you earn Performance Points while you play for good sportsmanship, winning games, and scoring points. Anytime you lose a game Unite will attempt to deduct 100 Performance Points before it takes away a Diamond Point. As long as you have 100 Performance Points – including any you earned from the current match – you will not lose a Diamond Point.

Generally speaking, every fourth win counts as two and every fourth loss doesn’t count. This means you don’t even need to win remotely close to half of your games in order to climb all the way to the highest rank. If you play enough matches you’ll eventually reach Master, even if you lose most of your games. Good players will get there faster of course, but thanks to the wide-open matchmaking, they’ll still be playing with bad teammates forever, no matter how high they climb. There is no scenario in Pokemon Unite where you can guarantee that you’ll be matched with and against players at your skill level. Even the highest ranked Master players in the world have to play with low ranked people and high ranked people with low skill who got to Master rank by grinding.

The total effect of the Unite’s poor matchmaking system is an abysmal competitive landscape. Practically every game is filled with players that don’t have the first clue about how to play the game, even at the highest rank. Selfish, petty players will fight over the mid-lane, engage groups of enemies when they’re underleveled, ignore calls for support, and generally play in an uncooperative and unsuccessful way. What’s more, the punishment for leaving games and going AFK is so minimal that it has become extremely common to play ranked games with missing teammates, and the punishment for griefing and throwing is non-existent. Unite is a 5v5 game, but most of the time it feels like 1v9. 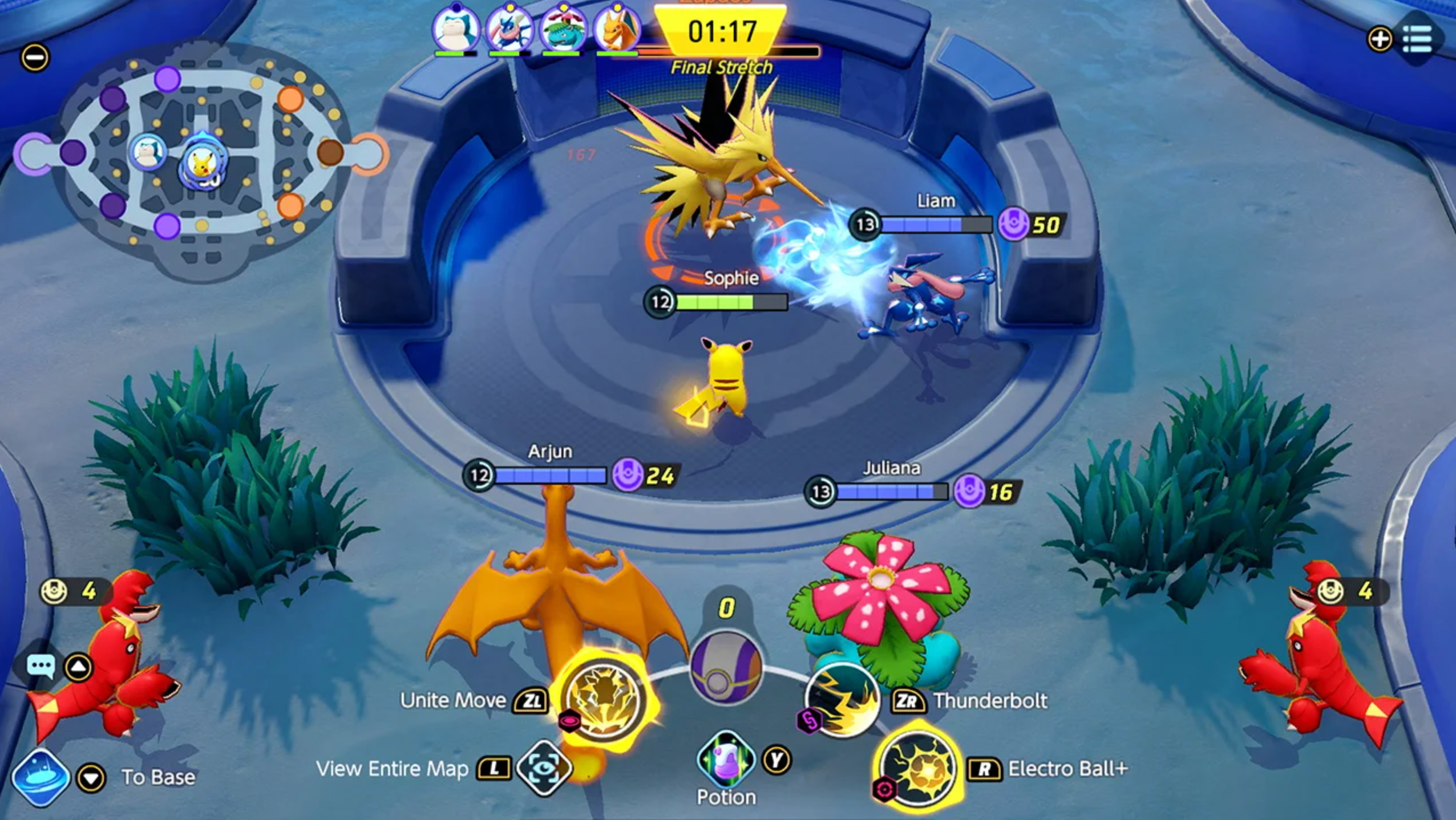 Pokemon Unite cannot survive under these conditions. The players that take competitive seriously will eventually give up and move on to other games that show more respect for our time, and Unite will become a wasteland of AFKers and people that give up as soon as they lose a single objective. I understand that Timi Studio Group wants Master to be an achievable goal for anyone that plays ranked, but the way the system currently works is a detriment to the quality of the game. We need narrower matchmaking to make games more fair and consistent – especially at Master rank – and we need strict punishment for leavers and AFKers. If you give up three minutes into a game you shouldn’t be allowed to play ranked, it's as simple as that.

Pokemon Unite is a very casual mobile game. It’s a free-to-play Switch and mobile with short, ten minute matches and a theme that is attractive to young audiences. I don’t expect Unite to be a giant esport or cater strictly to the most hardcore player base, but Ranked mode exists and it needs to be taken care of. Standard and Quick games can be a free-for-all for quitters and half-asleep players that don’t care to team up for Drednaw, but Ranked needs to be a place where people who care about playing the game well can find quality matches. Right now, that simply isn’t the case.