Pokémon is better without pesky humans

Looking back on over two decades with Pokémon games, I’d have a hard time giving you specifics about most of the stories — I tend to mostly remember the broad strokes. Kids go out into the world to battle monsters, get stronger, and eventually become champions. There are friends, rivals and evil conglomerates along the way. The details might change from game to game, but the general outline stays the same. Some games in the series tackle more ambitious topics, or they introduce neat characters, but by and large, when I play Pokémon I’m not emotionally invested in what happens.

Pokémon Mystery Dungeon: Rescue Team DX, a Nintendo Switch remake of the Game Boy Advance and Nintendo DS games, bucks that trend. I care deeply about all the characters and what happens to them. Incidentally, there are no humans meddling in the affairs of these Pokémon — well, aside from you.

And even you aren’t quite human: the game begins with a mysterious force transforming you into a Pokémon, too. After a few hours I wasn’t sure that I ever wanted to turn back.

You are thrust into a full-fledged Pokémon society, where every monster has a role. A Persian guards your riches at the bank, while a Makuhita reigns over the dojo, where your monsters can train to become stronger. Technically, we’ve seen this sort of thing before; humans put Pokémon to work outside of battle in the games and supplementary media. But it’s fascinating to see what Pokémon would do on their own volition. Where humans presumably chase profit and celebrity, Mystery Dungeon poses a reality where Pokémon largely band together to help each other out simply because it’s the right thing to do. Humans could never. 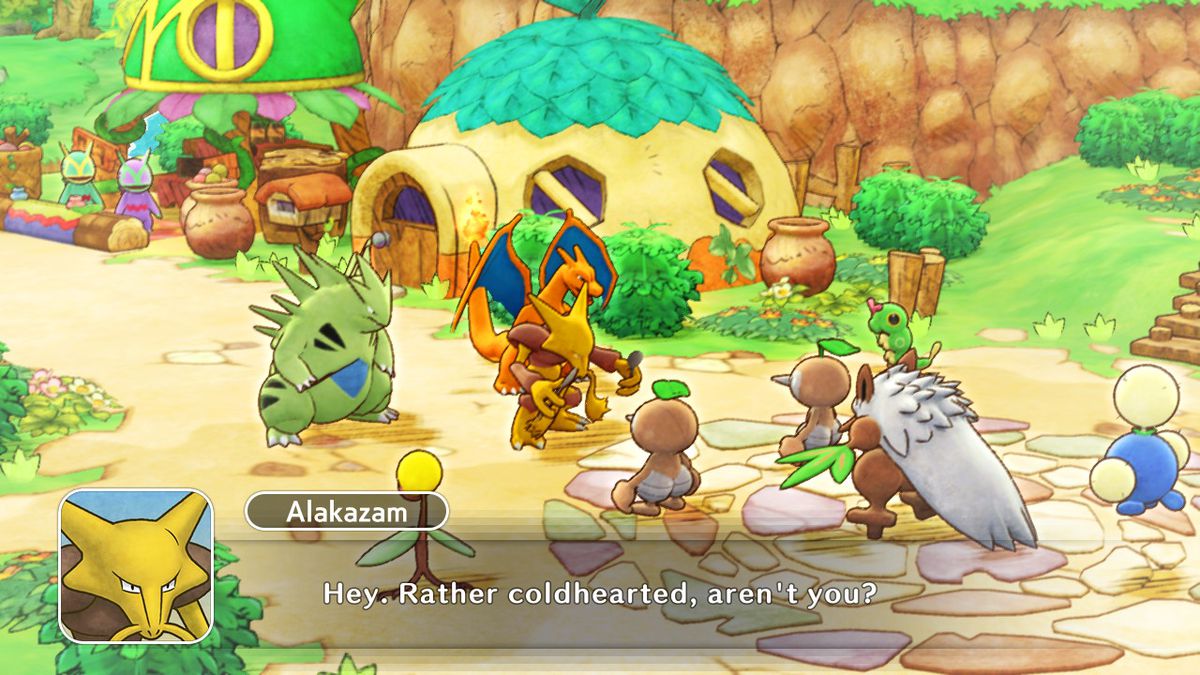 The “rescue team” in the title refers to clans who go out into the wilderness to save friends in need. Maybe a Mudkip got over its head and fainted in a water cave. Perhaps a Pikachu is slowly starving to death deep within a forest. After spending decades forming attachments to these monsters, merely typing out these hypothetical scenarios feels stressful. Of course I want to save my hapless babes!

Reading the rescue requests reminded me of watching my cats getting stuck in a paper bag. Here we go again, I say, as if I could ever get tired of seeing the ways an animal’s curiosity and bravery gets the better of them.

To help a Pokémon, you have to dive deep into randomly generated dungeons that will immediately be familiar to anyone who has played a game within the Mystery Dungeon genre before. Through a top-down view, you move through the terrain square by square. Dungeons are filled with enemy Pokémon, but they don’t move or attack until you do, which adds a crunchy strategic layer to the proceedings. You get to think out your moves before you act.

Everything else is governed by chance. Perhaps you’ll find a damage-boosting item, or a good chunk of cash. Perhaps you’ll accidentally step on a trap that puts you to sleep, or maybe the floor you’re on is infested with hostile monsters. You never know what you’re going to get.

Pokémon Mystery Dungeon’s demo dragged me, and I’m grateful for it

You can think of Mystery Dungeon games as ongoing gambles. How far can you go without depleting all your resources? Will you risk it and go deeper into the dungeon? Are you sure?

All it takes is something small and unexpected happening for your entire run to turn sideways, like stepping on a tile that paralyzes your character — which could then allow a nearby weak Pokémon to destroy you. Lady Luck has no favorites; one moment she might bless you with a room-clearing item, and the next she might decide that you get trashed by five critical hits in a row.

Mercurial as the game might be, there’s still a sense of fairness here. Part of it comes down to prep — you’re supposed to be ready for anything, ideally equipping your toolbox with a wide variety of status-healing berries and situation-specific items. But by being absolutely clear about the indiscriminate rules, I’m never truly surprised by what happens to me in a dungeon. I was warned before I ever stepped foot inside of it; I’m responsible for everything that comes next. Life isn’t always fair, says the game, but I can’t always blame life.

If you die, tough luck. All the items you were carrying up until that point are gone, save for those which you stored in the town prior to embarking on your journey. 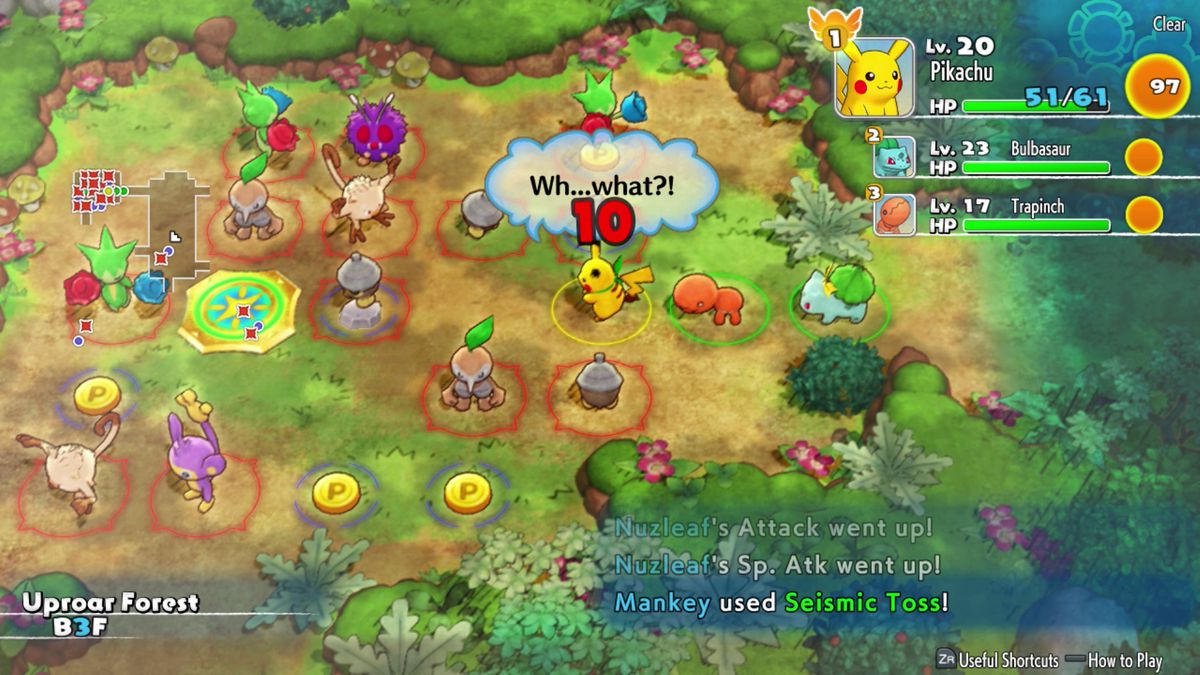 Much of these mechanics are standard fare for Mystery Dungeon games, but Rescue Team DX sets itself apart by doubling down on the Pokémon aspects. Each monster can have up to four moves from its wider repertoire, whether those are attacks, defensive moves, or buffs/debuffs. Typings still apply, so Thunder will still be super effective against, say, Flying-type Pokémon. Every creature you defeat nets you experience points, which help increase your level — and with higher levels come new moves that you can learn. Moves have PP, which means that you have to keep track of how often you use them before depleting your lot.

Moves can also be attained through TM items, which can only be used once. Pokémon still have a Nature, which bestows some sort of special mechanic, such as the inability for that monster to fall asleep. Some creatures can even have Rare Qualities, like a giving you a bargain-hunting edge with dungeon vendors. There’s a lot to keep track of, but by giving me so many options, Rescue Team provides 1more control over the situation than most standard Mystery Dungeon games. I can raise my Pokémon to grow and fight exactly the way I want, which in my case means hitting as hard as possible as quickly as possible.

Perhaps my favorite aspect of Rescue Team is that you’re not alone. You begin the adventure with one other Pokémon buddy, and as you go along, you can recruit more. Some of these creatures will be on your permanent team, but other friendlies you’ll meet along the way as you’re spelunking through the dungeons. You can run around with up to eight of monsters trailing behind you, which is more Pokémon than you can carry in the main games. Few things delight me more than trawling through a mountain with a small army of cuties in tow. The fact we’re all lined up is adorable enough to almost make me forget that the more teammates I have, the more savagely we’re going to beat up whatever poor sap stands in our way. Sorry not sorry. 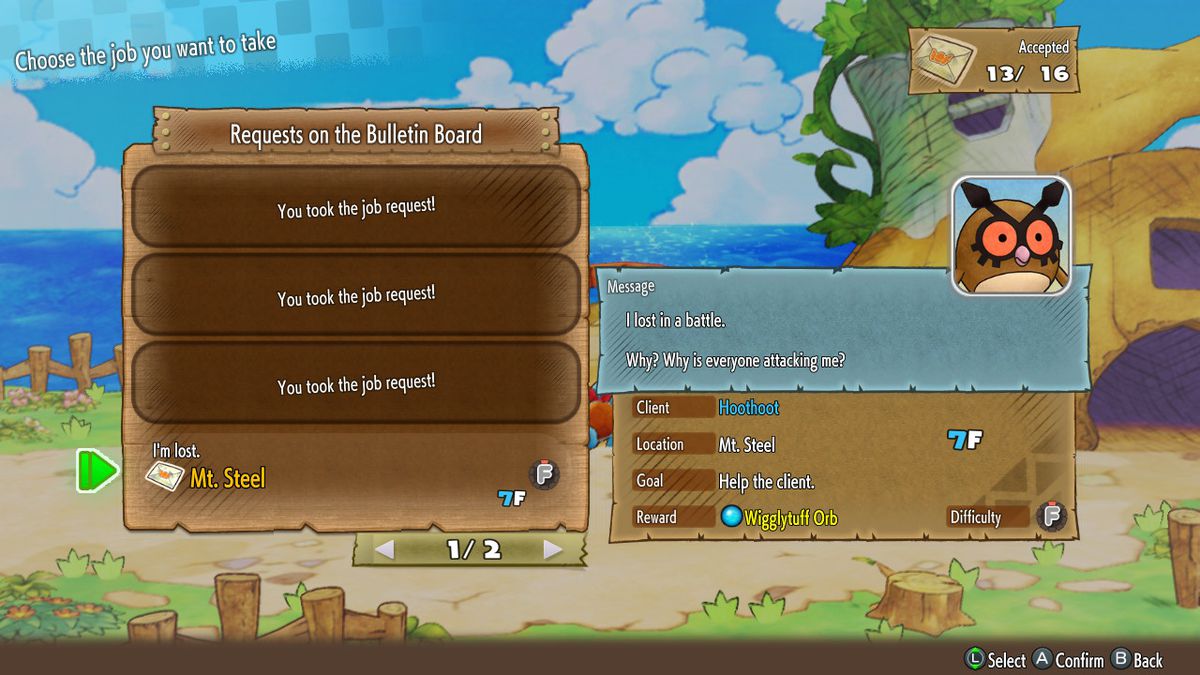 While I never played the original Pokémon Mystery Dungeon games, I’m still enjoying many of the Nintendo Switch enhancements. Most notably, the game’s watercolor aesthetics give everything a storybook feel, almost as if I’m playing through a fantasy of some sort. Given the lack of humans, that feels appropriate. The new version also allows for friends to come rescue you from fainting within dungeons via multiplayer — or, you can go help save others from the same fate. I haven’t toyed around with this much because I’ve been fortunate enough to not get into any tight pinches yet, but the fact this is possible at all is pretty cool. Thematic and helpful! There are also smaller details, like the inclusion of Mega Pokémon and rare Shinies. Neat, but not earth-shattering.

At times, Rescue Team can feel a bit like a grind. Some dungeons go on and on, and once you’ve got the core loop down, you pretty much know what to expect. I often play without looking at the actual game, instead gazing exclusively at the mini map that shows me the major points of interest. The trick is not getting too comfortable, though, because a long stretch of business-as-usual might be punctuated with something overwhelming. That’s the gambit; the tedium is genre-wide and intentional.

But a huge part of what keeps me trudging through this occasional humdrum is wanting to know what happens to my favorite monsters. Every bit of dialogue — holy shit, I can understand what all the Pokémon are saying and thinking now! — is a treasure. Rescue Team lets me get to know Pokémon as actual people, often building on top of the decades of fandom and indirect characterization established by the games.

Of course Charizard is in a cool rescue team that everyone looks up to. Of course Gengar the ghost is a devilish jerk who steals from others. Of course the motherly Khanghaskan, who carries around a child in her pouch, calls you sweetie when you use her storage services. It’s enough to make me want to never see another human in a Pokémon game ever again.