Ori and the Will of the Wisps expands on near perfection

[Editor’s note: We held off on releasing this review due to severe technical issues with the pre-release version of the game. The review below reflects time spent on the final, released version that is currently available to players.]

Ori and the Will of the Wisps invites you to dance inside a beautiful world. There is combat, sure, and there are threats, but the dance, and the beauty of your surroundings, are always the focus.

Moon Studios’ first game, Ori and the Blind Forest, was notable for the same reason. Here was a striking 2D platformer that staked out the visual middle ground between a Pixar short and an oversaturated photograph of a fantastical forest. Will of the Wisps is even more sumptuous and varied in its aesthetic, filled with delightful details that make so many frames look more like paintings than a video game. Screenshots and trailers don’t do it justice.

I found myself dawdling in the dimly beautiful Inkwater Marsh during my first hour with the game, watching the flashes of lightning play on the plump leaves crowding the forest floor. I was later dazzled as sunbeams lit up mossy gears that had once powered a massive waterwheel. The lake below was a marshy swamp, but, by executing a series of precise jumps through the clockwork structure and clearing away obstacles, I was able to get the wheel turning again. The purified water below turned a deep, inviting, clear blue.

Will of the Wisps’ world is constantly in motion. Leaves dance in the wind, bob beneath rain, and light up as Ori’s luminous body passes by. Ori and the Will of the Wisps’ environments betray their life with constant, often slight, movement; rising and falling as if a giant pair of lungs were inhaling and exhaling just beneath the level’s surface. But it’s not all about how the game looks, especially when it plays this well.

Will of the Wisps’ story, like its art style, picks up where Blind Forest left off. In the first game, the titular cat-like spirit set off to save the forest from corruption. The encroaching darkness had killed his mother, Naru, and a newly orphaned Ori began a quest to bring his home back to life. I don’t think it’s a spoiler to say he succeeded.

Ori and the Will of the Wisps guide: Inkwater Marsh map and item locations

Ori is now living with his makeshift family as Will of the Wisps begins, raising an owl hatchling that had been left behind by Kuro, a hulking bird that antagonized Ori for much of the last game.

Life is good in the quiet forest, in other words. But, the hatchling, with one small wing, is struggling to learn to fly. Ori offers the owl Kuro’s feather to help, fastening it to their wing. This is what allowed Ori to fly in the first game, after all. Ori and the hatchling take off on a test flight — beautifully portrayed in a stunning cinematic — but hey are blown off course by a violent storm, caused by the same corruption that Ori had defeated in his own land. That darkness still exists elsewhere, it seems, so Ori’s work is not yet done. The pair are separated in the chaos and Ori sets out to find the hatchling, and once again return the forest to its natural state of peace and beauty.

It’s a clever set-up, designed to bring Ori to an unfamiliar place, with new power-ups to unlock, new secrets to uncover and a new world to save. Blind Forest kept its characters mostly silent, allowing snippets of narration — delivered in the booming voice of the Spirit Tree — to drive the story. Moon Studios keeps that approach here, but introduces a memorable cast of characters to help Ori along the way.

I was especially fond of the mapmaker, Lupo, who said that he had ruined a perfectly fine piece of parchment by taking the name of Inkwater Marsh too literally. Plenty of other NPCs are waiting to talk with you in the game’s hubworld, Wellspring Glade. Some are just there to chat, like the lemur-like Moki, who approach Ori in groups, finishing each other’s sentences.

Others provide functionality, like Twilen, the opportunistic merchant who sells Ori shards, equippable stones that provide our hero with active skills or passive buffs. You won’t need to interact much with Wellspring Glade’s inhabitants to finish the story, but you’ll unearth a treasure trove of side quests and secrets by dedicating time to the village. The more grounded, yet still clever, conversations with these new characters adds an extra layer of connection to the game’s world.

I spent the bulk of the game exploring this new area of the game’s world, and the most important power-ups are tied to that exploration. I locate a spirit tree from which Ori can absorb a new ability about halfway through each new area, constantly changing how I can interact with the world, and adding to the places I can visit.

I gain the ability to boost through water at one point, enabling me to jet past falling blocks that previously killed me In the sandy Windswept Wastes, I earned a move that let me travel through walls of sand. Each environment I uncover feels unique, and I love the way new abilities tie into the world around me. I sometimes find the glowing orbs that work as the game’s currency, which I can then take back to the village to buy optional skills.

These skills are important for expanding your options in combat, which plays a larger role in Will of the Wisps than it did last time around. Attack options in Blind Forest were minimal, designed primarily as a way to keep you airborne. The options at my disposal have been significantly expanded this time around. I can perform a lock-on bash through an enemy, smash them over the head with a hammer, dash, double jump, hit an opponent with a fireball, etc, all without ever touching the ground.

Combat feeds into movement and movement feeds into combat; it’s hard to separate the two when discussing how the game feels to play. This works well, but it’s unfortunate that, to play to this strength, Will of the Wisps favors traditional boss fights instead of the lengthy, exhilarating platforming sections from Blind Forest. It feels like a small step backward in a game that’s so inventive in other areas.

Will of the Wisps loses a bit of Blind Forest’s clear identity by adding so many new systems. Moon Studios’ first game zeroed in on precise platforming and focused on executing that idea nearly perfectly. But this follow-up has so much more: acrobatic jumps, robust combat, multiple upgrade systems and plenty of side quests. Each aspect of the game is done well, but I sometimes missed the focused, elegant design of the first game. 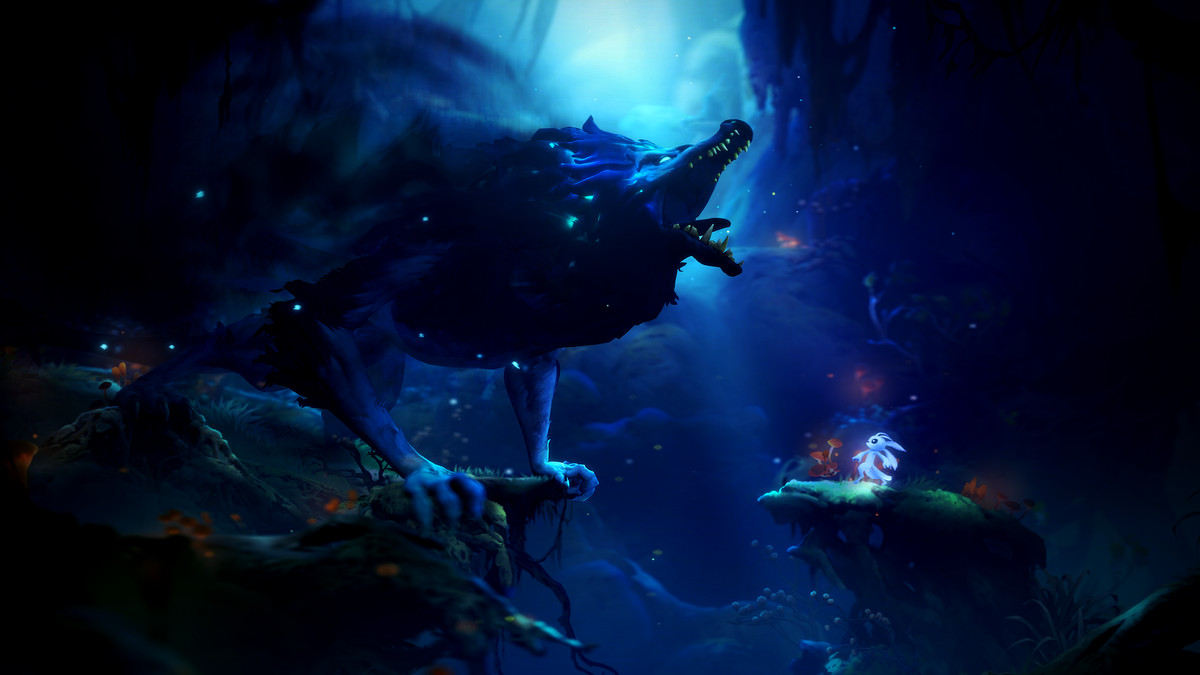 It doesn’t help that the game’s performance often feels like it’s creaking under the weight of all that content. In its pre-release state, Ori and the Will of the Wisps had persistent, crippling technical issues when played on Xbox One S. Those issues impacted the game to such a degree that we didn’t feel comfortable reviewing it until the day-one patch arrived. The good news is that, by and large, those issues are no longer present.

Last night, as I replayed the hours that I lost while playing the bugger, pre-release game, I no longer lost my saved games. There is still some occasional dips in framerate, and the hitches struck at unusual times — not during a frantic boss fight, but, rather, during slower exploration segments out in the world. There are other, small issues with load times, but the game is now significantly more playable than the version I had originally tried to review.

Ori and the Will of the Wisps offers a gorgeous world to explore and a varied, creative series of abilities and tasks that guide my exploration and help me see more of this wonderful place. It expands my options in combat and offers me more to do, and mostly benefits from that added complexity, while losing some of its focus in the process. Overall, however, it’s a worthy trade off.

Ori and the Will of the Wisps is a vibrant platformer, and I’m so happy the technical issues from the pre-release version continue to be worked out so more people can enjoy its vision.

Ori and Will of the Wisps is out now on Xbox One and Windows PC. The game was reviewed on Xbox One S using a download code provided by Microsoft. You can find additional information about Polygon’s ethics policy here.