MotorStorm: Pacific Rift Has The Best Race Tracks In Gaming

I love arcade racing games. I love the cockpit view in Need For Speed: Shift, and how the series was inspired by the Fast and Furious films. I also love the destructive ones like Burnout, the Sci-Fi ones like Wipeout, and the party ones like Mario Kart. Some focus more on the cars, some focus more on the race tracks. While these games have some truly iconic levels, MotorStorm: Pacific Rift is the undisputed king of race tracks.

Pacific Rift gave us an entire island to race around, with tracks ranging from down in the mud and the surf to high up in the mountains skimming clouds or catching fire around active volcanoes – it doesn’t get much more epic than that. 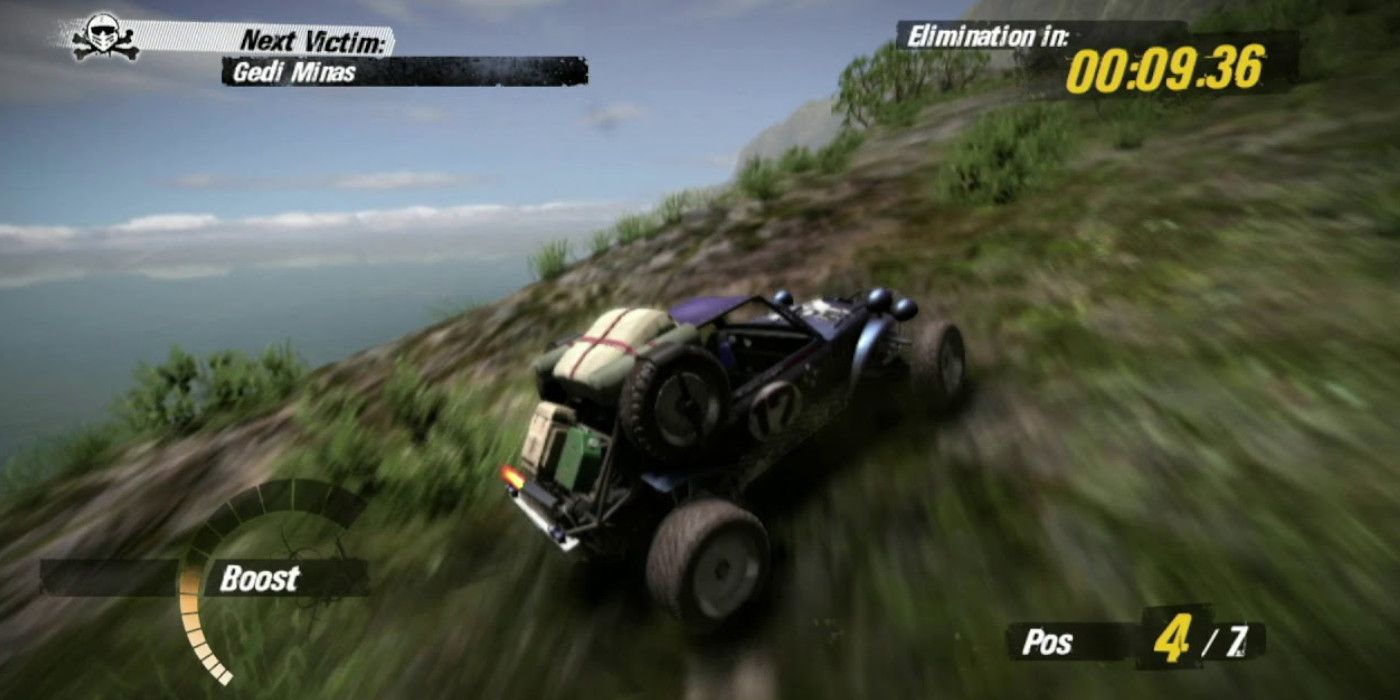 Something that helps the tracks in MotorStorm stay varied without being confused is the element system. Air tracks are all about big jumps, steep hills, and sheer drops. Water tracks feature some serious racers-gone-wild wetness – you drive through rivers, waterfalls, and along beaches. The fire tracks will scorch your engine and cause fires to appear on your sleeves and the bodywork of your car as you skirt around lava pools or jump over firey craters. Finally, earth tracks send you deep into the jungle and feature the best kind of mud wrestling – the vehicular kind. No matter what type of track you’re on, you’ll get a mix of all of these things – well, maybe not lava, but jumps, mud, and water for sure.

There are Pacific Rift tracks that still appear in my dreams, 13 years after the game’s release. Aptly titled The Edge features a circuit along perilous cliffs.  You skirt around the edge of the track with nothing but sea and rocks below you, taking colossal jumps that shake the screen when you land. What makes this track so spectacular is the ability to shunt your opponents. In a lorry and spot a rally car trying to overtake you? Nudge that bastard off the edge and into the drink below. A motorbike trying to undertake you? Slam them into the cliffside and put them out of business. A friend and I invented a sport on this track: Big Rigging. We’d set all the opponents to Big Rigs and try to explode them off of the cliff edges. We weren’t allowed to shunt them, only boost exploding them over the edge would count. How many games can you do that in, huh?

Of course, the ability to choose from a variety of vehicles adds hugely to the replayability of each race. Each track has several different routes through it, each designed for a certain class of vehicle. Lighter automobiles and bikes can take the high roads to avoid the heavier beasts below. Duck under branches and hop over gaps elegantly as the big boys battle it out below, or jump into a Monster Truck and plow straight through the middle of the track, crushing your competition underneath you as you do. 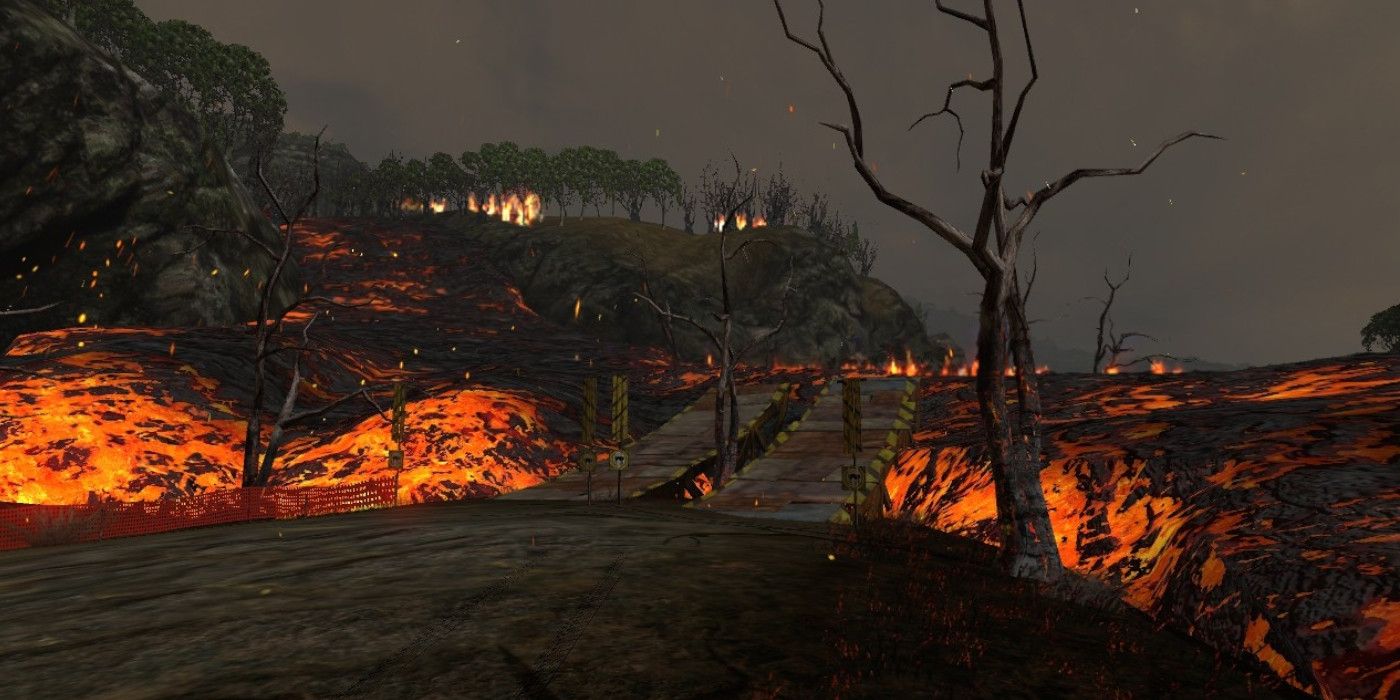 Another track that holds a dear place in my heart is Wildfire. You start by racing along a coastal cliff as a slow deluge of lava creeps towards the sea, squeezing the track as it does. One incredible detail here is the bystanders wearing heat suits to protect them from the molten earth. As you jump over streams of lava, steam erupts from the sea where fire meets water. You cut back inland and over more lava, where the MotorStorm festival organizers have shown mercy and set up several sprinkler cages to keep your car cool as you race.

I could honestly go on and on about my favorite tracks in Pacific Rift, so I will. Cascade Falls is a water track that combines huge jumps, beautiful waterfalls, roaring rivers, and a wall of death on the final corner. Getting through this track on a Motorbike unscathed is a true challenge, one I often try just for fun. Take a bigger vehicle and you can actually do about a fifth of the track just in a river – it keeps your engine nice and cool so you can boost through it for ages. One track has you race through an old sugar plantation full of disused machinery and crumbling warehouses. If you’re in a big truck, you can smack the claw of a digger so that it spins around and knocks bikers right off their mounts, it’s hilarious.

Pacific Rift really understands what it’s trying to be: a fun, frenetic, chaotic game where you fight the track just as much as you fight the other racers. Where it succeeds over other games, for me, is that while the tracks can be tricky, they never feel unfair. If you take a jump at a bad angle and send yourself flying off into a ravine, it’s because you messed up the angle. Equally, you can use the tracks to your advantage, by picking small vehicles and taking shortcuts or large ones and going through streams and mud, or by knowing the best place to sideswiped an opponent so that they go crashing into a rockface or melting in some lava. I really, really hope we see a new MotorStorm game soon, or a remaster of Pacific Rift.