“Because you don’t know us at all, we laugh when old people fall.”

The lyrics to Sum 41’s “Fat Lip” weren’t exactly appreciated by the older generation (aka my parents) when it was released in 2001, but as a teenager who had just completed his freshman year of high school, I couldn’t get enough of it. “All Killer No Filler” was essentially the soundtrack to my summer that year, and “Fat Lip” was my summer anthem. It’s also a song that I had on repeat in my head while playing Just Die Already, from developer DoubleMoose.

At least on my timeline, the discourse surrounding the game when it was announced wasn’t exactly glowing – mostly because of the game’s focus on the brutal treatment of senior citizens. Admittedly, though, I couldn’t help but be intrigued watching these old folks run amok in an open city and occasionally getting dismembered and decapitated. It looked funny and frantically over-the-top, and that’s exactly what translated to the first few hours of the game. Unfortunately, the novelty wore off pretty quickly. And despite the game’s attempt at keeping things relatively fresh with online play, it didn’t exactly pan out like I’d hoped it would. 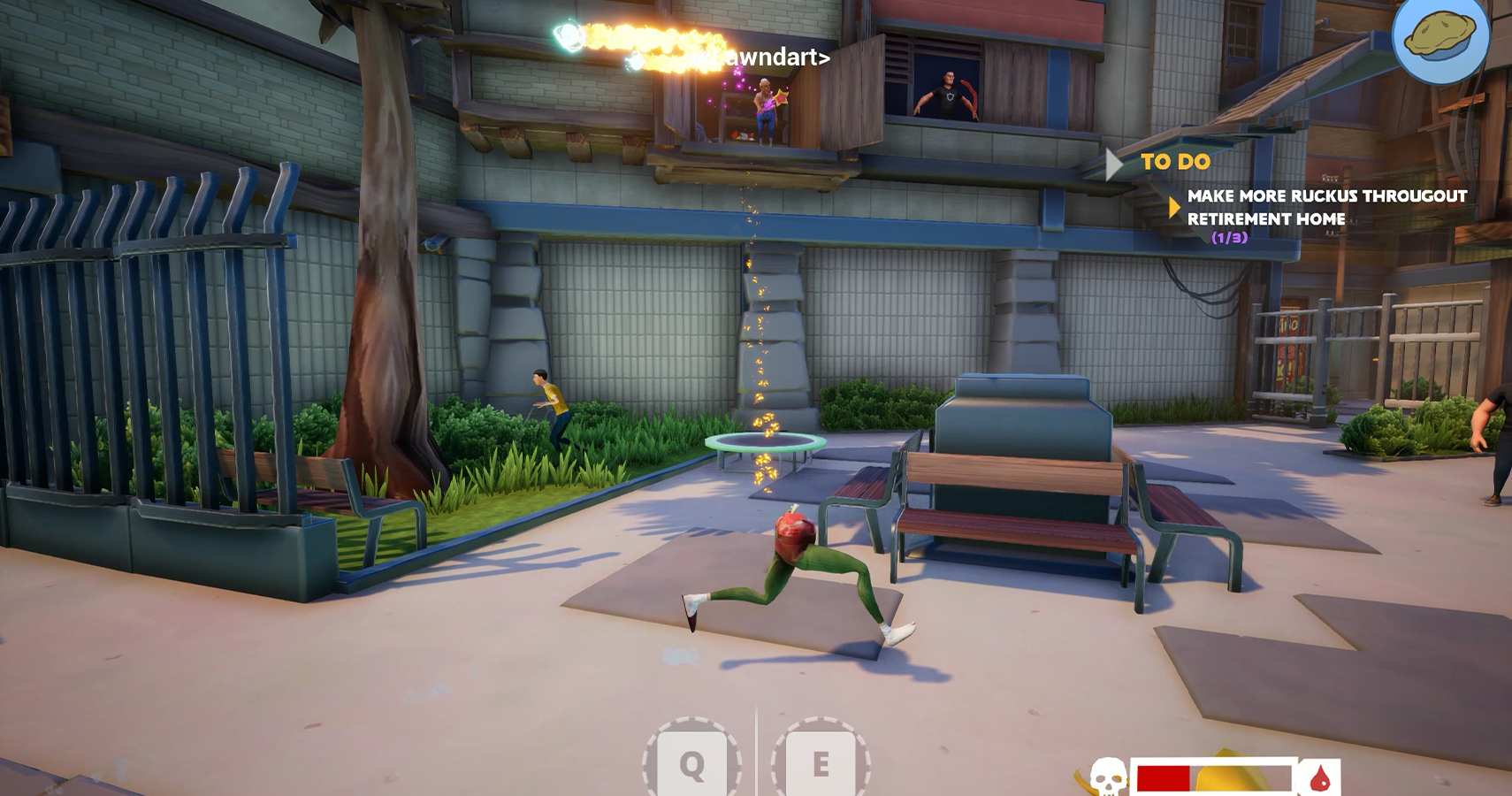 Let’s start with the basics, though, since the gameplay itself is fairly simplistic in its foundation (despite all of the utter chaos that ensues almost constantly). You select from one of four geriatric characters and are set loose within your retirement home that could easily be mistaken as a prison to a passerby. From the stove to the piranha-filled fish aquarium, pretty much everything in your apartment can kill you – and it will, as you explore the various rooms looking for a way to escape. Once you finally manage to find your way into the common area, you’re tasked with finding a way to escape the retirement home itself – permanently. From there, you’re off on a grand adventure as you explore a city that loathes old people. And just like your apartment, almost everything is out to get you.

Just Die Already is described as an “old people mayhem sandbox game”, and that’s a pretty apt description. The game is from the team behind Goat Simulator, so if you’ve played that, you’ll have a pretty good idea of what to expect here. Almost everything is destructible in one way or another, which ultimately means that you can be killed in a myriad of different ways. Obviously, things like garbage crushers, loose electrical wires, and oncoming traffic are things that immediately scream, “You’re probably going to get hurt very badly if you interact with me.” It’s the other more subtle things in the area that might sneak up on you when you’re not expecting it. That stationary barbell and weight bench? Best to just steer clear of it altogether. The lovely river that runs through the canal of the city? There are sharks in it, because of course there is. Therein lies probably the most frustrating factor in this game. Everything can hurt, maim, or kill you. 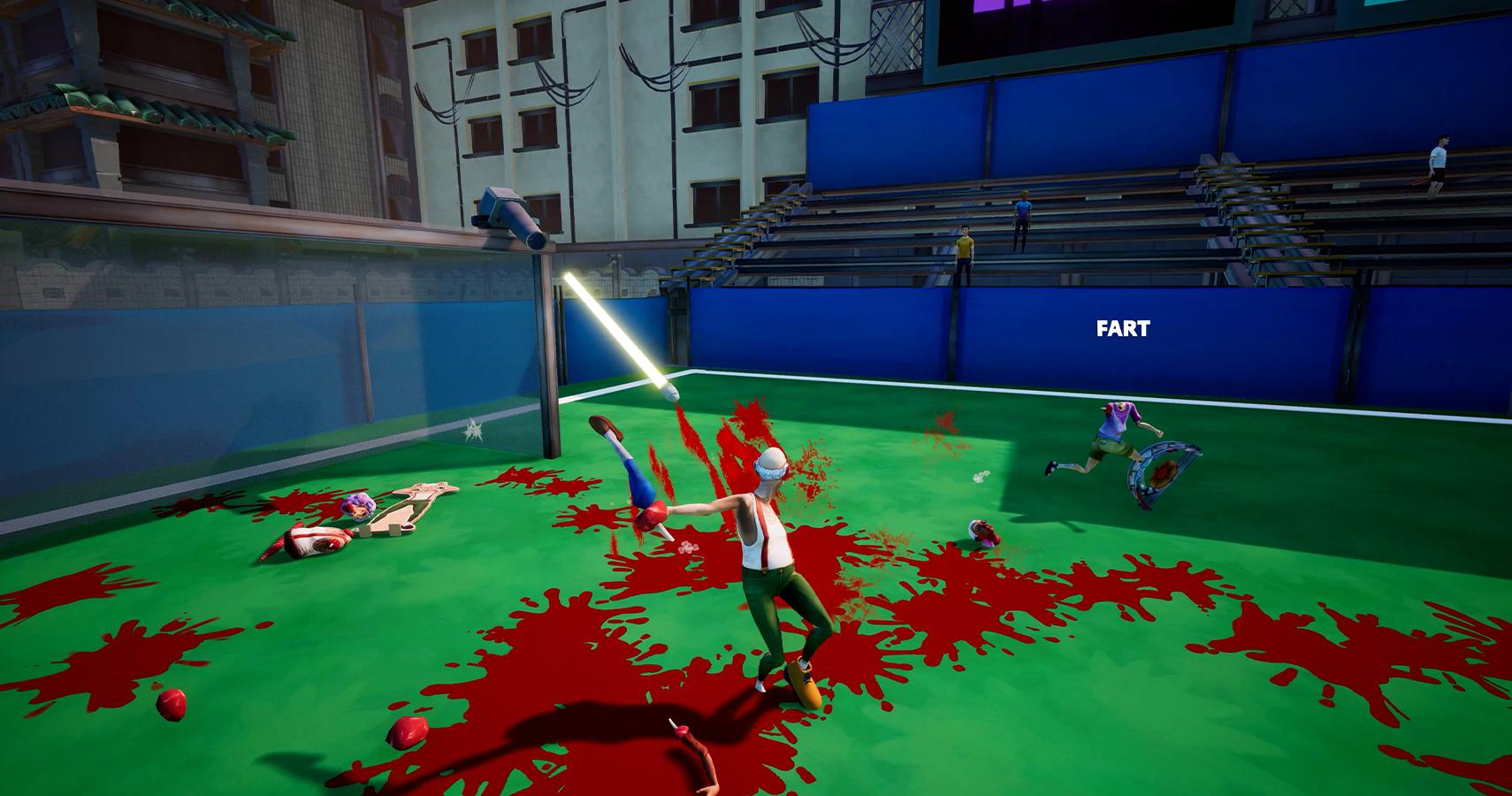 That’s really not an exaggeration. That aforementioned barbell? It can literally decapitate you if you walk into it just right. At the very least, it’ll tear into you and cause you to start bleeding profusely. If you graze a window or glass bottle ever so slightly, you’ll end up with shards that protrude from all of your extremities until they wind up getting cut off altogether. Even though you can still run around without a head, or even roll around the streets as a torso, the sensitivity of interacting with anything in the environment can be excruciatingly frustrating as you try to progress through the game, completing tasks on your bucket list. Sometimes, my character would straight up explode from getting punched by a security guard. It made no sense, but I think that’s part of the attempted charm.

After all, your bucket list tasks aren’t exactly ones that I’d be chomping at the bit to complete just prior to passing away from old age. Get electrocuted 50 times? No thanks. Knock over a bunch of trash cans? Seems unnecessary. Hit someone with your decapitated head? I’m sorry, what? Do literally anything sports-related that requires the slightest amount of skill? Not with this control scheme.

Besides the fact that you’re about as fragile as a paper-thin slice of sugar glass, the controls in Just Die Already made me want to do, well… exactly that. The control scheme is hard. The standard WASD keys are simple enough, but grabbing and ungrabbing objects with Q and E can be tricky. Timing a throw properly is nearly impossible, with much of my success coming down to dumb luck. Couple that with the overly dramatic ragdoll physics, and you have a recipe for disaster. Again, I think there is a charm in this setup with regular movements being harder for senior citizens in real life, but boy, I hope I’m never in as bad a shape as my character was in this game.

There’s an online component in Just Die Already that allows you to play with other people, including a cross-play function. Unfortunately, I was rarely able to even connect to a game. When I did, there was so much lag and stuttering frames that it was unplayable. A new PVP mode is slated to make its way to the game later this summer, so hopefully, more stability will come to online play as well.

Just Die Already has its charms, but the novelty wears off pretty quickly. I’d even go so far as to say this toes the line with the masocore genre. It’s a difficult game, but I did find myself chuckling often at the utter ridiculousness that I was witnessing. I could see it being a fun game to casually stream with an audience.

A word of warning, though. Maybe it’s the fact that I’m in my mid-30s, but after spending time playing Just Die Already, my social media timelines all of a sudden started showing sponsored ads from AARP and other companies that advertise to an older demographic. Now, I just want to watch some Lawrence Welk and put some Werther’s Originals in a candy dish on my coffee table. Get off my lawn.