Regardless of my bad history with the rocky writing in some free-to-play titles, I’ve never tuned out during a Genshin Impact cutscene. From the beginning, my introduction to the towering church of Mondstadt, the brilliant beachfront of Liyue, and the early showdown with the otherworldly powers of Stormterror kept me glued to every new story detail, big or small. If you give its cast a chance, Genshin Impact is a treasure trove of loveable, complicated characters steeped in intrigue and mystery that’s kept me hooked for months now. And while I understand not everyone has the time to engage with every little side story, I’ll recommend and sing praises for Ganyu’s short tale any day.

Ganyu is everything I want to be and strive to become while simultaneously a cautionary tale. There’s nothing about Ganyu’s lifestyle we should try to emulate, but she’s lauded for it amongst her peers. She’s a highly productive, talented, and incredibly anxious secretary and emissary for the Liyue Qixing—one of the most influential organizations in Liyue, and in Teyvat too, for that matter. Thanks to her abilities as a half-human, half-adeptus, Ganyu is thousands of years old, and has served as a guide to humanity for centuries. 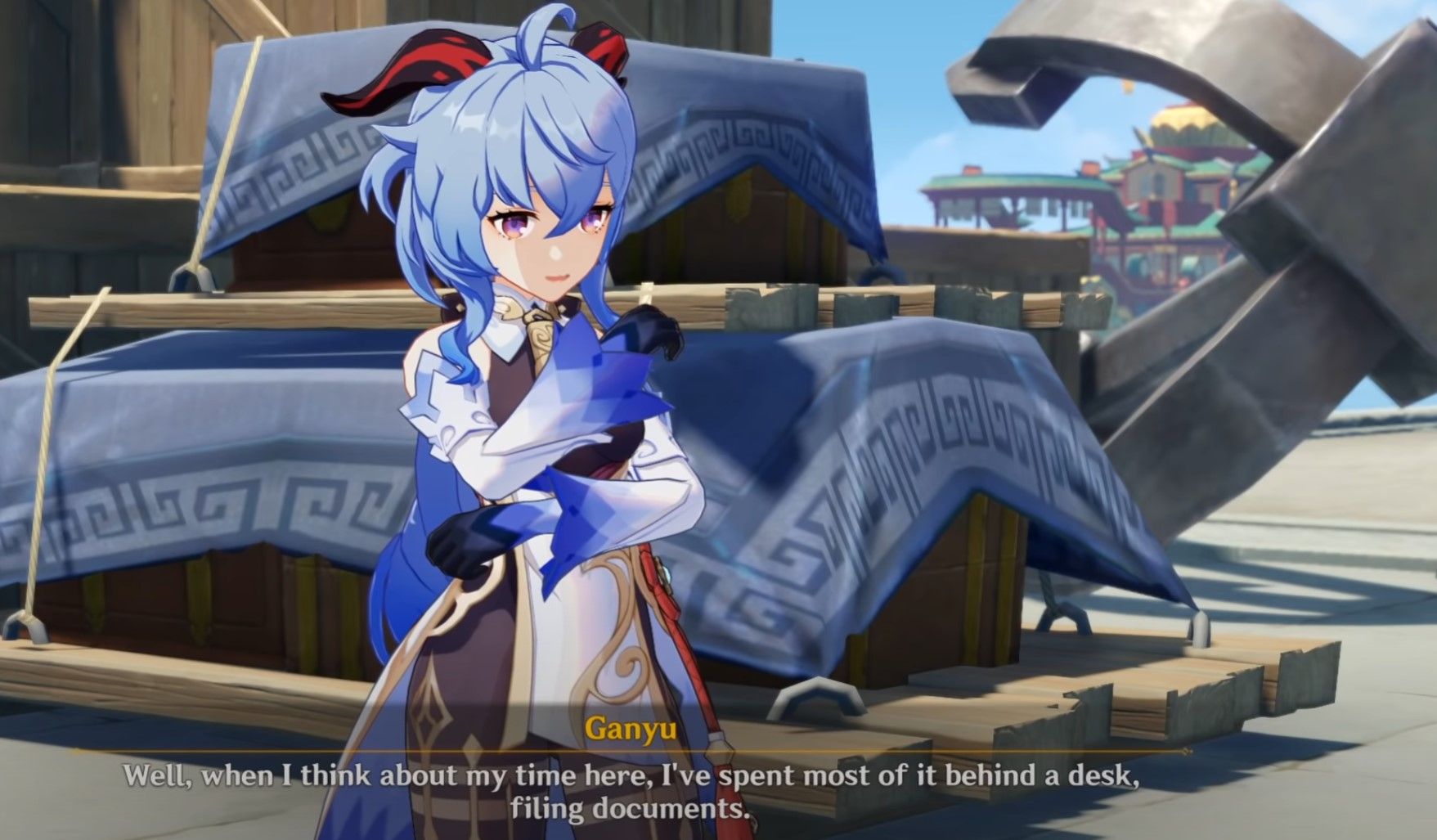 And it’s that very mix, the cross between human and adeptus, that sends Ganyu spiraling in her Genshin Impact side story. Adepti tend to isolate themselves far away from the lands humans wander, but Ganyu herself resides amongst them. In her small moments of doubt, when she fumbles and makes a mistake, Mihoyo gently reveals that these internal struggles — these feelings of being misplaced and misunderstood — wear on her over time.

But Ganyu beats all of that back. You can see in interactions with her early on in Genshin Impact’s main questline that there’s a little something always gnawing at her. She’s the relentlessly anxious friend, the one who’s somehow always seconds from a breakdown but keeps it together to see another day, or in Ganyu’s case, thousands of years.

When meeting up with Ganyu in the first act of her chapter, Sinae Unicornis, it’s clear she’s beginning to crumble. Everything begins with a frantic search for the goat-like girl, as it seems she’s abandoned her post at work, and the other secretaries are lost without her. Unable to handle Ganyu’s workload, they ask the Traveler if they can find Ganyu and bring her home. It’s a frustratingly human moment, and there’s obviously concern for Ganyu’s well-being there, but the trio is ultimately still more concerned about the workload than they are about where she’s run off to. 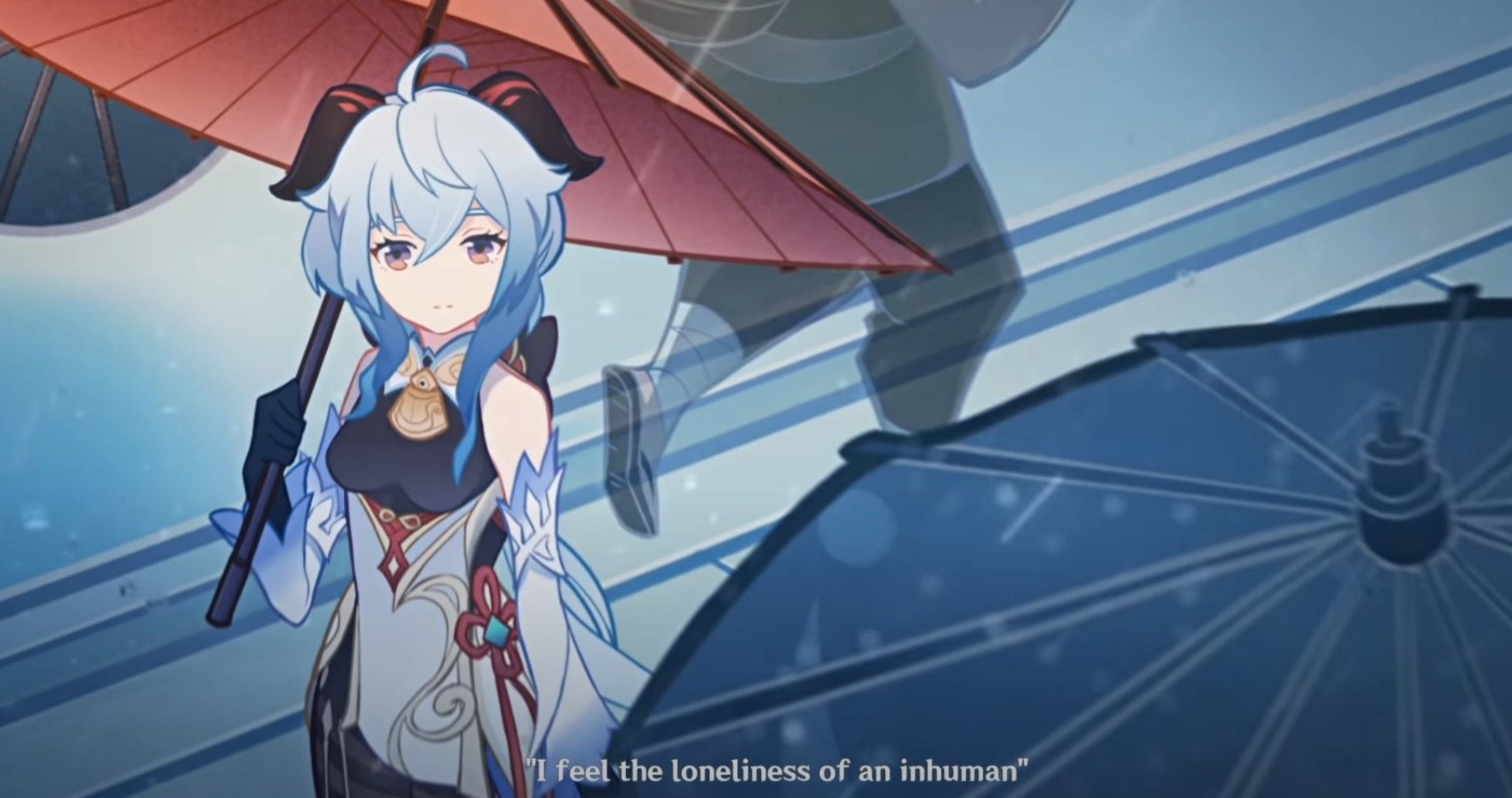 When you finally find Ganyu, she’s tucked herself away at Jueyun Karst—the mountainous home of the adepti. Ganyu reveals that she doesn’t particularly feel welcomed anywhere, and it’s clear the painful grind has taken its toll. After some back and forth, the Traveler convinces her to go back to Liyue and be amongst the humans again, and I felt that pang of not knowing whether it was right or wrong. Ultimately, Ganyu seems unhappy in both places, and deserves a shot at living for herself.

Later on, when the revelation hits her that she longs for a little more freedom, the chance to have a life she’s had no experience with, even after thousands of years, there’s a bittersweetness and hope she’ll keep good on her promise to herself. Ganyu wants to be someone who travels, she wants to be someone who isn’t dominated by their commitments and work, but that’s not the front she continues to perform.

In a game with a larger-than-life cast, full of mystique and magic, Ganyu is painfully so many of us. Even after living countless lifetimes, she could never find time to love herself, time to take care of Ganyu. We don’t have that long, and the older I grow, the more I wish I’d worry a little less about how productive or successful people see me as. I want to be Ganyu, and I don’t really want to be Ganyu. Her moments are some of Genshin Impact’s best, and if you can only make time for a few of its lengthy sidequests, at least make time for the tragic and admirable secretary of the Liyue Qixing.