Fire Emblem’s Manuela is a messy woman, and it’s inspirational

There’s this scene near the end of Greta Gerwig’s Little Women that sticks with me, months later; it’s probably the most famous part of the 2019 movie. In it, an exasperated Jo March (Saoirse Ronan) — who has spent the movie paving her own way as a writer — tells her mother that she’s tired of fighting against the belief that women are only meant for one thing.

By this point, Jo is nearly out of breath. She takes a beat, composes herself, and then admits there’s a price to believing what she does, given that she lives in a society where women are bound by strict gender roles.

“But … I am so lonely,” Jo trembles. Being fiercely independent has left her alone. By the end of the movie, we have no idea if the happily-ever-after she poses to the audience is real, or made up to satisfy her publisher. And truthfully, as a woman who has prioritized my career and personhood over most things in my 20s, I’m afraid to know the answer.

People love to quote this scene, but only the first part. The part that positions Jo March as an independent badass, the part you can thump your chest to — that’s what you’ll see everywhere. That last excruciating wrinkle is left out, even though it might be the truest part of the entire thing.

Big-budget video games often do the same thing, at least in spirit. If you play as a woman, that woman is a badass, often barely indistinguishable from her male hero counterparts. Sometimes, if you’re given a choice between a male and a female protagonist, that interchangeability is literal despite the fact that we sometimes aren’t treated the same way by society. Love and its pursuit is often not a central part of the equation, because who wants to play as someone who feels lonely? Nathan Drake can have a wife; his tale seeks to answer the question of whether the adventurer is capable of true intimacy. But Lara Croft, she goes into the wilderness alone. Always alone.

Surprisingly, the closest Little Women parallel I’ve experienced within video games is 2019’s Fire Emblem: Three Houses. On paper, Three Houses is a tactics game where you attend a prestigious school. In practice, it is a game largely about class, the complexity of gender roles, and how those factors intersect to make successful women lonely. Students of all stripes attend the academy, from commoners to nobles, and the existence of power-granting “crests” stratifies these groups even further.

Much of the game is spent getting to know your cohort, which includes a set of professors with different specializations. Manuela, a songstress and healer, has a storyline that almost entirely revolves around her love life. What that looks like depends strongly on who interacts with her. At first glance, Manuela’s desire to find a man almost reeks of desperation. Your introduction to the opera singer — at least as a male protagonist — is flirtatious in a way that almost makes Manuela seem lecherous.

During your first private conversation with Manuela, she is a hungover mess who can’t even find her underwear. You are there to deliver a message from an unseen knight who rejects her. “We will never go out together again,” he says, immediately painting Manuela as the unwanted woman.

Manuela takes this hard, because it’s not an isolated rebuff. “I’m completely worthless as a woman … I’m going to be single for the rest of my life,” Manuela laments. “I just know it.”

The curious thing about this characterization is, Manuela is technically a catch. Prior to her stint at the academy, she was a world-renowned opera singer with an illustrious career.

“I’m the songstress who swept the Empire off of its feet … men professed their love for me hourly!” she exclaims to the player, enthusing that men should be begging for her attention.

We never get to see Manuela’s glamorous side, but when she’s in battle, her capabilities speak for themselves. In my game, Manuela was my go-to healer. By the end of my journey, I had turned her into a Mortal Savant who could cut down foes with blades and magic. I’d send her off in any given map by herself, confident that she’d be able to take on whatever came her way. She always did, too.

Whether or not Manuela is truly recognized depends on who you speak to. The men in particular always seem to boil Manuela down to her flaws, or they don’t take her seriously because of the type of woman she is. Manuela — according to many of the men, anyway — deserves to be alone. 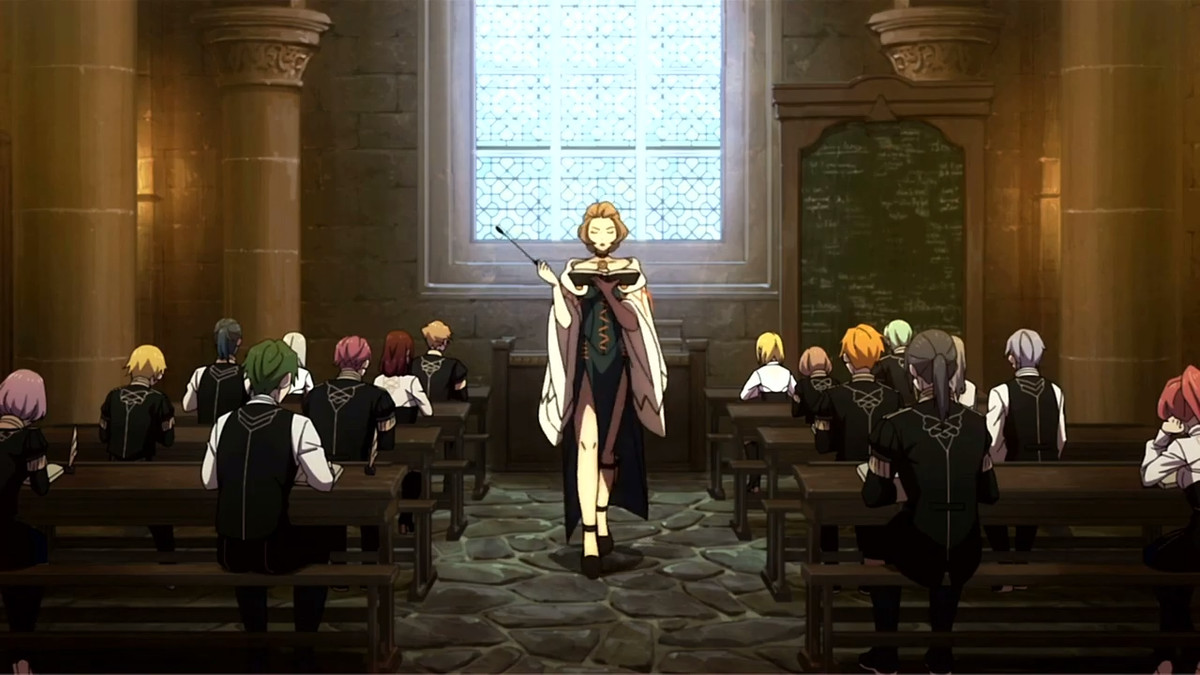 When she speaks to Seteth, a fellow teacher, he calls her drinking disgraceful. Hanneman, another colleague, has an almost entirely antagonistic relationship with the songstress, at times calling her “insolent” and “insufferable.” Alois, a clueless older knight who seems fond of gender roles, largely uses Manuela to help him find gifts for his wife and daughter. Gilbert is perhaps the adult who is nicest to Manuela, but the game doesn’t allow you to deepen their relationship very much.

Manuela can improve her standing with some of her colleagues, but she often has to fight against prejudices that arise because she’s sexual and not traditionally feminine. At times, she has to pester or force the men into spending more time with her.

“I’ve no idea what parents teach their kids, or why they even have children at all,” Manuela says to Gilbert, during one of their exchanges.

The younger male students aren’t much better. Ferdinand, a noble, admires Manuela. Yet he infantilizes her by continually referring to her as a princess. Lorenz, a member of the Golden Deer, tries to avoid Manuela, at one point remarking, “If it weren’t for her drinking, and her woefully inadequate manners, she would fit right in with high society.” Cyril, the youngest student of the bunch, often dreads interacting with Manuela because it means having to listen to more stories of heartbreak. As she pours her heart out to him, Cyril suggests that Manuela drives men away because of her drinking. Sylvain, the womanizer, is the only one who tells Manuela she’s a catch … but the problem is that he says that to every woman, sometimes word for word.

“No one sees the person behind the voice,” Manuela laments. “They just see me older today than yesterday. They say, ‘Oh, look what happened to her.’ Nobody sees my frustration.”

This is largely true of the men, but when you speak to other women, Manuela’s story is wildly different. Where the men see nothing but a lazy, unkempt woman who is divorced from her accomplishments, the women look up to Manuela, often wishing they could be more like her.

Edelgard, the future emperor of the Adrestian Empire, still remembers watching Manuela perform in the Mittelfrank Opera Company as a child. Manuela tells Edelgard that while she could have stayed onboard for a couple more decades, she left while still at the top of her game.

“My voice is a gift from the goddess,” Manuela remarks. “However, as all things do, it will decline with age. One day, I will lose that gift. […] And so I decided I needed to learn to survive without it, long before my day came.”

With this kernel of history, Manuela’s pursuit of love takes on an entirely new undertone. Sure, she was successful and beloved by the country before her time at the academy. But that worth is tied to her age and beauty; once that’s gone, she has nothing. How do you secure your future in a world that limits your worth?

It’s a thread that Three Houses explores further through Dorothea, a commoner who follows in Manuela’s footsteps. Like Manuela, Dorothea becomes an opera singer — actually, she pursues the career because of Manuela, whom she considers her idol.

“When you retired, it broke my heart,” Dorothea tells Manuela. “But it also woke me up. Seeing someone like you, who shined so brightly on the stage, give it all up and start a new life. It got me thinking about my own future, and what I wanted it to look like. As ever, I followed your lead.”

Dorothea, we come to learn, came to the academy not just because it could renew her career — but also because she knew that well-off heirs would be in attendance. She is in school to secure her future through marriage, making her closest Little Women parallel the pragmatic Amy March. Dorothea knows how this world works, and it allows her to see Manuela in a different light than the men do. She doesn’t care that Manuela drinks; this flaw doesn’t reduce the songstress in the slightest to her.

And as it turns out, Manuela has a reason to drink. It’s not because she’s rejected left and right, because — as we learn in Dorothea’s interactions with her — Manuela already had a reputation as a lush during her time with the opera company.

In conversations with Flayn, an innocent girl who doesn’t know much about the world, Manuela reveals that her success did not come easy. Training for performances, we are told, began at sunrise and was “grueling.” Once the shows started, Manuela would do three “exhausting” performances a day. But that wasn’t the worst of it.

“Here’s the thing about the opera,” Manuela explains. “Talent isn’t enough to earn you a position in a glamorous show. You need money, connections, and — failing those — the stomach to commit a spot of violence.”

Later, after telling Flayn that she had to claw her way into every role, Manuela reveals that becoming famous meant degrading herself for a shot at the limelight.

“I spent many nights buttering up nobles in power,” Manuela says. “No matter how humiliating the task, I’d do it. Because I wanted to be a star.” Flayn gets it, though. She responds by telling Manuela that, sometimes, survival means doing things you don’t want to do. This is especially true for women in this world, who don’t have nearly as many choices as men. 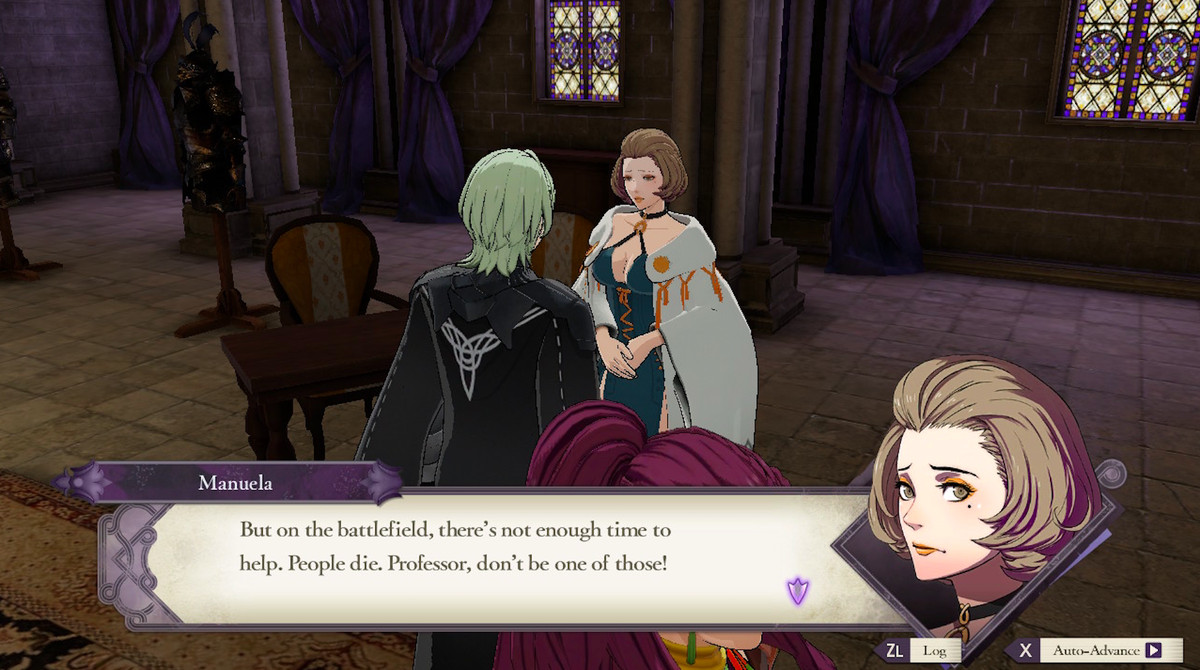 But even if this weren’t true, I’d find it hard to judge Manuela. Part of that comes from playing through Three Houses, and knowing how grueling it is to have to kill former friends and allies to finish the game. We don’t really see this, but you have to imagine that as the healer of the academy, Manuela has to deal with the brunt of this reality. I’d drink, too. Plus, as much as the men want to belittle her search for love, given the heights she’s reached as an opera star and top professor, what else is there to strive for but intimacy? Jo March isn’t less than because she longs for a man in her life. She’s just human.

Mostly, though, I appreciate that Manuela can be a mess in the first place — that she cannot be boiled down to just “good” or “badass,” though she is also both of those things. When I think about women in media who stay with me, they are often not simple characters. It’s Cameron in Halt and Catch Fire, equally caustic as she is brilliant. It’s Starbuck in Battlestar Galactica, raging against her destiny. It’s Gretchen Cutler in You’re the Worst, nearly self-destructing in her mental health journey. It’s Quinn King in Unreal, building an empire at the expense of having a family.

It is a legion of chaotic, successful women who defy easy labels. Many of them don’t find love by the end of the story, at least during the parts that we watch unfold. But the fact I can see them at all, kicking and screaming against the current — that makes me feel a little less lonely, at least.