Home » News » Viscerafest Early Access Preview: Gibs All Around Me

Anyone connected to the retro shooter scene has likely heard of Viscerafest a time or two. Many YouTubers have covered the game and followers of indie developer Acid Man Games have had access to a beta demo for quite some time now. The game made headlines for its Cthulu-Esque heroine who devours the flesh of her fallen enemies while working as a mercenary to afford a wedding ring for her lover. It’s out there, to say the least.

Rendered in a pixel art aesthetic and borrowing heavily from the likes of not only classic Quake, but Hotline Miami, there are some interesting ideas going on in Viscerafest. You can bunnyhop at ludicrous speeds, swap weapons in an instant, and gib people across the entire room. There are some light platforming sections and the general movement is very fast. It has a ton of the hallmarks of 90s shooters.

What the game doesn’t really have is much in the way of accommodations for newcomers. You’re going to have to be very skilled to enjoy Viscerafest, at least on its middle difficulty setting. Born from the lead designer’s desire for more challenging games, nothing about Viscerafest jokes around. Enemies hit hard and fast and you’re often completely lacking in ammo to take on hordes of foes. 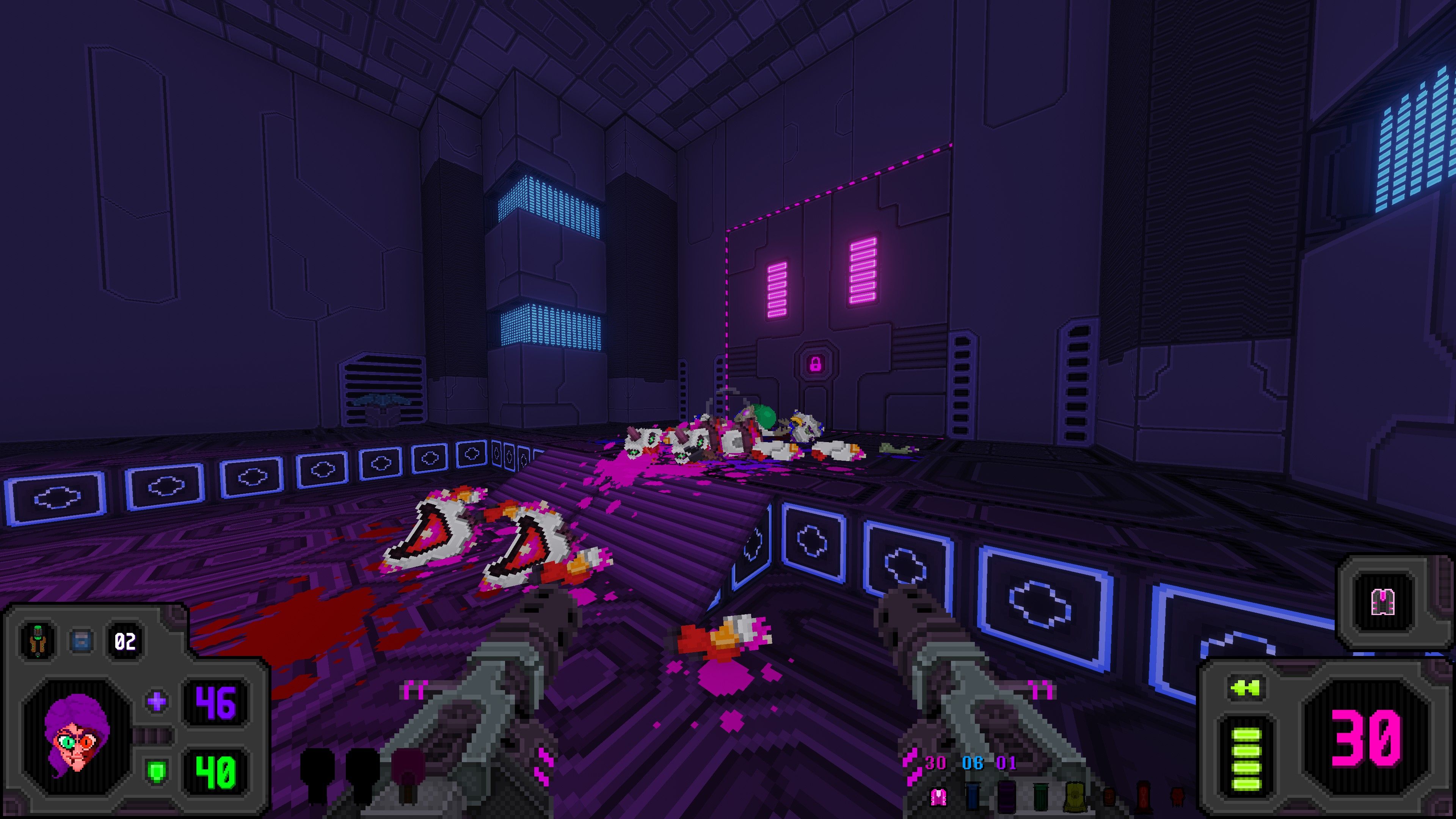 Let me dial things back a bit to explain my introduction to the game. Having played classic FPS titles for more than half of my life, I jumped into Viscerafest on its fourth hardest setting from the outset. After a brief cutscene giving you the setup, you’re thrown into a hub world reminiscent of id Software’s 1996 classic that lets you pick which episode you’ll be playing. Since Viscerafest is currently in early access, only the first is available here. Once you walk through the portal, you’re off to the races.

Starting off in a small room with only a pistol and no ammo, you’re tasked with walking through a few rooms before getting a taste of the gunplay. Textboxes detail the basic controls for you and you quickly come upon an NPC that will berate you if you point a weapon at him. You can either spare him or kill him, but there’s no morality system or anything at play. He basically exists as a means to get extra health, which is something you’ll be needing shortly. Grab the ammo, shoot the barrel through the crack in the wall, and then wind up dead from the ridiculously accurate enemies on the other side. It was definitely a shock for me.

I was able to eventually take out those foes, but it leads into my only real complaint about Viscerafest so far: there’s a surprising lack of ammo in this game. Main protagonist Caroline has an aforementioned desire for enemy flesh, so I understand that the game is pushing you to mix melee attacks with ranged weaponry. You take shots to weaken foes, then close the distance and punch them in the face. You can even charge your punch to deal more damage, but it doesn’t seem particularly balanced on the higher difficulties. Only being able to make progress to the third room, I had to swallow my pride and drop the difficulty to the third-highest to see more. 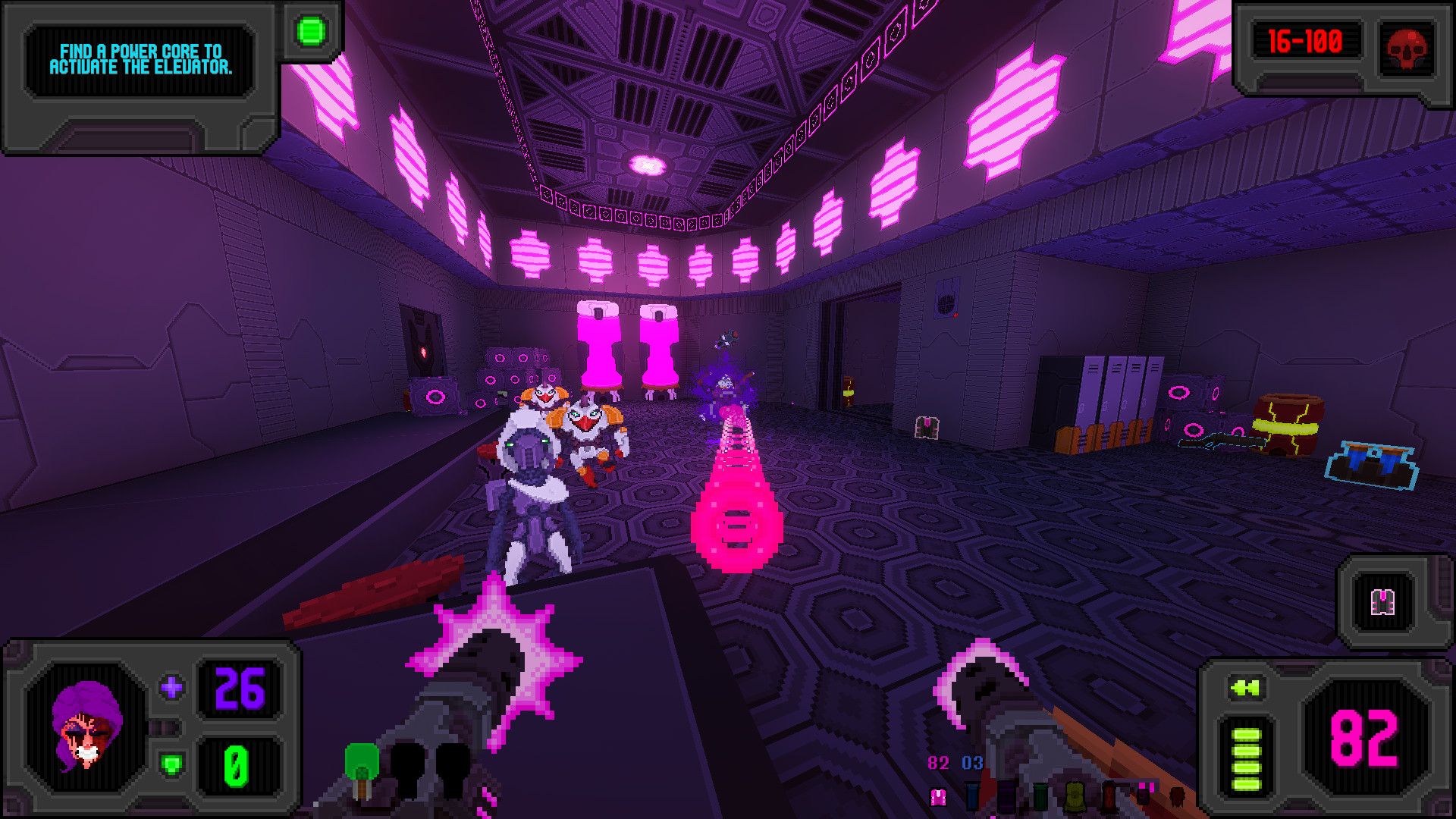 After doing that, Viscerafest felt a lot better. Enemies aren’t necessarily slower, but you aren’t dying in a few hits and it feels more akin to classic Doom. I’m guessing that things are balanced like Monolith Productions’ 1997 masterpiece Blood, but it made a bizarre first impression that took me a few levels to get over. Once I did, I began to see the specific charms Viscerafest has going for it.

The general level design here is that of bite-sized maps that can be completed in mere minutes. Not necessarily designed for speedrunning, Viscerafest challenges you to go farther with no real safety net to fall upon. You have a limited amount of quicksaves you can make to prevent things like save-scumming. Grab an item (called a save beacon) and you’ll extend that count by one.

I say mere minutes, but it’s unlikely you’ll blow through anything here. With the general lack of ammo and the enemies sometimes outnumbering you by quite a bit, you’ll absolutely hit roadblocks along the way. Some of the foes also do not telegraph their attacks all that well with brief and limited animations that seamlessly transition into attacks. It’s not impossible to overcome by any means, but it can take a bit of trial and error to figure out how to deal with them. 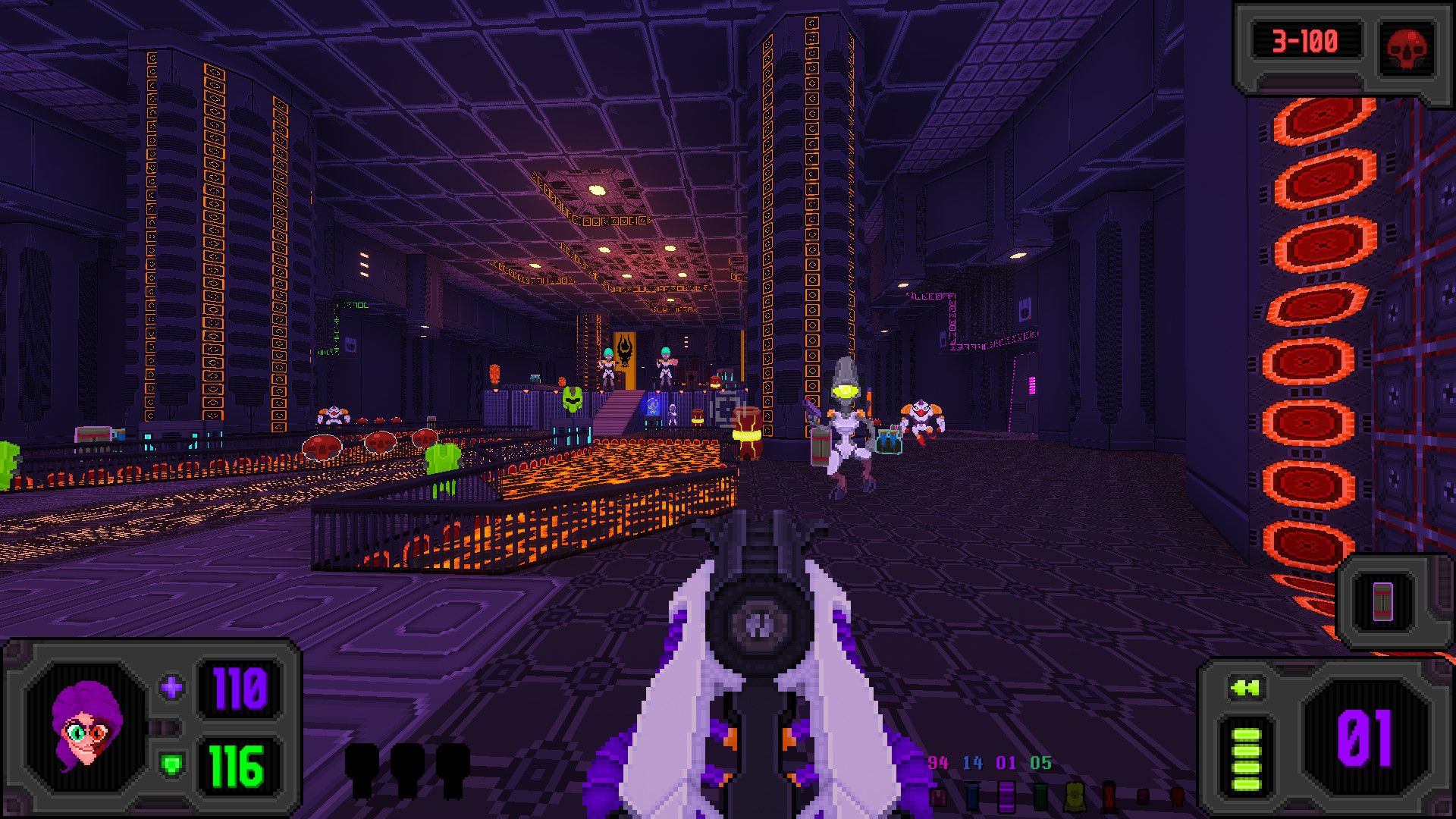 The weapons, when you do have ammo, seem promising. There’s nothing truly outstanding here, but the pistol, shotgun, double barrel, and even quad barrel feel good. There’s some slick animation for reloading and it’s always clear when you’re dealing damage to enemies. Where Viscerafest starts to get more creative is with its explosive firearms, which include a mine thrower and a gas grenade launcher. These have more strategic purposes than simply firing lead, though the levels are maybe a bit too short to make real use of them.

The enemy roster, as well, is a bit overwhelming. It could be because of my chosen difficulty, but you’re encountering some new foe on pretty much every level. One of the best aspects of classic shooters is that designers were able to hide different enemy types for later episodes in an effort to increase their difficulty curve. Viscerafest feels like maybe it’s giving up the ghost too early, but then there could be a potential horde coming in future updates. That said, all of the archetypes are here from melee only foes to brute force enemies. I really appreciate no one being a hit scanner, but then the fast projectiles nearly make up for that.

If this sounds overly negative, it’s simply because I feel Viscerafest has a lot of potential. What’s here is a decent foundation, but a few tweaks could turn Viscerafest into a solid retro title. The only other comparable game I can think of is High Hell, another ultra-tough, fast-paced shooter that relied on instant restarts and no checkpoints. Viscerafest already has more variety than that, it just needs to work on balancing its enemies and spacing out its arsenal.

Since a further two episodes are planned, there’s every chance this will grow into a retro shooter that can stand proudly next to the classics and its contemporaries. In the meantime, I do want to get back into things and kick some aliens around. Maybe I’ll finally conquer that fourth difficulty setting.