After the tidal wave of over 80 cards revealed yesterday, the second day of Magic: The Gathering's Commander Legends: Battle for Baldur's Gate spoilers feels a bit sparse in comparison. Just ten cards were shown off, But we still have some belters among them.

In today's highlights, we have a frightening new myriad commander, an uncommon reanimation powerhouse, a way to turn your commander into another Thassa, Deep Dwelling, and Gluntch. 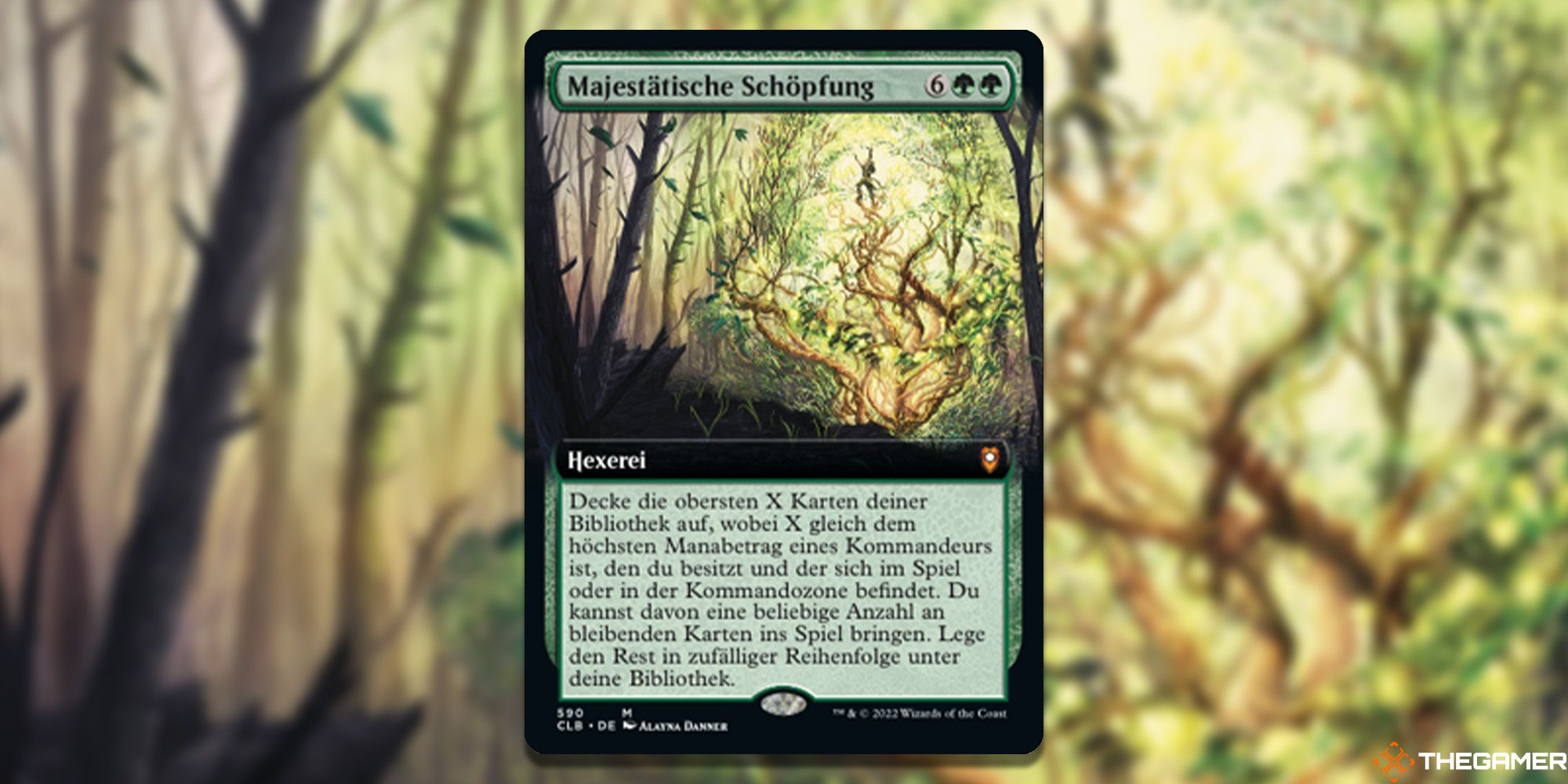 This is the perfect, high-mana value "battlecruiser" card for Commander. It's huge and splashy, and can cause some incredible moments in a game, but is held back from being overpowered by the high mana cost and need for your commander to be just as pricy for maximum impact.

You're not going to get much off of it if your commander only costs one or two mana (though you could still topdeck something spicy, it isn't worth the gamble of eight mana). On the other hand, If you're running anything that costs a lot and likes stompy creatures, like a Ghalta, Thrasta, Progenitus, or Gishath, Majestic Creation is going to be complete gas for your deck. You don't even need those commanders in play, they can be sat in the command zone while you dump your board full of the most expensive and powerful creatures possible.

Uncommon commanders often have a habit of being looked over in favour of their flashier rare and mythic rare counterparts. It's a shame because many of them have really interesting, decently balanced effects that are slightly outside of the usual commander design philosophy, like Viconia's.

Viconia isn't a reanimation powerhouse, as she doesn't bring things back to the battlefield and you have to jump through some hoops to make the most of her. But those hoops can turn into a huge advantage for graveyard decks, as they want to pull things in and out of their graveyards already, and are likely to meet Viconia's conditions. Syr Konrad the Grim is going to love this too, as you have a creature leaving your graveyard every turn.

Although Viconia has choose a Background, which lets you expand her colour identity with a Background, it's actually the mono-black backgrounds that seem to fit best with Viconia. Scion of Halaster will help you put those creatures into your graveyard as quickly as possible. Criminal Past buffs her up and gives you a sacrifice outlet. Criminal Past makes her stronger for all those creatures sat in your graveyard waiting to come back. 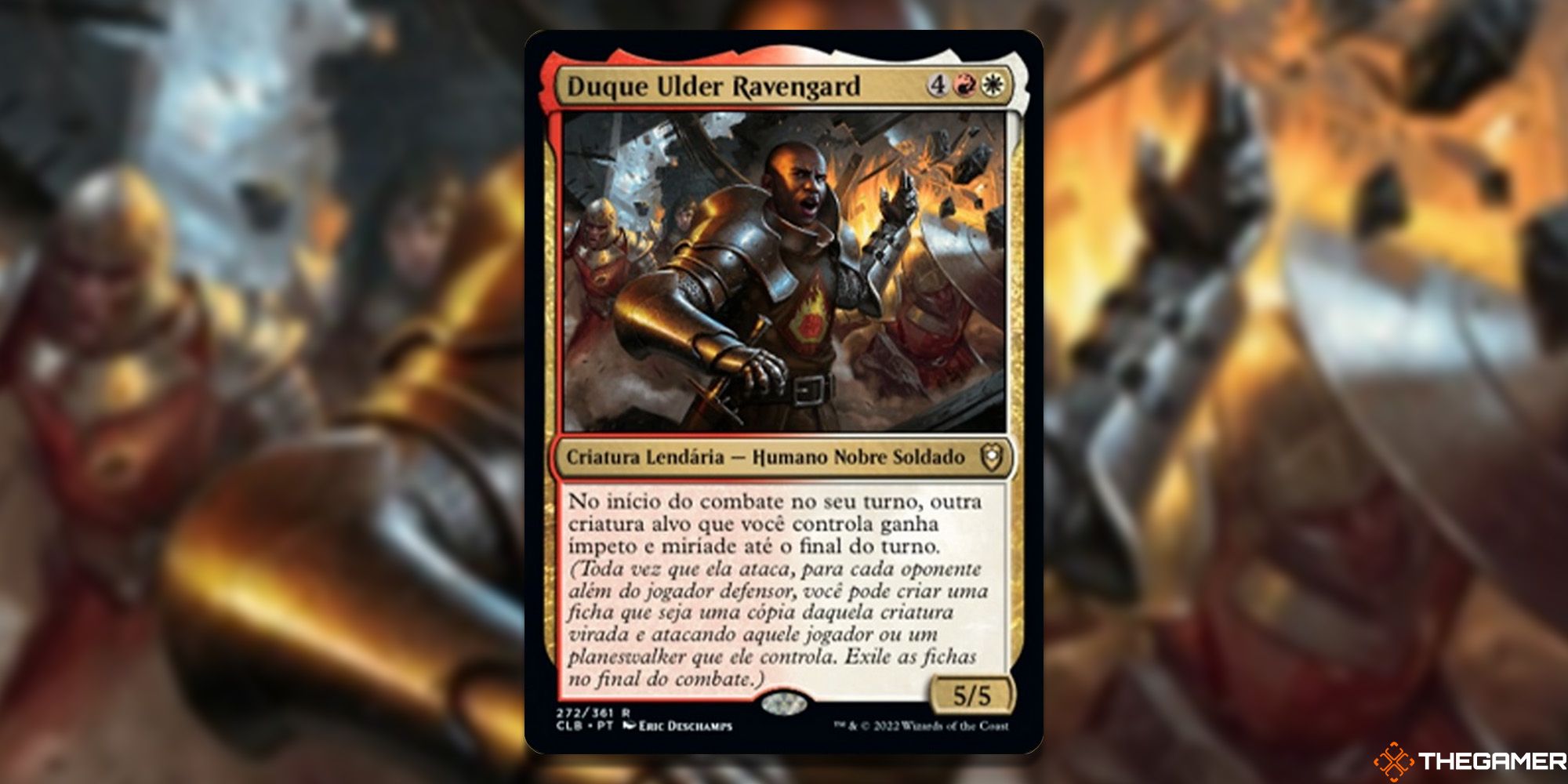 At the beginning of combat on your turn, another target creature you control gains haste and myriad until the end of turn.

A Boros (red/white) commander who cares about combat may not be the most original design ever, but the use of myriad makes Duke Ulder Ravengard a total beast. Whenever a creature with myriad attacks, you make a token copy of the creature that's tapped and attacking each other opponent at the same time. It's part of the toolbox Wizards is using to 'unjam' games, alongside goad and initiative, by allowing you to hit all three opponents simultaneously.

Other than the equipment Blade of Selves, we've not seen a card that can give any creature myriad like Ulder before. You could combine it with a creature like Goldspan Dragon or Dockside Extortionist to make lots of Treasures very quickly, or even something like Angel of Destiny to outright win the game by hitting every opponent at once. 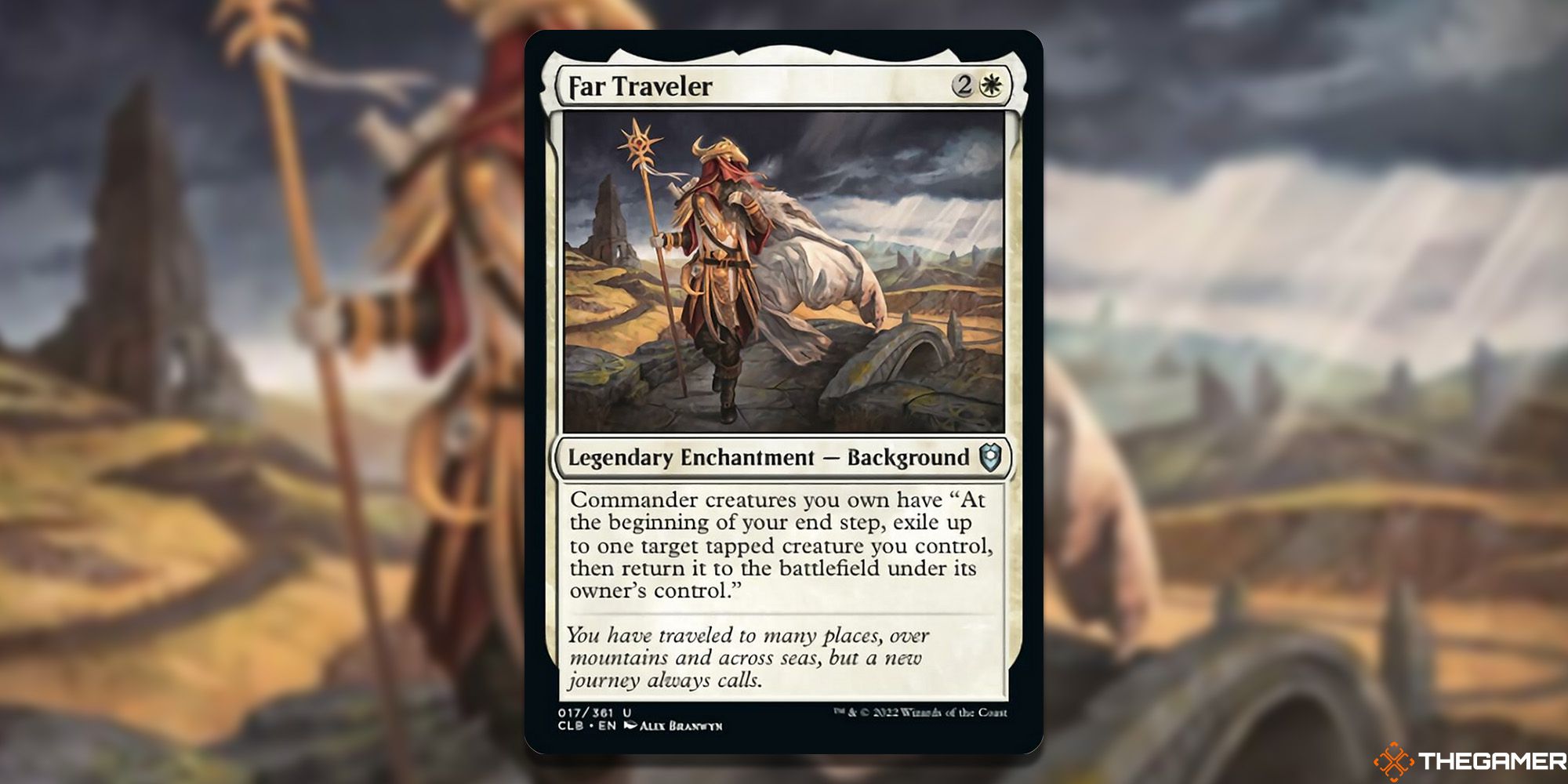 Commander creatures you own have "at the beginning of your end step, exile up to one target tapped creature you control, then return it to the battlefield under its owner's control".

If you ever fancied turning your commander into a Thassa, Deep Dwelling, this is what you need. It requires the creature you blink to be tapped, but with activated abilities and cards like Springleaf Drum, there are plenty of ways to tap a creature without throwing it into combat.

Like any other blink deck, the potential of this ability is incredible. Blink a Dockside Extortionist every turn for lots of mana, a Gray Merchant of Asphodel to deal extensive damage, or a Mulldrifter for plenty of card draw. It being a Background also means you're adding white to your deck's colour identity, giving you access to spells like Path to Exile and Swords to Plowshares.

The one downside of Backgrounds so far has been how they're limited to only partnering with commanders from Battle for Baldur's Gate. In any other deck, you'll need to put it in your 99 and hope you draw it, which takes away a lot of a Background's power. It's still a fantastic card, but it's a shame Backgrounds don't just clip into the existing partner mechanic. 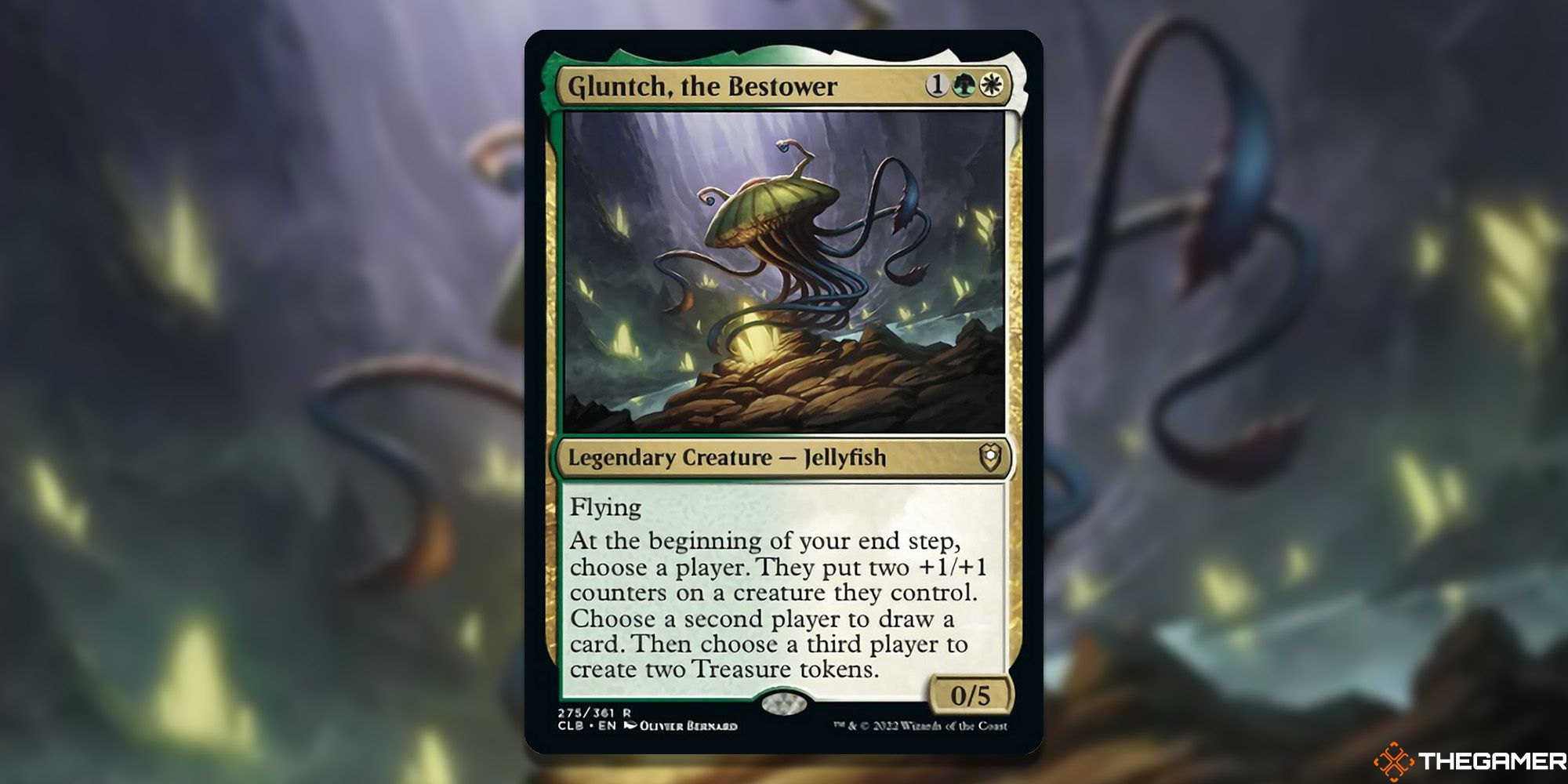 One generic, one green, one white legendary creature – Jellyfish – 0/5:

At the beginning of your end step, choose a player. They put two +1/+1 counters on a creature they control. Choose a second player to draw a card. Then choose a third player to create two Treasure tokens.

The current winner for the "best name in the set" rankings is easily Gluntch. It's hilarious and gross at the same time, and it's even better if you know what Gluntch is in D&D lore: a Flumph. Gluntch the Flumph. There is no way people aren't going to say this commander's name without the moistest, most saliva-filled mouth possible for comedic effect, and small joys like that are what this format is all about.

Name aside, this Gluntch has an interesting design. It does everything an excellent group hug commander likes to do – dangle a carrot in front of your opponents and spread the love to gain favour from the table. But with a bit of clever deckbuilding, Gluntch can turn into a major political player – "you can have the counters if you don't attack me", "I've given you a Wedding Ring, so we're both going to draw a lot of cards", that kind of thing.

One quick thing to clarify, as many people have been confused about it ever since Gluntch was revealed: you must choose three different players, but you can choose yourself for one of those three. If fewer than three players are in the game, the Treasure token effect does not find a valid target and fizzles. Interestingly, this also means you can leave a player out of the party – a punishment for someone acting against you, for example, or to fight against a player who's become the archenemy.