Spellbreak is a new breed of battle royale. Besides replacing guns and vehicles for Gauntlets and Runes, you have an important choice to make before a match even starts. Prior to battle, you’ll choose between one of six classes, each with their own gauntlet and set of perks. The Stoneshaper class is a perfect fit for new players due to its powerful – and easy to use – primary attack along with a couple of useful passive abilities. Here’s everything you need to know about playing as a Stoneshaper in Spellbreak.

When used at close range, there’s not much that can stop a talented Stoneshaper. Its primary attack, Shockwave, creates a massive earthquake that runs in a straight line towards your opponent. They’ll most likely try to levitate and avoid the ground-based attack, so plan ahead and send another Shockwave where they’re going to land. If they try to flee the battle entirely you can try to knock them out with your Sorcery, Boulderfall – a slow projectile attack that deals incredible damage if it connects.

As you make your way to each new circle, you’ll earn new passive skills. Here’s what you’ll benefit from as a Stoneshaper:

Level 1: Stoneskin – Max Armor increased by 20, and you replenish five armor when casting Shockwave under 20 armor.

Level 2: Bedrock – Crash to the ground when casting Shockwave. 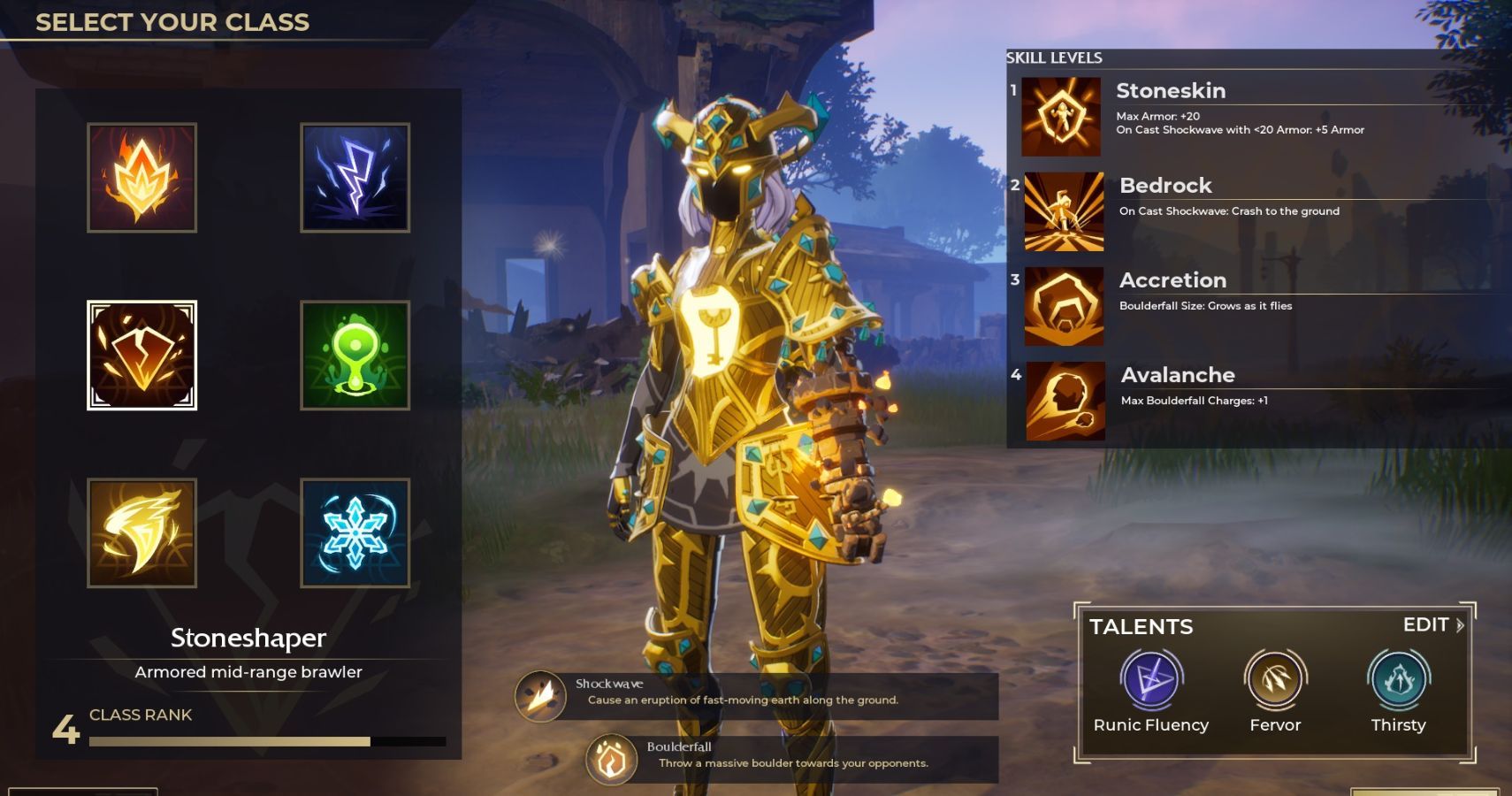 There are two things you need to think about when seeking out your second gauntlet – do you want to complement your close-range prowess, or do you want to remedy your long-range weakness?

If you want to become a close-range powerhouse, you can’t go wrong with a Fire Gauntlet. This will let you cast Firewall – a great way to limit your opponent’s movement and deal a bit of damage. However, you can also cast Shockwave through it to create a trail of fire that’s more powerful than the base attack. The Fire Gauntlet’s Fireball ability is also better at ranged encounters than Boulderfall.

Those looking to be lethal at long-range can opt for either a Frost or Lightning Gauntlet. Both are great for sniping opponents at a distance and come with a Sorcery that can slow down anyone who decides to come into close range.

Flight or Teleport are two of the most popular Runes for Stoneshapers. These both allow you to quickly move into close range and start dealing out damage. Expert players know to avoid going anywhere near Stoneshapers – it’ll be up to you to bring the battle to them. These Runes are also useful for getting out of a difficult battle and regrouping when necessary.

As far as Talents go, you can’t go wrong with the following:

Mind: Runic Fluency – Increases max Rune charge by one. Combined with Flight or Teleportation Runes, you’ll be able to quickly close the gap between you and the enemy.

Body: Dexterity – Reduces mana cost for levitating, allowing you to conserve it for attacks. You’ll often be chasing enemies as a Stoneshaper, and every bit of mana you can save is vital.

Spirit: Thirsty – Potion and Shard consumption speed increases. Great for quickly healing in the heat of battle, and it also has minor effects on nearby teammates.

The best combo attack for Stoneshapers is by far the Shockwave + Firewall duo. Not only does it deal increased damage, but the Firewall will obscure your enemies view and give you the upperhand. The same can be said when casting a toxic cloud, but you won’t see the added benefit of an increase in damage.