Home » News » Skyrim: All Of The Archery Perks, Ranked

Skyrim: All Of The Archery Perks, Ranked

Archery is one of the best combat types in The Elder Scrolls V: Skyrim because it pairs very well with stealth builds, and with the right perks, you can deal a ton of damage with a single arrow. The perks in the archery skill tree are especially unique compared to other combat skills, and they even include a way to zoom in while using a bow.

If you are building a character that uses a bow, then you should make sure to learn about all of the different archery perks that can be unlocked in Skyrim so that your character has the best chance of defeating the enemies that come their way. 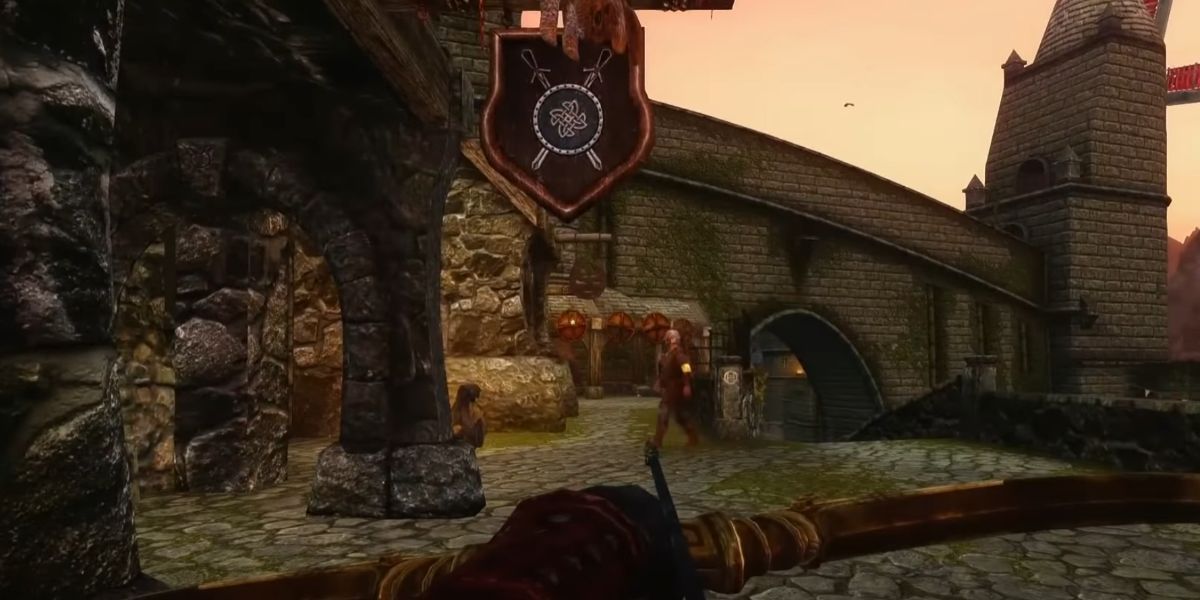 Although every perk in Skyrim has its place in the right situation, there aren’t many situations where the Quick Shot perk is useful. This perk allows you to draw your bow 30% faster, which isn’t a very large bonus and isn’t helpful in most situations.

Considering that most players that use archery pair it with stealth, drawing your bow quickly isn’t a skill that most adventurers need. However, it can be useful if you like to rush into battle quickly while using a bow. 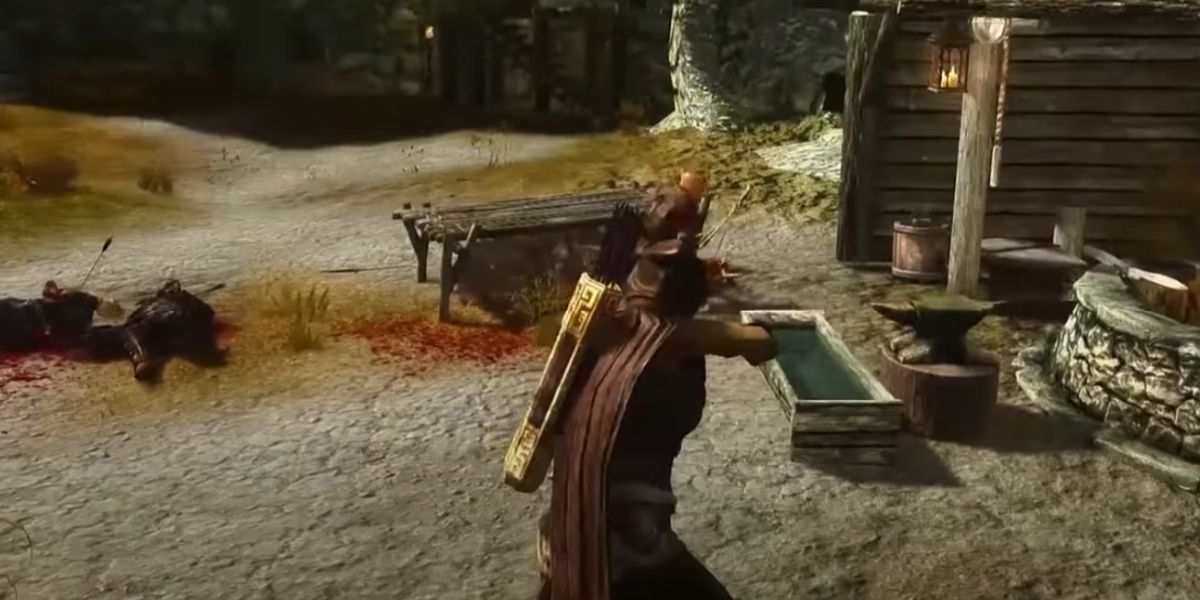 The Critical Shot perk has three tiers, and each tier increases the chance of initiating a critical hit that deals extra damage; each tier also buffs the amount of damage that this critical hit deals.

Critical hits allow you to deal extra damage with what would otherwise be a regular attack, so they’re incredibly useful for players that are trying to build a high damage-dealing character. Even though the Critical Shot perk is worth unlocking, there are a lot of other perks in the Archery skill line that are more useful or provide a stronger effect. 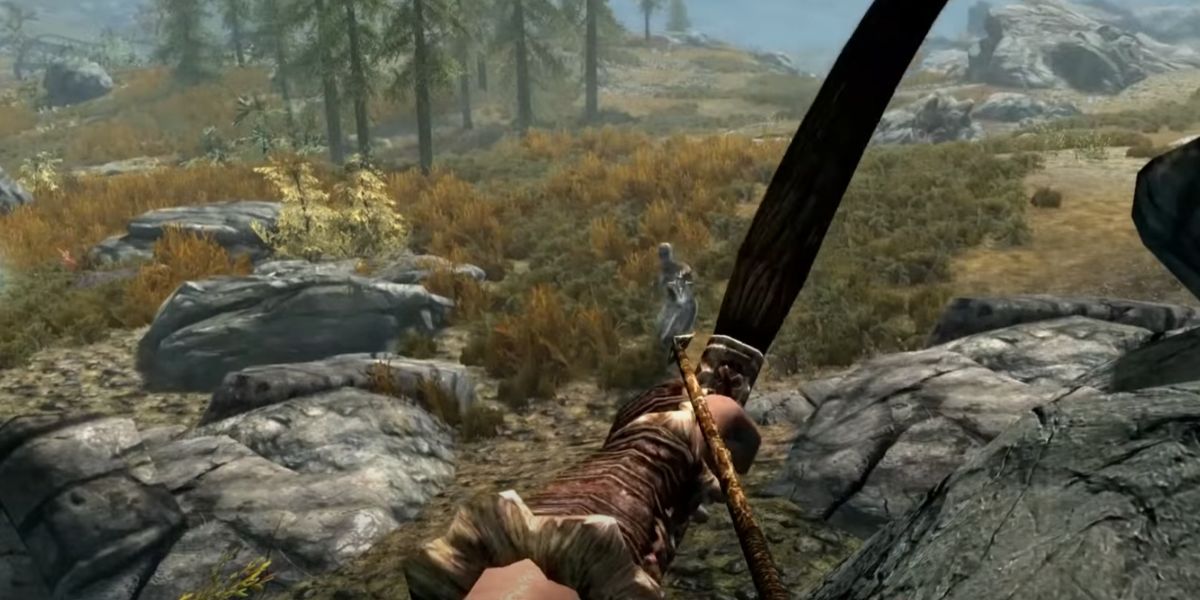 Similar to the Quick Shot perk, the Ranger perk isn’t useful in most situations; however, it does provide a useful effect depending on how you play the game. This perk makes you move faster while your bow is drawn, which is helpful if you are sneaking around and need to follow a character that is moving quickly.

Otherwise, the Ranger perk doesn’t carry much usefulness for most archery builds, and it should be avoided unless you either want to progress in the skill tree, or you have a free perk available that you don’t mind spending. 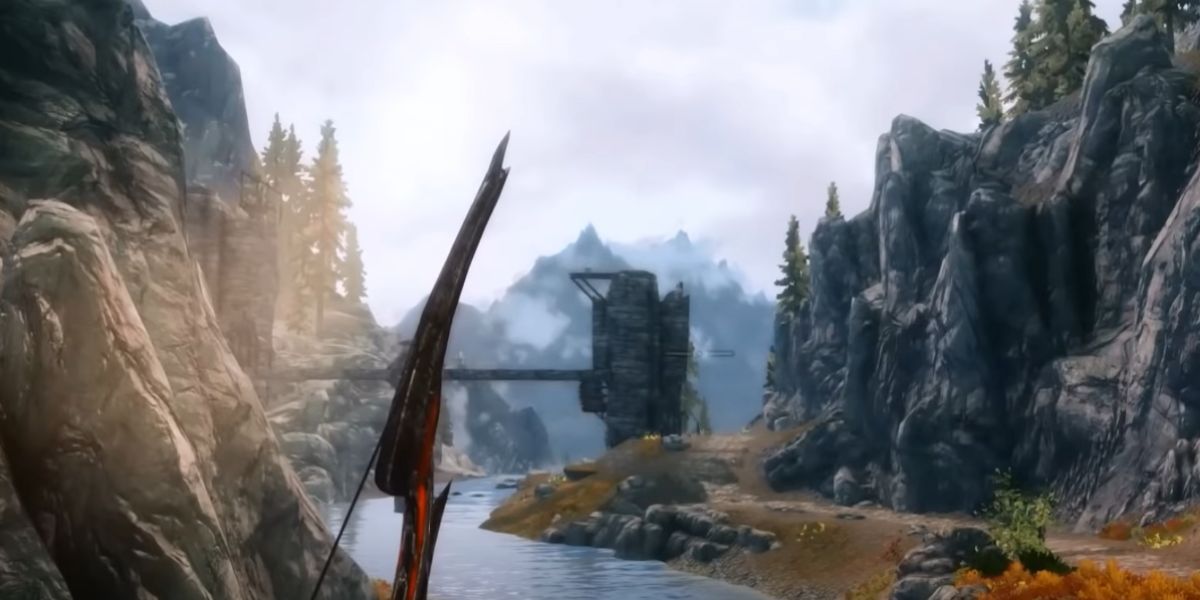 The Hunter’s Discipline perk isn’t absolutely essential for an archery build, but it makes it much easier. The effect that this perk grants is finding twice as many arrows on bodies, which is one of the best ways to get arrows in Skyrim since it allows you to recycle arrows that you have used to kill enemies.

If you are short on gold and don’t commonly find arrows, then the Hunter’s Discipline perk is very helpful, especially for builds that rely solely on archery. 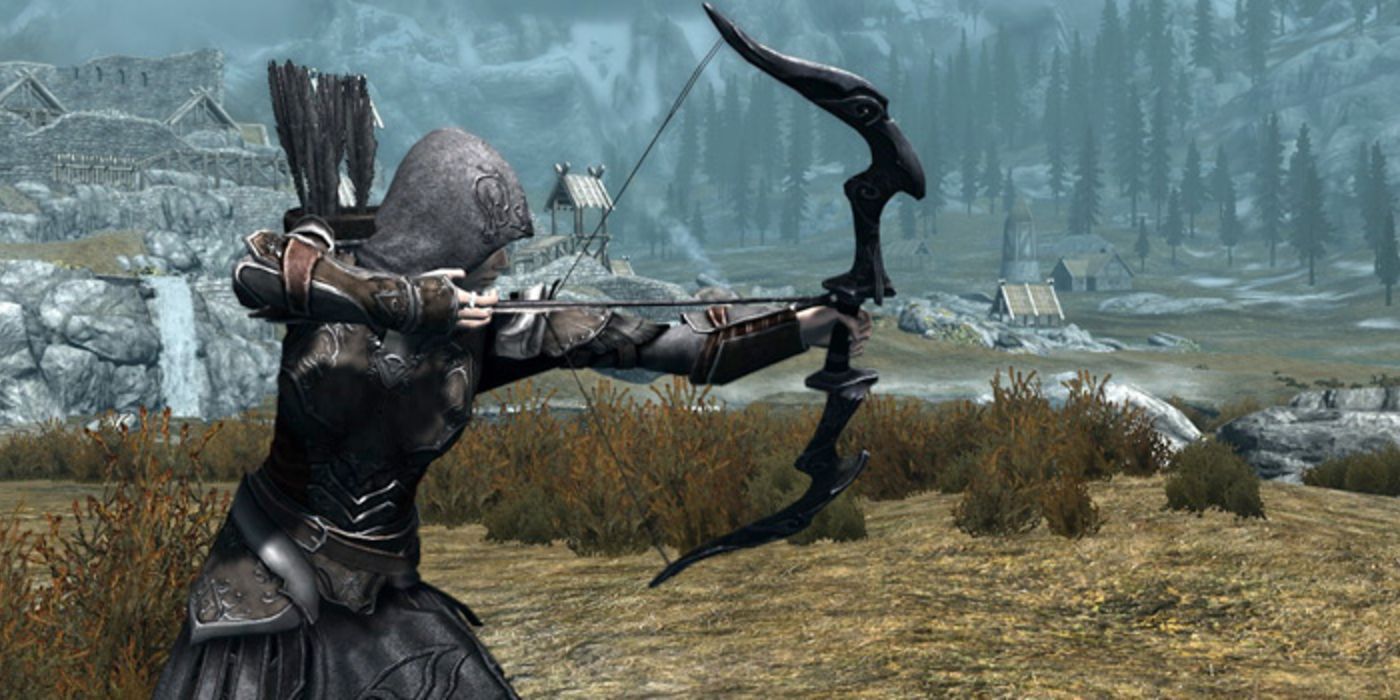 The Power Shot perk is very powerful if it is unlocked early in a Skyrim playthrough. This perk makes your arrows stagger almost every enemy in the game 50% of the time, with the only exception being very large foes such as dragon enemies.

Not only is the Power Shot perk strong, but it only has one tier, which means that you can get this powerful effect in full without spending multiple perk points. Every Archer needs to unlock the power shot perk if they want to make the strongest build possible. 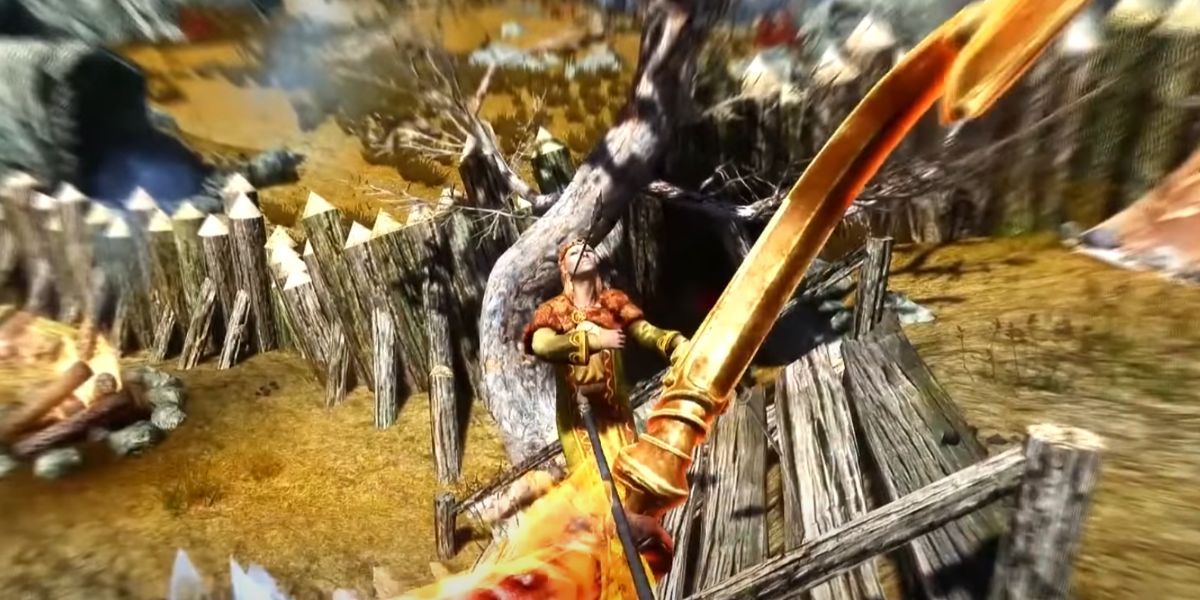 Players that enjoy fighting from a distance and sneaking around will get a lot of use out of the Eagle Eye perk because it allows you to zoom in, making it much easier to fight enemies that are far away. This is an especially useful perk for completing the Dark Brotherhood questline since a lot of the assassination targets are located inside of towns, and you have to be at a distance to kill them or sneaking or the guards will be alerted.

The Eagle Eye perk is the second perk in the archery skill line, which means that you can unlock it early in a Skyrim playthrough. For stealth archers, this perk is a must, and it is also occasionally useful for players that prefer to tackle combat head-on. Zooming-in requires stamina, and if you run out of stamina, then you will stop zooming in. 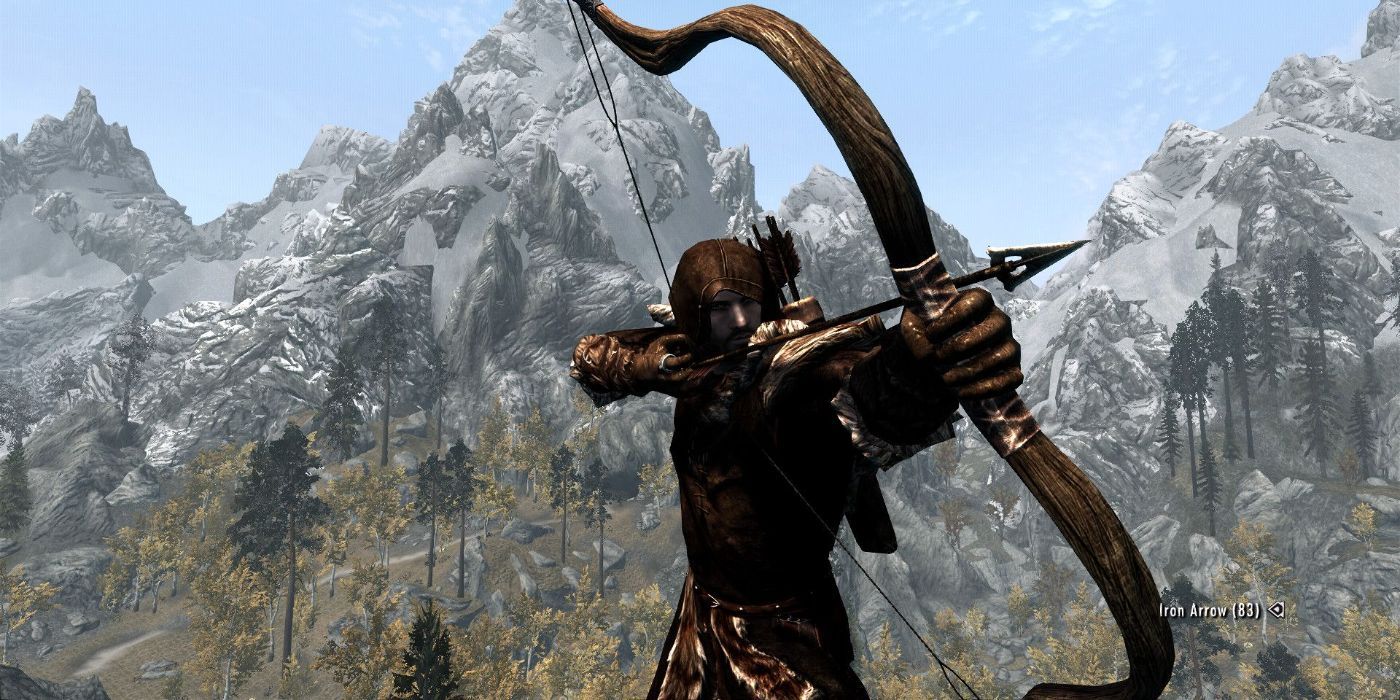 The Overdraw perk is arguably the most basic archery perk in Skyrim; however, it is also one of the most powerful. Overdraw grants you a damage bonus while using bows, and it has five different tiers that each increase your archery damage by 20% more.

Regardless of what specific type of archery build you’re using, the Overdraw perk is a must-unlock. Luckily, it is easy to unlock the first stage of this perk because there aren’t any prerequisites. 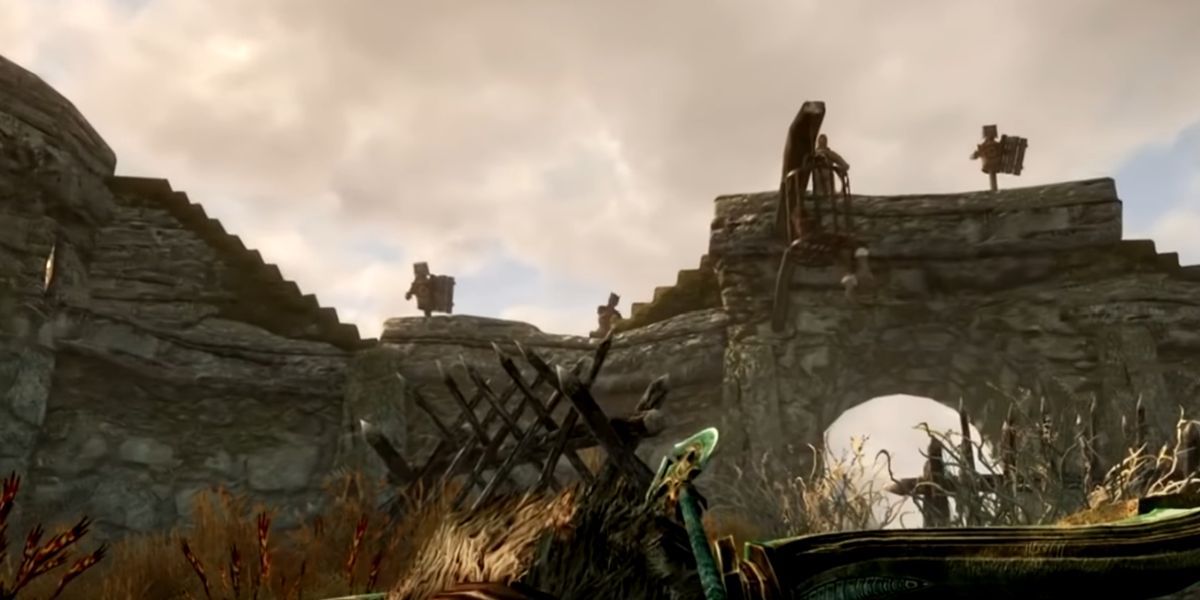 The Steady Hand perk builds upon the Eagle Eye perk. After unlocking this perk, time is slowed whenever you are zooming in with a bow. There are two tiers for this perk, and each of them slows time by 25% each, which is a very large amount and is immediately noticeable. This effect requires stamina to occur.

Steady Hand is a great perk for players that regularly utilize the Eagle Eye perk, and its effect makes stealthily killing enemies much easier since they will be much easier targets. 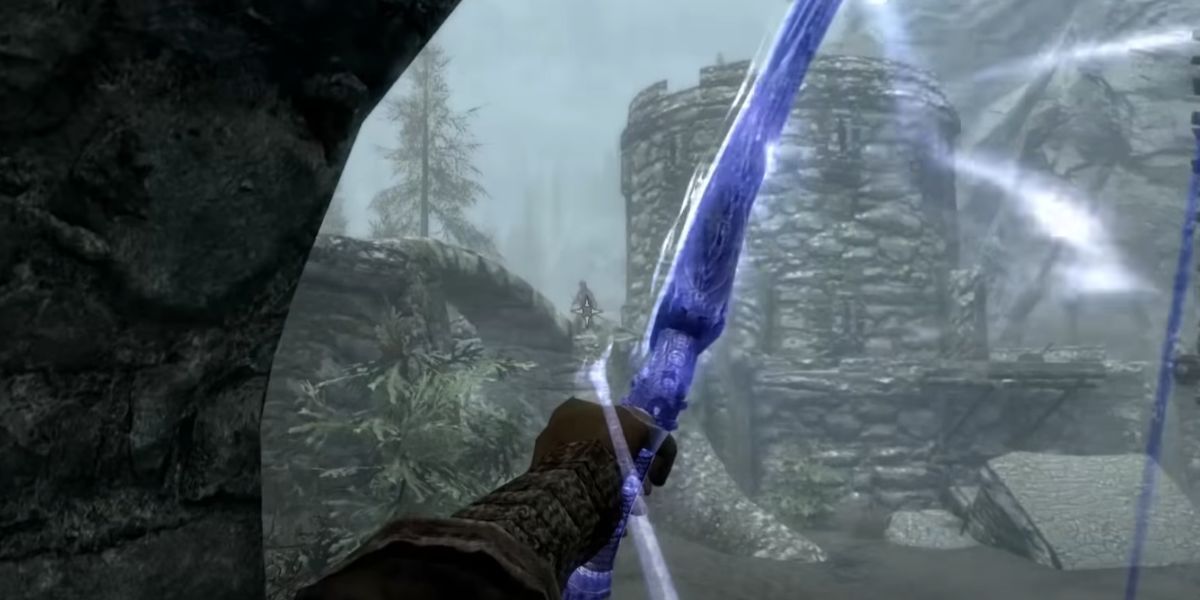 Bullseye grants you a 15% chance to immediately paralyze an enemy upon contact with your arrow. Although 15% may not sound like much, this means that roughly 1 in 7 enemies will be paralyzed during combat. The Bullseye perk is the final perk that is unlocked in the archery skill tree, and it requires level 100 archery before you can unlock it.

The effect of the Bullseye perk is stronger than any of the other archery perks in Skyrim, and it is particularly helpful while fighting enemies with a lot of health since you can paralyze them and then defeat them while they’re lying on the ground. Skyrim enemies that get hit by the Bullseye perk are only paralyzed for a few seconds; however, this time, combined with the amount of time that it takes them to get up, is more than enough to defeat the majority of enemies that roam the wilds of Skyrim.