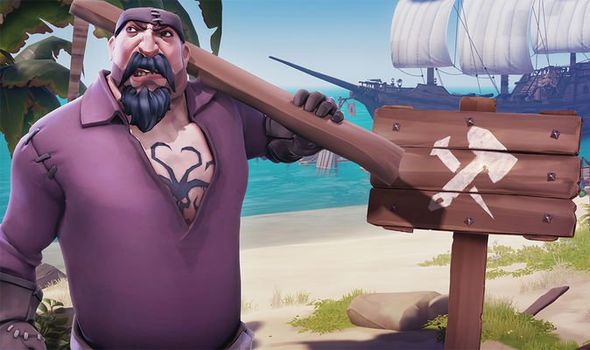 Releasing just a couple of weeks after the Pirates of the Caribbean update, the new download makes some urgent fixes.

Unfortunately, however, the new update also launches alongside a period of server downtime, which begins at 10am BST.

“The Sea of Thieves servers are now offline for essential maintenance,” reads a Rare tweet.

“We’ll let you know as soon as you can download today’s hotfix and return to the seas, but feel free to take a look at the accompanying release notes in the meantime.”

The server downtime is expected to last for at least an hour, so expect the game to be back online before midday.

In the meantime, fans can check out the update 2.2.0.2 patch notes, which include a host of fixes for the Pirate’s Life content.

This includes a fix for a particularly problematic issue in which players fall through ships and into the sea.

The remaining Sea of Thieves update 2.2.0.2 patch notes for Xbox and PC can be seen below.

• Sirens are now able to consistently attack with melee strikes when a player is moving backwards.

• Equipping the Eternal Freedom Cannons on the Brigantine will now allow players to fire themselves out at the correct angle on all ship cannons.

• Crews should no longer experience scenarios where they are unable to board their ship and fall through into the sea instead.

• Improved client stability when travelling through the Tunnels of the Damned.

• Improved server stability, reducing scenarios where crews are removed from a game session.

• ‘A Pirate’s Life’ – Players can no longer reach areas that allow them to get out of the world and into unintended areas of the map.

• ‘A Pirate’s Life’ – When joining a crew in progress, the Wraith Statue at the start of the island experience will now guide players to the correct location.

• ‘A Pirate’s Life’ – When a crewmate is holding the Cursed Captain, other members of the crew will now see the skull animate when talking.

• ‘A Pirate’s Life’ – Retrieving the Brig Key while holding an object should no longer cause the key to become lost.

• ‘A Pirate’s Life’ – After retrieving the Brig Key, players should be able to walk freely around the brig.

• ‘A Pirate’s Life’ – Rejoining a game session at the Ferry of the Damned will now allow access to the lower deck.

‘• The Sunken Pearl’ – Pulleys located in the environments will now display a prompt when they are unable to be used.

• ‘The Sunken Pearl’ – When an Ocean Crawler emerges from the ground, it will now display appropriate visual effects.

• ‘The Sunken Pearl’ – Crews reaching the salvaging room should no longer find the correct statue sequence fails to raise the water level, leaving them unable to proceed.

• ‘The Sunken Pearl’ – On entering the Trophy Room, interacting with the pulleys prior to defeating the Ocean Crawlers will no longer prevent players from escaping the room.

• ‘The Sunken Pearl’ – When the Silver Blade battle resets after a failed attempt to complete it, restarting the encounter will now allow players to correctly board the ship.

• ‘The Sunken Pearl’ – Crews can now successfully retrieve the Chest of Everlasting Sorrows if it’s discovered after the Silver Blade Battle.

• ‘The Sunken Pearl’ – If the Chest of Everlasting Sorrows is discovered after the Silver Blade Battle, the side door should now open when the antechamber is reached.

• ‘Captains of the Damned’ – The hand-in location for the Villagers’ Valuables has been made clearer for players.

• ‘Dark Brethren’ – Pulleys located in the environments will now display a prompt when they are unable to be used.

• ‘Lords of the Sea’ – Ghostly Resource Crates retrieved during the encounter can no longer be cashed in for gold, reputation or Seasonal Renown.

• ‘Lords of the Sea’ – Once the Black Pearl is able to be boarded, migrating to a new server will now bring the Black Pearl to the new location, enabling crews to complete the Tale.