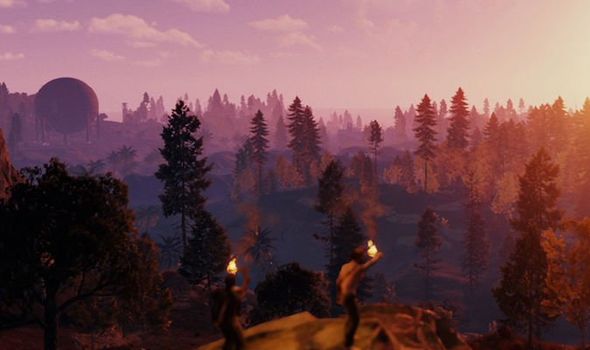 Rust Console Edition has seen several testing phases, and all of them have seen some kind of server strain.

So with the full release date now set for the next 24-hours, the Rust Console release time could see a huge spike in server traffic.

For those who might not have played it yet, Rust is a popular survival sim that offers plenty of scope for experimentation.

Gamers can band together to build massive structures, and they can also duke it out across PvP servers.

Rust has grown in popularity on PC in recent years, and 2021 has been the first time console gamers have been able to jump in.

But while it is called Rust Console Edition, it should be noted that this version is primarily focused on Xbox One and PS4.

On Xbox Series X|S and PlayStation 5, through their respective backwards compatibility modes, the game will work.

However, the development team have not completed its implementation of these compatibility modes, and as such, gamers may experience higher levels of instability and unexpected behaviour.

Rust gamers with early access have already seen some of that, with a flurry of new updates expected over the coming week.

But for now, most fans are focused on the Rust Console Edition release date, which has been set for Friday, May 21.

No set release time has been shared, but it looks like Rust Console Edition will be unlocking between midnight and 1am BST across both platforms.

And with any big multiplayer launch, there could also be Rust Console servers going down throughout the day.

Double Eleven have been tuning everything up for launch day, but gamers should still be aware that there could be heavy traffic ahead.

The development team have also provided a rough guide on what to expect from post-launch support, with a new statement explaining:

“Right now our focus is on improving the performance and stability. Once that’s out of the way we can start adding additional content to the game. A roadmap is close to completion, and we believe now is a good time to share some of it with you.

“Our first post launch update aims to bring the highly requested Tech Tree, a great update to the game play, as well as Gestures that will improve the way you communicate in game.

“Other minor features like new Building Blocks will also be added. Some of the monuments that were present in the pre-order beta like the Train Yard, the Water Treatment Plant and the Supermarket need further polish, so for now we will work on improving them, and add them back with this update set to release in approximately 6 to 8 weeks.”

“We know that you want to see some of the most popular monuments like the Oil Rig and the Cargo Ship in game, as well as new methods of transportation like the horse, for example. Rest assured, some of those features are already being tested internally and we plan to release them in future content updates.

“Outside of the minor updates we will also have major updates where we will release significant amounts of new content to make sure the experience remains fresh for everyone invested in Rust Console Edition. Each update will have a central theme, making them feel more like game expansions than regular content updates.

“Major updates will release around 8 to 10 weeks apart from one another and they will not follow the same timeline in terms of content as Facepunch’s version of Rust. We will try to prioritize highly requested features first, but some of them might not make it to the game anytime soon due to the hardware limitations.

“The first major update will be called Power Surge, bringing new features like the electricity system and new in-game monuments like the Powerlines. A lot more is expected to come with this update, once we approach the month of release we will be revealing more details on what’s going to be included.”