Home » News » PAX East 2020: Kana Quest Could Be The Gateway To Learning Japanese

PAX East 2020: Kana Quest Could Be The Gateway To Learning Japanese

Many of us have dreamed of learning a second language for one reason or another. Be it to enjoy different entertainment or possibly travel to a foreign country, language is one of the most difficult tasks for adults to grasp. As the human brain evolves, it starts to get stuck into patterns and those patterns are hard to break. We may have more life experience, but it becomes simply more challenging to learn something as specific as language with age.

Thankfully, there are tons of guides and references one can use to ease the process. Either through classes, interactive programs, or even mobile applications, many people that can dedicate some time each day can eventually start to pick up a second language. If you’ve found that those different applications don’t quite cut it, it might be time to take a look at Kana Quest.

Utilizing the power of video games to attempt to teach players Japanese (with both the Katakana and Hiragana alphabets); Kana Quest is a puzzle game that creates a narrative around a tile trying to make friends. It’s mostly a conceit to get you moving between different levels, but it adds something of a plotline to compel you to move on. 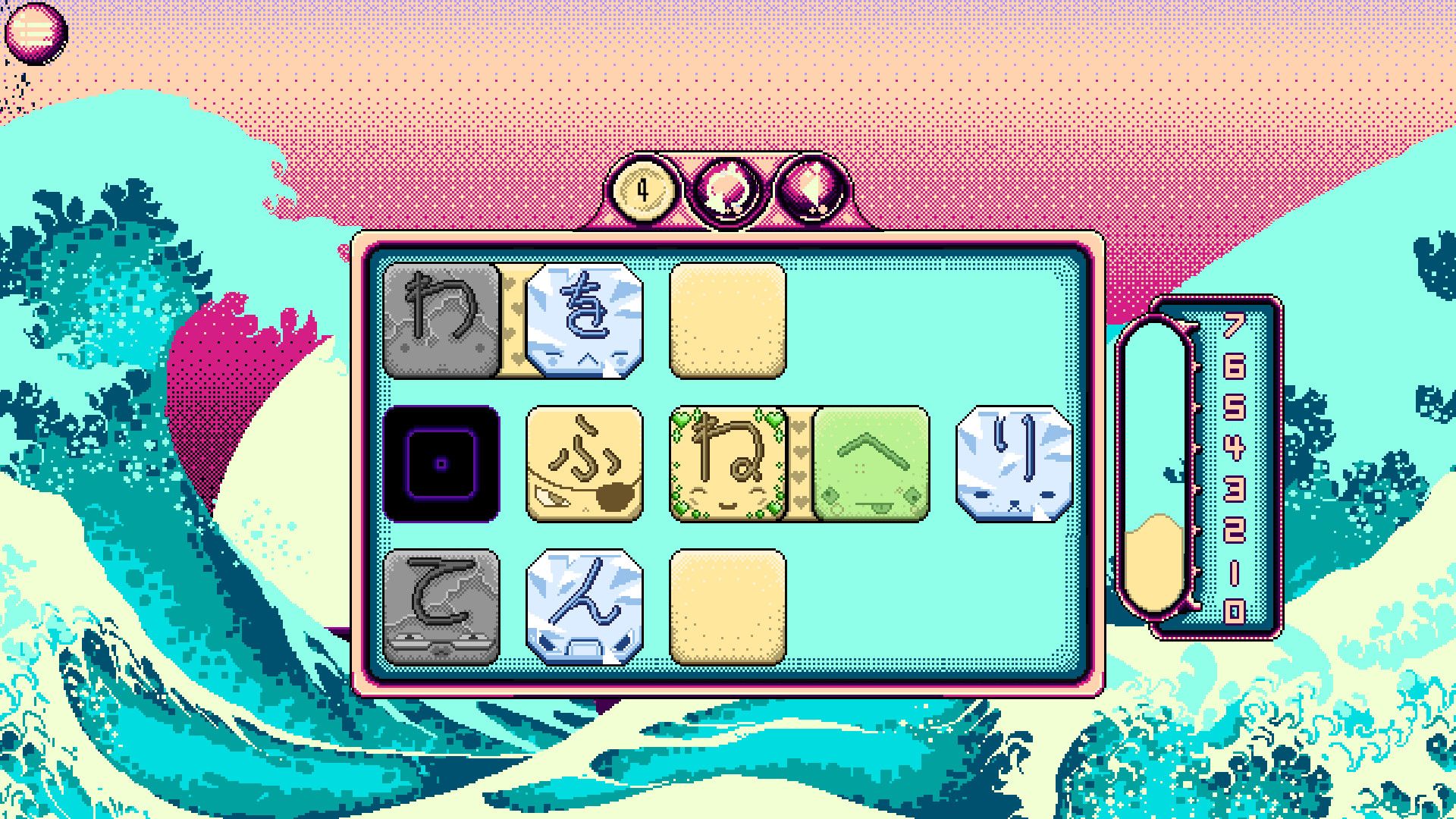 The gameplay works in that you’ll see a bunch of tiles on the screen that correspond to some phrase in the Japanese alphabet. You’ll need to link these tiles together based on common vowels or consonants in a straight line. The idea is that repeated exposure to the same phrases will get you to recognize them as characters without having to guess.

The biggest helping hand Kana Quest gives you is that you can double click each tile to see what phrase it is at any time. While there’s a move limit for attempting to get different levels of medals, checking what each tile says doesn’t cost you a turn. If you seriously have no intention of learning Japanese, you can even use this as a different method of progressing through the puzzles at hand.

As you make your way through Kana Quest, some later levels will even introduce different gameplay concepts like tiles that can’t be moved and others that remain hidden until you figure out what phrase they are. You’ll accomplish that guessing by moving tiles near it and seeing what connects to it. Connections between tiles are represented by hearts flowing, letting you know there is some commonality.

Out on the show floor at PAX, I’m not sure I really got the best understanding of Kana Quest. I know how the general flow works, but I didn’t want to put on headphones after the third day. I was mostly going off sight and with all of those other distractions going on, I wasn’t really paying attention to the letters on each tile. 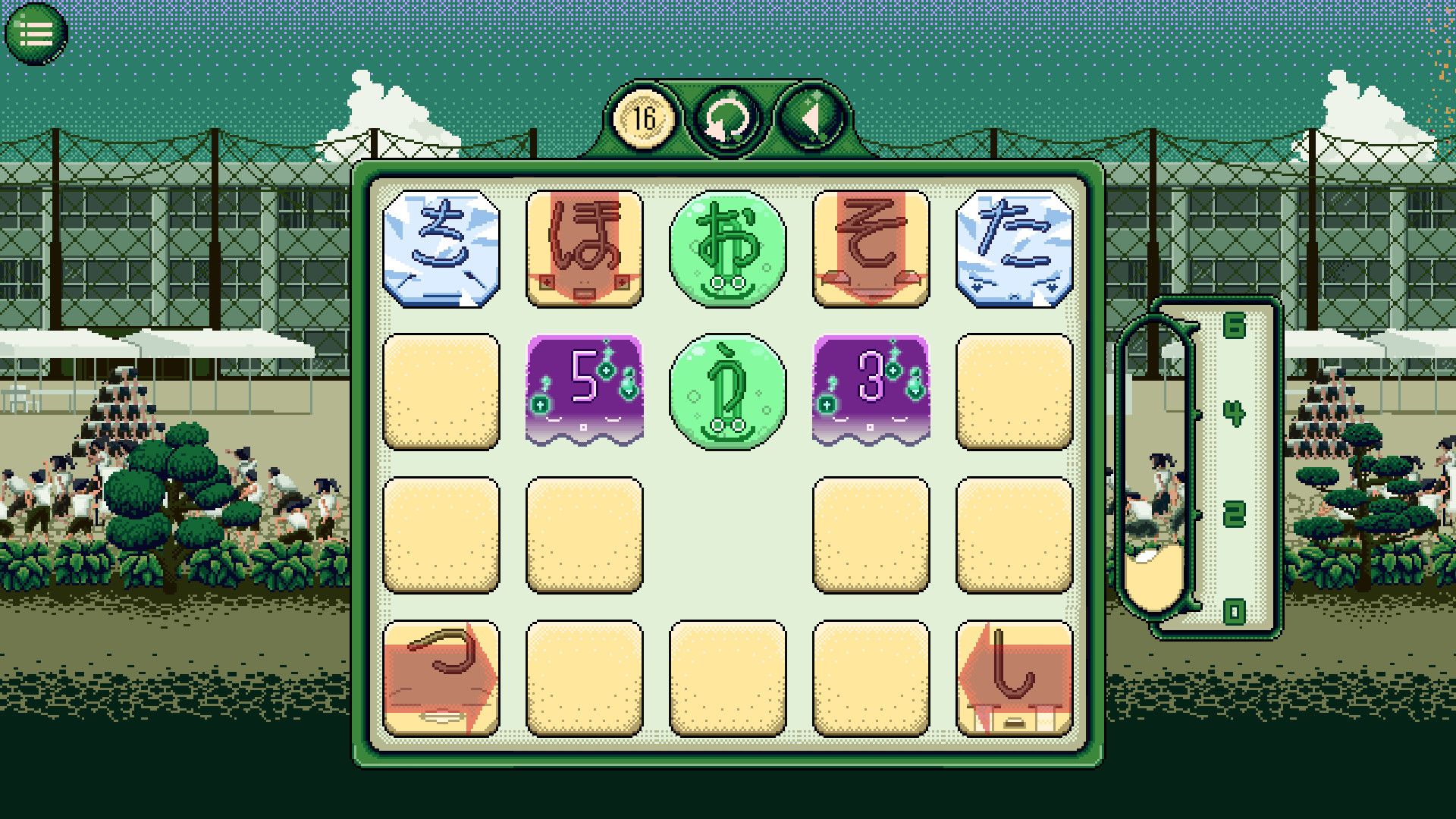 I spoke briefly with developer Theodore Kipen and even brought up my concern about how effective Kana Quest might be in helping someone learn. As he put it, any tool is as effective as someone wants it to be. Obviously some learning applications may be more thorough, but if someone isn’t taking a class -or lecture, or study, etc – seriously, then it won’t work. If you truly want to learn Japanese from Kana Quest, it is entirely possible.

To that end, I asked about how long it would take someone not well versed with Japanese to complete Kana Quest. The game contains around 300 different puzzles, so Theodore guessed around 15 hours. He did note that in his observations of people that were in the process of learning, the game managed to reinforce their understanding of Japanese and helped them solidify their knowledge.

It’s a lot to ride on Kana Quest, but even if it fails as a learning tool, it’s still a cute game. The idea is sound and done in a very genuine manner. Nothing seems like a cheap marketing ploy to get people dropping tons of cash on some useless tool. Hell, Kana Quest is only $7, from my understanding. You won’t be out a lot of cash if this doesn’t teach you anything.

Regardless, I’m eager to see if Kana Quest truly can get me recognizing Japanese text. I obviously don’t expect to become a master of the language after 15 hours, but it would be nice to see some basic phrases that I can take to other aspects of my life.