Innistrad: Crimson Vow is Magic: The Gathering's most recent set, serving as a return to the game's beloved plane of Gothic Horror, putting the spotlight on the vampires of Innistrad and a wedding that will bind two of the most prominent vampire families on the plane. While the set is filled with potent new vampires, it is all packed with unique and interesting new cards for decks of all colors.

As green has become quite synonymous with being the recipient of powerful new cards, this trend doesn't seem to be slowing down, with Crimson Vow containing several great new green cards. So today, we're going to shine a light on the most outstanding green cards in Innistrad: Crimson Vow and see which are the strongest! 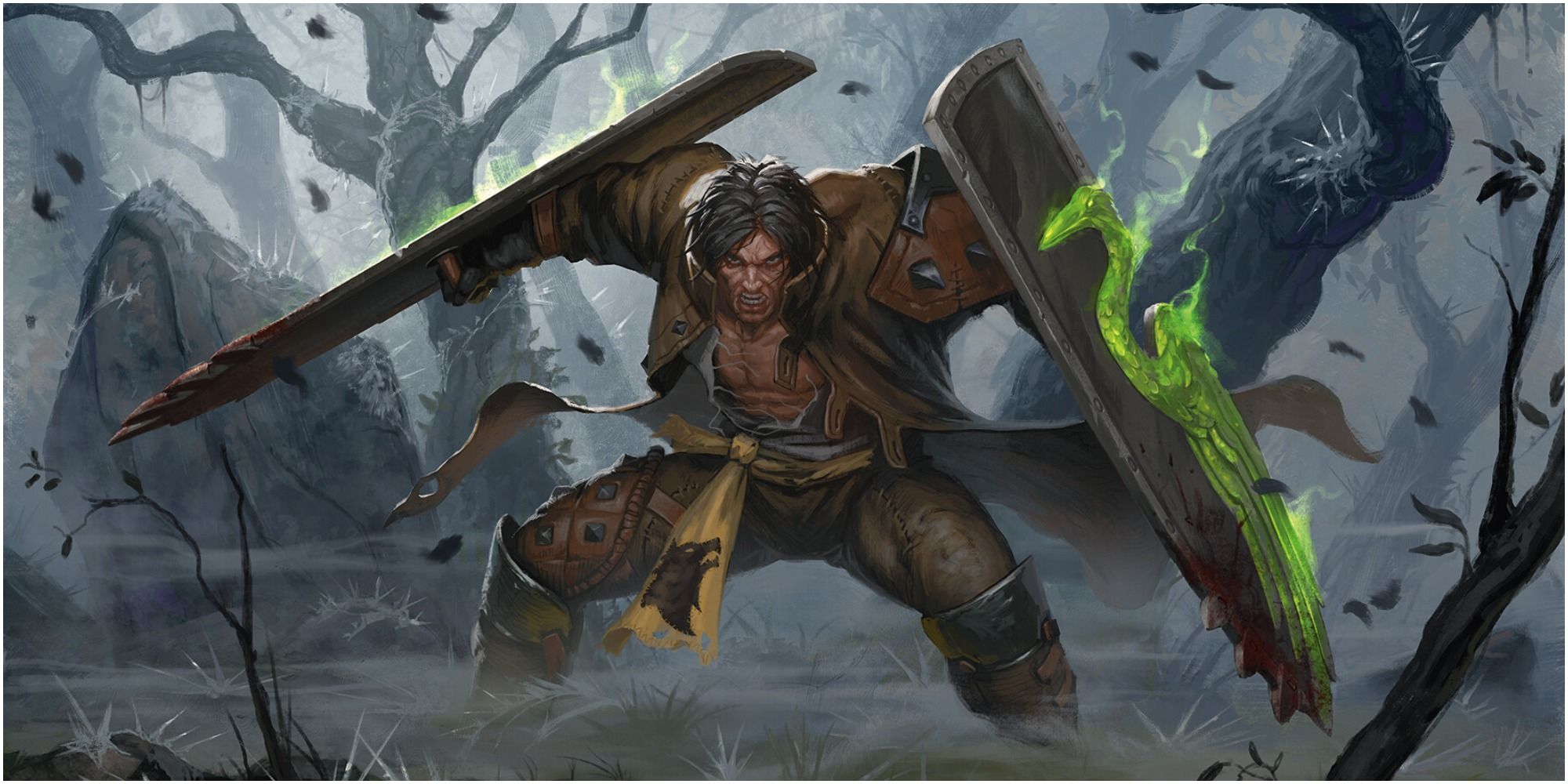 A 1/1 human warrior for three mana, Hamlet Vanguard is a great new option for human-tribal decks that feature green.

In addition to having ward 2, Hamlet Vanguard enters the battlefield with two +1/+1 counters on it for each other nontoken human they control. When played late enough into a game, this creature can serve as a massive threat for only three mana. 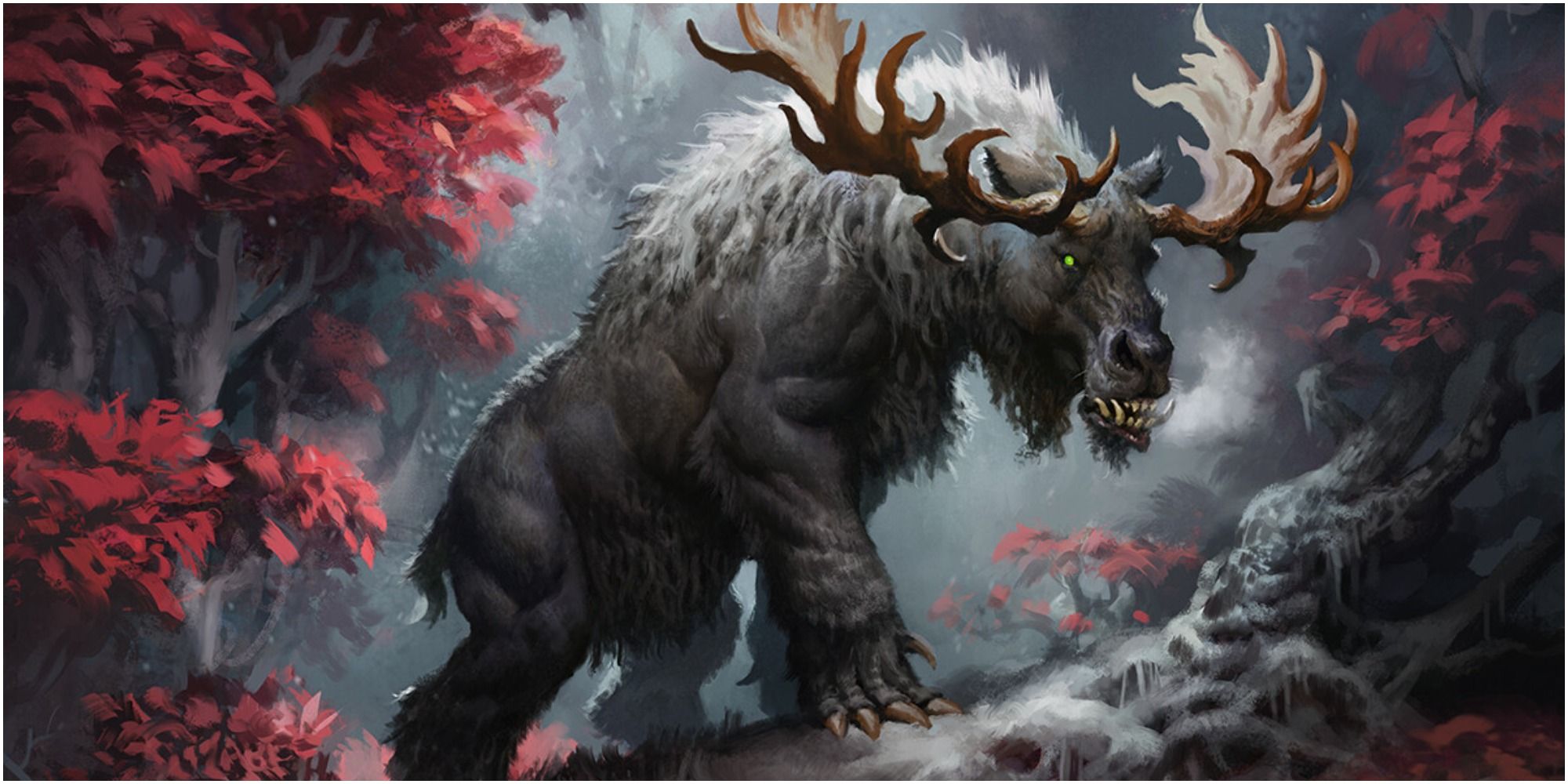 Ulvenwald Oddity is a solid new beast that's perfect for aggressive creature-heavy decks. Entering the battlefield as a 4/4 with trample and haste for four mana, while this may not seem like much at first, the Oddity can be transformed for the cost of seven mana.

Once transformed into the Ulvenwald Behemoth, not only does this creature become an 8/8 with trample and haste, but it provides all other creatures under its owner's control with +1/+1, trample, and haste as well, allowing your deck to become much more aggressive. 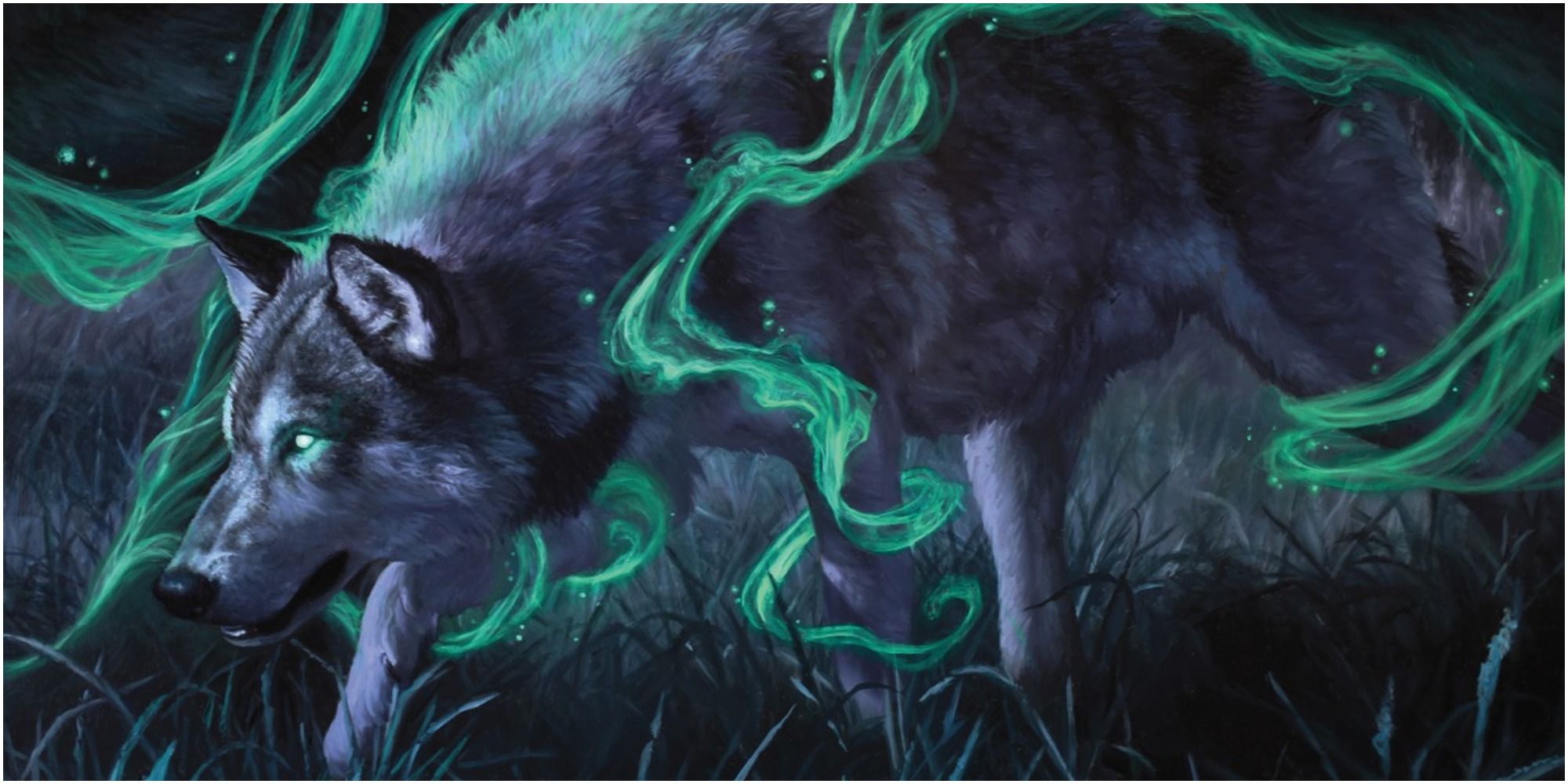 Ascendant Packleader is an incredibly efficient 2/1 wolf that only costs a single green mana. While this is already a great rate for a one-drop, it enters the battlefield with a +1/+1 counter if its caster controls a permanent with mana value of four or greater.

It is also capable of growing over the course of a game, gaining +1/+1 counters whenever its controller casts a spell with mana value four or greater. This allows a creature that costs a mere one mana to potentially deal substantial damage and offer notable board presence. 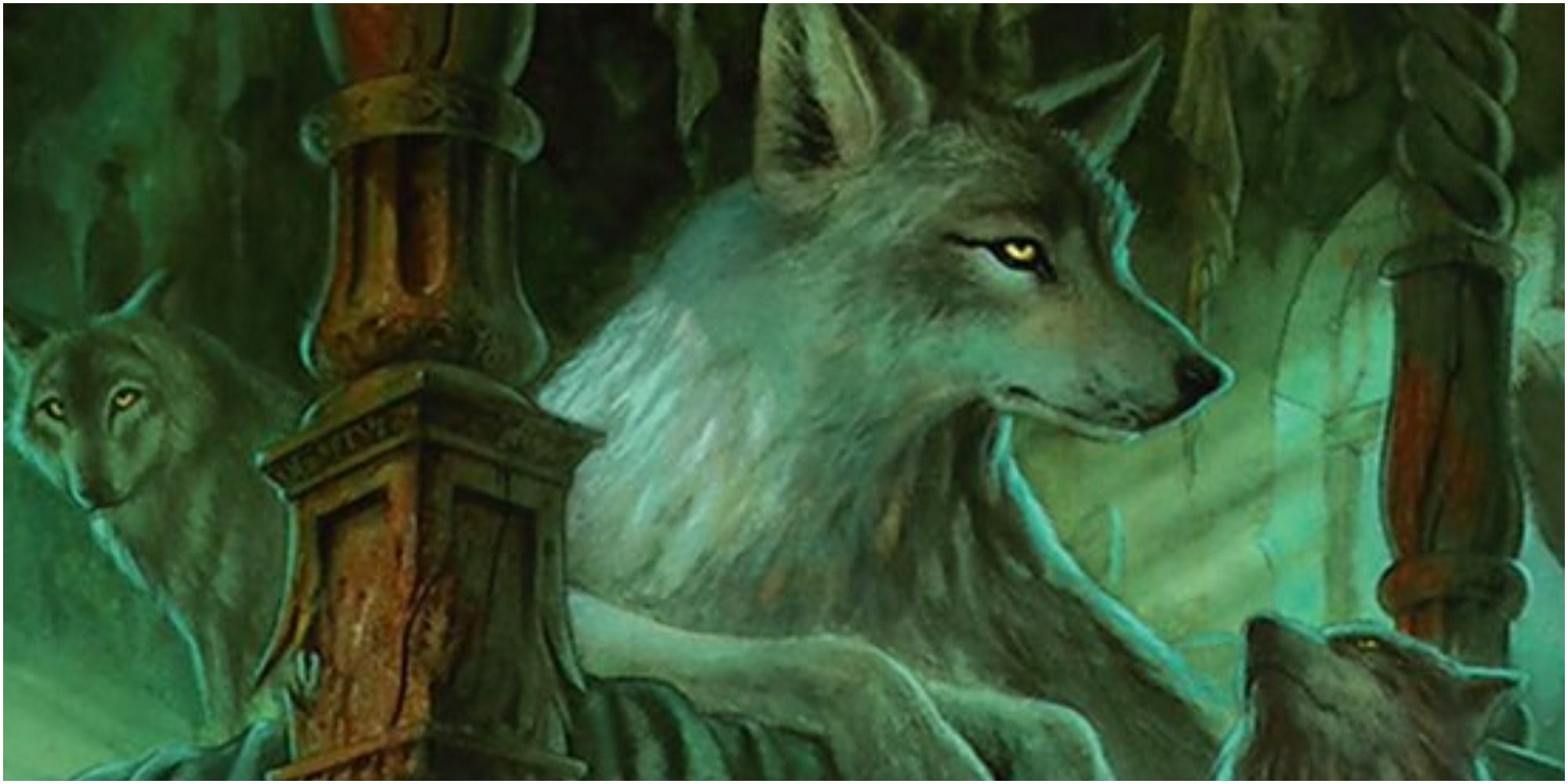 A must-have for werewolf-tribal and wolf-tribal decks, Hollowhenge Overlord is a 4/4 wolf with flash for six mana.

While this rate may not seem impressive, at the beginning of its controller's upkeep, this wolf creates a 2/2 wolf token for each creature that player controls that's either a werewolf or a wolf, potentially creating absurd amounts of wolf tokens for its controller. 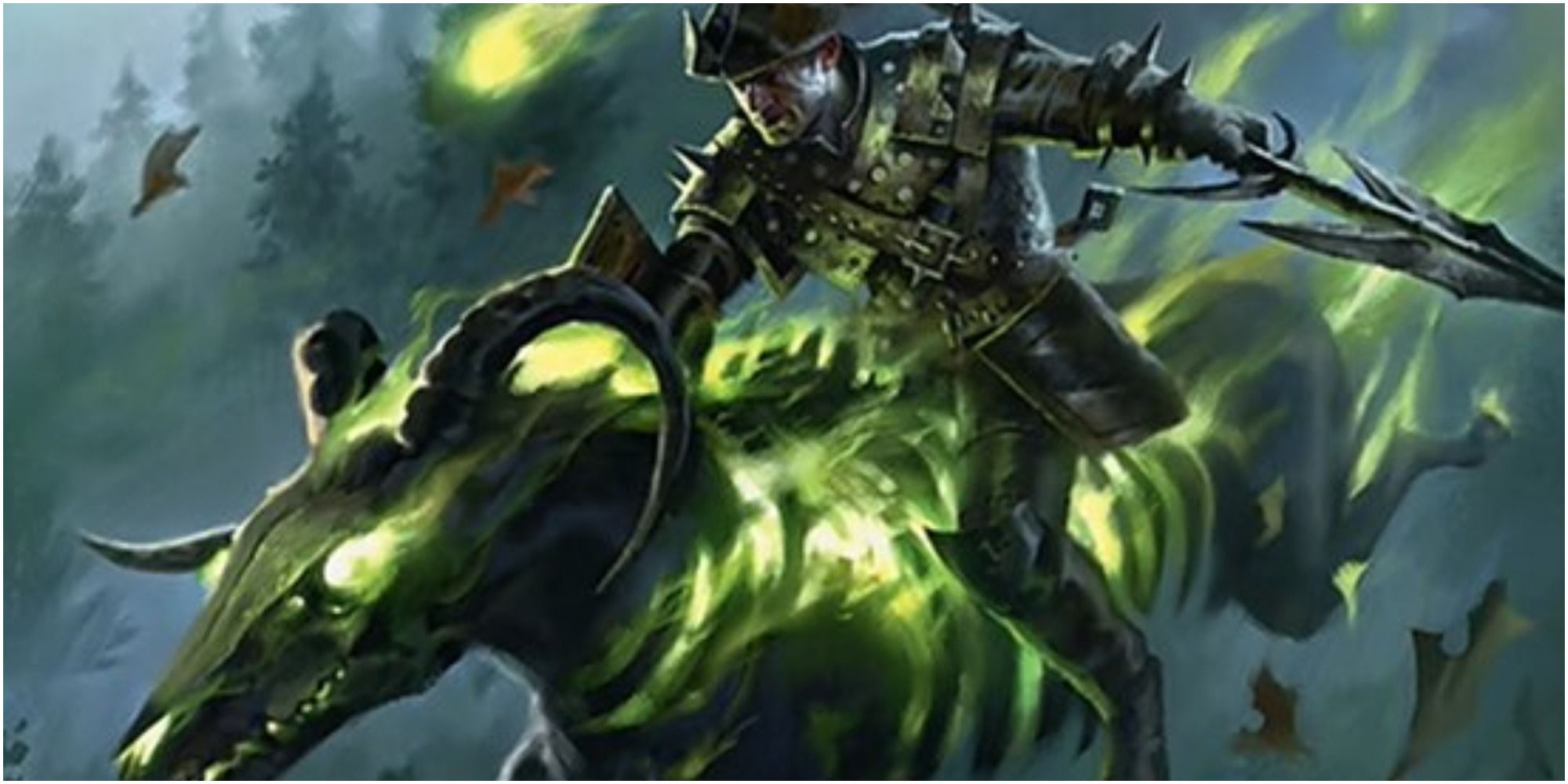 For five mana, Thundering Mightmare is a 3/3 spirit horse with soulbond that is capable of growing one's creatures. As long as this creature is paired with another creature, whenever an opponent casts a spell, a +1/+1 counter is put on each of those creatures.

In the multiplayer format of Commander, due to increased number of players, this card can cause a creature to become quite huge over the course of a single turn rotation. 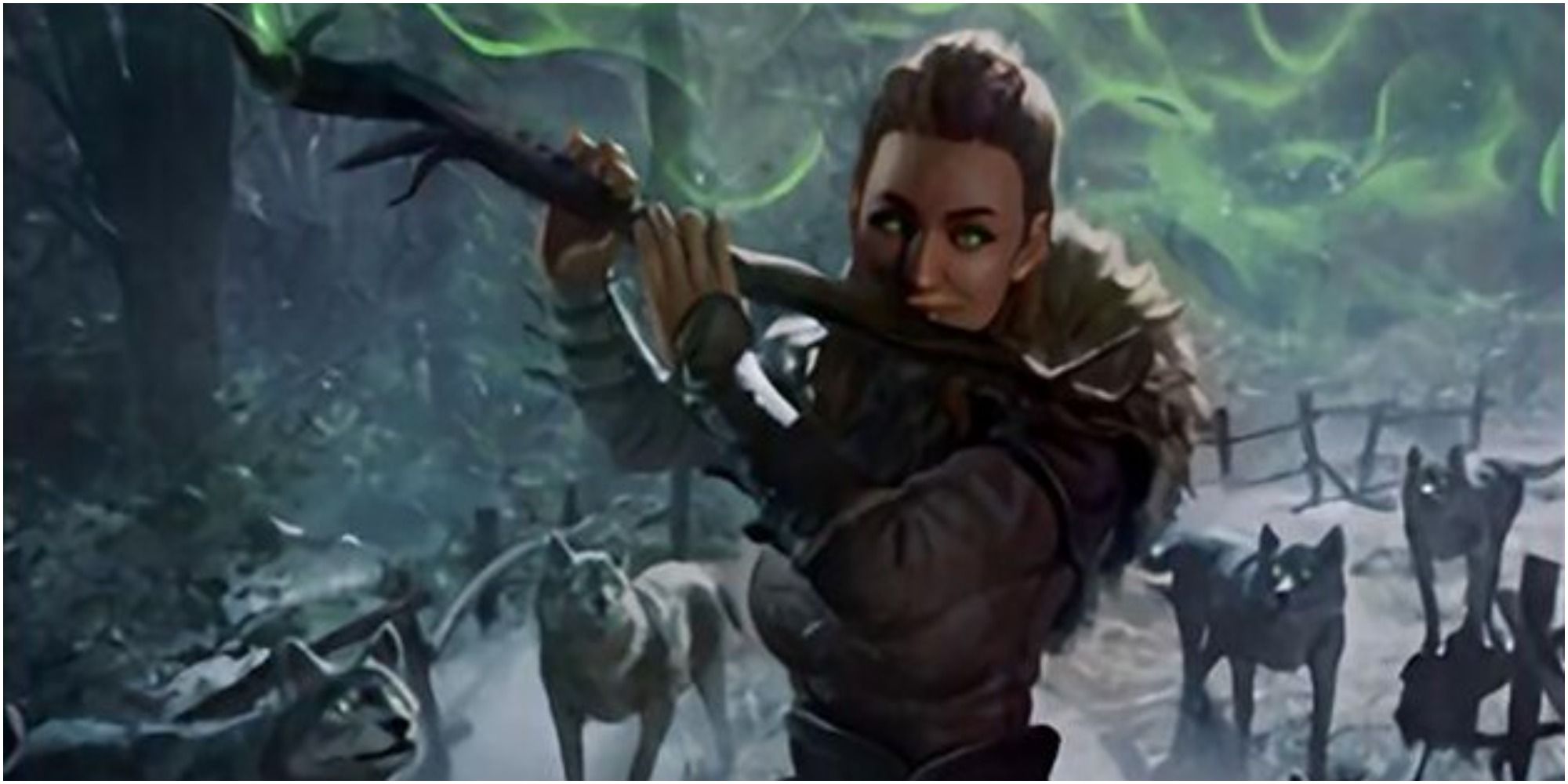 Howlpack Piper is one of two new stellar green werewolves in Innistrad Crimson Vow. Entering as a 2/2 with Daybound for four mana that can't be countered, the Howlpack Piper has an activated ability for two mana that allows a creature to be put from its controller's hand onto the battlefield, untapping the Piper if the chosen creature was a werewolf or wolf.

While this form is stellar, whenever this creature transforms, becoming the Wildsong Howler, it becomes a 4/4 and allows its controller to look at the top six cards of their library, putting a creature found this way into their hand. This means that between this creature's two forms, this card can dig for powerful creatures and cheat them into play. 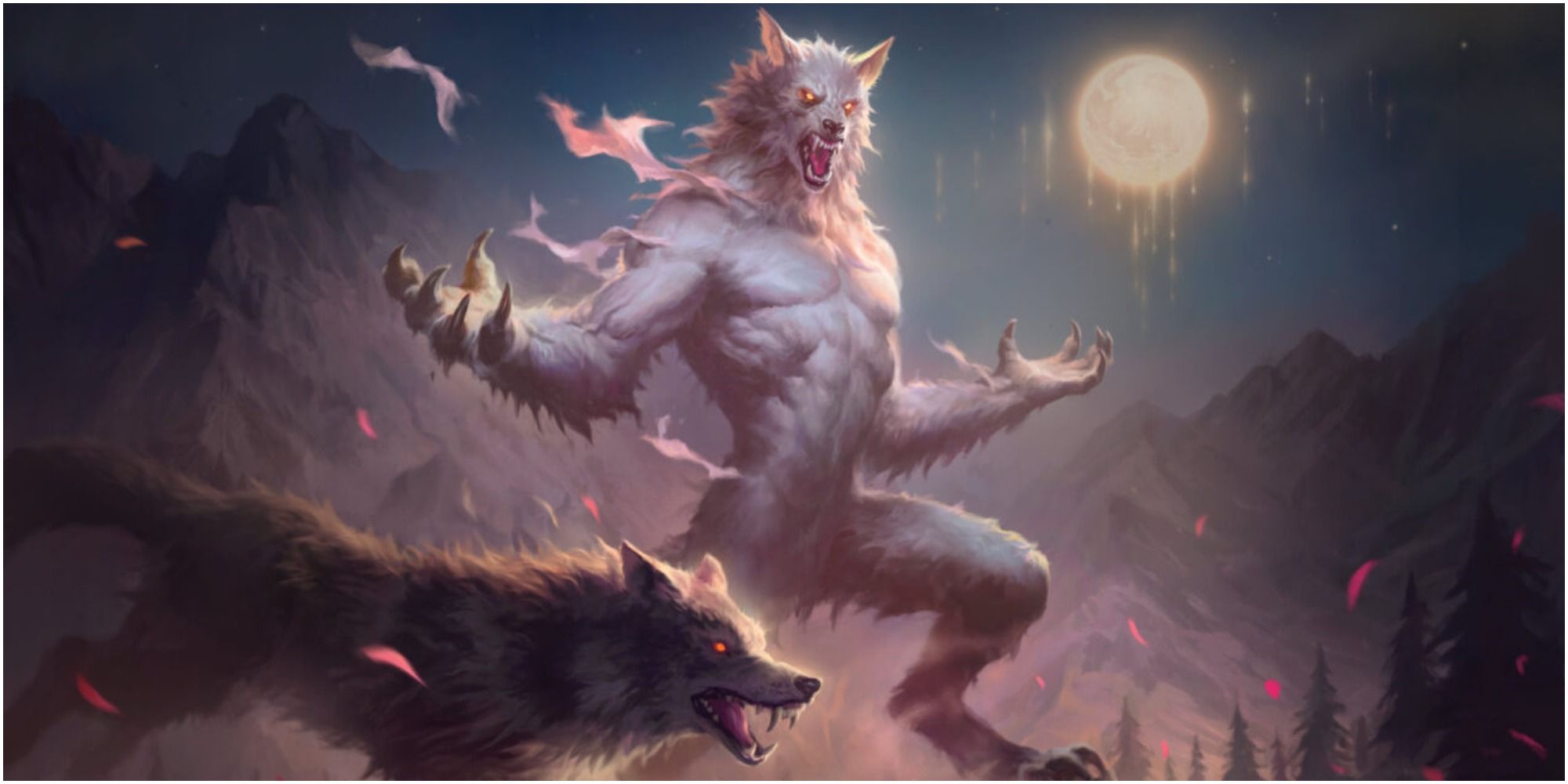 The second potent new green werewolf that Crimson Vow has to offer, Avabruck Caretaker is a 4/4 with hexproof and daybound, putting two +1/+1 counters on another target creature at the beginning of each combat. While this is useful, the card really shines when transformed into the Hollowhenge Huntmaster.

As the Hollowhenge Huntmaster, not only does this werewolf grow into a 6/6 and retain its +1/+1 counter ability, but it provides all permenants under its owner's control with hexproof, offering stellar defensive utility. 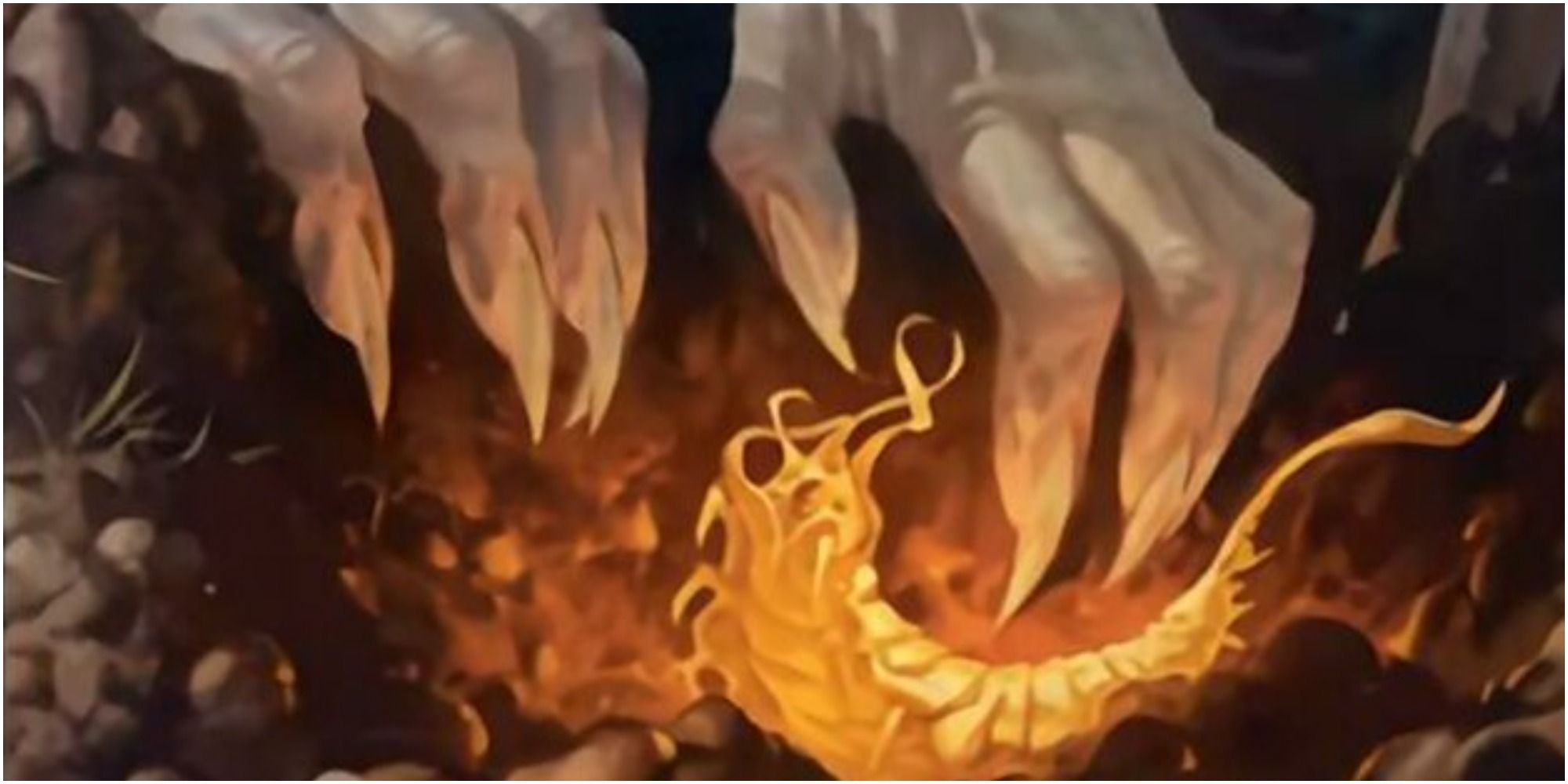 Featuring the new Cleave mechanic, while Dig Up is a one-mana green sorcery, it features a Golgari Cleave cost of four mana. If cast normally, this card allows its caster to tutor for a basic land, putting that card in their hand. However, if the cleave cost is paid, its caster can ignore the basic land clause of this effect and can instead search their library for any card, effectively functioning as a Diabolic Tutor.

This means that Dig Up essentially serves as two cards in one, offering two different effects when needed. 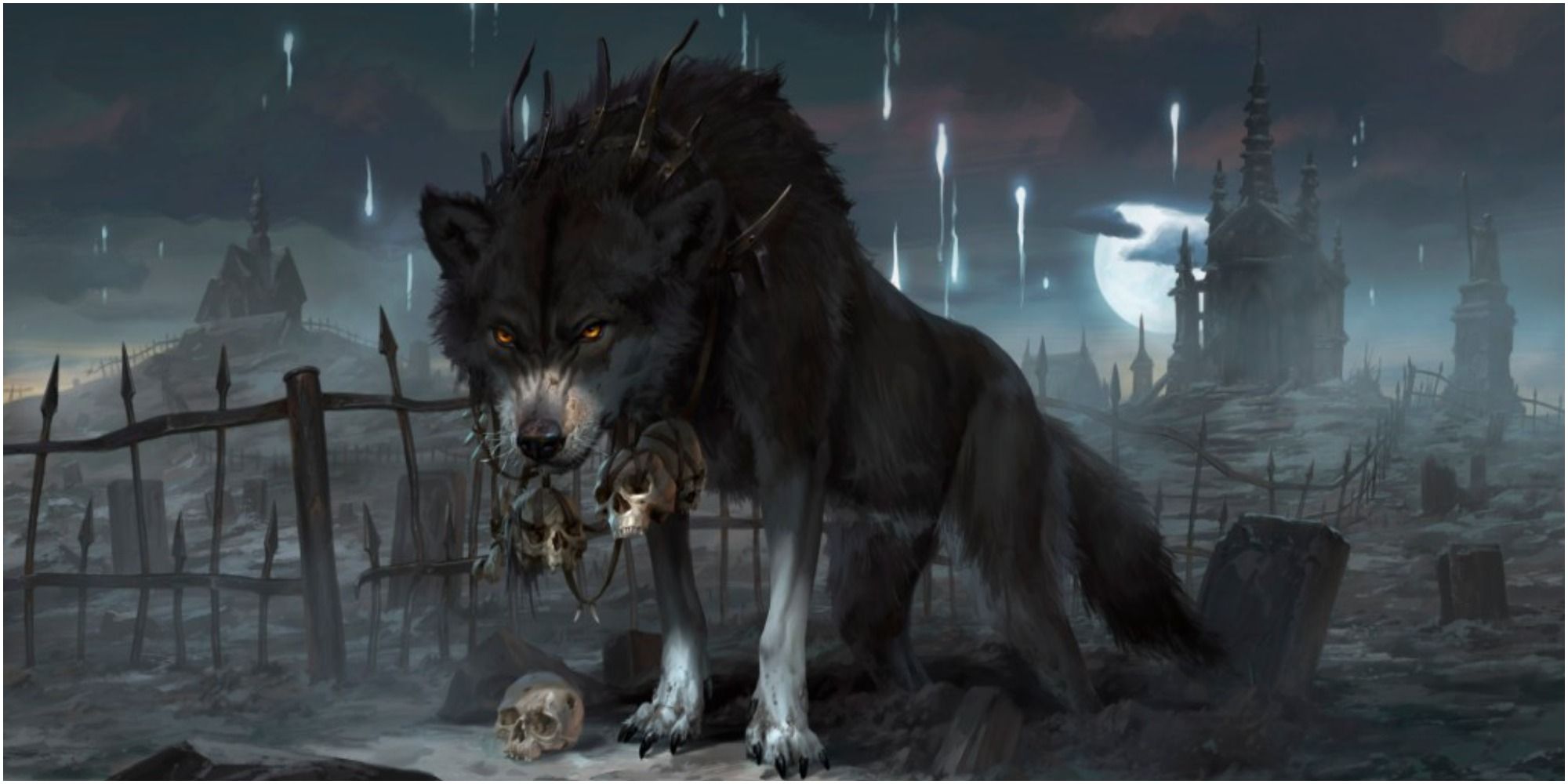 Cemetery Prowler is a great green mythic, taking the form of an efficient 3/4 wolf with vigilance for three mana. This card can remove threats from an opponent's graveyard, exiling a card from a target graveyard whenever it attacks, thus it turns this graveyard hate into value.

This is because cards the Cemetery Prowler's owner cast cost one less mana as long as they share a type with a card exiled by the Prowler. 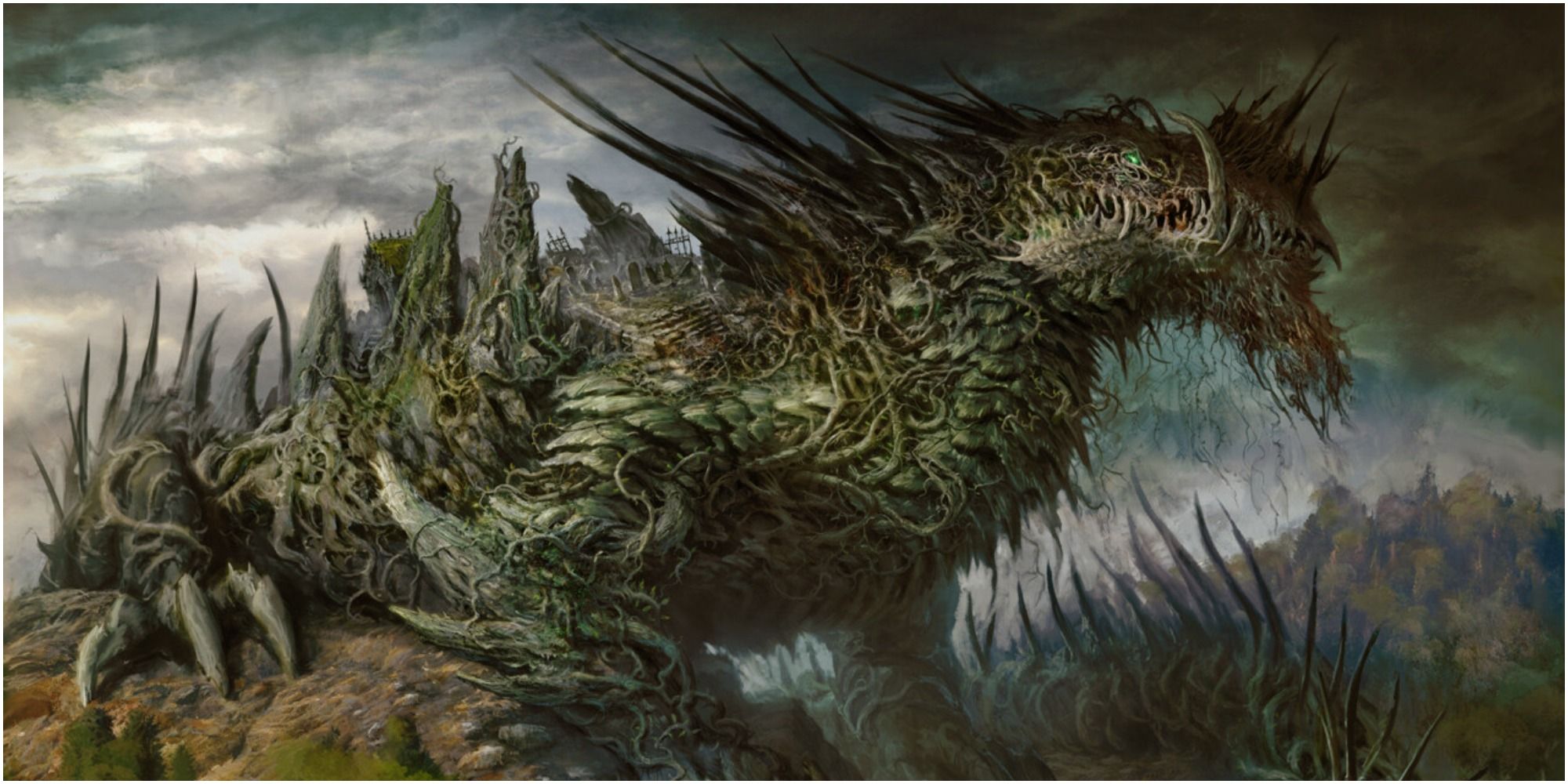 Easily the most powerful green card in Crimson Vow, Cultivator Colossus is a card that weaponizes both card draw and mana ramp. For seven mana, this plant beast's power and toughness are equal to the number of lands under its owner's control

While this doesn't sound like much at first glance, when it enters the battlefield, its controller can put a land from their hand onto the battlefield, draw a card, and repeat this process. This means that with enough lands in one's hand, the Cultivator Colossus can be used to chain together this effect to put an absurd number of lands into play.