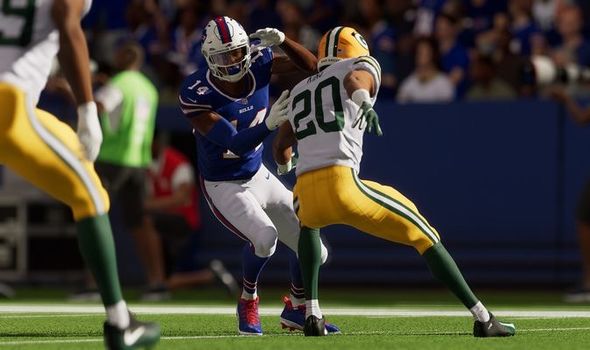 The Madden NFL 22 Early Access trial has been extended on Xbox One and Xbox Series X.

This includes games like upcoming first-person shooter Battlefield 2042, as well as FIFA 22 and Madden NFL 22.

Unfortunately, however, the Madden NFL 22 Early Access period has run into a few problems with the countdown timer.

Because of the timing issues, EA has decided to extend the Madden NFL 22 beta for another day.

This means EA Access and Xbox Game Pass Ultimate subscribers can play Madden NFL 22 until 4.59am BST on the morning of August 18.

“Our team wanted to provide an update to yesterday’s post, where some players in the Madden NFL 22 Early Access Trial on Xbox were seeing their countdown timer run down after exiting the game.

“We appreciate your patience as we’ve been working closely with Microsoft to ensure impacted players get their full Madden NFL 22 Trial experience.”

In addition to extending the trial, EA Sports has promised to search for a fix to the issue.

“For players who have not used their trial hours and wish to do so in the future, please note the below workaround to ensure your timer stops while not playing Madden NFL 22. We are working diligently to ensure the timer issue is fixed ASAP.”

“Madden NFL 22 is where gameday happens. It’s everything you love about the NFL injected into every mode via ALL-NEW Dynamic Gameday.

Pre-order customers will receive a number of bonuses, including Brady or Mahomes Power Up Items, an Elite Passer Strategy Item, 20 Franchise Staff Points, and your choice of NFL Stars.

If you’re looking forward to playing the game in full, Madden NFL 22 has an August 20 release date on PlayStation, Xbox and PC.