Following a successful two-year stint on Apple Arcade, indie developer Dreamteck is porting Lifeslide – an atmospheric paper plane flight adventure through life – to Steam this August. Don’t be fooled by the game’s minimalistic nature, though. Lifeslide goes big with its sweeping musical score, along with visuals that are on a surprisingly grand scale, creating one of the most relaxing and wholesome games that I’ve played in a long time.

You’re thrown into Lifeslide without any real direction. You control a little paper airplane as it floats through space, intuitively flying through the rings that you pass. Once you reach the “end” of this area, the real world of Lifeslide bursts to life, sending your airplane flying through grassy plains, snowy mountains, tropical islands, and other more abstract levels.

The beginning levels introduce new mechanics that will continue throughout the game’s timed story mode. You can pick up gems that give you more time, or ones that can be used to upgrade your paper airplane – you can even collect actual airplane parts that are scattered throughout each world. Power-ups can also be collected that can give your airplane a boost when it’s starting to stall out, or another that opens doors to hidden areas or shortcuts. If you should manage to stall out, you’ll simply restart from the beginning of the level.

The level design in Lifeslide is beautiful. As minimalistic as the game is, its levels feel epic in their own right. They are, quite frankly, places that I would love to visit in real life. Skittering the plane across the top of a babbling brook is as relaxing as it is somehow cathartic. Soaring through winding, windy caverns is exhilarating. However, I think the most satisfying level might be the one that features water slides that the plane effortlessly slides down, picking up speed along the way.

Lifeslide’s musical score is incredible, complimenting its level design perfectly. The game draws inspiration from alternative rock and synthpop music, with its tracks matching the tone and vibe of each individual level. I could see myself letting the game run in the background simply so that I can listen to the music. Even the menu track is great. In fact, I’d go so far as to compare the music in Lifeslide to the Kingdom Hearts soundtrack – a bold claim to make, but one that I stand by. 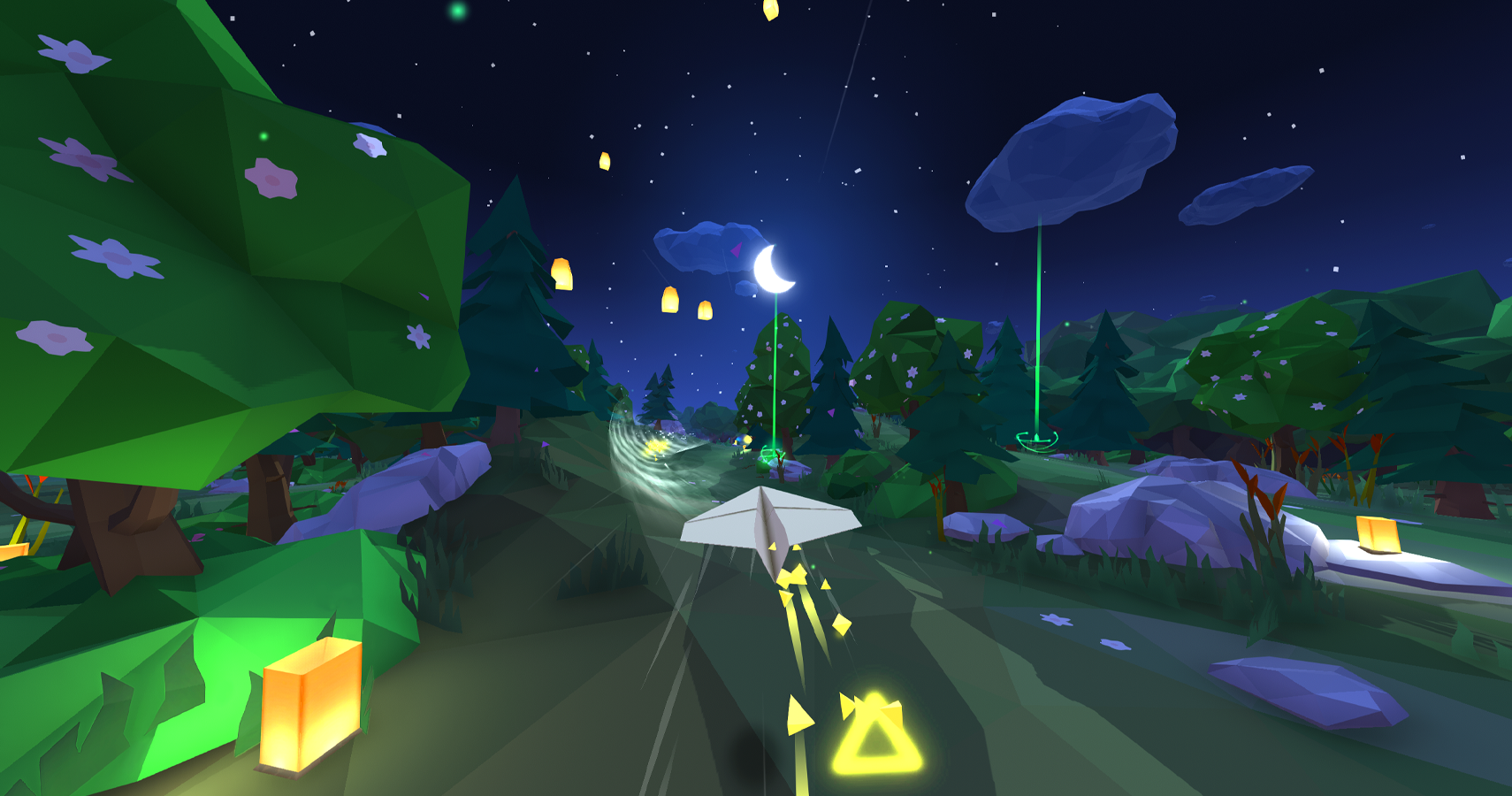 As calming as Lifeslide can be, the beauty of it is that you can play the game however you like. The game’s Zen mode allows you to play without having to worry about a time limit, while featuring some very interesting levels. One minute, you’re boosting across a sunset-lit greenbelt, the next you’re flying above an ocean with massive great white sharks while stingrays fly above you in the sky. These can certainly still be relaxing moments, but you’re able to up the intensity depending on how you play. Are you fine simply gliding straight through each area, or are you more of a risk-taker that darts in and out of caves and overhangs? As such, replayability definitely seems to be present in Lifeslide.

I can see how Lifeslide would be a solid experience on mobile devices, but I’m glad that it’s making its way to PC. If the title is not included in this weekend’s Wholesome Direct E3 Showcase, it will be a very big missed opportunity. I personally haven’t encountered any issues while playing an early build of the game, but I’m sure that Dreamteck will be tightening everything up and including additional elements to give players the best experience possible when Lifesllide releases later this summer.

A PC copy of Lifeslide was provided to TheGamer for this review. Lifeslide is expected to release on August 6, 2021 for PC via Steam.