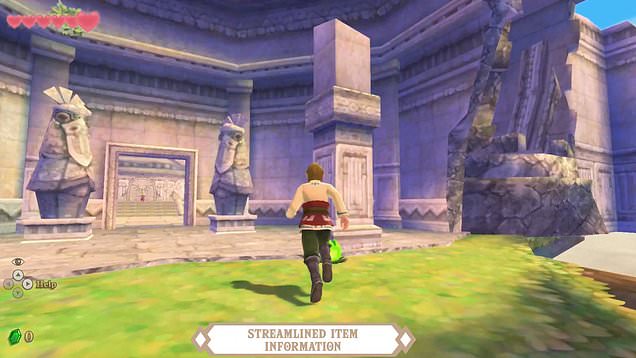 Nintendo outlines some quality-of-life changes for the Zelda: Skyward Sword remaster, which are bound to please players of the original.

When The Legend Of Zelda: Skyward Sword first released for the Nintendo Wii back in 2011, it garnered a mixed reception for a multitude of reasons. One of the first things Nintendo confirmed for this year’s HD remaster was an option to use the buttons rather than motion controls and now it’s outlined further quality-of-life changes in a new trailer.

For starters, Link’s helper character Fi will be noticeably less talkative than she was in the original game. One of the biggest complaints fans had was Fi regularly interrupting the flow of the game to tell Link what to do or where to go next.

For the remaster, Fi will now only appear during specific cut scenes and other predetermined points. Otherwise, her assistance will be purely optional, as she is summoned by pressing a button. It also appears that the handle of Link’s sword will glow if she ever has some advice for a given situation.

Another big gripe players had were the constant reminders of what every collectable item Link could pick up was. Whenever an item is acquired for the first time, a brief animation plays alongside a text box describing the item in question.

But, in the original game, every time you loaded up your save file, these would reset, meaning you had to sit through the animation and description again. Thankfully, this will no longer be a problem in the remaster, so the game won’t keep informing you what rupees are.

Those two are possibly the most prominent quality-of-life updates, but the game will also feature an enhanced framerate of 60 frames per second for smoother gameplay, as well as the option to fast forward through dialogue and skip cut scenes.

In addition, according to Nintendo Life, Nintendo has confirmed a few other updates not mentioned in the trailer. For instance, it specifically says that the tutorial dialogues can be skipped and that ‘introductory player tutorials have been refined to be less intrusive.’ Clearly, even Nintendo knows those opening tutorials are a slog to get through.

And lastly, there will be an auto-save feature alongside the option to save manually. So, if you ever find yourself suddenly needing to put the game down, you no longer need to make a desperate beeline for the nearest save point.

There’s no mention of the new quick travel feature though. In case you missed it, this feature will only be available to you if you purchase the Zelda & Loftwing amiibo. At the time of writing, there has been no confirmation that the feature can be unlocked in-game without the amiibo, which costs £21.99.

It sounds like Nintendo is doing everything it can to make Skyward Sword a more streamlined and enjoyable experience, but time will tell whether this changes the perception of its detractors.

The Legend Of Zelda: Skyward Sword HD releases for Nintendo Switch on July 16.