Buildings can be powerful symbols when they house the seat of government power. We realized that when the mob seized the U.S. Capitol building yesterday. Blood was spilled, and pro-Trump followers stormed inside. The rioters tossed aside the American flag and raised the banner of Donald Trump supporters over the building. The whole world watched in horror — or, worse, derision — as the seat of American power was desecrated.

We’ve seen this kind of fighting over symbolism before throughout history, like when the Reichstag was burned in Berlin during the Nazi era and the act was blamed on communists. Adolf Hitler used scapegoating to consolidate power.

In Vietnam during the Tet Offensive, Viet Cong guerrillas attacked and took over the U.S. embassy in Saigon in 1968. In that battle, the Viet Cong were defeated, and yet the fact that they took over the seat of American power amid a long-running war sent a message to the world. The U.S. wasn’t winning the war, as the propagandists had argued, and it was only getting bloodier.

So this moment in history isn’t like just any other protest. It’s not like someone looting a Gucci store in Los Angeles. It is an ugly day we’ll remember for its good and bad, a day when seditionists tried an insurrection to overthrow the American government after incitement from the commander-in-chief, who wants to overturn the results of a free and fair election. It is a day when Democrat and Republican senators voted 93-6 to affirm the election of Joseph Biden and Kamala Harris to the highest posts in the land. The House also acted, and Congress certified the Electoral College results. But 147 members of Congress voted against certification.

The majority affirmation of the election results was a rare moment of unity, where Biden supporters could agree with Republicans like Mitch McConnell, Lindsay Graham, and Mitt Romney. Former Trump enablers jumped off the sinking ship and acknowledged it was over. Trump had lost.

And while Trump could not completely derail the election, he continued to tell lies about his “landslide victory” that was stolen through voter fraud by the Democrats. He offered no evidence that could stand up in any court, and yet he did not stop his lies. He used the false claims to get his followers to cause mayhem and fracture the republic. He represents a clear and present danger to peace in the United States, and he should be removed from office. 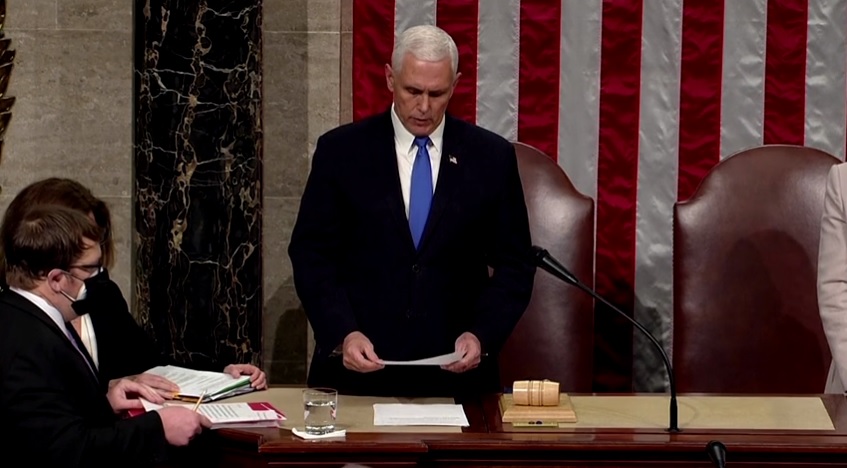 For generations to come, people will remember this point in history as an opportunity for the people to rise up and act to restore the rule of law and remove an unfit man from office. We’re at a tipping point, and we want history to tip in the right direction.

Vice President Mike Pence should invoke the 25th Amendment and remove Trump from office, as he is unfit to serve. Beyond this week’s events — including his taped call pressuring the Georgia secretary of state to overturn the election — Trump has over four years refused to accept the results of the election, fomented hate and defended racists, attempted to use the powers of his office to force Ukraine to investigate a political enemy, interfered with the Russia election-tampering investigation, wrecked our relations with allies, embraced autocrats, and endangered the country in its worst health crisis by encouraging people to deny COVID-19’s existence and to dismiss science. Trump has encouraged white privilege and demonized hard-working immigrants.

Twitter has suspended his account on the basis of three tweets that both incited violence and repeated lies about the election. That is as it should be, and the social media service should consider revoking his account for good. Facebook has removed videos of him encouraging his riotous supporters, and it has banned him indefinitely.

You may call this censorship. That is undemocratic, but it has to be weighed against the cost of disunity in our nation. Trump’s treasonous assault on truth, his inflammatory attacks on “fake news media,” and his failures in the pandemic have withered our sense of well-being and injured our nation’s collective mental health. He has spread lies and effectively yelled “fire” in a crowded theater, which is one of the tests for when courts will allow a curb on the First Amendment.

Are the tech, game, and enterprise industries affected by his policies? Yes. He has used vindictiveness to strike back at TikTok, forcing it to be sold after its users made a fool of him and took all the tickets for his rally in Oklahoma, leaving an empty stadium. He has used capricious policies to strike at Chinese companies from Huawei to China Mobile, without consistency. He has lined the pockets of his friends or pardoned those who have committed crimes on his behalf. Rather than draining the swamp, he has reintroduced cronyism and corruption to business.

Trump is more like a mobster than a national leader, and his actions have hurt the reputation of the United States in the world, and that has hurt American companies. He has set up our industries for retaliation, and that could put them behind in global competition. He has spurred talented people to leave the country or to block them from coming here, because of his racist border policies. And he has harmed the reputation of the country as a place that supports and nurtures white supremacists and suppresses the black population. None of this is good for global business at a time of intense competitive pressure. By protecting the Constitution, we can protect our economy and all of the companies within it. 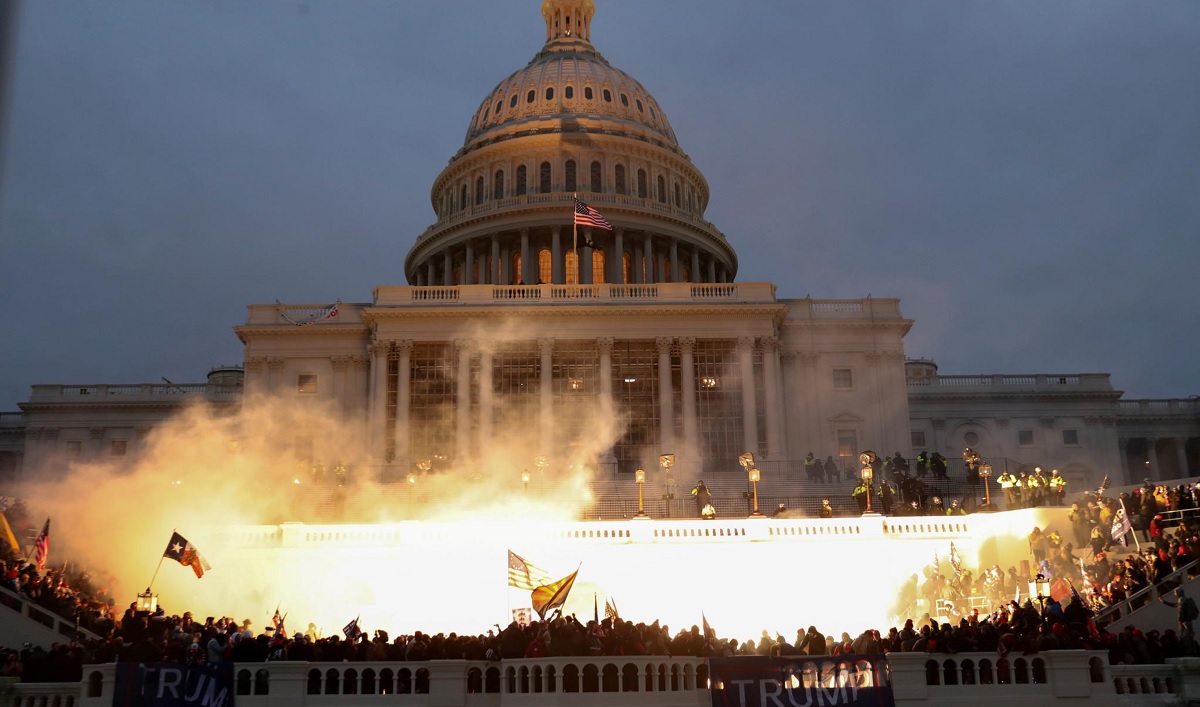 Above: The U.S. Capitol under siege.

Of course, why listen to me, a video game writer? This may seem like it has little to do with my day job as a tech and video game writer, working for a website that publishers news about business, technology, games, and the enterprise.

And I say this as a journalist who believes in freedom of speech and democratic institutions. It is my responsibility as a citizen to give voice to my concerns and incite us all to step up and confront lies with truth. When our country was in the midst of World War II more than 75 years ago, people failed to stand up and speak for fairness amid wartime hysteria. The U.S. government interned my father, a young boy, and many members of my family in incarceration camps along with 110,000 other Americans of Japanese descent — without the due process guaranteed to American citizens.

We learned from that time to protect the underdogs and stand up for civil rights for those who are vulnerable. We learned to protest the abuse of power and fight through the legal system for what was right. Decades later, my father’s generation ultimately won an apology and compensation from the U.S. government for the wartime wrongs. That was how the system worked.

And it can work again as we can urge both Democrats and Republicans to work in unity and live up to the responsibilities of their oaths and invoke the 25th Amendment, throwing Trump out of office and stop him from rallying the forces of fascism, dictatorship, and oppression. There may be only 14 days he has left in office. It may be easier to forget about him. I am aware that it will only happen if the Republicans take the initiative to unseat him. He has acknowledged he lost, but he can easily go back on that claim. Congress should stop him from running again if possible, and impeach him as well if that’s what it takes to achieve that.

But failing to act amid such obvious sedition will only encourage more in the future, by Trump or those who learn from his example.

Related posts:
Hot News
Pokemon Will Never Be As Ambitious As It Was In 5th Gen
Uniliga – Die Playoffs in CS:GO starten! – Uniliga
Die besten Spiele zum endlos Grinden – Gaming
How To Defeat Ixillis In Remnant: From the Ashes
PSA: Use Genshin Impact’s Hypostatic Symphony Event As A Buffed Statue Of The Seven
Recent Posts
This website uses cookies to improve your user experience and to provide you with advertisements that are relevant to your interests. By continuing to browse the site you are agreeing to our use of cookies.Ok