How To Use Spelltable To Play Magic The Gathering Over Webcam

Throughout the pandemic, Magic the Gathering players had to develop new ways to play their favourite game. While Arena is a great alternative, nothing beats the feeling of playing with your paper deck, and for that fans came up with Spelltable. It was such a hit that Wizards of the Coast quickly acquired it, and now it's the primary way of playing paper Magic online.

Although physical play is gradually opening back up (Covid variants permitting…), Spelltable is still a fantastic way to play with people you're not physically near. Here's how to get set up with Spelltable and make use of its best features. 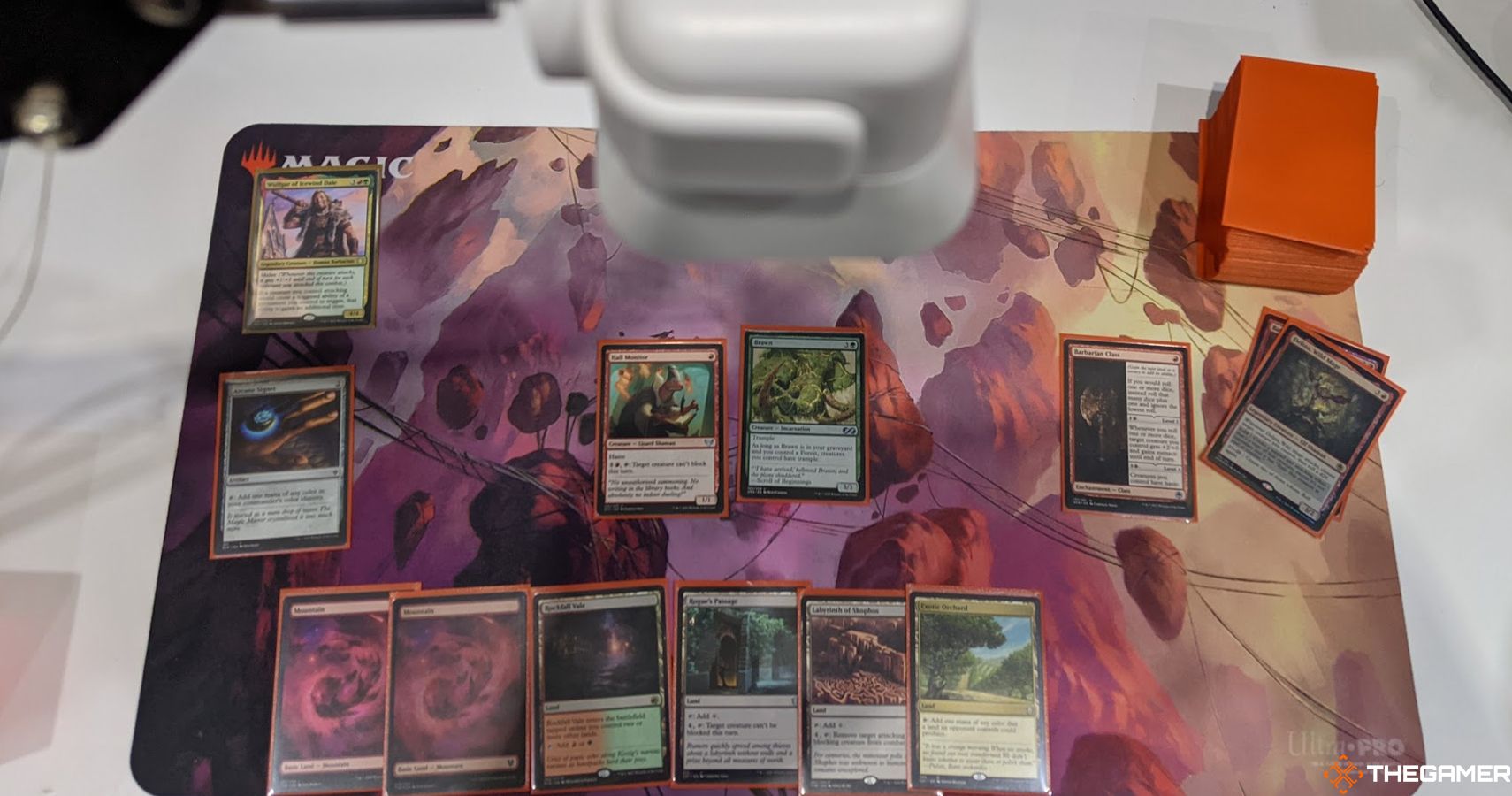 Spelltable is a tool for playing tabletop, paper Magic over the internet. For that, you'll need a few things: 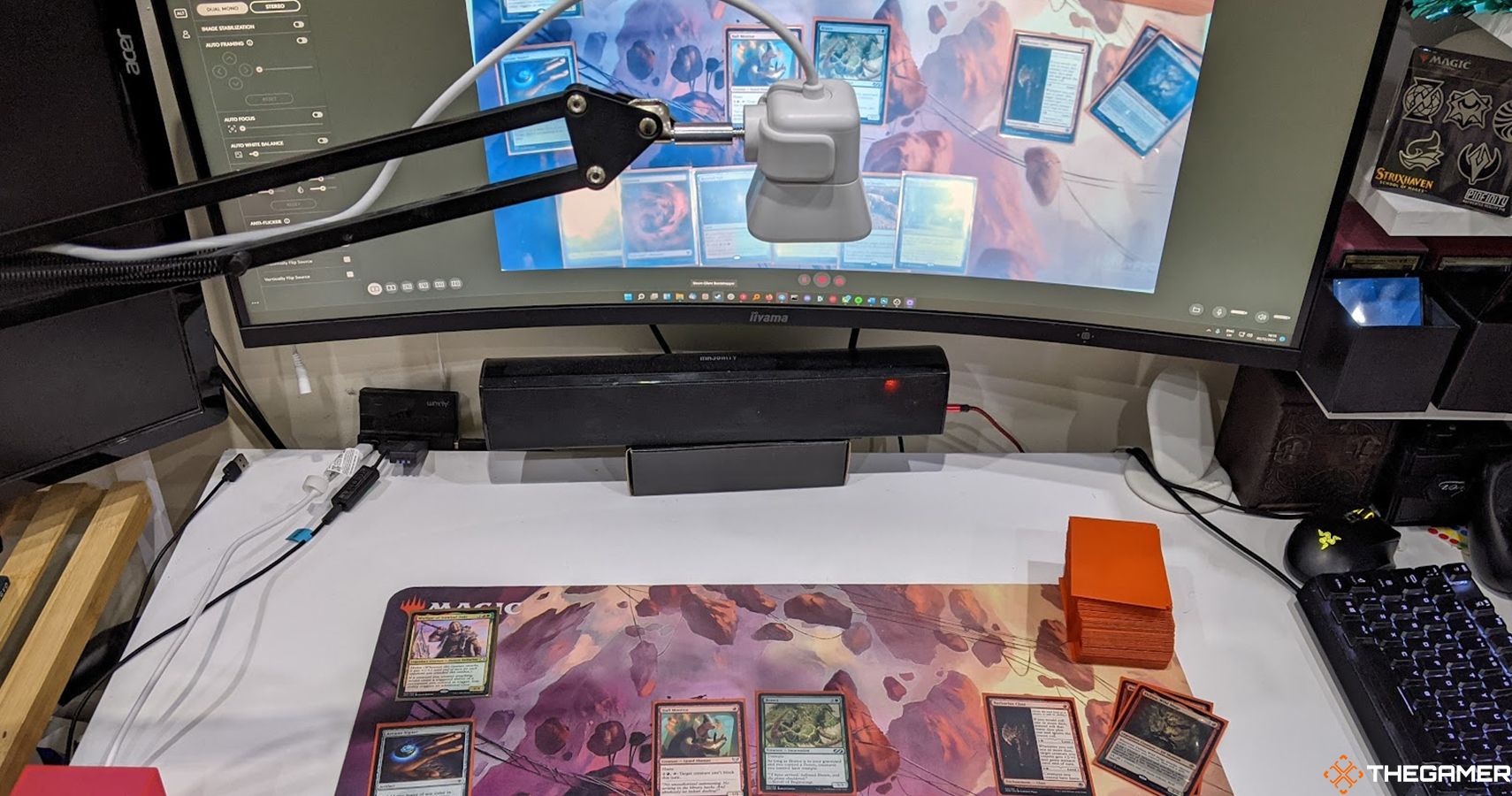 First, you need to set your playing space up. The goal is to have a camera suspended above your desk, pointing down at your cards.

First, if you haven't got one already, make a Wizards of the Coast account and use it to log in to Spelltable. From there, you can click on your icon (by default, it is the first two letters of your name) in the top right corner and set up the rest of your profile. Adding an icon and a language are good ideas, but it's heavily, heavily recommended you add your pronouns to make it easier for the rest of the table to communicate with you while also making it a safer space for those who'd normally feel unwelcome to list their pronouns. Your pronouns will be shown in brackets next to your name on the main Spelltable game page.

Most newcomers to Spelltable use their phone and a booster bundle box. Cut a diagonal slot in one half of the bundle box and prop it up on the other half to turn it into a stand to our phone in position. Alternatively, you can use a dedicated webcam. Either put it on some boxes or invest in a webcam boom stand, and you'll have much better image quality and still have the use of your phone for checking things like rulings on Scryfall or Gatherer. 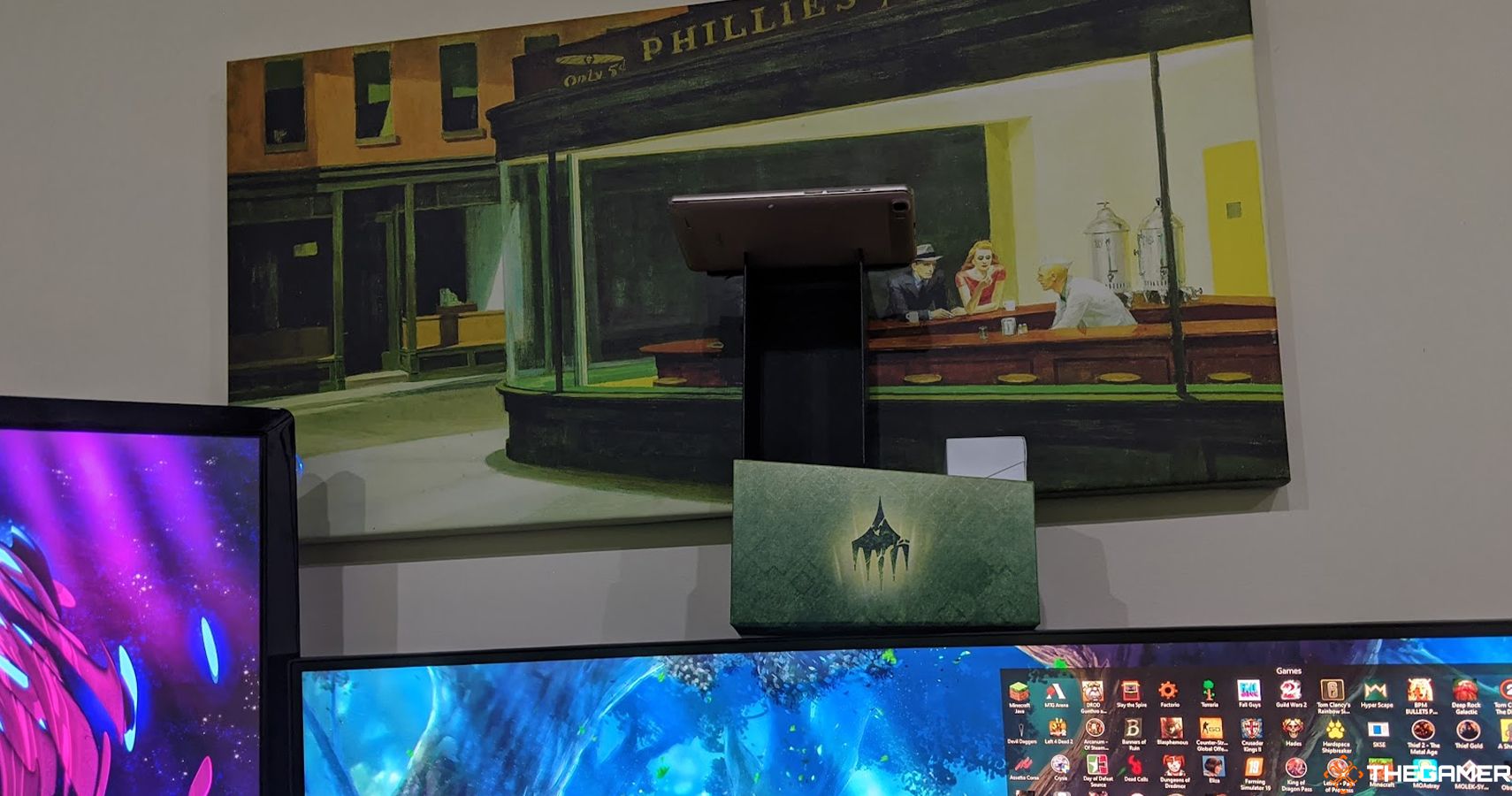 If you're using your phone as a camera, you will need to tick the box that says "Use mobile device as a webcam" that appears when joining a game, and open the same link to the game on your phone. Log in to the Wizards account on both your phone and your main device, and the phone camera will be used instead of a webcam. This is easier to set up than a webcam, but it also comes with a slightly decreased image quality and a higher chance of connection problems. If you like Spelltable, it's heavily recommended that you upgrade to a webcam setup.

Note that, unless you set up some impractical system involving mirrors, you won't be able to use your laptop's built-in camera, as you need to be able to see the screen at the same time. 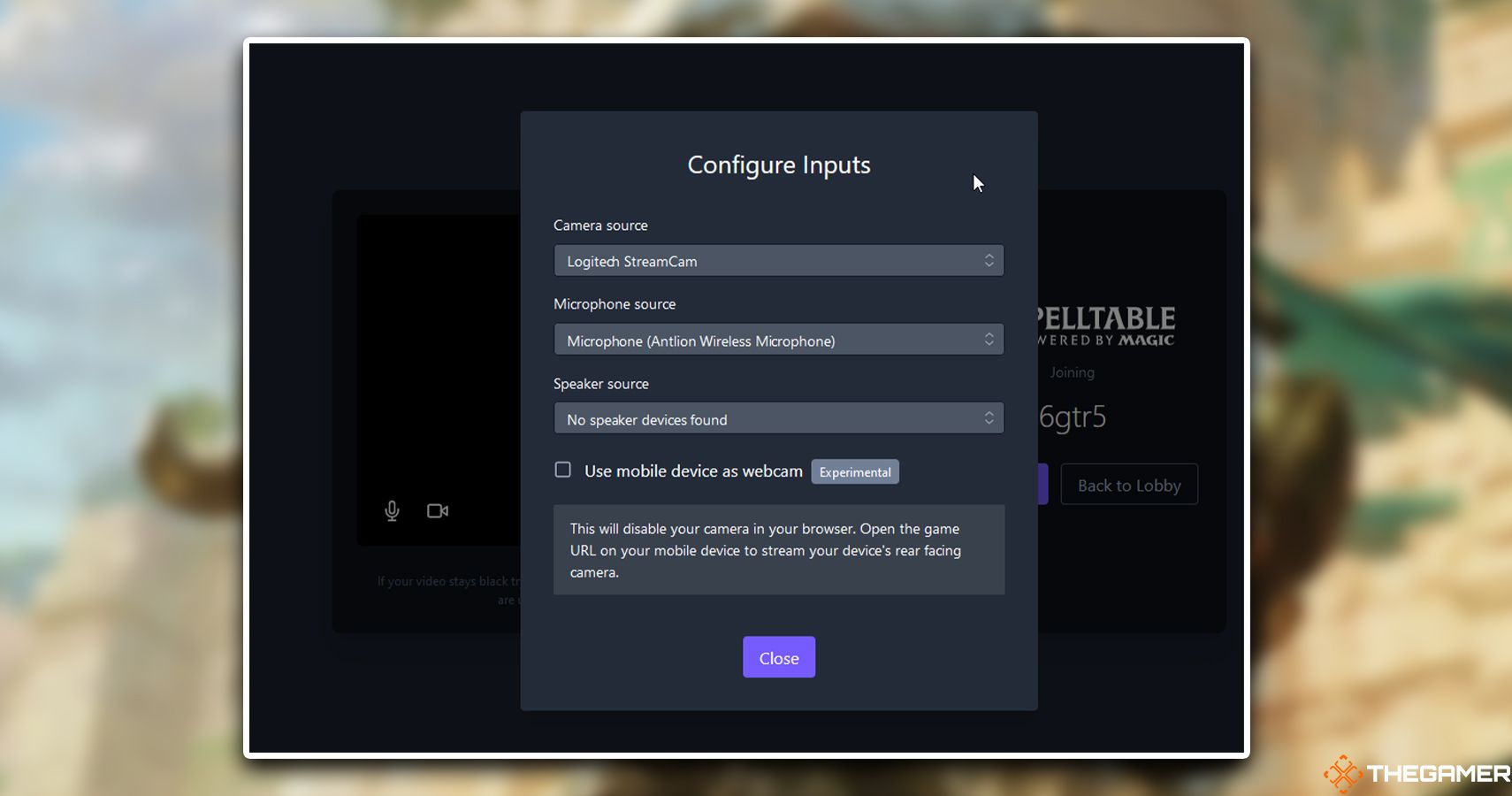 No matter what device you're using, make sure your lighting isn't causing too much glare on your cards. This is trickier when playing with sleeves, as they naturally reflect light more than a naked card, but glare makes cards completely illegible for the rest of the table. Ideally, you'll have flat lighting across the whole of your play space, although you don't need to worry too much. Don't go setting up an entire professional studio for the sake of playing Magic.

Once you have your view how you like it, go to the official Spelltable site (spelltable.wizards.com), log in to your Wizards account, and you'll be met with the Lobby screen. From here, you can either join a random public game that looks appealing to you or create a game for yourself. Public games are good ways of getting quick and easy games going, but you'll also have the unknown elements of playing with strangers who may not necessarily accurately gauge the power of their deck.

When creating a game for yourself, you have the option of giving it a name, picking the format, and whether or not you want the game to be public. Spelltable is primarily built for the four-player Commander format, but it also supports a wide range of other formats like Modern, Legacy, Two-headed Giant, Pauper, and Standard. 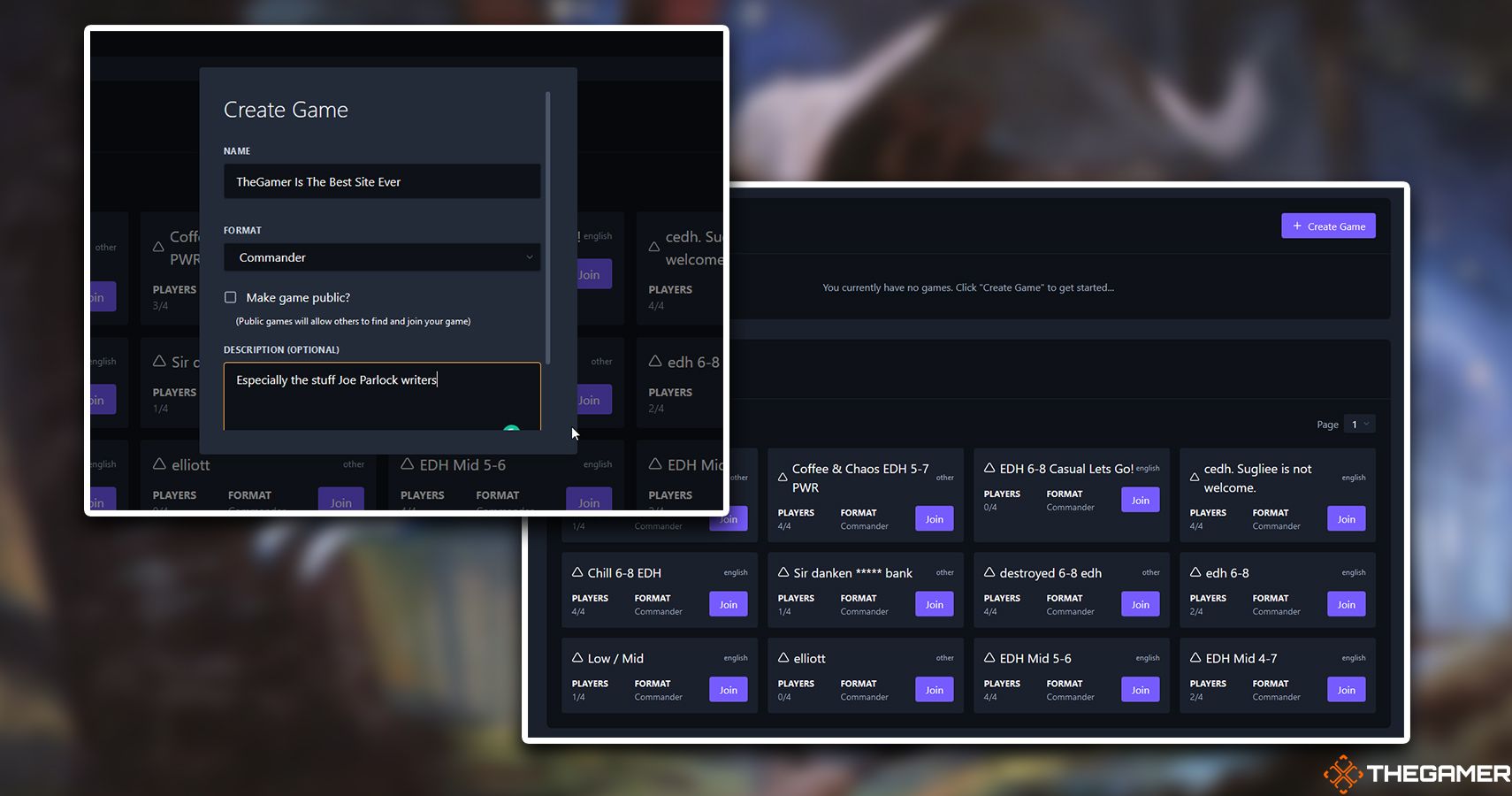 When your game is made and you're ready to invite your friends, all you need to do is copy the URL in your browser window and send it. Your friend (or you, if you're the one being invited) can click the link to join the game directly instead of having to go through the Spelltable lobby page.

Your browser should ask you for permission to access your camera and microphone, and once you've granted them Spelltable will then ask you which devices you want to use for input. This is where you'll need to tick the box to use your phone if you are, but otherwise, it's a case of clicking your webcam and microphone and then entering the game. 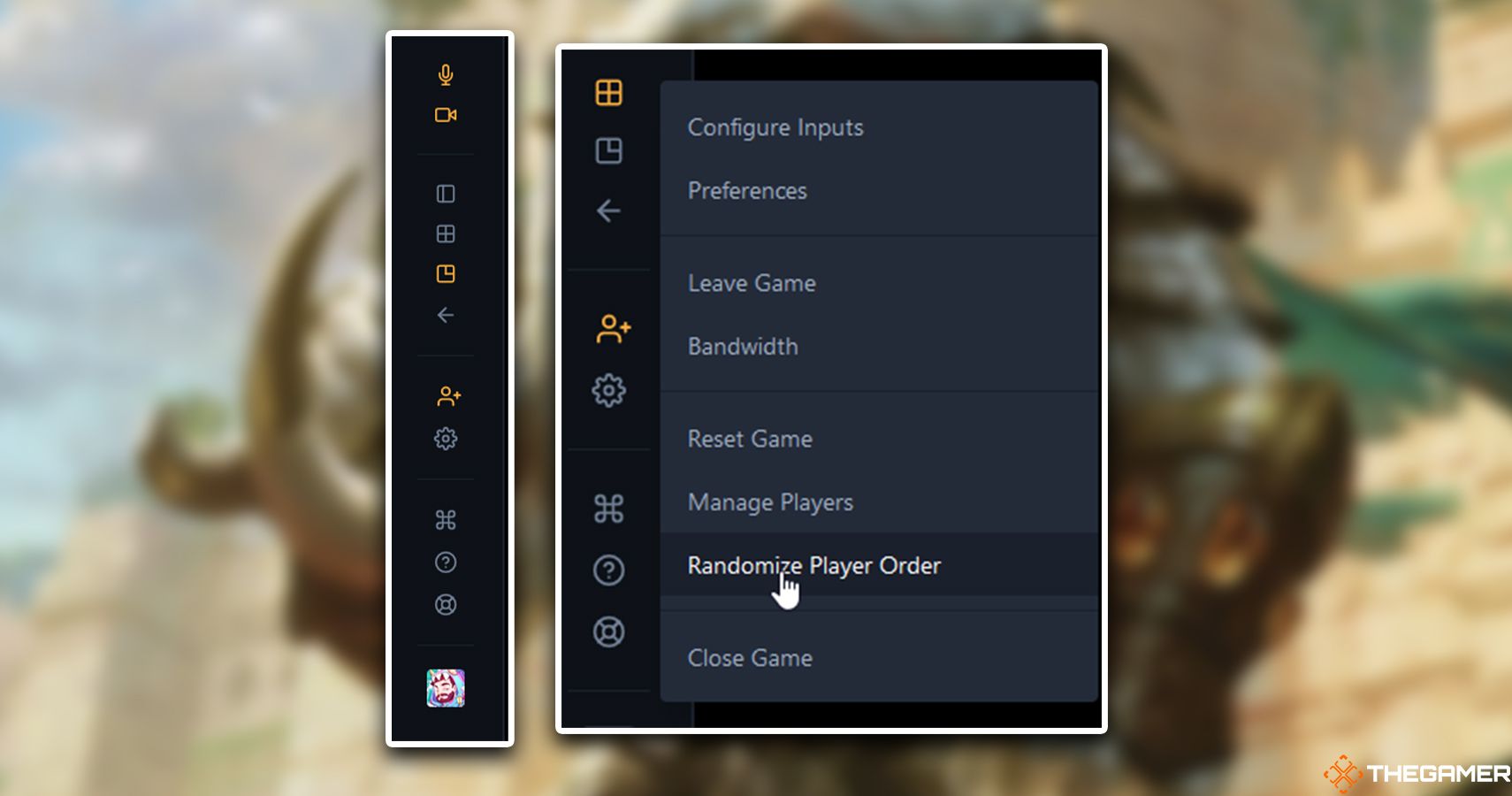 Your first time on the Spelltable game screen can be a bit overwhelming.

The first thing you'll want to do is acquaint yourself with the menu on the left of the screen. In the first section, you can mute and unmute your microphone and hide and unhide your webcam. Note, though, that hiding your webcam and lead to players suspecting you of cheating, so it's best to avoid doing that if at all possible.

The next section of the menu is all about the different views for the game itself. The default is the four-corner layout, which shows all four players at the same time. This one is perfectly fine, especially on larger displays, but you may want to try out the focused layout or picture-in-picture layouts, which show the active player as the largest view and the rest of the table in smaller windows.

The next section is where you can quickly find a link to invite players (though the URL in the browser window is the same thing) or access your settings. The game's host can reset the game or designate turn orders through the settings. The bottom section is help and features a quick guide on using Spelltable and access to change your profile if you forgot to do so before joining the game. 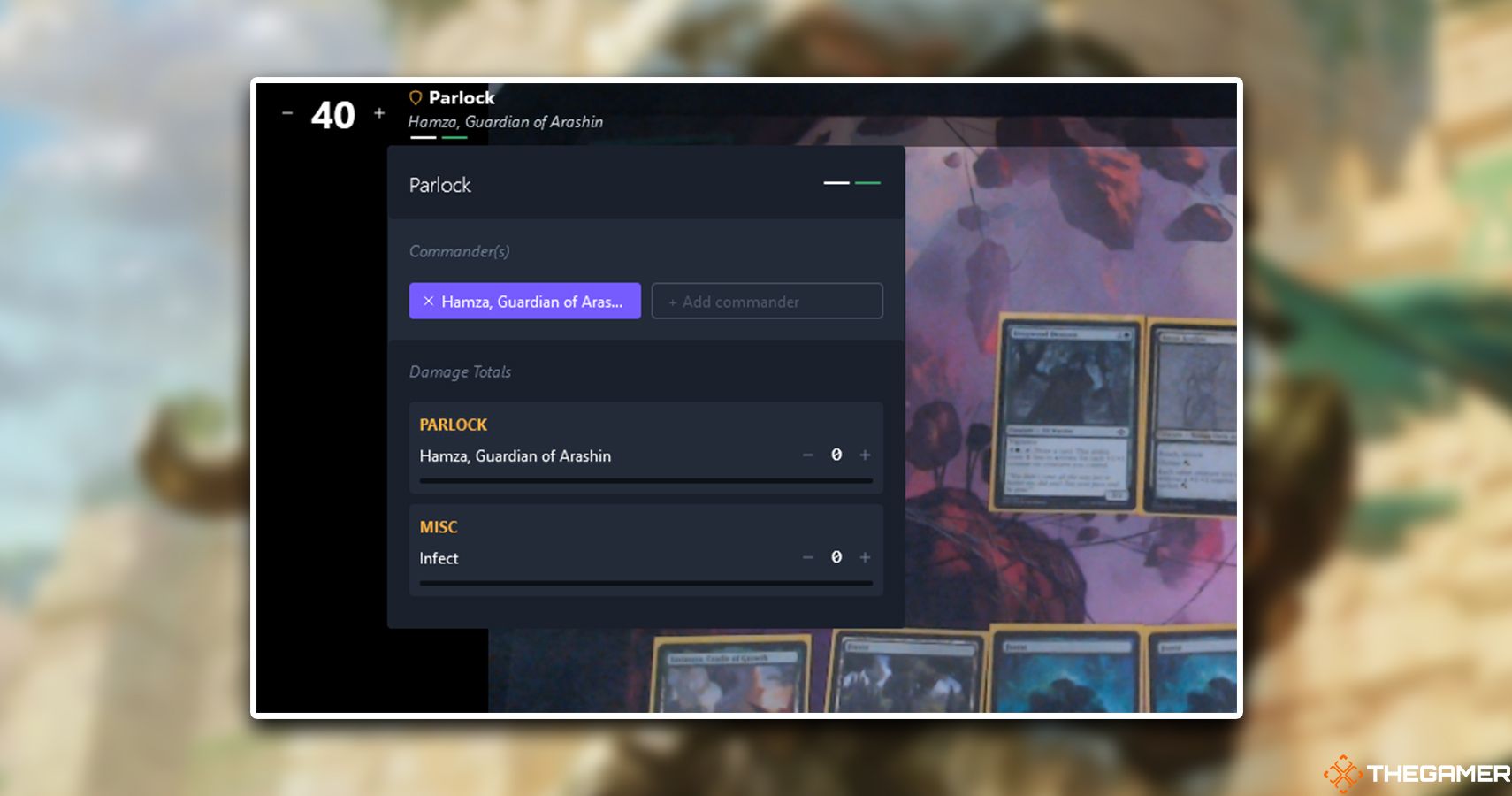 With the side menu sorted, it's time to look at the Commander menu. This is mainly for the Commander format, but also tracks things like Infect damage for other formats too. Under your name, there should be an italic "Click to add commander(s)". By clicking that, or your name, you'll open a menu that lets you add your Commander or add any other tracked damage like Infect or Commander damage. Make sure you do this before the game starts so the rest of the table can brush up on what your deck is likely to do.

While playing, you can adjust your life total by clicking the plus and minus buttons to the left of your name. Alternatively, you can click the total and type it in directly, which is useful for if you've lost or gained a lot of life all at once. You can also use the keyboard for this: the up and down arrows change your life by one, while holding shift simultaneously does it by ten instead.

When you've finished your turn, press the space bar. This moves the active player identifier (a border around their view) to the next player, and helps everybody keep track of whose turn it is. Many games tend to have a designated turn tracker whose job it is to press apce, while others rely on each player remembering to do it themselves. 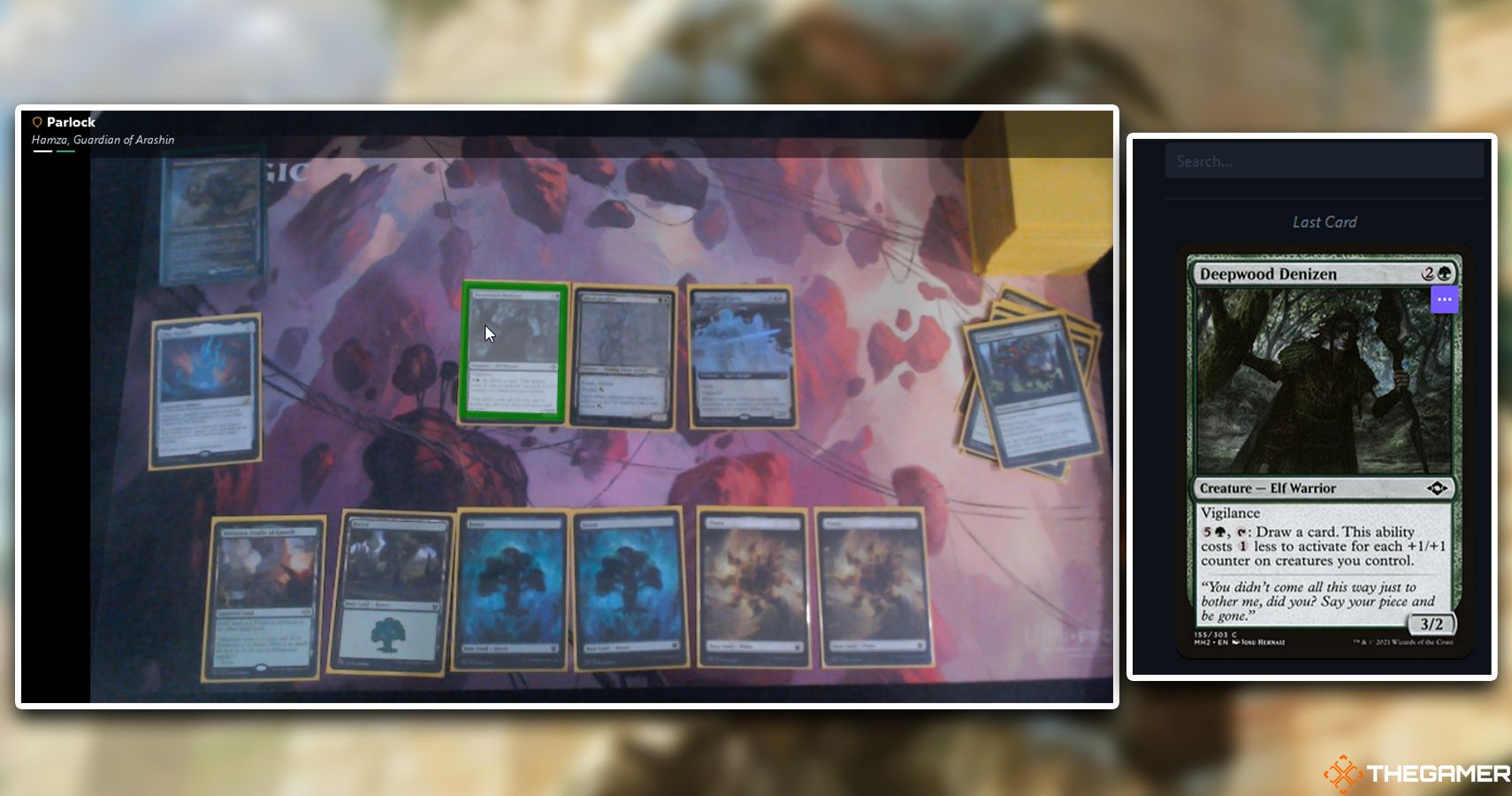 The thing that sets Spelltable apart from simply using Skype or Discord is its card-identifying tools. In any game, double-clicking on a card on someone's camera will open up a high-res version of it on the right of the screen. This feature is why it's so important to have decent lighting and camera quality, as otherwise, the AI either struggles to detect the card or thinks it's a different card entirely.

From the right menu pane, you can see a history of all the cards you're checked, and by clicking on the three dots, you can open it up on the official Magic database, Gatherer, to see rulings surrounding the card. This is really helpful for disagreements on what a card does, as most questions about obscure rules interactions are already answered on Gatherer.

If clicking the card fails to find it, there is a search bar at the top of the menu. Ask your opponent what the card is, and type it in there to quickly check for yourself what it does. It definitely beats asking people to hold cards up to the camera all the time.

Tips For Playing Over Spelltable 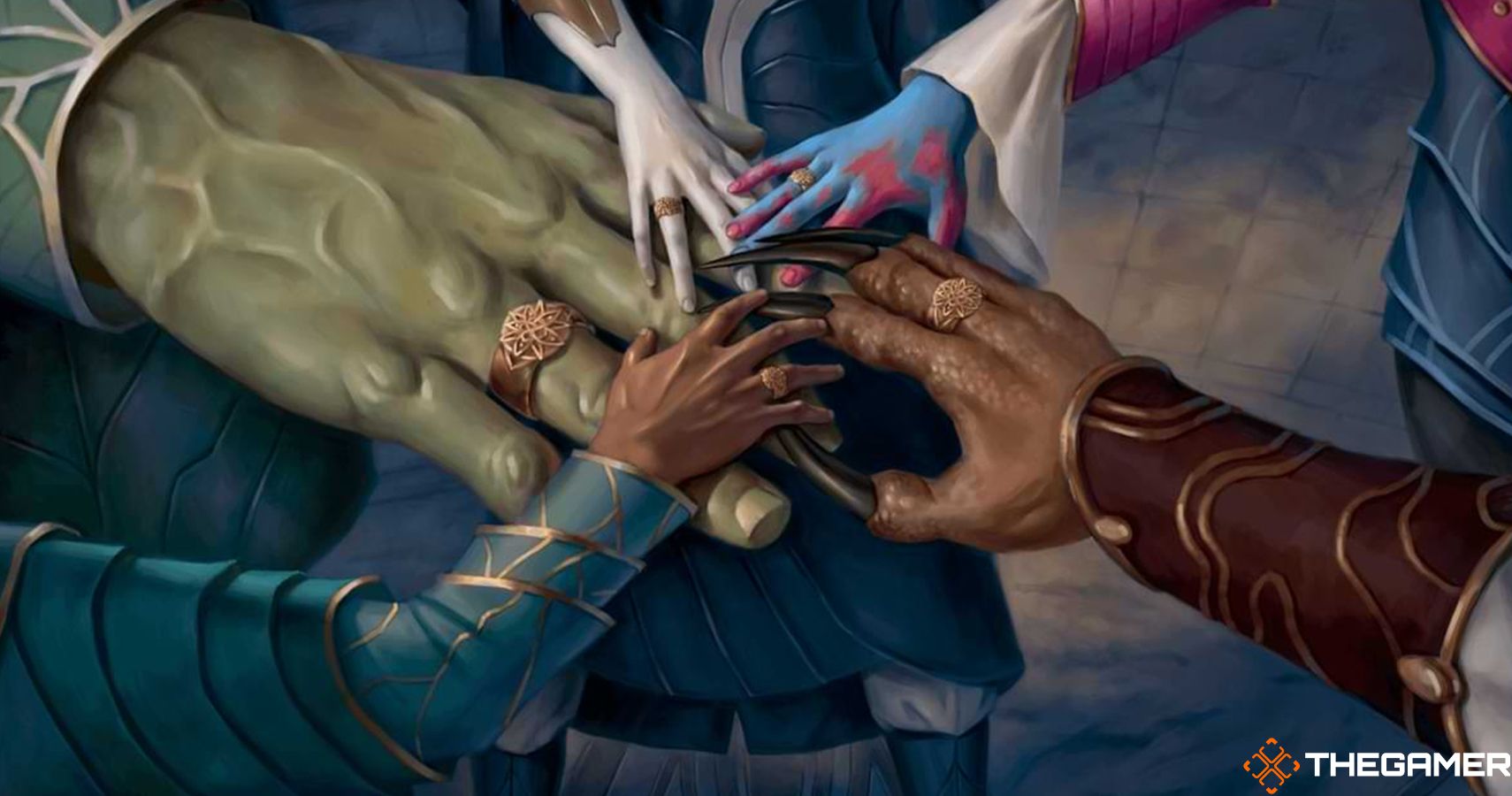 Playing over webcam is a different experience from playing in person, and you'll need to change some of your habits.

First, take things a lot slower. Say the name of the cards as you're playing them, and if it's a less frequently used card, take a minute to read out loud the card's ability text. People can't see your table as well as in paper, so walking everyone through each of your steps is much more critical. In the same vein, avoid using too much of the everyday Magic slang with a table who may be unfamiliar with it – you and your friends may know what pinging Steve means, but other people don't. You need to make webcam games as straightforward as possible for everybody involved.

Likewise, you need to be more forgiving when playing webcam Magic. For example, somebody may attack you not realising you have a creature that could kill them – in paper this is their mistake and you can be a bit less lenient, but over webcam it's considered good etiquette to explain what's on your board before they commit to a decision. Leave the 'gotchas' for the counterspells.

It's essential to keep your graveyard, deck, and exile pile in view of the camera at all times. When shuffling, shuffle in front of the camera, and cut the deck a few times to show the shuffle was genuine. If you need to take the deck out of shot for a while (such as looking for a card), put your hand face-down on the table where the other players can see it.

Don't be afraid to ask about public zones in the game, like the battlefield and graveyard. Having people run through what they have may seem awkward and time-consuming, but everybody is in the same boat and shouldn't begrudge you for asking about things you'd normally just look at yourself in in-person play.