Getting started in Hearthstone is a relatively painless process. The modern game provides a regular supply of incentives to keep playing, and will constantly provide new and interesting cards, mechanics, and even modes. Going beyond those beginner steps is a little bit harder to do, however, as there is simply so much to take on a larger scale.

Picking a class to learn is always a good idea, and Shaman isn’t a bad place to start. Understanding what cards are at your disposal is step one, and then building a deck is a pretty good second step. However, how do you know which cards are good? That’s where we come in. We’ve compiled a list of some of the best cards Shamans have access to right now.

There are way too many cards to list here, so we have picked a diverse selection of Spells, Effects, Minions, and Rarities. This is not intended to be a guide to deck building. 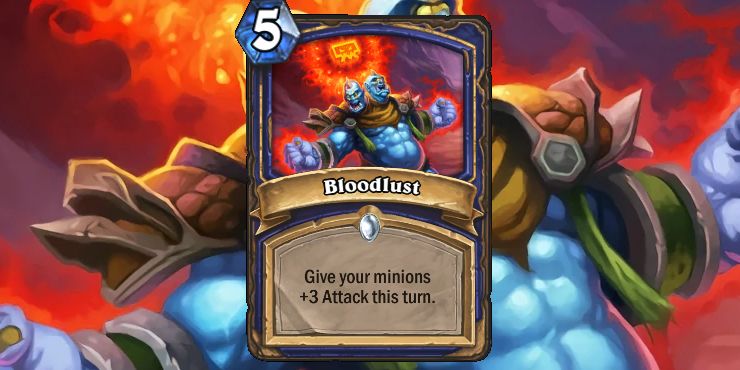 Bloodlust is an absolute classic. Many decks over the years have used Bloodlust in a number of ways to complement their decks. It also just so happens to be a very simple card to grasp, and gets exponentially better based on your board state. It can often be seen as a ‘win more’ card, but that simply isn’t the only way this card can be used. Its only downside is its cost. 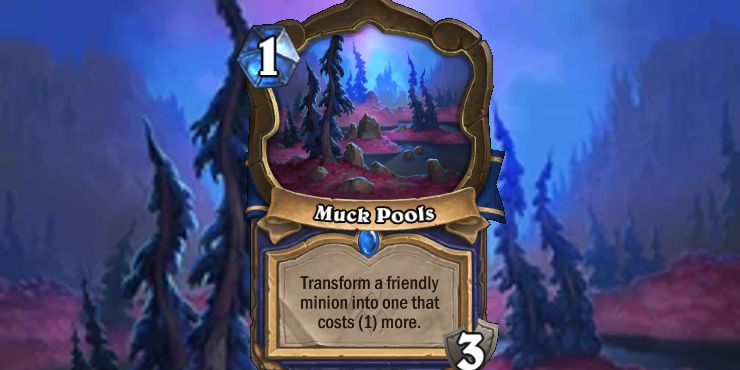 Moving onto something a bit more modern, we have the Muck Pools. Muck Pools is one of the newest card types to be introduced into the game – Locations. Not all Locations are good, but Muck Pools absolutely falls into the category of ‘great’. This is because it has a pretty stellar effect. Plonking this down and being able to upgrade any of your minions to a more expensive minion is excellent. Sure, it can give something worse from time to time, but play potential with this card more than makes up for it. 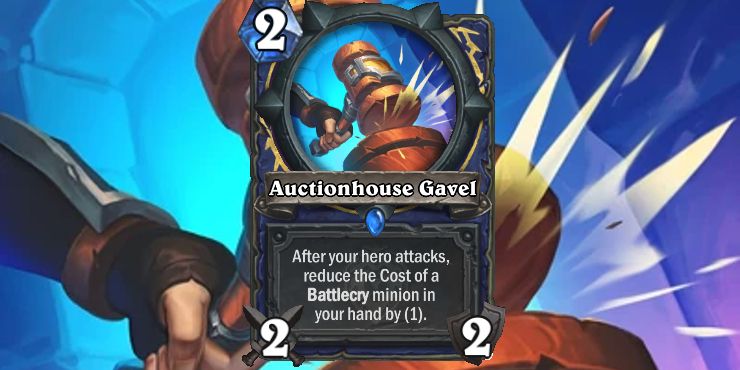 We love Auctionhouse Gavel because it has such an interesting effect that combos very well into a number of other cards the Shaman has access to. Its stats are nothing special, but it's also fairly cheap, making it a half-decent pick purely for the stats. Where it shines is in its ability to make Battlecry Minions cheaper. This effect stacks if you get two swings in, letting you ramp up to more powerful minions quicker than most of your opponents. 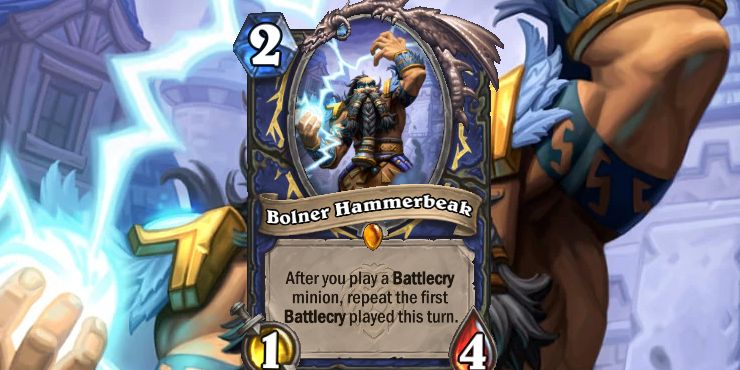 Following up from Auctionhouse Gavel is Bolner. This Legendary is very cheap at 2 Mana and has a Health-heavy statline. What makes Bolner great is his synergy with Battlecry units. With Bolner on the field, you start to repeat Battlecries every time you play Battlecry units. This can lead to some incredible turns, and it combines beautifully with Auctionhouse Gavel since it enables those big Battlecry-heavy turns. 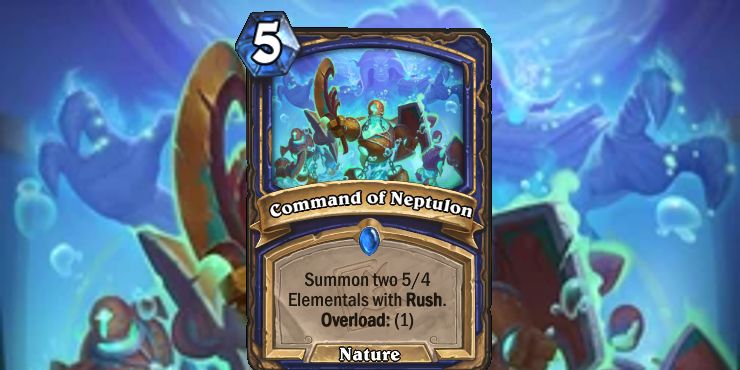 Overload is an interesting mechanic that allows the Shaman to produce very powerful spells and minions with a low initial cost. The trade-off is the ‘Mana debt’ you accrue. Having too many Overload cards can lead to you borking your turns, but there are some well worth the investment and Command Of Neptulon is one of them. 5 Mana to summon 2 beefy Elementals with Rush? Incredible value. 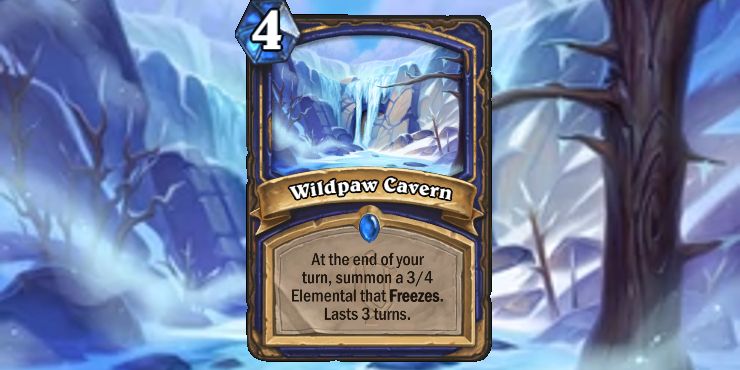 Speaking of Elementals, Wildpaw Cavern lets you summon more of them for a low cost. The downside is you are summoning fairly weak Elementals, and for 4 Mana, your first Elemental isn’t really worth the price of admission. Over the three turns it lasts though? The value is very high. Don’t forget that each Elemental also has Freeze, so they are especially frustrating to kill in combat. 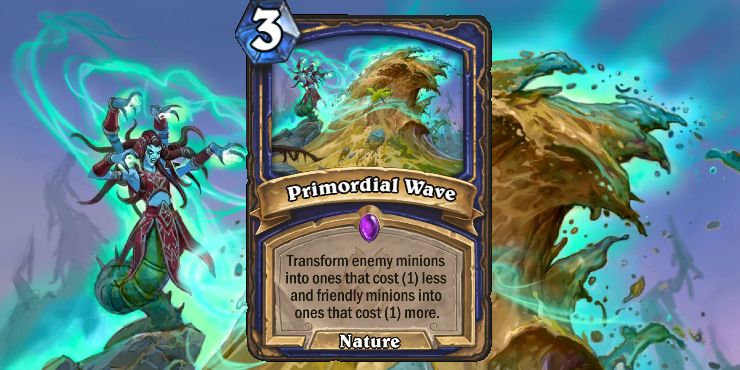 Primordial Wave is the great equaliser – or more accurately, it is a complete crap shoot that is usually in your favour. Similar to Muck Pools where you randomly Evolve a minion into a more expensive one, Primordial Wave does this to all of your minions at once. Not only that, but it also affects your opponent's minions and turns them into cheaper ones. The results of this card can be absolutely wild, but for the cost, it is outstanding. 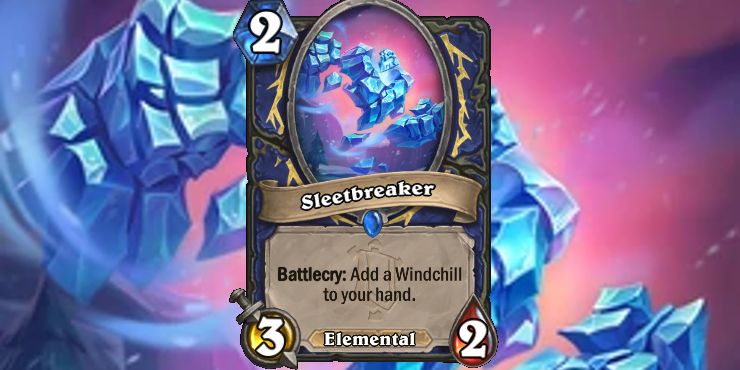 Any minion card that draws you a card on play is worth considering in any deck. Now Sleetbreaker doesn’t quite have card draw, but it does have something very comparable by generating Windchill. Windchill is a great spell to have chilling in your hand, and Sleetbreaker is a pretty good value 2 Mana minion in its own right. There is a lot of value in this card, and it can probably find a home in most decks. 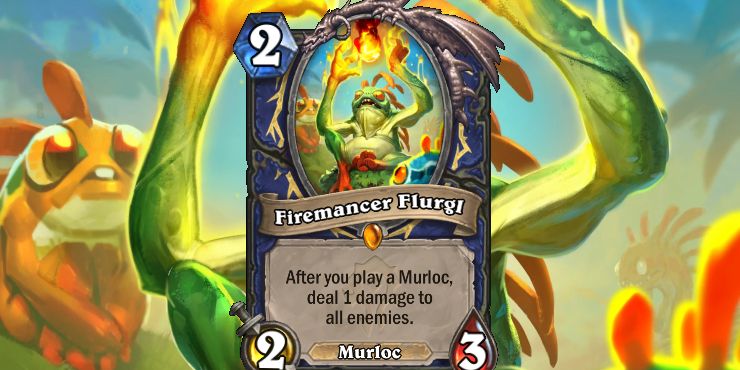 We have kept away from Murlocs – up until now. Shamans have always had a positive relationship with this ‘Race’, and whilst many Murlocs end up being Neutral, Firemancer Flurgl is actually a Shaman card. For a low entry price, this guy has a solid body and his effect can wipe boards without much hassle. This card is a must-take in any Murlock deck. 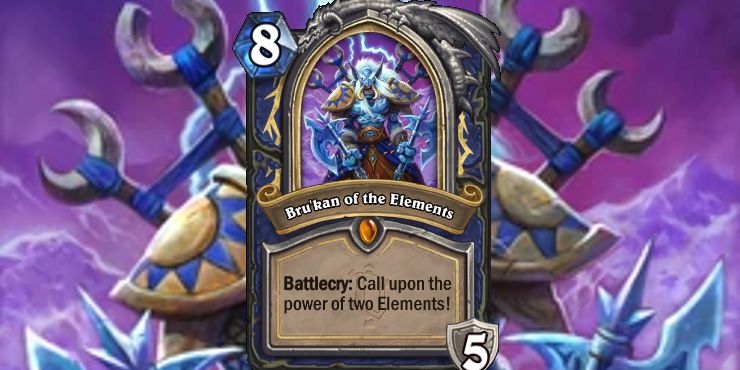 Cards that change up your Hero have gotten more common as Hearthstone has aged, but not all of them are worth taking. In the early game, they were a bit slow. Bru’kan Of The Elements doesn’t have that issue. His Battlecry is very powerful, and your new Hero Power is a massive step up from the already-great Totem summoning of Thrall. Taunt, Healing, Damage, and AOE are all smooshed together in one great card. Nearly every Shaman deck should consider this card.