Elevate your enterprise data technology and strategy at Transform 2021.

Google is bolstering its cloud credentials with a new subsea cable spanning from the U.S. East Coast to Argentina, with additional touchpoints in Brazil and Uruguay.

Firmina, as the cable is called (named after Brazilian abolitionist Maria Firmina dos Reis), represents the 16th submarine cable Google has invested in, and the sixth it has funded entirely on its own dime.

The announcement comes as cloud infrastructure services spending has gone through the roof, with businesses across the spectrum embracing digital transformation due to the global pandemic, while remote work has increased demand for cloud-based services.

The so-called “big three” public cloud companies — Amazon’s AWS, Microsoft’s Azure, and Google Cloud — all reported significant growth in their last quarter’s results. However, Google trails its rivals in terms of cloud infrastructure services spend, with a reported 7% share versus 32% for AWS and 19% for Azure. And that is why, partly at least, Google continues to invest in a vast network of subsea cables.

“Without the Google network, it wouldn’t be possible to deliver products like Gmail, BigQuery, and other Workspace and Google Cloud products at the quality of service that users expect,” a Google spokesperson told VentureBeat. “Our cable systems provide the speed, capacity and reliability Google is known for worldwide. At Google Cloud, our customers are able to make use of the same network infrastructure that powers Google’s own services.”

It’s estimated that subsea cables carry 98% of all internet traffic today, and for Google they are vital arteries in its quest to increase speeds and lower the latency for its billions of consumer and enterprise users globally.

“Google-funded subsea cables allow us to plan effectively for the future capacity needs of our customers and users around the world, and add a layer of security beyond what’s available over the public internet,” the spokesperson added.

Firmina will run a similar trajectory to its existing Monet cable, except Firmina will stretch from the U.S. to Las Toninas in Argentina, with connections in Punta del Este (Uruguay) and Praia Grande (Brazil). 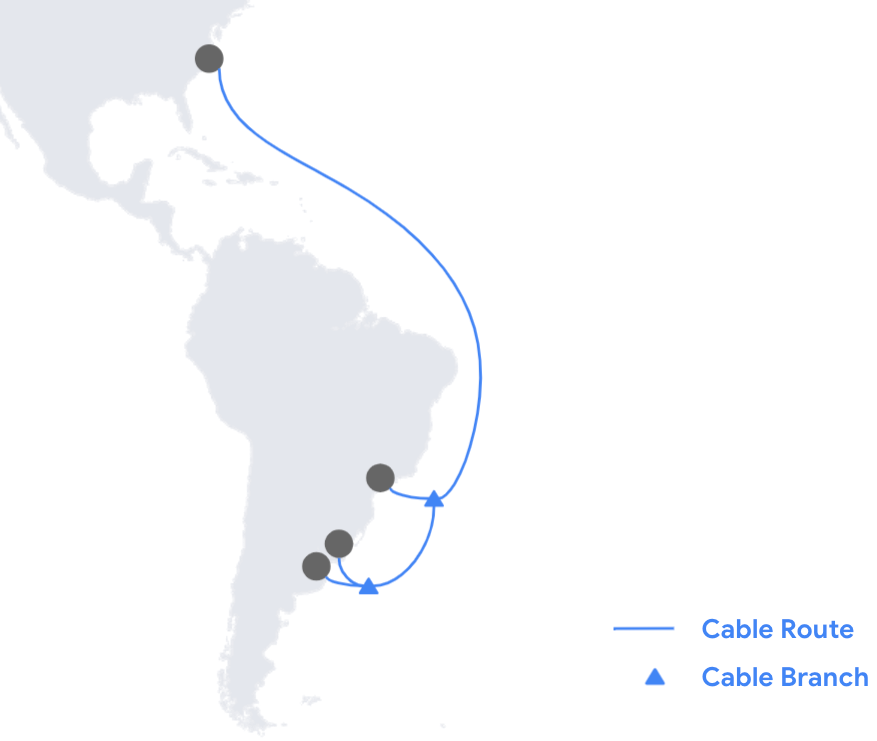 According to Google, Firmina will be the longest cable in the world capable of running from a single source of power — this has significant ramifications for uptime and resilience, as it safeguards the cable should one power source be damaged by shipping or fishing.

“The single-end power feeding capability helps increase reliability,” the spokesperson said. “It’s similar to two-engine planes designed to fly with only one working. With cables, ideally one end is able to support the entire system, in case of faults at one end of the cable.”

While single-end power is fairly common in shorter submarine cables, as the cable gets longer, this increases the power consumption required. To counter this, Firmina receives a 20% higher voltage than previous systems, according to Google.

“Increasing the electrical power deliverable from shore is a very complex challenge, because it doesn’t simply affect the power-feeding equipment at the shore, but the entire cable — and all fiber pairs — need to be qualified for higher voltages,” Google said. “Firmina employs, for the first time, new power feed equipment that can use higher voltage, delivering more power to the cable from a single end.”

Today’s announcement comes just a few months after Google’s third privately-funded subsea cable went into operation, spanning 3,977 miles from Virginia Beach in the U.S. to Saint-Hilaire-de-Riez, France. The company’s fourth (Equiano) and fifth (Grace Hopper) are expected to go into operation in the next year or so.

Google hasn’t revealed exactly how long Firmina will be upon completion, or when it will go into operation.