To a certain extent, all fighting games are rhythm games. With the perfectly timed button strings, the balletic twirls of the thumb sticks, and the magnetic dance with your opponent, fighting games are extremely musical. God of Rock tries to take that a step further, and is both a rhythm game and fighting game at once. It’s a risky genre mashup, but in doing so it ended up as my most anticipated title from the whole of Gamescom.

I had a hands off demonstration of the game, in order to see how the mechanics are meant to work, followed by a chance to get hands on in order to see how badly I suck at it. I was encouraged initially, both by watching and playing, to completely ignore the fighting portion of the game – I’ll get to my thoughts on that below, but for now, I’m going to ask you to follow that advice. On the bottom of the screen there’s a bar like the Guitar Hero fretboard, where you must push each button as it lines up with a circle. In doing so, you can swing punches and block blows from your opponent- the more you miss, the fewer hits you land and the more vulnerable you are to damage.

Each character has various specials too, which all impact the fretboard mechanic. Some will speed up or slow down your opponent’s bar, throwing off their rhythm, or will place extra buttons to press or some landmines to be avoided. Then there’s the ultimate attack, which works in various ways – my favourite was a character with paint cans who would spray the opponent’s fretboard, obscuring their view. Everything is incredibly busy, and the fact that you only need to look at the bottom third of the screen is freeing in some ways, but concerns me in others. It takes the head-to-head battles from Guitar Hero 3: Legends of Rock and stretches that concept across an entire game. 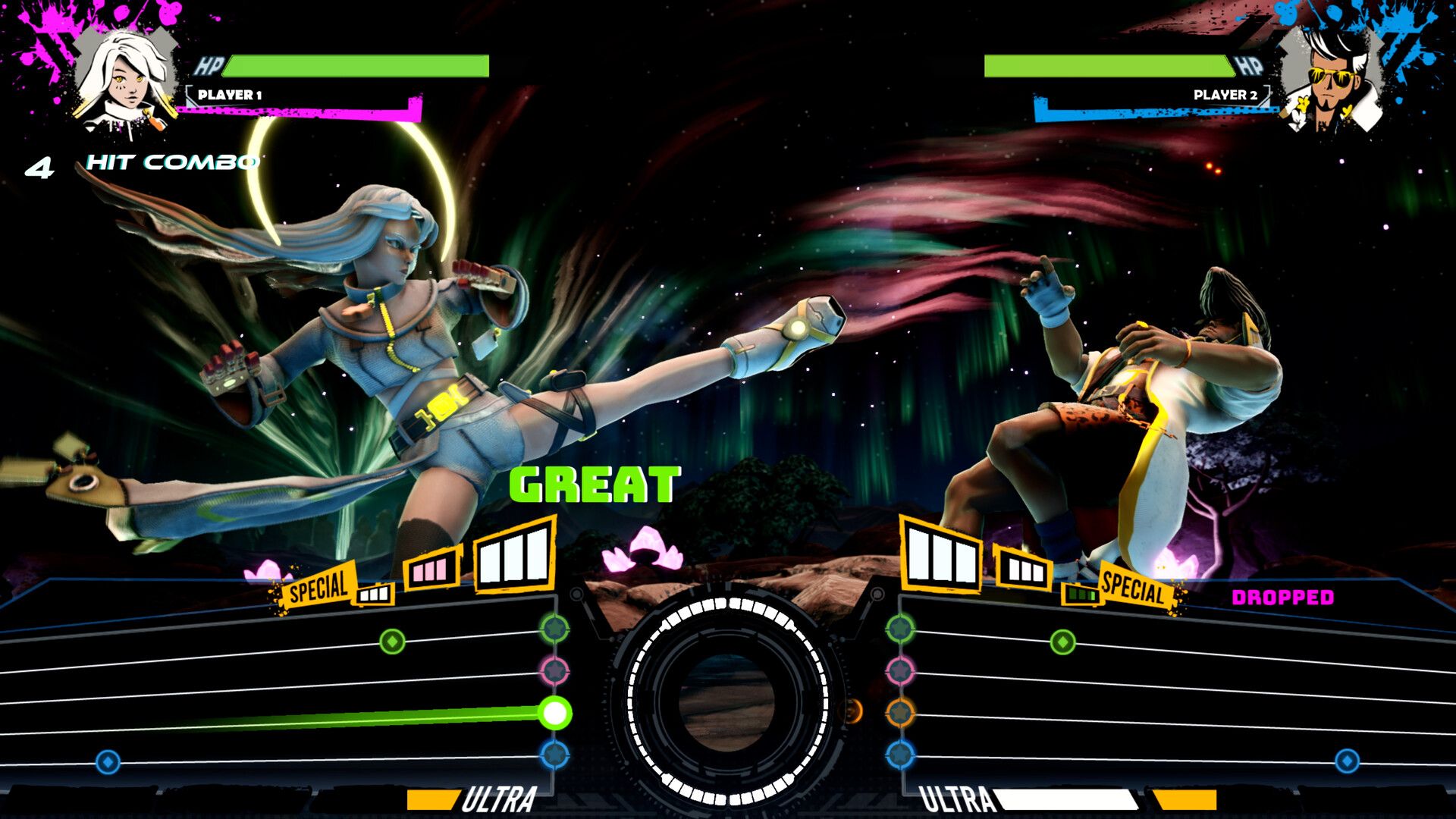 The very top of the screen is a health bar, as you might expect in a fighting game, but as this also exists at the bottom where the button prompts are, you never need to look at it. The bulk of the screen is taken up by the fighters themselves, who’ll launch into various attacks, blocks, and dodges, but since you don’t technically control them, you don’t need to look at that either. It’s a little like in Guitar Hero when the band is playing on stage behind all of the musical notes – it’s all just a way to frame the musical mechanics.. I’m sure in time I’ll get better at looking at the whole screen, and I’m not sure I mind it in the first place, but it does mean the 50/50 balance between fighting and rhythm feels lopsided in rhythm’s favour.

Despite my concerns that the game isn’t using all of the screen for gameplay (is that even a complaint or an observation?), God of Rock was the most fun I had across Gamescom. The staff at TheGamer regularly play fighting games together (I wrote this little beauty after my clean sweep in Tekken), and God of Rock feels like the perfect game for that mix. It plays like a rhythm game, but with all the competitive bite of a fighting game. I don’t think it’s complex enough for EVO, but it has far more of an edge than you’d expect from a rhythm game. When I played with the devs it was mostly to get to grips with how it worked, but when they played each other you could see the drive within them, both bragging about prior wins, reminding each other of previous scores to settle. Regardless of how it plays, God of Rock is most definitely a fighting game. 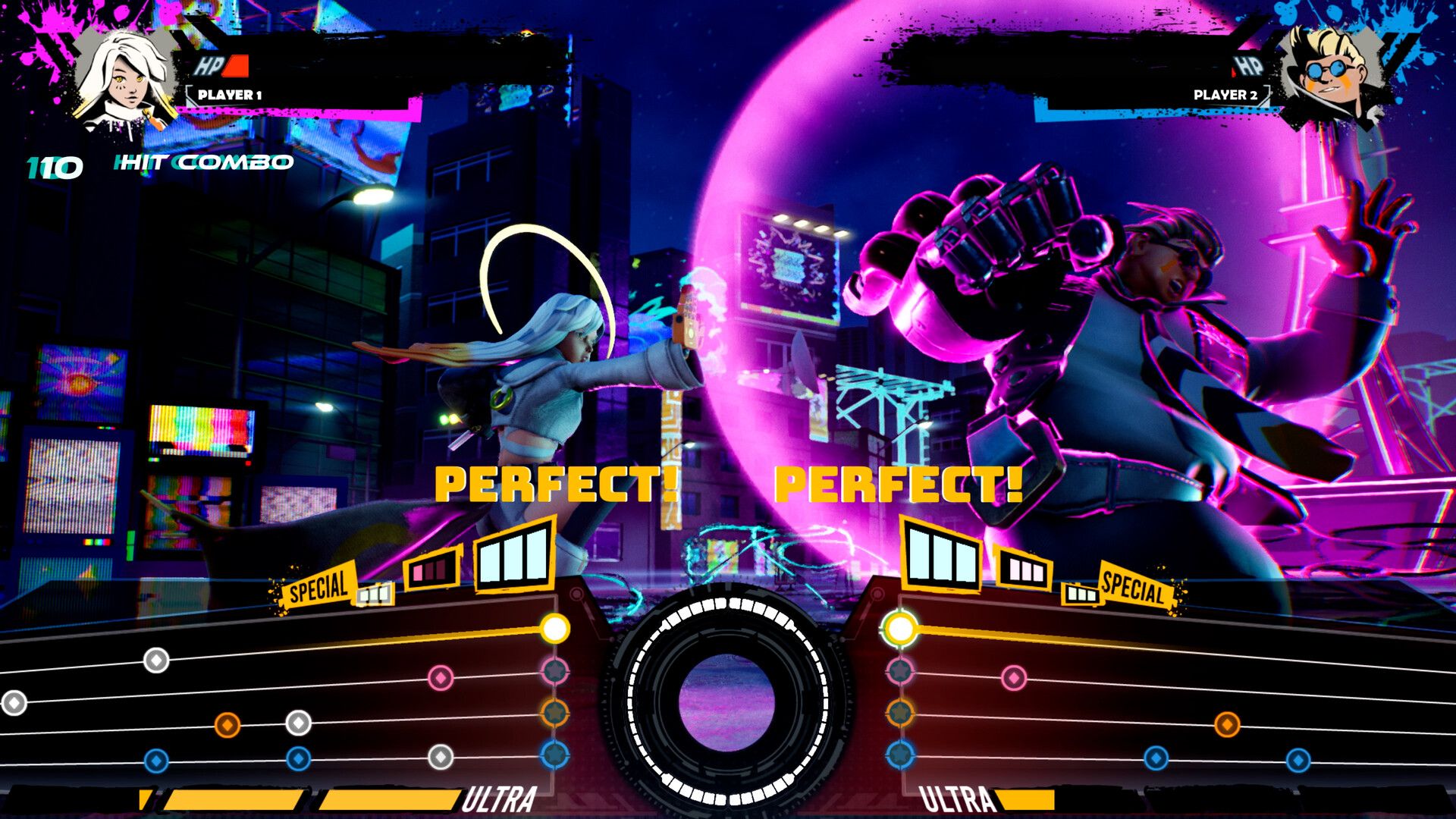 You won’t be rocking out to your favourite hits like in Guitar Hero, however. It features a wholly original soundtrack, which is both impressive and a little disappointing – the familiar songs are a huge draw in rhythm games. The songs are also (true to the game’s name) all rock, though the devs say different types of rock make it varied enough. The characters themselves are based on musical tropes, but inspirations seem a bit wider there with a little bit of hip hop, country, and pop in the mix.

God of Rock seems like an excellent genre mashup, even if it’s more the mechanics of a rhythm game with the spirit of a fighter game, rather than a full blend of the two. I saw a lot of games at Gamescom that were good, but God of Rock is the one I immediately wanted to go away and play with my friends. If it can instil that feeling in others, it will be fine when it launches Winter 2022.