Home » News » Genshin Impact: The Rhythm That Leads To The Gloomy Path Guide

Genshin Impact: The Rhythm That Leads To The Gloomy Path Guide

If you've reached the Sumeru rainforest in Genshin Impact, and started the world quests for this area, you will most likely have a lot of confusion because it's something we've never seen before. The developers knew what they were doing since they gave us an entire book to keep notes in.

At some point, you will be required to embark on a journey to find three Ashvattha's Concourses and get Vasoma Fruits from them. The entire quest will reveal a ton of secrets about different Aranara, and how they did their best to deal with the spreading Marana.

How To Unlock The Ashvattha's Concourses Quest 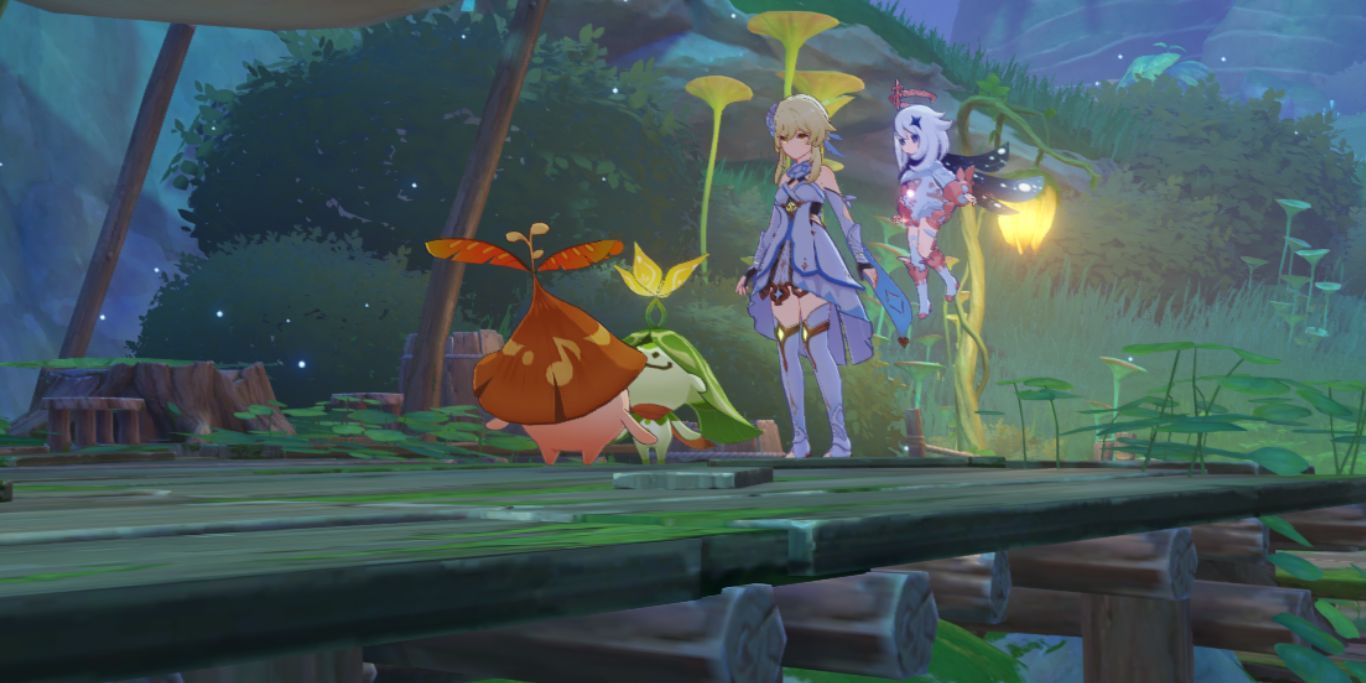 If you're fairly new to the game, it's going to take you a lot of effort to unlock this quest in the first place. You need to get to the Sumeru region which is past Liyue, and you'll have to go through The Chasm to get there. Next, you'll have to find Vimara Village in the Sumeru rainforest.

This will be much easier if you light up the area by interacting with the Statue Of The Seven in Sumeru. Eventually, you'll stumble upon the village, and you can teleport to the waypoint just north of it to start the first part of the Aranyaka quest line.

Initially, you will meet Rana who will introduce you to the people in a small village, including some children. Eventually, Rana will go into a dangerous health state as she tries to save one of the children. The first part of this quest is fairly straightforward, and you'll encounter a Withering zone in it as well.

Once the second part of this quest starts, you will start meeting the Aranara, with Arana being the first one. As you go, you will meet Arama who will tell you how to make the rest of the Aranara less scared of the Traveler, including Araji. Finally, you will be asked to help more Aranara and prepare for Festival Utsava.

Once that dialogue ends, the quest will branch out, and you'll be required to do a bunch of side-quests to continue. Finding three Vasoma Fruits from Ashvattha Concourses is one of them, and this gets integrated with the main quest after you talk to the required Aranara NPC. 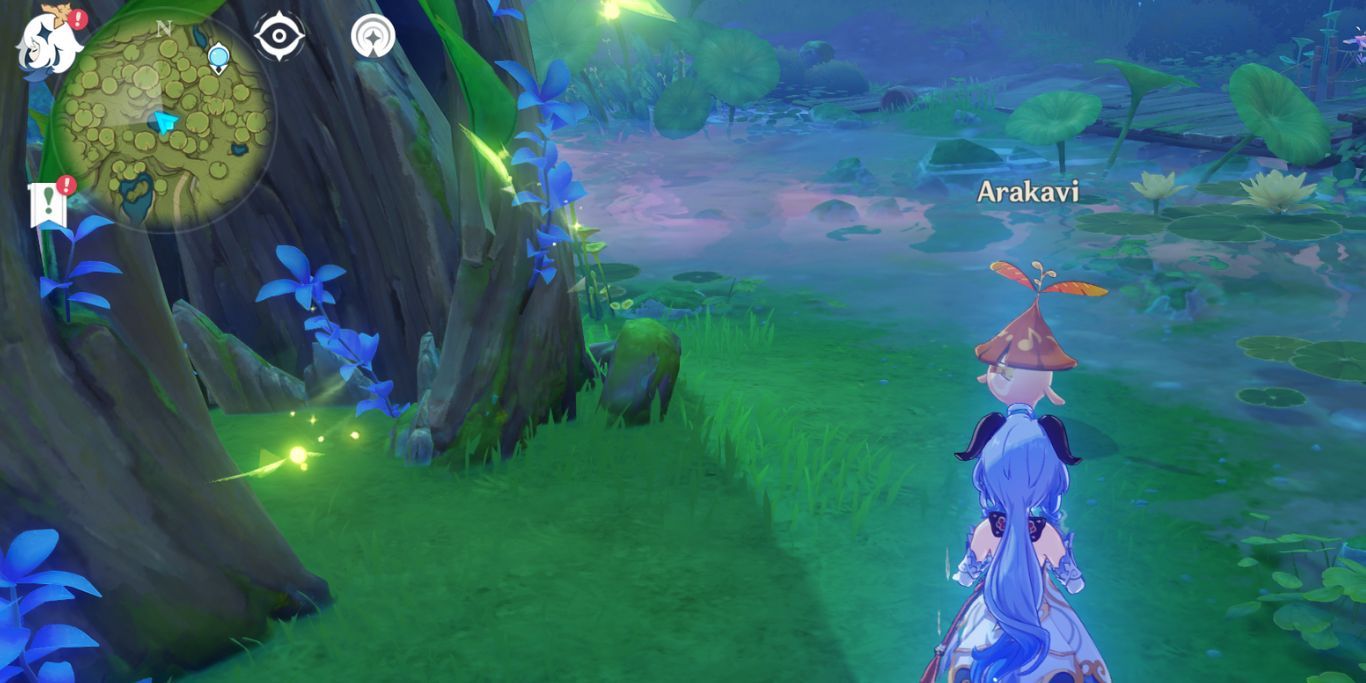 During this quest, you will most likely encounter and unlock a secret Statue Of The Seven. To find Ashvattha's Concourses one, teleport to this Statue and follow the path leading in the southwest direction. As shown on the map, you will find Arakavi near the pond with a big tree branch in the middle.

They might be a little higher near one of the Aranara houses, but you will be able to find the Aranara with the world quest icon on the mini-map.

Once you talk to Arakavi, they will tell you about Arayasa, Aradasa, and Arasudraka who are out searching for the Ashvattha's Concourses. You will unlock three quests after this:

How To Finish The Rhythm that Leads to the Gloomy Path 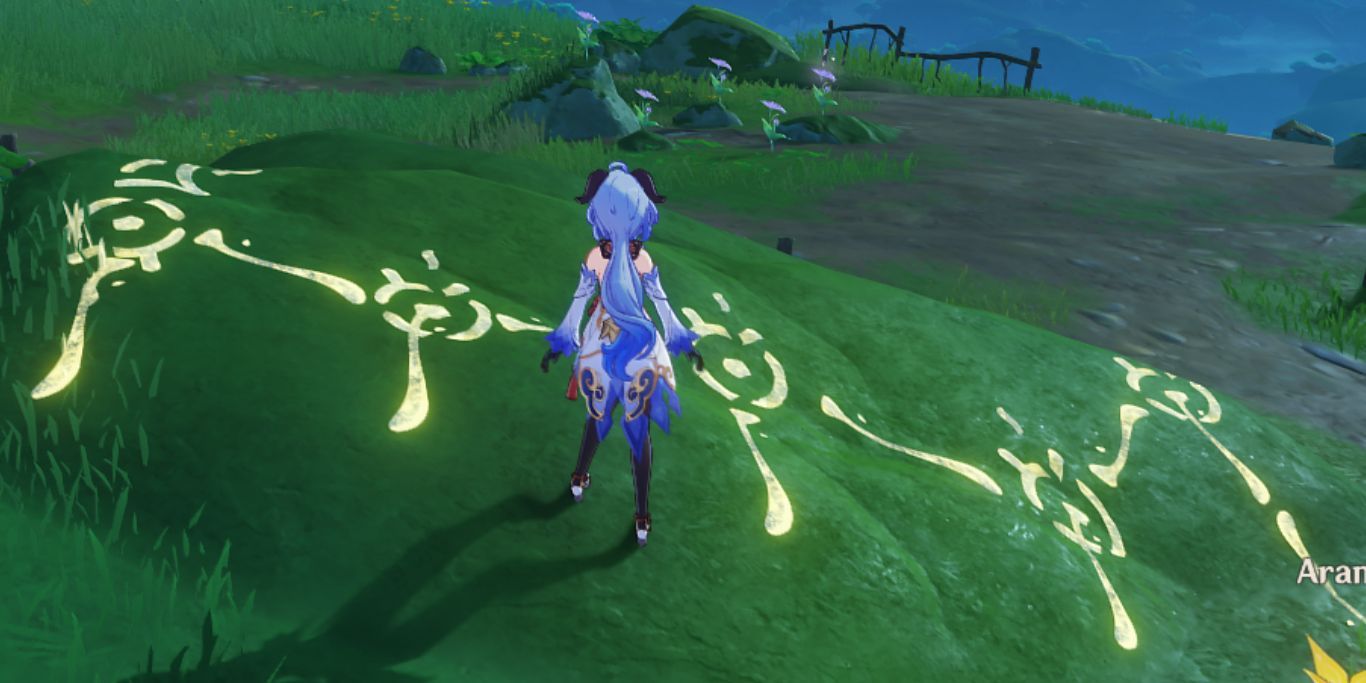 After navigating The Rhythm that Leads to the Gloomy Path quest, an area will be highlighted on the map with a yellow circle. Head to the Teleport Waypoint near Gandha Hill and glide towards the circle. Once you're close enough, you will see Arama standing with another Aranara.

Talk to Arayasa and Arama, and they will tell you about the Ashvattha's Concourse left by a different Aranara. After the dialogue, you need to interact with and study the pattern on the grassy rock, and use perspective to put the flowers in the correct position.

To be honest, this pattern isn't easy to understand as it's very confusing. But, all you have to do to solve this puzzle is move to the place where the shining flower is on the far left in your perspective, and then move around a little until they all light up. 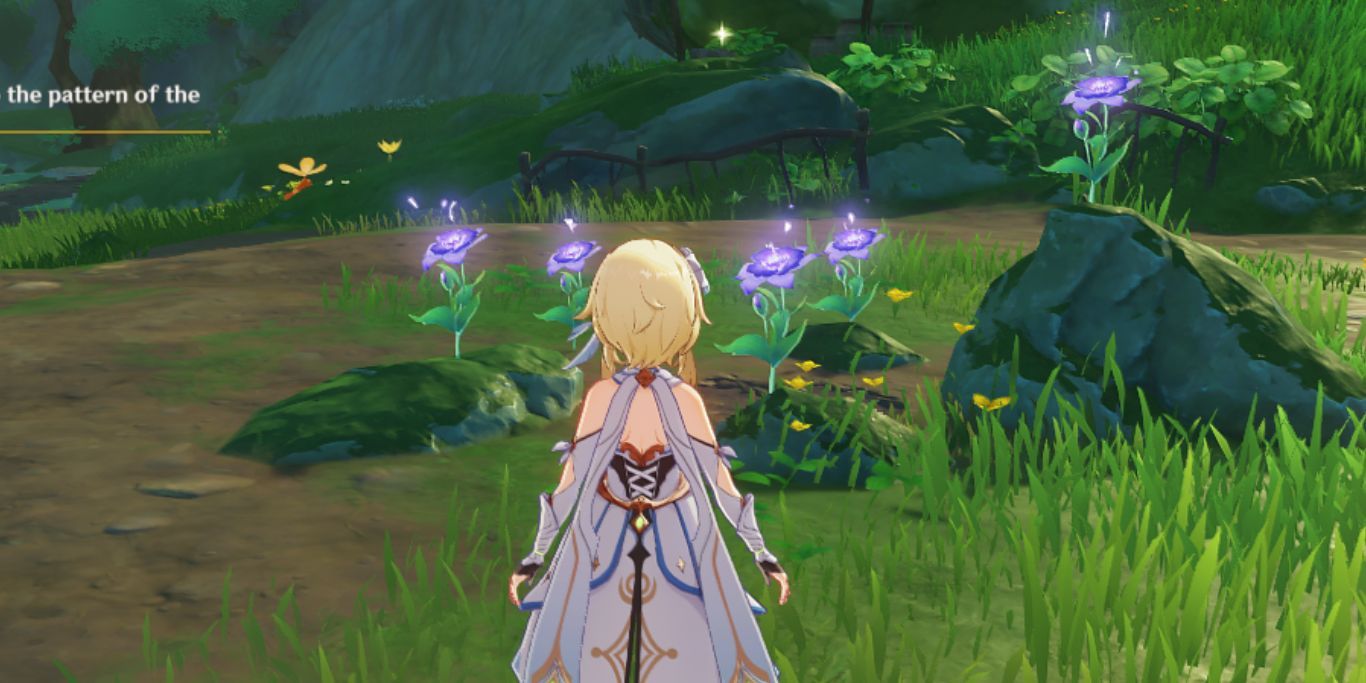 After you light up all the flowers, a yellow beacon will spawn beside you. Use the Lyre you got in the first part of Aranyaka to play and learn the new rhythm. Arama will tell you that the rhythm belongs to Araji, and you'll be using it multiple times to find the first Vasoma Fruit.

Once again, a nearby pond will be marked with a yellow circle, and you can use the green trail to reach the next destination. In the middle, you will see a tree with a small hut below it. Defeat the enemies nearby before you play the same song at this hut and go through it. 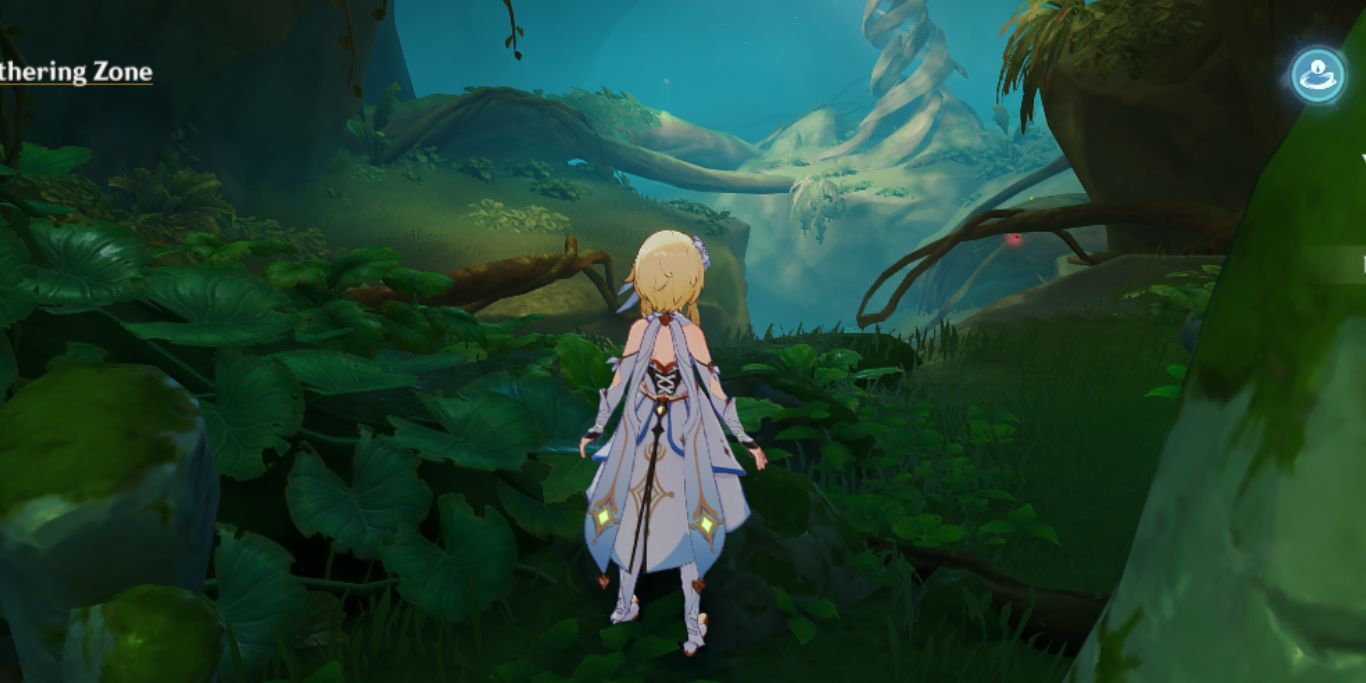 Inside, you will find a WIthering area that requires some special attention. Activate the Dendro fireball pillar on your right, and also the hut that will be just below you. You need to go through this second hut to find the required Dendrograna. 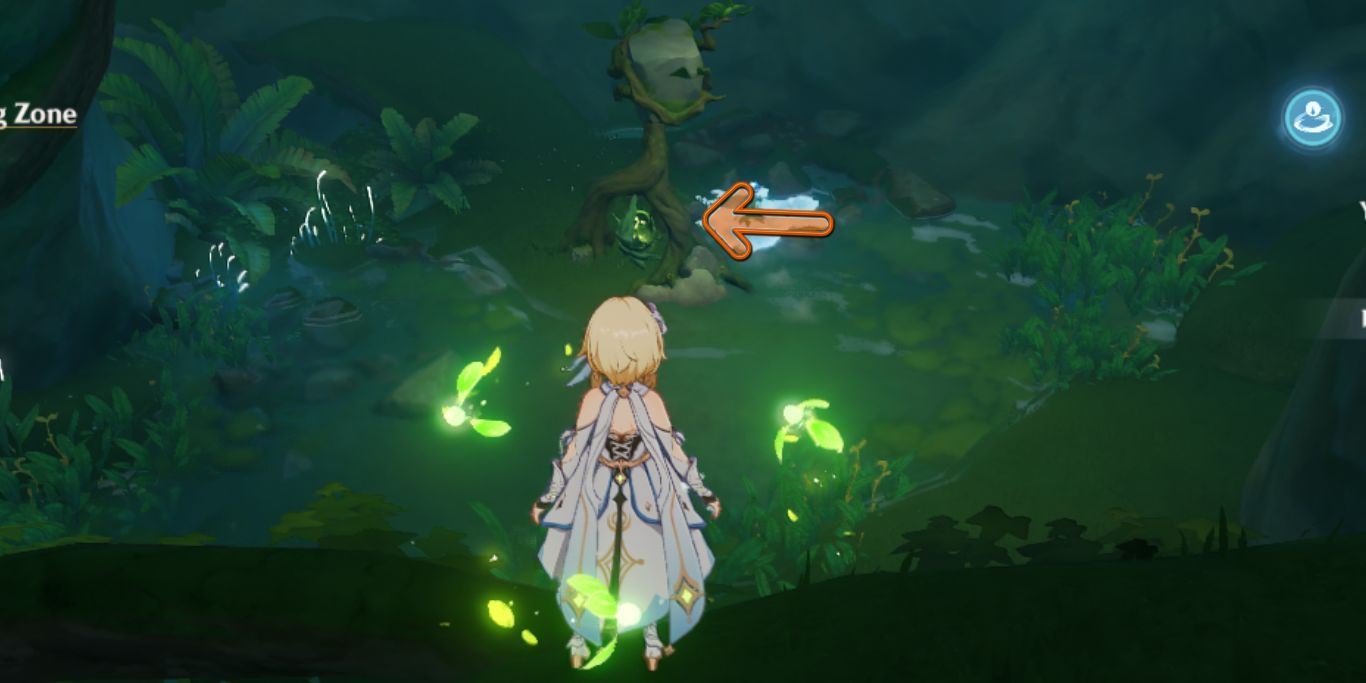 Inside, you will find three Tri-Lakshana Creatures around the water body. You will also have to defeat a ton of Fungi during this entire process. You can apply Dendro to these rocks engulfed by branches, and one of them will have the Dendrograna you need. Interact with it and quickly go back through the hut.

As soon as you head out, you will see the first petal for the Withering right in front of you. Use a charged attack on it, and a Dendrograna will follow up with it, destroying the petal. There are also a couple of red flowers on the tree branches that will attack you if you get close, so it's recommended to get rid of these too.

You will avoid a lot of frustration if you use a Bow character during this entire quest. This is because, if you charge the bow for a second and shoot it, it still counts as a charged attack. Moreover, you can also reach far away petals with this easily. 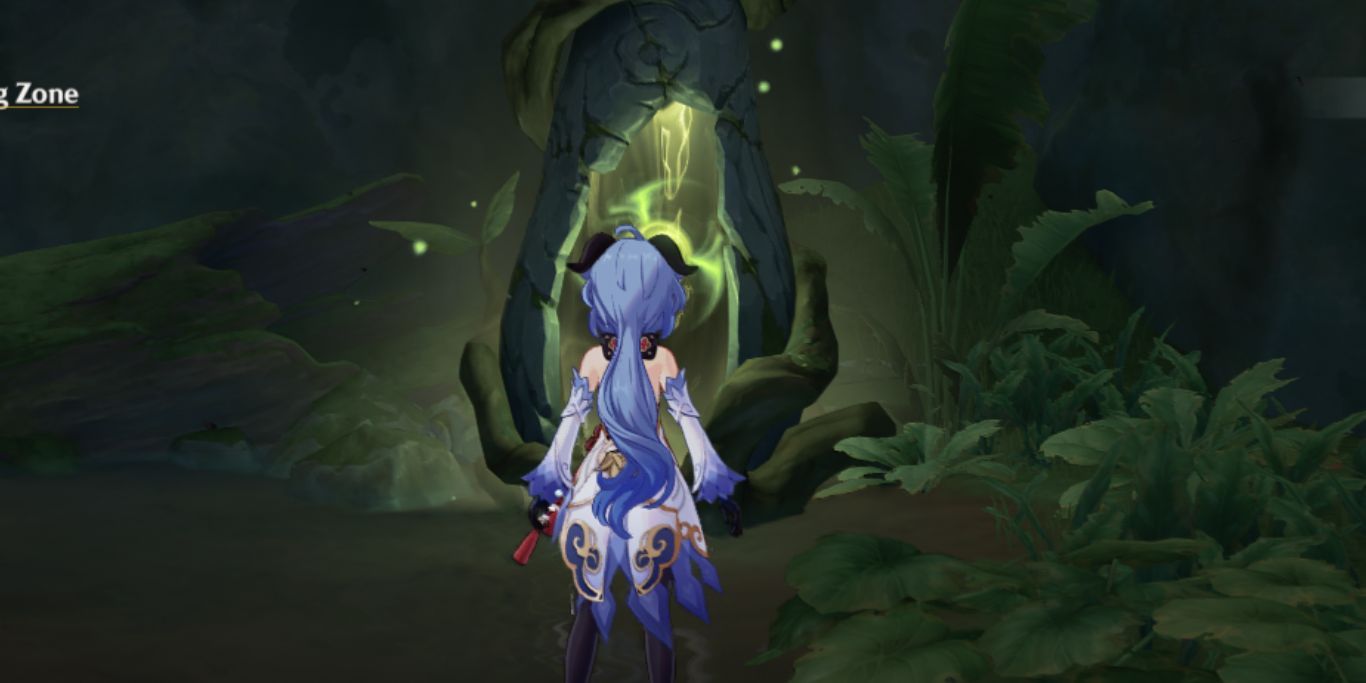 Once everything mentioned above is done, head towards the other end of the ditch with Withering in it where you'll find another hut you can play a tune on. Inside, you will see a Dendrograna chilling in front of an Aranara Hut. Use this one to clear all the petals nearby before heading back up to the main tree.

If you're having trouble finding the petals, since they're pretty small on the tree branches, you can look at the main Withering flower and follow the red trails that come out of it. These lead you directly to the petals.

Once again, enter the hut behind the main tree and grapple to the top of the rock in the other area. This will spawn four small Fungi that you have to defeat to activate the Dendrograna. Head out with this to clear the final petal and spawn Marana's Disciple which is nothing but a few Fungi. 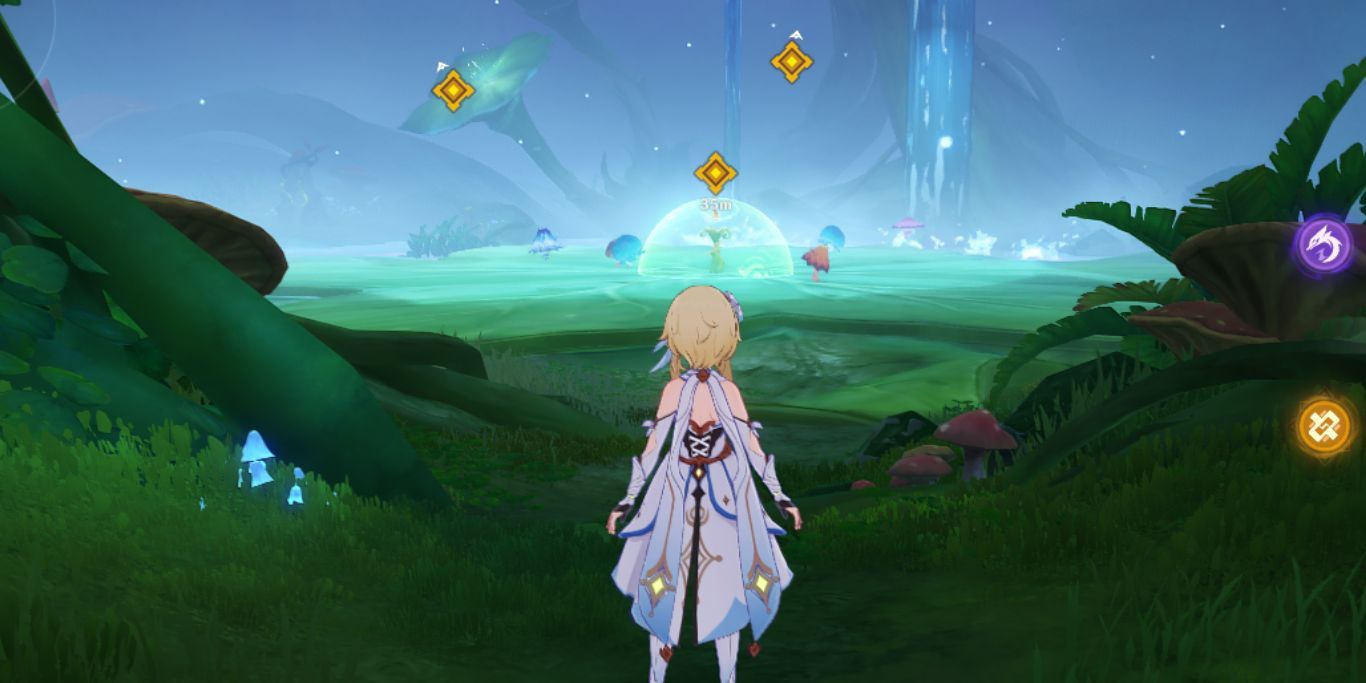 After clearing the main Withering Tumor, you can head back to the main tree and interact with the yellow aura to enter the main domain. Here, you have to unlock three shards for the final gate: 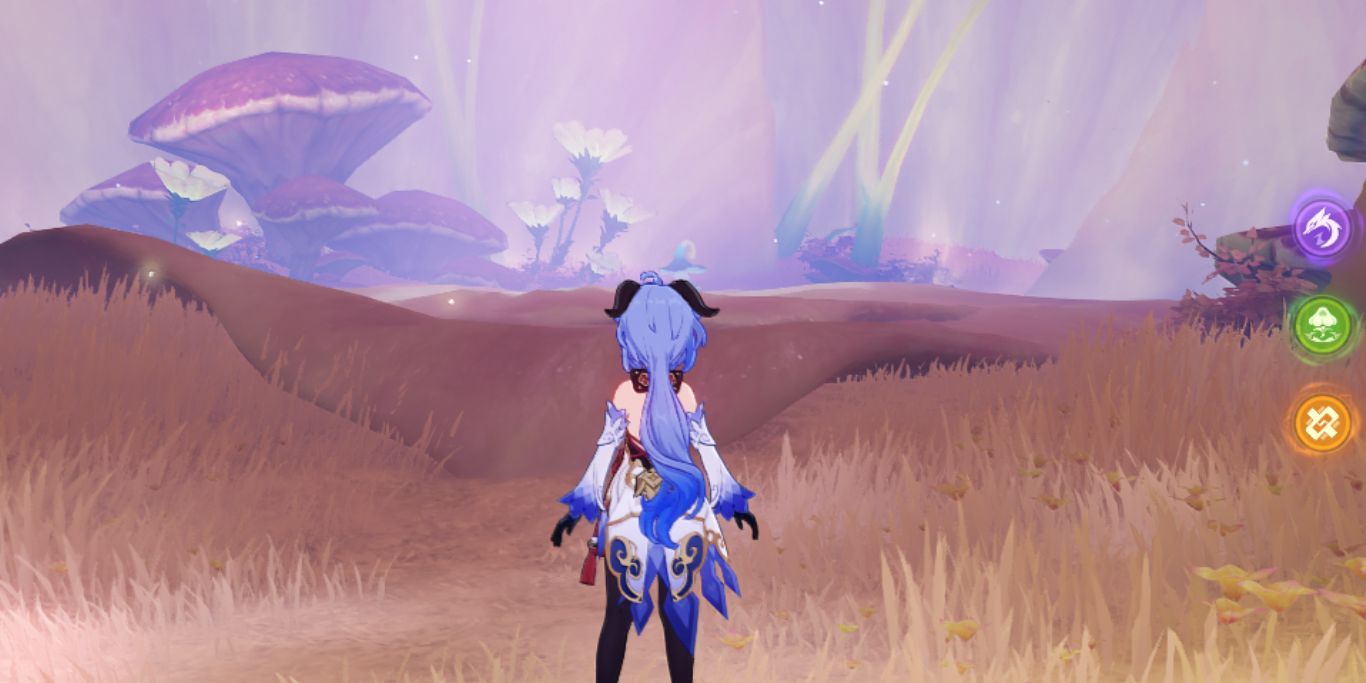 Here, you'll fight the final battle against a lot of Fungi. Defeating them all will spawn a door back to the outside, and it will also spawn the first Vasoma Fruit that you can claim to progress to the next part.