Games Inbox: Is Resident Evil Village the biggest game of the year? 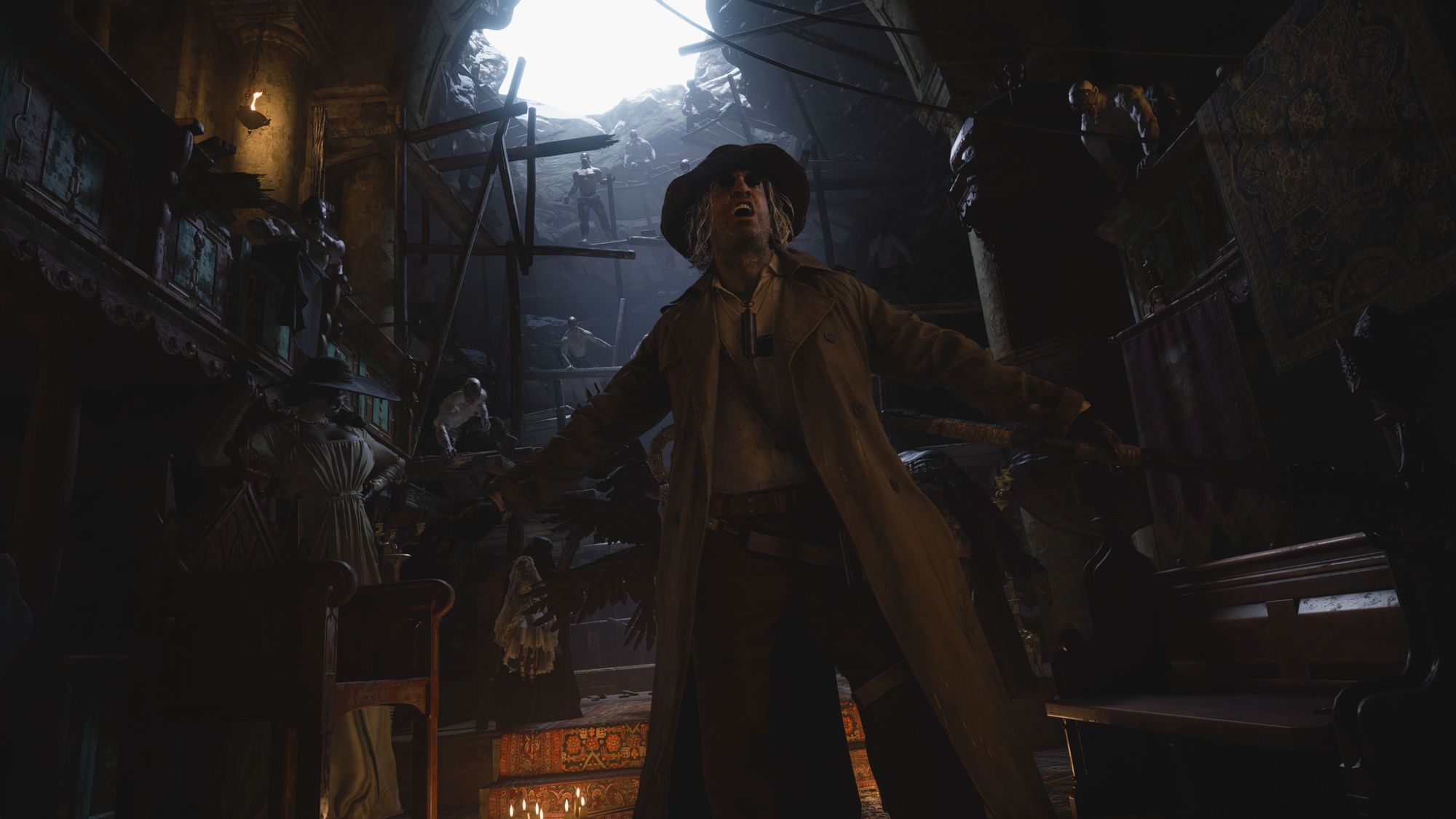 The Friday Inbox congratulates Nintendo for the success of the Switch, as one reader has a different idea for a Division follow-up.

Big new game
Looking forward to playing Resident Evil Village this weekend and the fact that, at last, we have a big name big game out. But could it actually end up being the biggest game of the year? I guess Call Of Duty will be bigger but if you don’t count yearly sequels like it and FIFA I’m struggling to think of what will be bigger? Battlefield 6 maybe? Although I’m pretty sure its reputation is not the best right now, thanks to Battlefield 5, so it might be a bit of a slow burn.

As much as I love indie games and everything there is a special anticipation about playing a big budget new game, something that’s going to have amazing graphics and great production values. They’re becoming rarer and rarer nowadays, because they’re so expensive to make, and that was before the pandemic.

I’m not saying I’d play anything just because it had good graphics but there’s denying there’s an appeal beyond just being impressed by the realism. The level of detail you get nowadays, knowing this is going to be a giant game that hundreds of people have poured their efforts into… I can wait to get my teeth into it.
Cranston

Definition of insanity
I love how a publisher’s response to something not being popular is to immediately make exactly the same thing but just very slightly different. If The Division 2 did much less business than the first doesn’t that just tell you that people are tired of the idea? As someone else said recently all these Ubisoft open world games are basically and I know I’ve had my fill by now.

If you really wanted to continue the series why not make a single-player spin-off or something with a bit more story? Or maybe not given The Division is already a creepy right wing fantasy anyway. I know Tom Clancy is just a brand name, and probably 90% of players have no idea who he is, let alone read any of his books, but he really doesn’t strike me as someone you’d want to be promoting nowadays.

Anyway, to end on a positive note, I’ve been playing R-Type Final 2 lately and it’s great. Obviously low budget but really well designed and very reminiscent of the original games. I was playing it on PlayStation 4 though, not the apparently dodgy PC version.
Antor

Something new
I read the story about Blizzard losing millions of players and then I looked at their upcoming games and I’m sure I’m not the only that saw the problem. Maybe if people are leaving your game in droves it might be because they’re getting a bit long in the tooth? World Of Warcraft is 17 years old now, so old that it’s sort of lapped itself and they’re not releasing the same expansions again because people miss them.

I mean, if you like the game then fine but how about making something other than Warcraft and Diablo? If Overwatch did so well doesn’t that prove that new ideas and new IP can work? At the very least make that Starcraft action game… I forget its name [Starcraft: Ghost – GC]

I’m not that big a fan of any of their games so maybe I’m not the one to say it but I got bored of Overwatch a couple of years ago and have never gone back. It was good while it lasted but I’m not sure I want to be playing any game for such an extended period, when I could be playing something new instead.
Cyclops

Forever doomed
It really is staggering how well the Switch has done, you really have to hand it to Nintendo. Who would’ve thought they’d go for the double team of Wii and DS to the Wii U and 3DS to the Switch and have the last one be the most successful! I can wait till the Switch 2 is a huge flop and the Switch 3 is the best selling console ever.

But seriously, it’s looking like the Switch may end up beating the PlayStation 4 total, an idea you would’ve been mocked for even suggesting a few years ago. I doubt it’ll beat the PlayStation 2 but the fact it’s even in the running is an amazing feeling.

As usual there were naysayers in the comments section pretending that actually none of this counts and Nintendo are still doomed. I mean, Nintendo are 131 years old. At this point it’s going to be them and cockroaches that are left when global warming claims us all. But seriously, well done to them and let’s hope it soon becomes obvious what they’re doing with all that money (I bet it won’t be).
Onibee

Expensive business
So Microsoft has never made a profit with Xbox consoles and rumours are they’re making a loss with Game Pass. I really don’t like the sound of all this. We’ve now got proof that they’re not in this for the money they’re just going to outspend the competition and be the last man standing, through no virtue other than they have tons of money.

I’m not necessarily anti-Xbox, I owned an Xbox 360, but I just don’t like this way of doing ‘business’. It’s like that guy that spends thousands on FIFA Ultimate Team microtransactions, just because he can afford, but is still rubbish at playing the game and gets beaten anyway.

I really wish the war between Microsoft and Sony was fought over who has the best games, not who is the most shady company. Thank god Returnal turned out well and made me think at least Sony are worth putting up with for the games. I’m going to give it another go now and try and forget all this unpleasantness.
Ishi

Behind the curtain
Ohh, some juicy titbits from behind the iron curtain of the video game industry, thanks to Epic’s legal spat with Apple.

So far, we know Microsoft love The Last Of Us Part 2 (I wonder if anyone at Sony played Crackdown 3 and lay around laughing).

Plus, it’s actually not that pricey to put third party games onto free/subscription services thanks to Epic’s reveal of what they paid to give away games.

And that Epic went to Sony and basically offered to, ahem, polish their silverware if Sony allowed cross-play, only for Sony to say… no thanks.

They relented in the end, but their dominance in the industry actually allowed them to bully Epic for revenue share on spend from other services, and there’s a kill switch… they could turn it off tomorrow.

I’m looking forward to seeing more of the big players’ underwear in the coming weeks. I’m desperately hoping there’s a transcript of when Miyamoto met Tim Cook, drank him under the table with saki and preceded to 3-star every level in Super Mario Run with his feet.
DarKerR (gamertag)

Gaming priorities
I could well believe that Ratchet & Clank: Rift Apart has the best graphics but as I think the reader was implying it’s not really something that appeals to me. I played the remake on the PlayStation 4 and got bored of it in a few hours. Also, it wasn’t nearly as funny as it seemed to think it was.

Everyone wants good graphics but I think in reality it’s fairly low down the list of priorities in terms of things that really matter. I’m much more likely to care about Rift Apart if the gameplay looked more fun or it had some decent jokes, than if the fur on the one that’s not a robot (Ratchet?) looks really realistic.
The Colt

Nemesis down
I’ve already sung the praises of the wonderful Returnal but, as I zero in on the finale, a special mention must go to the boss battles. I don’t know which one readers or GC preferred to duel the most, but I’ve got to go with Nemesis. I went through all three biomes and that brutal ascent of the tower was terrifying as I was trying to preserve my integrity consumables. By the time I began the fight I was convinced he’d pulverise me.

However, I had entered some zen like state and despite being bombarded by the most impressive audio and visual onslaught since the unforgettable shark boss in Astro Bot: Rescue Mission I cut him down to the final phase. It was then that all my confidence started to fail me as his vertical blue attack ripped me apart but, eventually, I nailed it and delivered the final blow. I then became aware that I was completely out of breath and a state of heightened euphoria so had to pause the game and walk around for a while to regain composure.

They’re not quite as hard as some of FromSoft’s gruesome creations (Defiled Chalice anyone?) but in terms of spectacle they’re wonderful. It’s going to have to be a seriously impressive game to topple this from my GOTY.
Andee

GC: It’s definitely ours at the moment.

Inbox also-rans
I really hope this PlayStation 5 redesign is a slim, even though that’s not the rumour. My mate has one and it is just so big, and really ugly. I don’t know whether I’ve got room under my TV and I don’t know if I want it either.
Faulks

I thought this video was quite funny about someone having first person shooter disease from playing video games.
Andrew J.

This week’s Hot Topic
The subject for this weekend’s Inbox was suggested by reader Tolly, who asks what’s the most obscure game you’ve ever played?

What game have you played that nobody else ever seems to have heard of? Did you like the game and what was its critical consensus, if any? Was the game unusual in any way or was it simply something you’d never heard of before?

How did you find out about it and did the experience encourage you to search for other less well-known games? Do you often try to seek out more obscure games and how do you make your choice of which to play?