For anyone in their 30s and 40s, discussing any topic around Final Fantasy VII comes with obligatory baggage. This applies even if you weren’t into games in 1997 and had no idea what Final Fantasy was — that’s weight that has to be carried into the topic.

I was fresh of high school when Final Fantasy VII debuted. I played it. I liked it. I didn’t finish it. I didn’t feel like I had to in order to “get it,” because the rampant fandom of the time spoiled most of the game for me.

But since then I always felt like an outside, casual viewer of the whole Final Fantasy phenomenon. Final Fantasy is cool, but I’m not invested in it — definitely not enough to commit to anything after Final Fantasy VII.

For some folks, this will make me criminally unqualified to go check out the Final Fantasy VII Remake. But I am not here to represent the die-hard fanatics. There will be plenty of think-pieces, podcasts, and streams dedicated to those perspectives from other folks that were at the hands-on.

I walked into the play session with a self-check in my head: Will this vision of the game make me want to revisit Final Fantasy VII, let alone engage in it further in 2020? 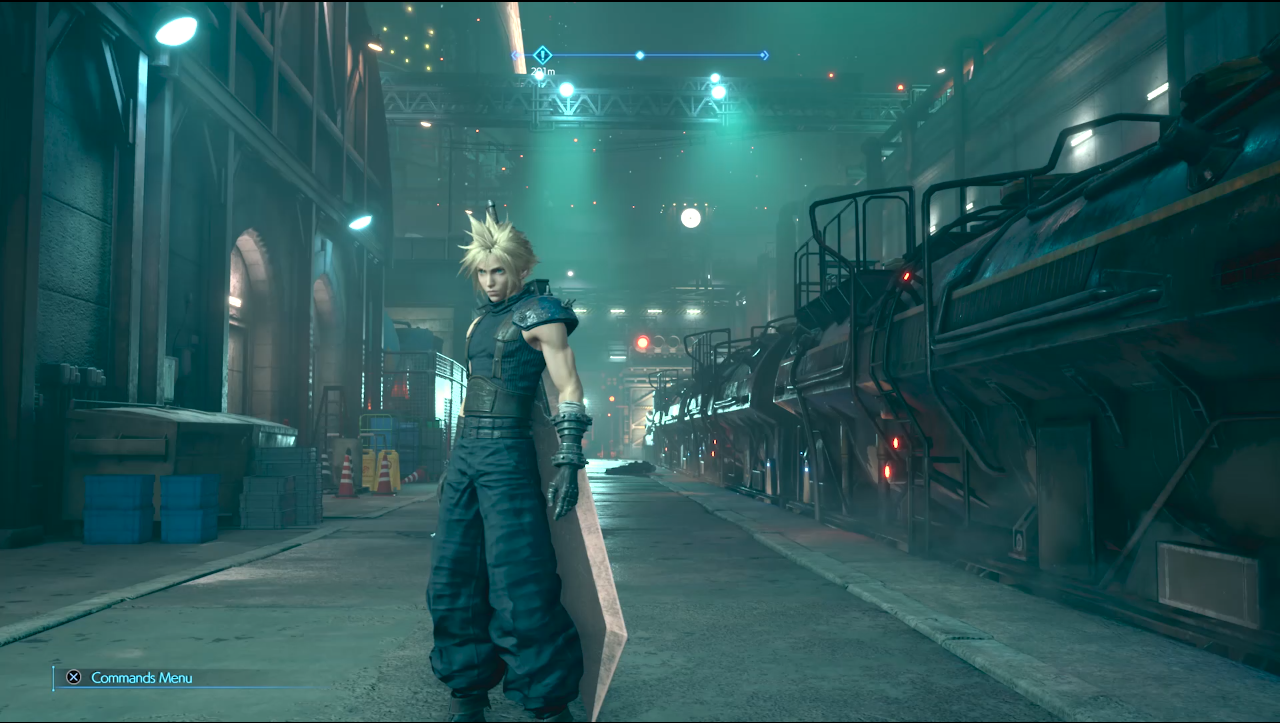 But what’s the intent behind some of the visual decisions? Does it have to just be updated art assets for the sake of progress in technology?

With Resident Evil 3, the intent is to frighten. There’s more there, and I’m not trying to suggest its goals are shallow, but let’s agree that fear is the base Resident Evil 3’s visual context is working up from.

Final Fantasy VII’s visual intent is starting from somewhere more complex than just to scare, and this element hit me a little weird while playing the Final Fantasy VII Remake. I think I know why. 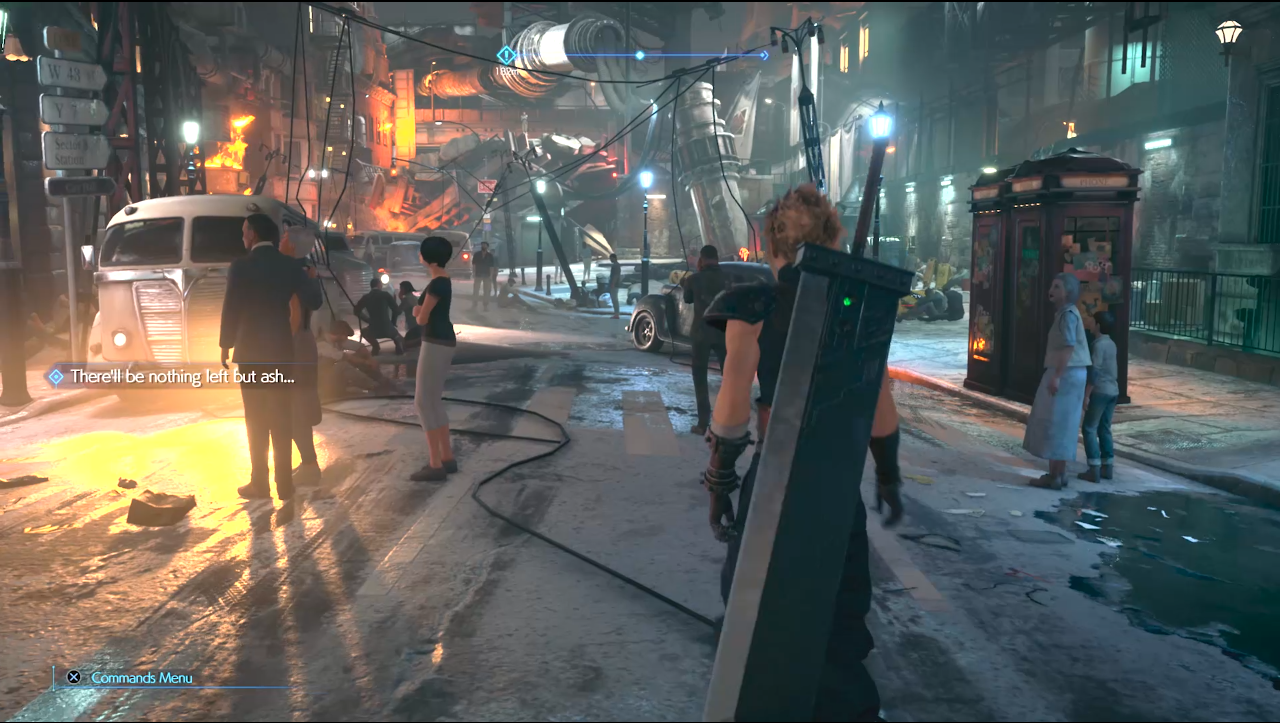 You see, in the original Final Fantasy VII, the art direction and tone was that of a charming adventure in a cold industrial surrounding, with cute PlayStation puppets enacting scenes hinting at the horrors of their dystopian existence. It’s a world being devoured by corporate fascism and ecological disaster.

In 1997, the issues of corporate exploitation and environmental ruin were very much alive and well, but their impact on the real world still felt largely reversible. Yes, corporations can be irresponsibly reckless and heartless. Yep! We’re punching a giant hole in the ozone layer and ramping up extinction on the planet. But we were naive in thinking the underlying warnings in media like Final Fantasy VII were unrealistic extremes. These issues would surely derail long before things felt that desperate, right?

But as I played the Remake, I felt an appropriate — and admittedly possibly unintentional and purely in my head — flip of how the message is being applied. And perhaps even what that message even is anymore. In the year 2020, the corporate and ecological crisis in Final Fantasy VII isn’t some far off warning. It’s what we’re in now. And the less stylized, more realistic-looking characters feel like the evolution of that. 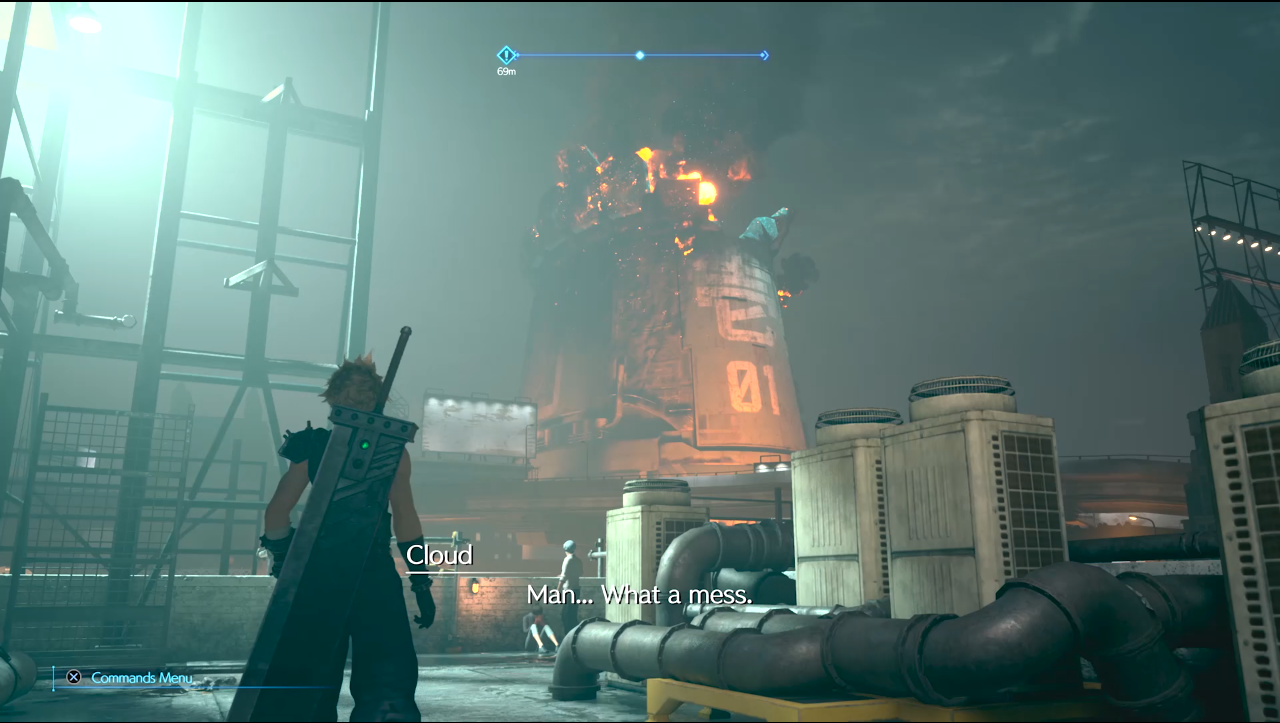 Why visually sugarcoat the frightening message with cute representations of characters, when it’s no longer a warning? Why do that when we’re living that message now?

The realistically rendered Barrett being overbearing in expressing his heartfelt conviction for saving the planet, his friends rolling their eyes yet lovingly supporting him, the bit of good-hearted ribbing between comrades in a stressful situation, or a party member’s attempt to show reassurance to others while the world around them is slowly crushing them. It felt like humanity and empathy are the new underlying message that the “realistically” rendered characters can convey clearly. Things in the world might be going to shit, but you’re not alone in being afraid — we all are afraid.

Granted, this may be really reaching. Especially based off a couple hours of play, and the final release may have a totally different intention. But it definitely got the gears in my brain turning. 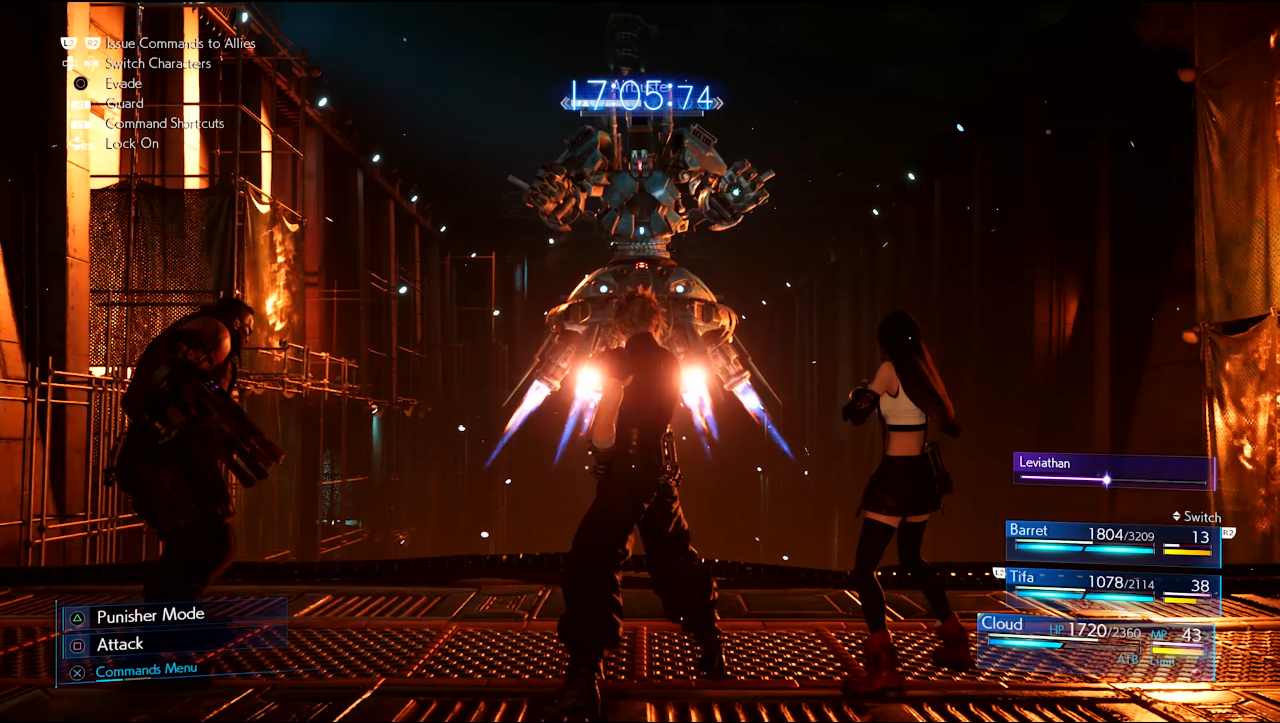 How Final Fantasy VII feels as an action game

Battles in Final Fantasy VII Remake are in real time. You move the game’s protagonist, Cloud, around with the left stick while adjusting the camera with the right. Every character has a normal attack (Square) and a special ability (Triangle). For Cloud, Triangle has him switch to a slower, more defensive stance, providing for more powerful attacks and a special counter against blocked melee strikes.

The D-pad Left and Right inputs allowed me to switch between characters in my party in real time, while X would slow the action down to a crawl and allow access to the Commands menu. From there, I could access abilities, spells, and equipment. 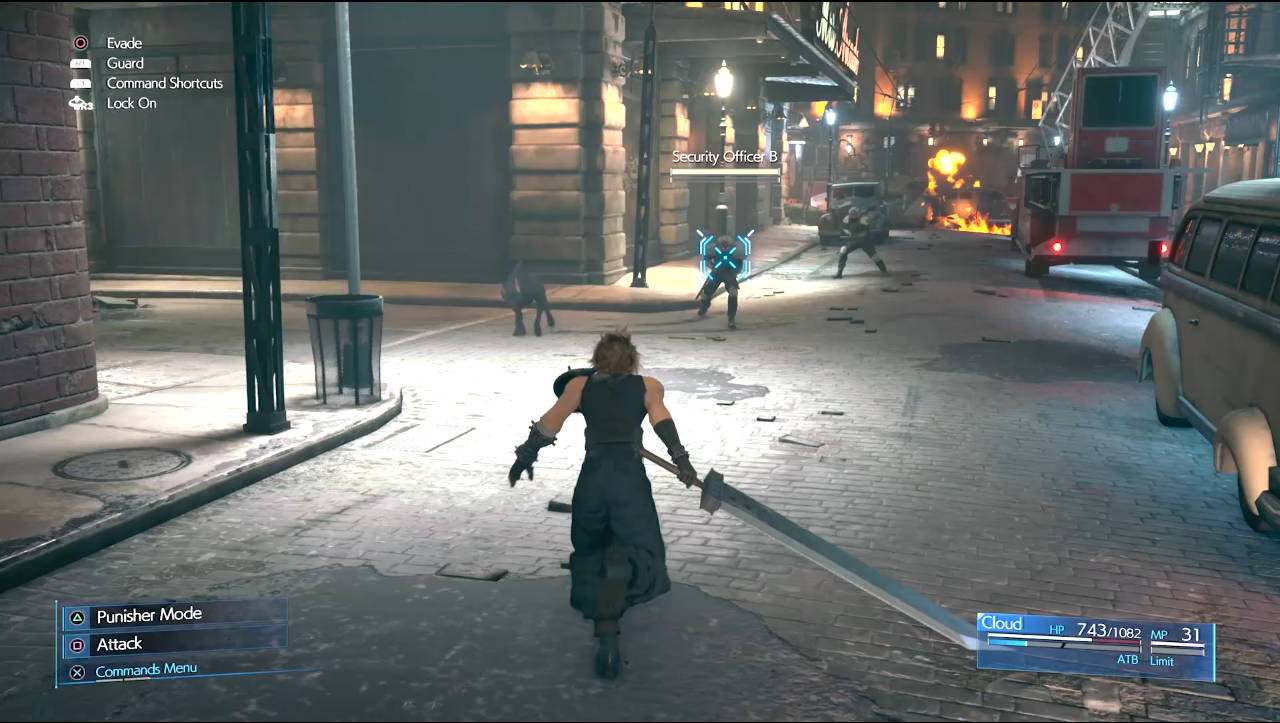 The battle system eventually creates this fascinating emphasis on constantly gear-shifting the action from high to low, then back to high again. So I’ll execute a combo with Cloud in real time, shift to another character with the left arrow, hit X to slow everything down, and access a spell. And then, the action goes back to real time, you will switch to a third character, hit X to shift to the menu system, and have the new character throw a potion at Cloud. And then you switch back to real time, hit left arrow to go back to Cloud, switch Cloud to mode switch to block and parry, execute a combo, then switch to another character whose Limit Break is ready.

At first it felt daunting, but like riding a bike, it becomes easier the more you do it. What it doesn’t do, however, is make battles boring.

You have to understand that my prejudice towards Japanese RPGs is based on an era of repetitive menu choices. Battles were just grinding through the same selections, to the point where you don’t have to engage in the game fully. You can be reading a book, doing laundry, watching something on another TV, and just occasionally look up … make your attack decisions … then tune out until it’s your turn again. That won’t happen with Final Fantasy VII Remake. 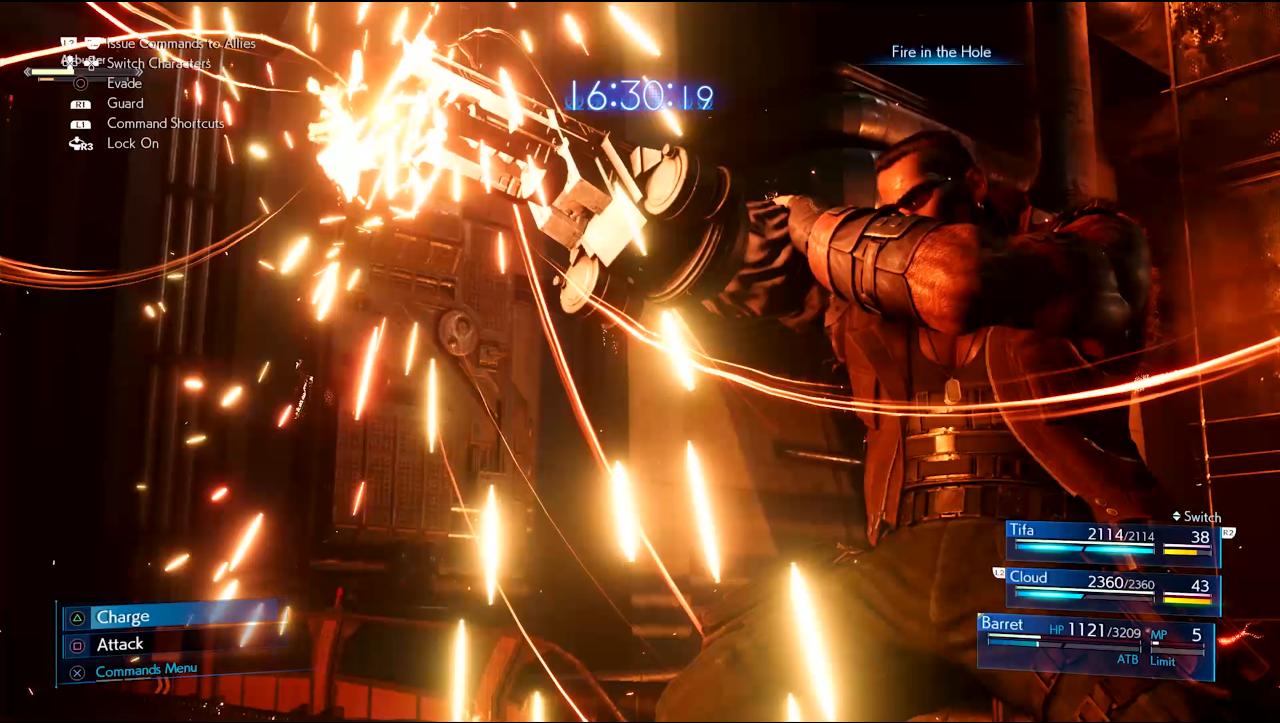 Above: This is gonna be big

Final Fantasy VII also breaks from the Japanese RPG trope of semi-random encounters. Battle events in the demo took on a very action game structure, with waves of enemies hanging out in certain parts of the level, waiting for your party to eventually approach. I’m not sure how this will effect grinding, or if that’s even necessary anymore.

Maybe everything I am describing is old hat for modern Final Fantasy titles, but I find it intriguing that this is the direction things have gone (so much so that I want to backtrack and investigate the older titles). And if you’re only returning to Final Fantasy for this remake, as I am, be prepared to be much more engaged than before.

I’m coming back to the Final Fantasy series

I walked into this play session with reservations. Final Fantasy didn’t create much of a blip on my radar after VII, and the only Japanese-RPGs that really dug into me were random Shin Megami Tensei related titles. I didn’t even have plans to check out the Final Fantasy VII Remake on release.

But now Final Fantasy VII Remake is very much on my radar. The possible intent of the art direction and narrative message, coupled with the action design decisions have kept the game intruding my thoughts for the last couple of days.

I feel like if I truly was the wrong person to be in that play session, then who was the right person? Someone already sold on Final Fantasy VII? Someone that was already invested? But there are a lot of people like me that just haven’t interacted with the Final Fantasy series in any significant way since the original Final Fantasy VII. If that sounds like you, the Final Fantasy VII Remake may be a good spot to jump back into the series.