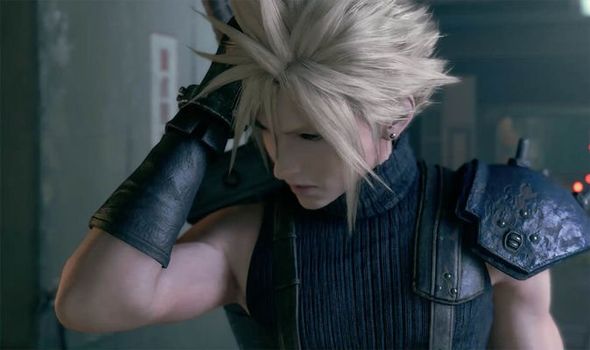 UPDATE: The Final Fantasy 7 Remake is now playable on the PS4, as Square Enix gives the demo a surprise release.

You can play the Final Fantasy 7 Remake for yourself right now by visiting the PSN Store and downloading the free demo.

Ahead of today’s FF7 Remake demo release Express.co.uk got to spend over three hours playing the JRPG revival.

ORIGINAL: Playing the Final Fantasy 7 Remake is a surreal experience after so many years of waiting for the PSOne classic to return.

This was the game that for years seemed like it was never going to be, a project fans had long demanded in vain.

Murmurs of a Final Fantasy 7 Remake began in the early noughties, with this only heightened in 2005 by the PS3 FF7 tech demo shown at E3 and the Advent Children movie.

Both gave a glimpse of what Final Fantasy 7 could look like when remade with modern tech.

However it wasn’t until a decade later that FF7R was actually announced, with the PS4 launch date getting pencilled in a further five years down the line.

After all this time it’s surreal to finally get to play this new and updated version of the influential PS1 classic that’s dear to so many gamers’ hearts.

But it’s also surreal how, despite the huge weight of expectation on Square Enix’s shoulders, they have absolutely nailed every aspect of the Remake.

There’s a lot to dissect so let’s first start with one of the most immediate things players will notice about the Remake – the visuals.

The FF7 Remake is powered by the Unreal Engine 4, and complemented by Square Enix’s distinct art direction it’s one of this gen’s best looking games.

This is all supported by a dynamic music system which co-director Naoki Hamaguchi, who was at the preview event with Yoshinori Kitase, detailed. 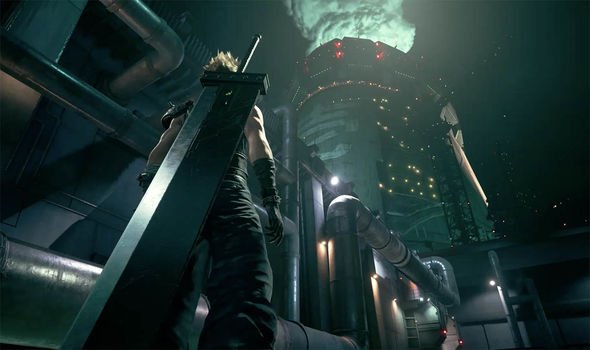 Hamaguchi-san said the Final Fantasy 7 Remake deploys a dynamic music system which plays different arrangements of the same melody based on a situation.

So a sedate version of a tune could be playing while you’re exploring Midgar which seamlessly shifts to a more uptempo version in fights.

Once you’re out of a battle the music will then morph into a ballad-like version of the same arrangement.

David Lynch once famously said 50 per cent of films are visual and 50 per cent are sound, and the same importance on music could be said of FF7.

Nobuo Uematsu’s Final Fantasy 7 score is one of the game’s defining features and this music system is a nice touch that highlights its significance.

One of the biggest changes from the original that players will have to get to grips with from the off is a brand new action-orientated combat system.

Hamaguchi-san spoke about the dev team’s desire to create a completely new and innovative battle system that had never been seen before.

While that may sound like the typical marketing spiel you’ll hear ahead of the release of a new game, Square Enix has created something unique in FF7.

The fusion of Kingdom Hearts-style action-packed battles with tactical ones seen in a traditional Final Fantasy game results in something new and fresh.

There are so many moving parts to a fight in the Final Fantasy 7 Remake that means it’s immensely satisfying once you get to grips with the combat system.

Here’s how it works – during battles in the FF7 Remake you take control of one lead character in a maximum party of three. 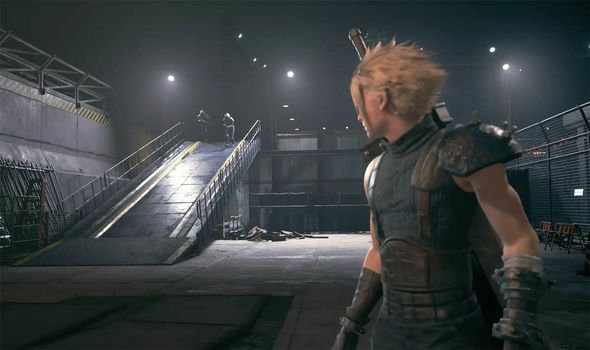 At any time you can switch between who you are controlling with the D-Pad, with the actions of other party members carried out automatically by default.

The character you’re controlling will oftentimes be the one you’re using to deal out the most amount of damage, unless you need to switch to a healer.

When attacking the majority of your blows will be performed by creating combos with multiple presses of the Square button.

Hitting the X button will allow you to use an item, cast a spell or deploy a character’s special ability – but all use up a slice of the ATB gauge.

Each character has two segments of an ATB meter which fills up by attacking and as time goes on.

Characters also have special abilities that can be deployed with the Triangle button – such as Cloud’s Punisher stance or Barret’s Overcharge attack. 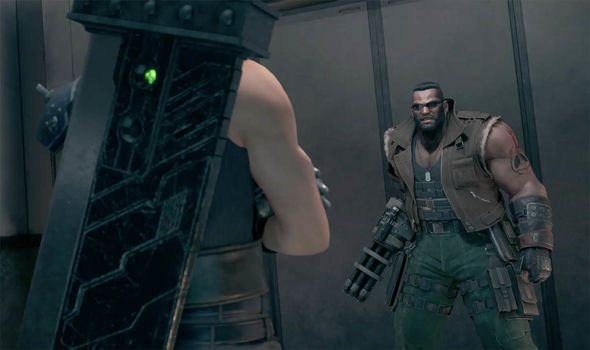 The former allows the ex-Shinra SOLDIER to dish out heavy physical attacks, but at the cost of moving slowly, while Overcharge is a huge arm cannon shot.

The trade-off to Barret’s attack is that it takes time to charge up, but this can be sped up by pressing the Triangle button over and over again.

These multitude of attacks can be the key to unlocking an enemies’ weakness or staggering them so they are left open to an onslaught.

But because the fights move at such a fast pace, it can be difficult to think on your feet to figure out what option is best. 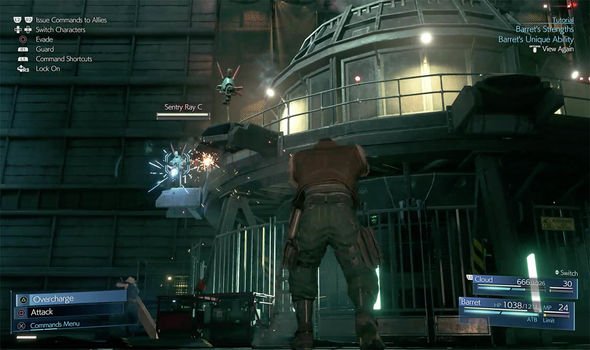 This is where the Tactical mode comes into play, which can give you a moment’s respite.

By hitting the L2 or R2 trigger button it allows you to issue orders – such as cast spell or use item – to other members of your party.

When you do this it slows down time, allowing you to tactically chose how to carry out your offensive or how to recover from a precarious situation.

It’s a refined battle system which boasts plenty of depth, and that’s even before taking into account the Limit Break and Summon mechanics. 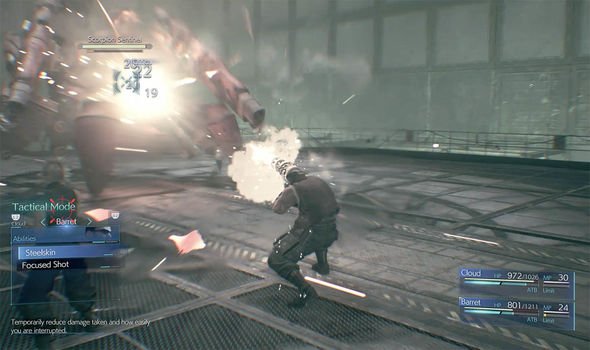 The latter are truly breathtaking to behold, with Summons once called upon fighting alongside your party for a set period of time before vanishing.

While Summons are in play members of your party can issue attacks that Shiva, Ifrit et al carry out – but these all expend chunks of your ATB gauge.

In our three hours spent with the Final Fantasy 7 Remake we fought plenty of regular enemies and three bosses – Guard Scorpion, Air Buster and Abzu.

What was interesting about the boss battles was the huge variety in how these fights played out.

Guard Scorpion can wipe out massive chunks of health unless you manage to take cover and at one stage is only vulnerable to attacks in its weak point. 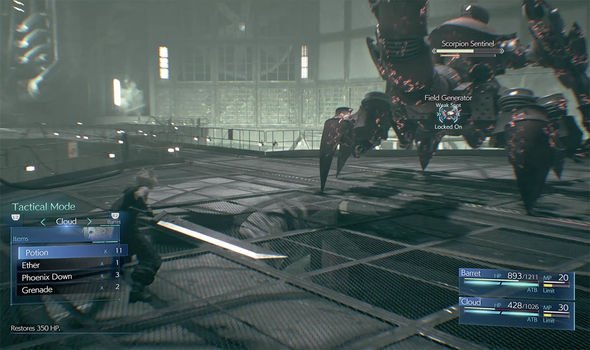 Air Buster doesn’t have the defensive strength of Guard Scorpion but is more offensive and the battle is played out in close, confined quarters.

And the Abzu fight takes place on the biggest stage of all three battles, but the creature boasts attacks that deal damage across huge swathes of a map.

Each fight required vastly different tactics, and just because one fight was dealt with comfortably doesn’t mean the other will be a walk in the park.

The Final Fantasy 7 Remake is meant to offer the same amount of gameplay as a typical numbered entry in the series. 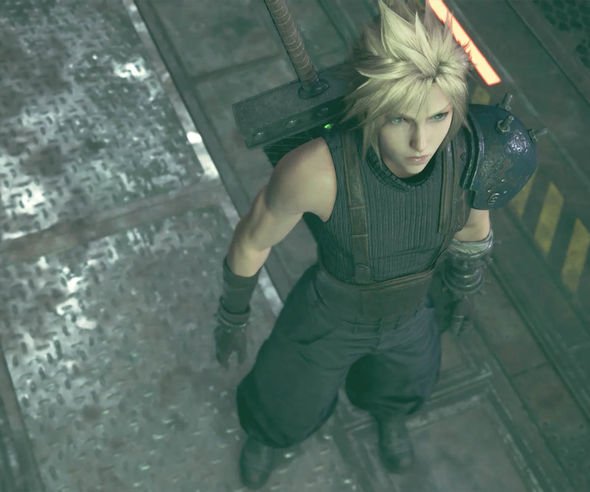 But what is clearly apparent is that Square Enix has put an endless supply of love and care into building every single facet of FF7R.

It’s a game designed by people who have a clear understanding about what made the original so special for countless gamers around the world.

And they have created something which not only pays tribute to that influential experience but brings it up-to-date for modern times.

What we’ve played so far is a pitch perfect retelling of that PS1 classic which has somehow managed to exceed our lofty expectations.

All that’s left now is for April 10 to roll along, as the release date for the Final Fantasy 7 Remake can’t come soon enough.

As for our early pre-review verdict, Final Fantasy 7 Remake is shaping up to be a 5-star masterpiece.