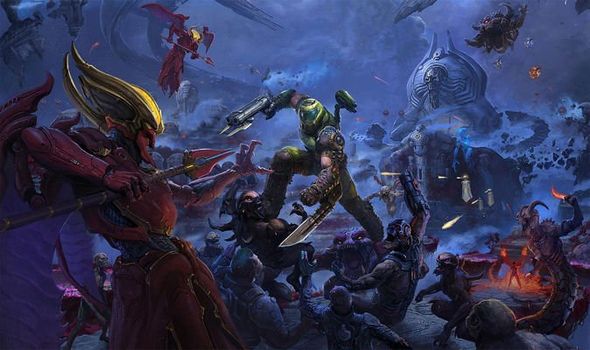 The first major release of Doom Eternal DLC is scheduled for this week, and it will mean new monster to slay and levels to explore for fans.

While the new Ancient Gods expansion is not currently available to purchase by itself from the PlayStation or Microsoft Stores, the Year One Pass for the game is still available as part of the Digital Deluxe version of the game.

The Year One Pass includes access to two campaign expansions – The Ancient Gods – Part One and Part Two, with part one launching later this week.

And for those preparing to take on a new wave of the legions of Hell, we know when things will be kicking off across PS4, Xbox One and PC.

WHAT TIME IS DOOM ETERNAL: THE ANCIENT GODS COMING OUT?

According to Bethesda, the Doom Eternal Ancient Gods DLC release date has been set for Tuesday, October 20, 2020.

The new expansion is part of the Year One Pass, but will also be available to download and buy as a standalone product.

From what has been shared today by Bethesda, the Doom Eternal Ancient Gods DLC release time has been set for 1pm BST on Tuesday, October 20, 2020.

“And don’t be afraid! Once your soul has been consumed, your fear will cease to exist.”

Unless the Doom Eternal DLC has a special launch time planned in North America, this should mean the Ancient Gods will be available to download at around 5am PDT.

The official description for the new Doom Eternal DLC can be found below: “Slaying the Khan Maykr left an imbalance of power that threatens all of creation.

“The legions of Hell have razed the heavens, threatening to expand their control across dimensions. With the aid of an old ally, battle your way back to Urdak and decide the fate of the cosmos.

“Experience a new mission in your eternal fight against evil. Unleash your vengeance and face your greatest test as you march back to the Maykr’s realm. Defeat powerful new threats, restore order to the heavens and unearth the corruption that has thrown the universe into chaos.

“This DLC expansion is part of the Year One Pass, included in the DOOM Eternal Deluxe Edition and available for purchase digitally.”

It’s unclear at this point if Doom Eternal: The Ancient Gods will be available as part of the Xbox Game Pass in the future, but no mention has been made regarding its release on the subscription service on day one.

The latest from Microsoft on the situation reads: “The story doesn’t end when Doom Eternal’s credit roll. Continue seeking your vengeance in Doom Eternal: The Ancient Gods – Part One, launching on October 20 on the Xbox Store.

“The legions of Hell have razed the heavens, threatening to expand across dimensions. Battle your way to the heart of the threat and decide the fate of the cosmos.”