DNF Duel: How To Mod Skins

DNF Duel has some of the best-looking, well-animated characters in the genre, making each encounter look and feel spectacular as flashes of color pop through the use of Skills, and the impact of attacks highlight the sheer power behind everyone's strikes. These little details and touches of flare make each character unique and captivating in their own ways.

However, while every character is expertly designed, that doesn't stop people from modding them into iconic characters from anime, other fighting games, and much more. While this feature is only limited to the PC version of DNF Duel, it's still an absolute blast to mess around with and see the bizarre things the community comes up with for skin ideas for specific characters.

While Skin Modding has been unpunished in Arc System Works' past titles (Guilty Gear Strive, Granblue Fantasy Versus, etc.), that doesn't mean that things cannot change in the future. As of now, Skin Mods are thriving in DNF Duel with tons of support from creators, so we suspect it will remain the same as it always has. However, with that said, we do not condone any Mods that alter gameplay aspects or give you an advantage in matches! 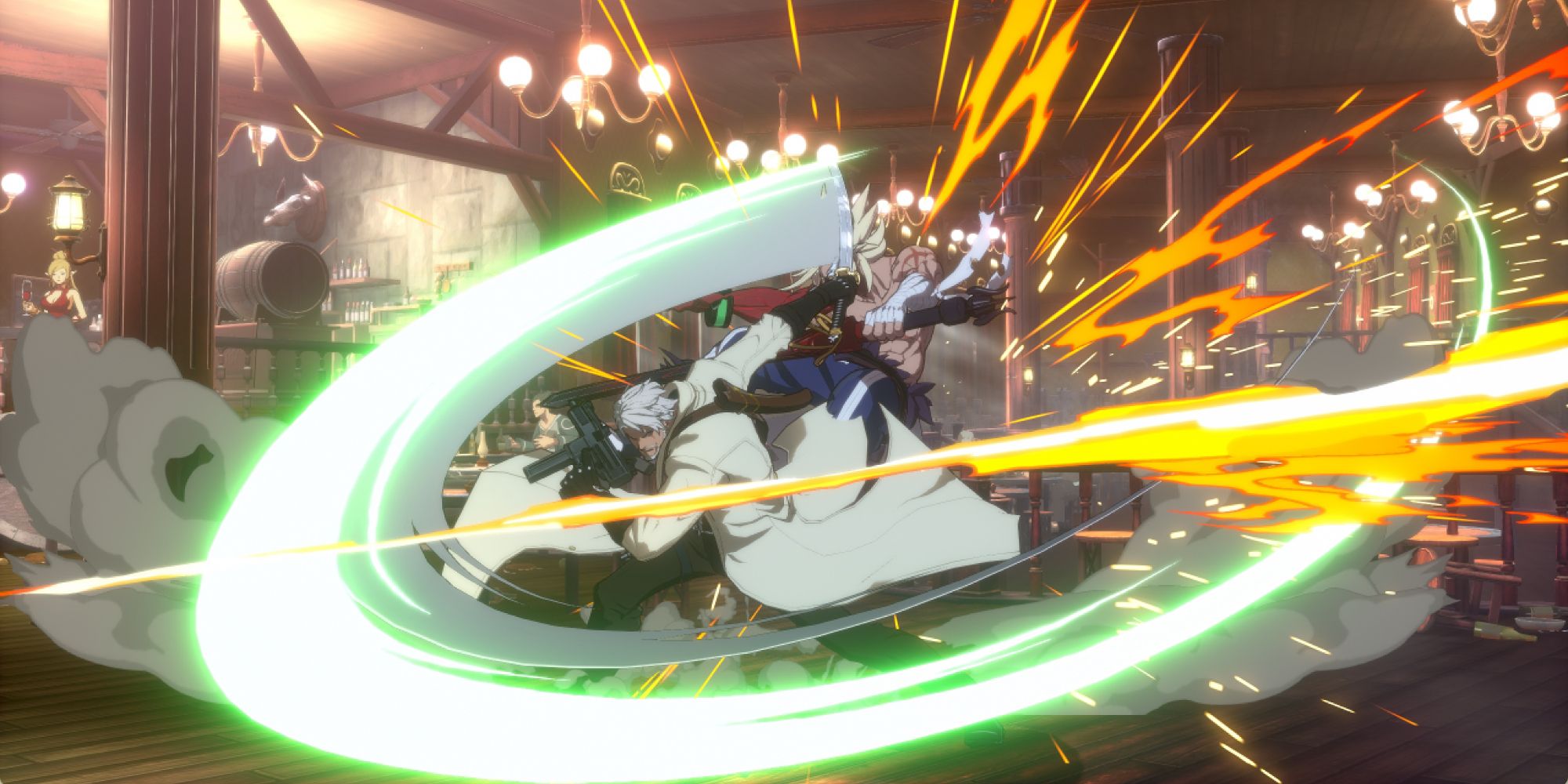 Before we dive into how to install Skin Mods in DNF Duel, we'd like to highlight a few essential pieces of information that will helpfully answer some questions you may have. First, the site we will be using to demonstrate how to download and install mods is Gamebanana, one of the most trusted modding sites for all kinds of games, especially fighting games. While there are undoubtedly other sites that provide mods for DNF Duel, Gamebanana has a proven track record of being a safe resource for mods and has an active community that requests and makes mods for popular titles.

Next, this method only refers to the PC/Steam version of DNF Duel and cannot be done through PlayStation 4 or 5 systems. Though the only limitation, it is a rather big one, as not everyone will be able to access or play this version of the game. Nonetheless, if you own DNF Duel on Steam, you can find out how to download and install Skin Mods in the sections below!

How To Mod Skins In DNF Duel 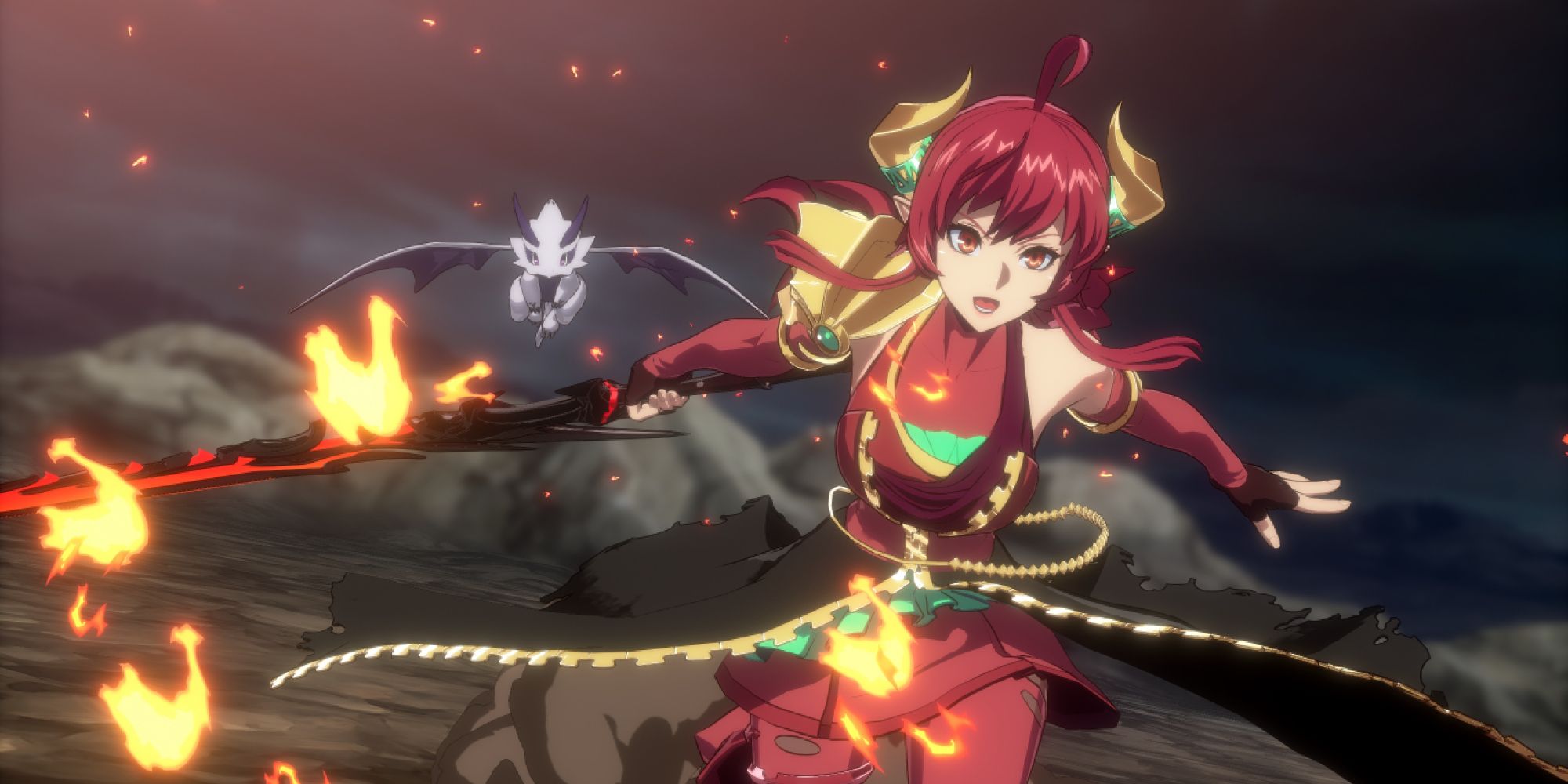 With the preamble out of the way, it's time to learn how to install mods in DNF Duel. While there are two methods of installing mods for the game, we will be walking you through how to use Unverum to make things as straightforward as possible, as the manual way can be a bit tricky at times and mess up lots of stuff if you aren't careful.

This will also allow you to mod many other games if you own them, as Unverum has support for Dragon Ball FighterZ, Guilty Gear Strive, Granblue Fantasy Versus, and much more. So, once you have DNF Duel working, you can follow the same steps to get other titles up and running just as quickly. But that's for later. But, for now, let's dive into the guide!

The first step will be installing the latest version of the Unverum Mod Manager, which can be found on Gamebana here. As of writing, the most up-to-date version is 2.3.0, which we will link here. Once downloaded, you will have to open and extract the Unverum Folder with an extraction tool such as WinRAR or 7-Zip and run the Unverum.exe application to begin the setup process. If you don't have .NET 6.0 Desktop Runtime installed on your PC, you will be prompted to download it during the setup process. After this is done, we can move forward to setting DNF Duel up from within the Mod Manager. 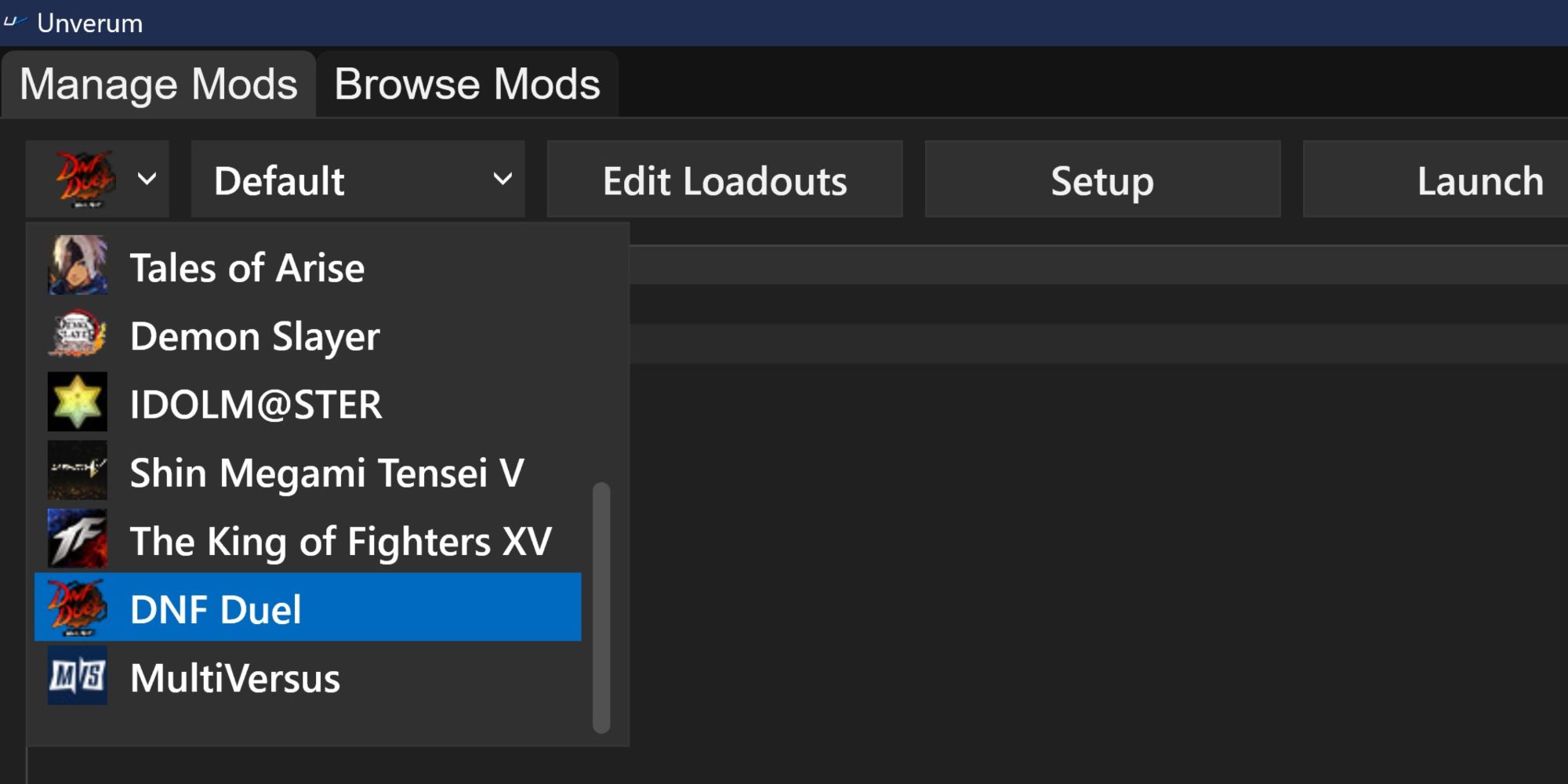 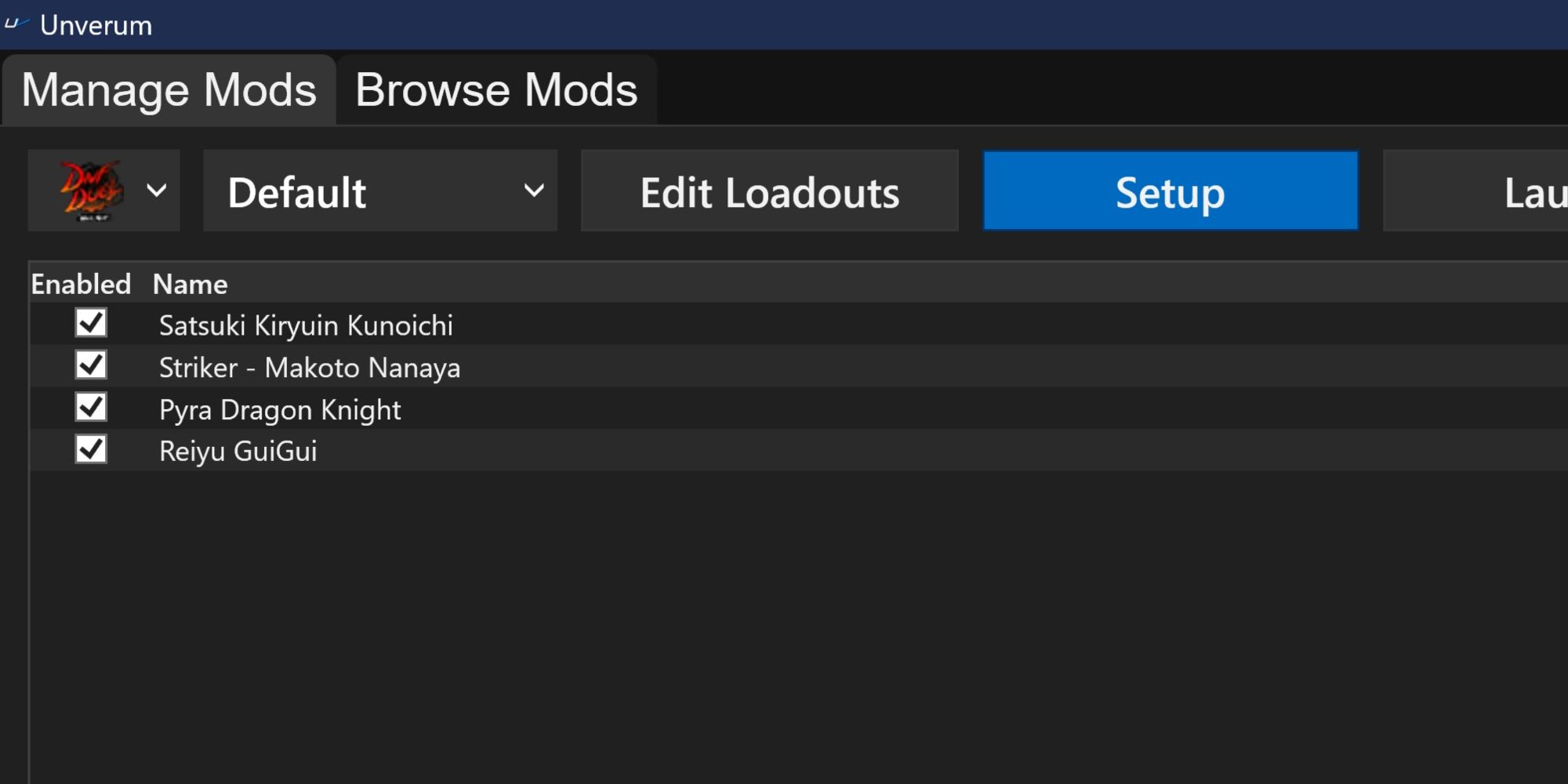 With Unverum up and running, it's time to mod some Skins in DNF Duel. The first step is to navigate to the top-left portion of the screen and click the drop-down box that displays Dragon Ball FighterZ by default. From there, scroll down the list until you find DNF Duel and select it. Next, you will want to decide how you want your game to launch by choosing either 'Executable' or 'Steam Shortcut.' This step doesn't matter all that much and is just personal preference.

After selecting how you want your game to launch, you will complete the setup process by clicking the 'Setup' option at the top of the screen, which will automatically find the game's Executable or Steam Shortcut. This will also let Unverum create a Mod Folder for DNF Duel, allowing you to install mods, which we will go over how to do next! 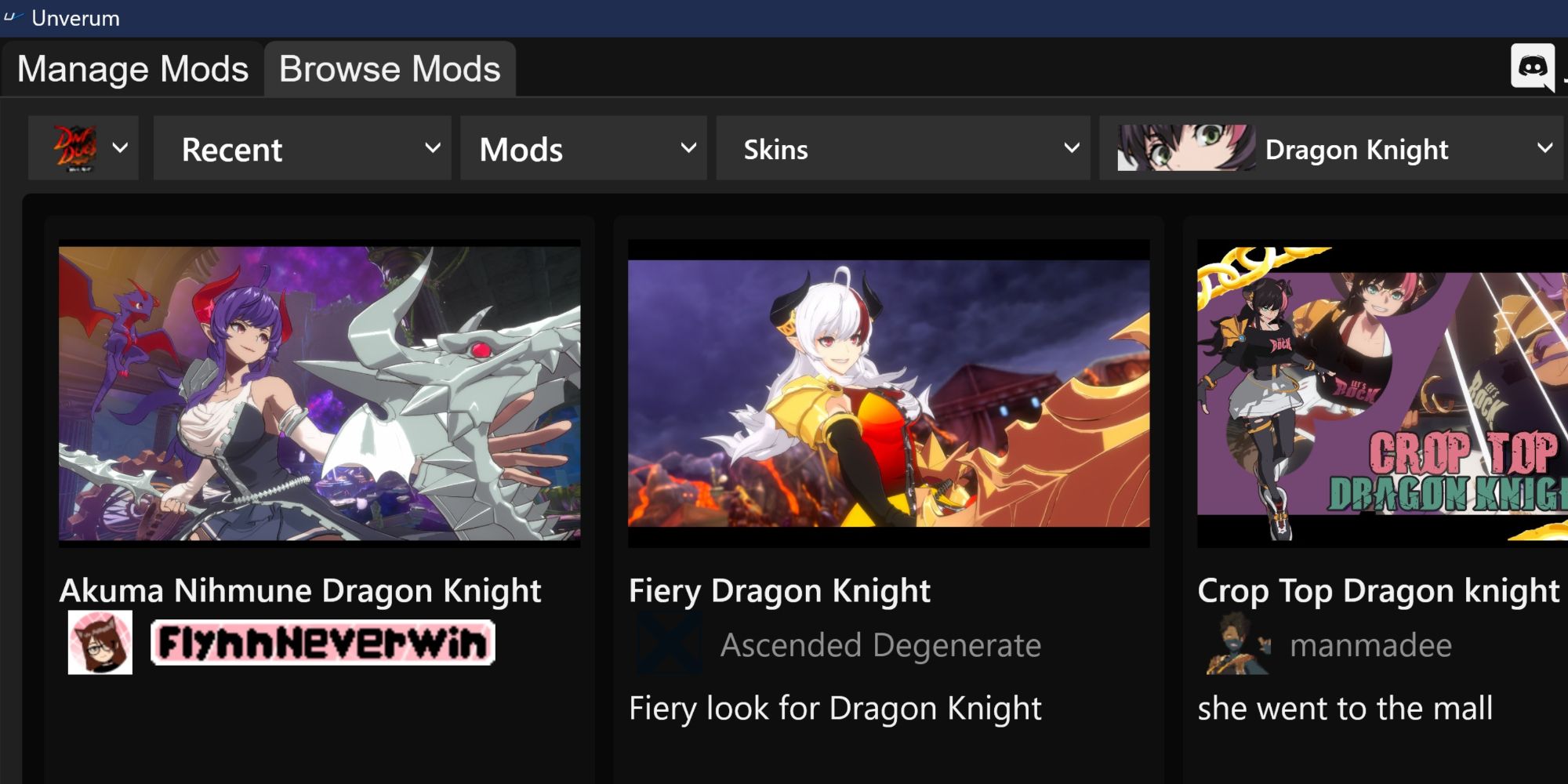 Now that DNF Duel is set up within Unverum, it's finally time to browse some Skin Mods. To do this, navigate to the top of the screen and select the 'Browse Mods' tab. Once there, you will see many mods positioned front and center, allowing you to find some of the most recently added or popular ones. However, let's narrow the search a bit to help you find Skin Mods more easily.

For this step, navigate to the top of the Mod Manager and look for a series of drop-down menus. Since they are not labeled, we will quickly go over every drop-down box below, starting from left to right:

Now that you understand how to navigate the Mod Manager to find Skins, it's time to browse to your heart's content. Whenever you find something you like, it's time to download it, which we will cover below! 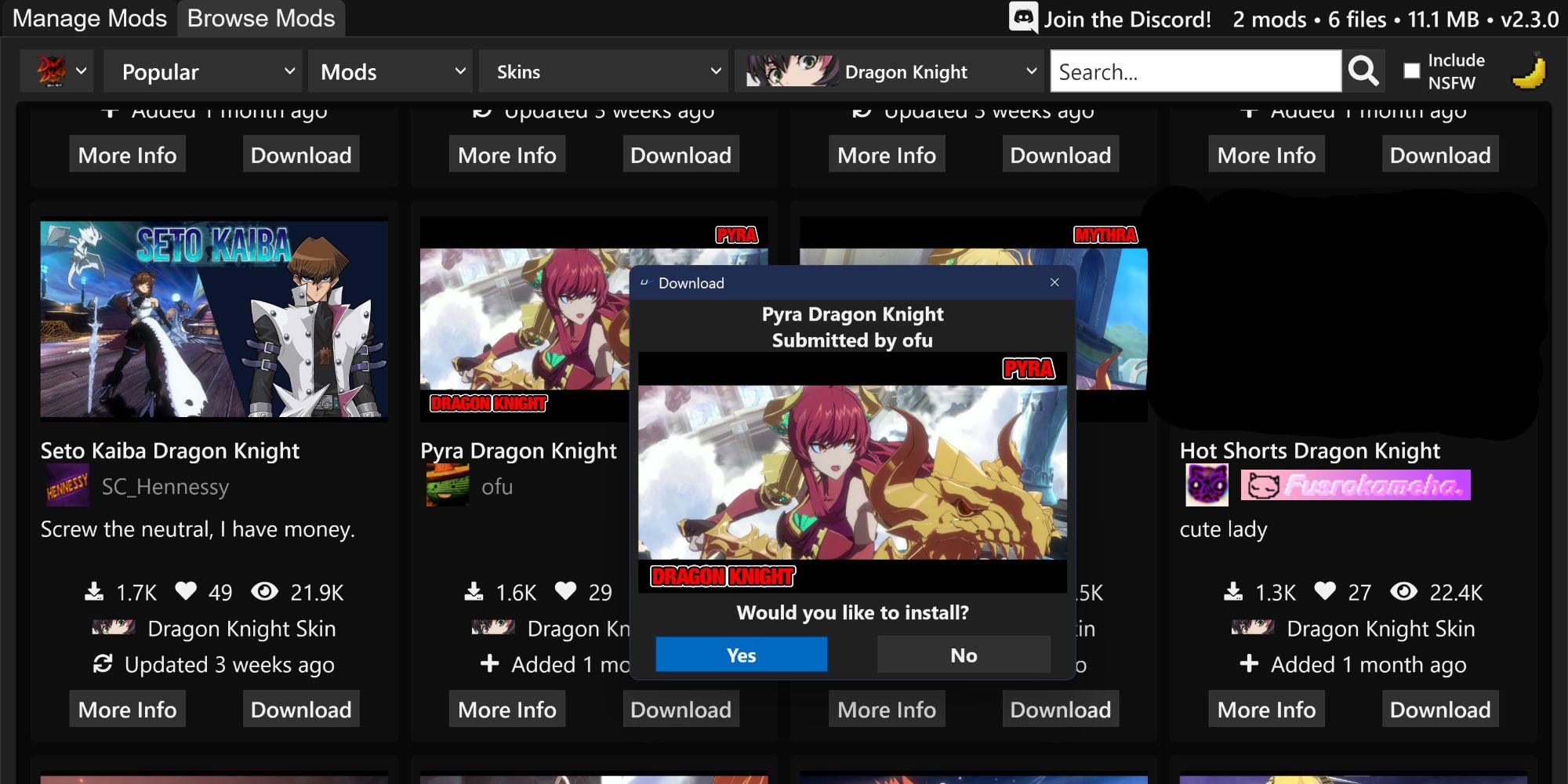 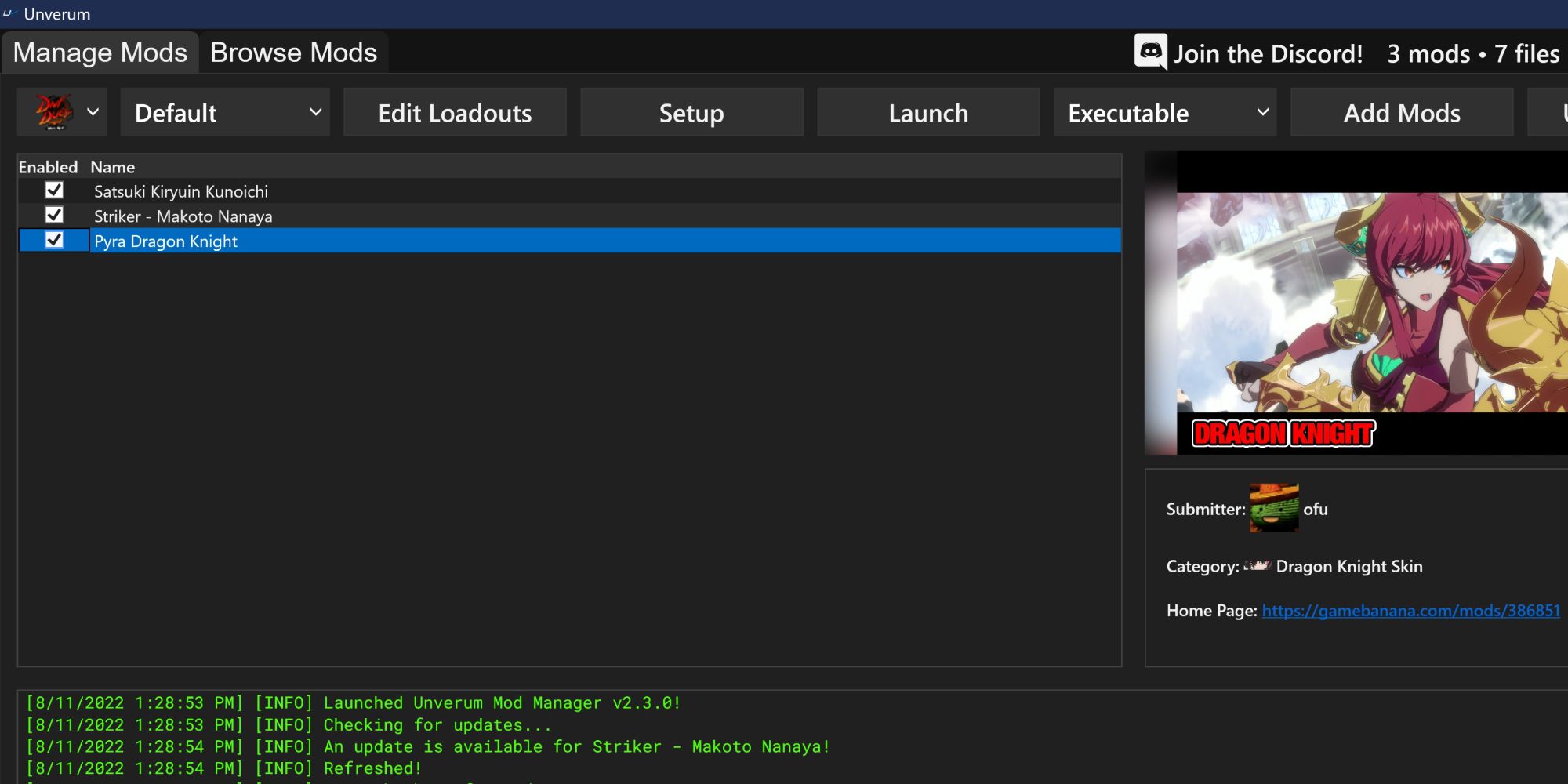 Once you have found a Skin you like, click the 'Download' button below its image to have it automatically start downloading within the Mod Manager. Some Skins may have alternate versions or allow you to choose which Skin Slot it replaces in-game, but that's typically always labeled clearly within the Mod Manager.

Whenever you download a Skin Mod you like, tab back over to the 'Manage Mods' tab at the top of the screen and make sure it's enabled by looking for the small checkbox next to the mod file. If it's checked, then all is good, and you're ready to test things out in-game! 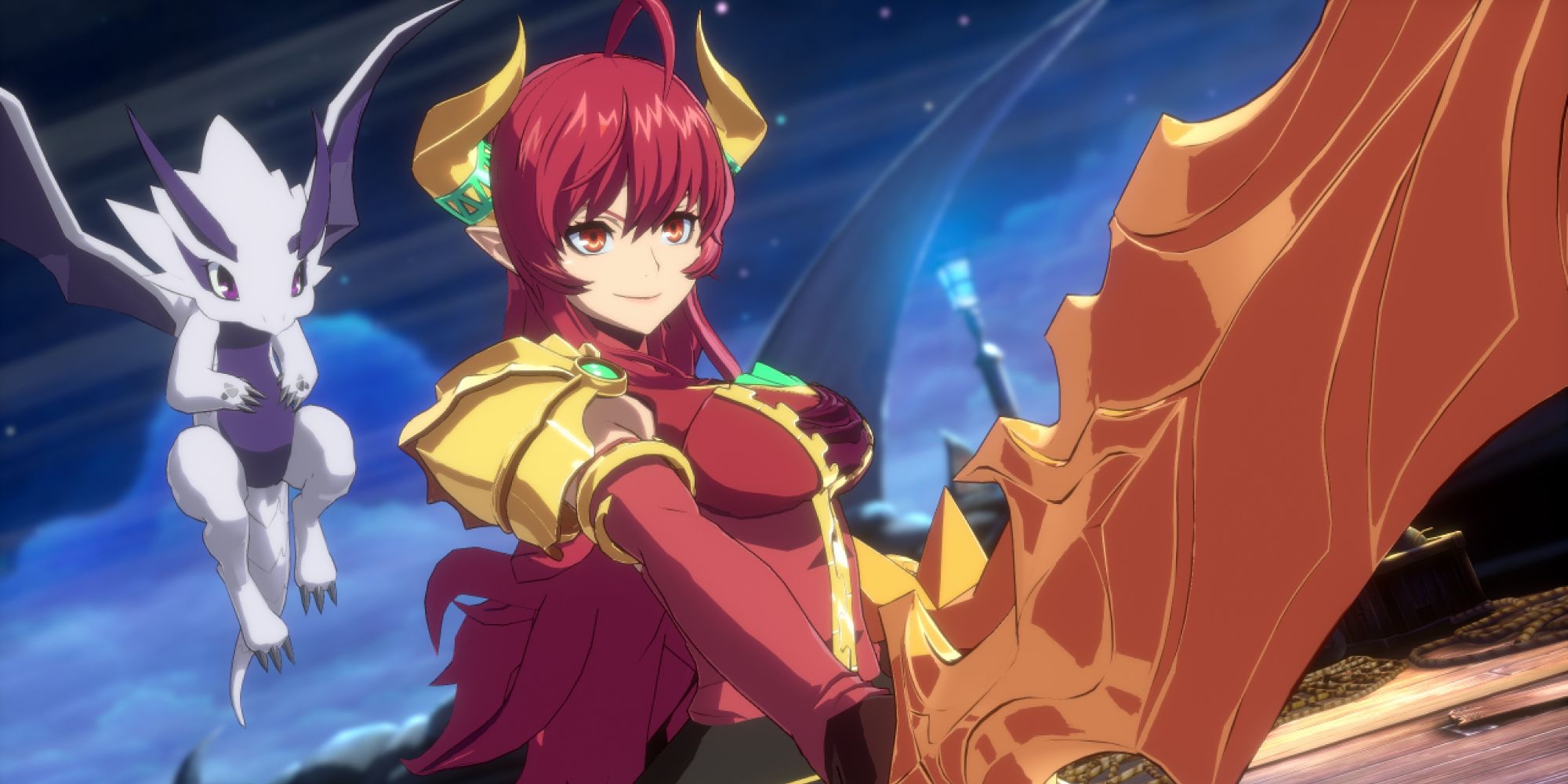 Finally, after you have the mods you want installed, click the 'Launch' button at the top of the 'Manage Mods' page to start DNF Duel. Once the game loads, boot up a quick Training Mode session and choose whichever character you modded to see if the mods were successfully applied. However, please remember that you may have assigned the Skin Mod to a specific Color Palet in the game, and you will have to switch your character's outfit color to see the mod.