At this fourth game trial, you are officially past the halfway point of the game! Don’t worry though, as there are still plenty of twists and discoveries ahead.

This trial is to determine who killed Sakura Ogami, the Ultimate Martial Artist. She is one of the characters thought to be unkillable due to her talents, however, no one is safe in this series. 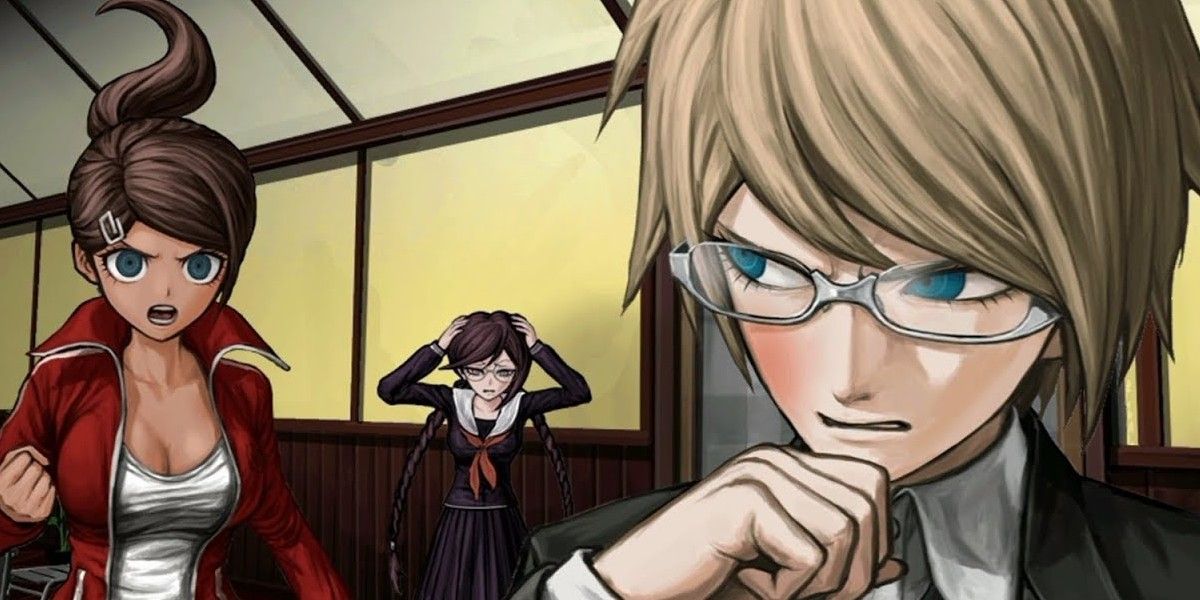 Non-Stop Debate: Shoot at statements that you can contradict with evidence. If you don’t have evidence, remember that you can absorb statements as well and use them to contradict others. There is also sometimes white noise which you have to shoot at so that it does not block a statement.

Multiple Choice: Simply pick the right answer to a question.

Hangman’s Gambit: Form a word that answers a question using the letters that fly by. Try to guess the word instead of hitting random letters.

Pick a Truth Bullet: To answer a certain question, you will have to find and select the evidence among what you’ve collected in the investigation phase.

Identify a Person: Pick a person among those at the trial to answer a “who” question.

Closing Argument: Summarize what happened by putting the right events in the correct order in a comic-style story. Remember that there will be some leftover, as they are fake. 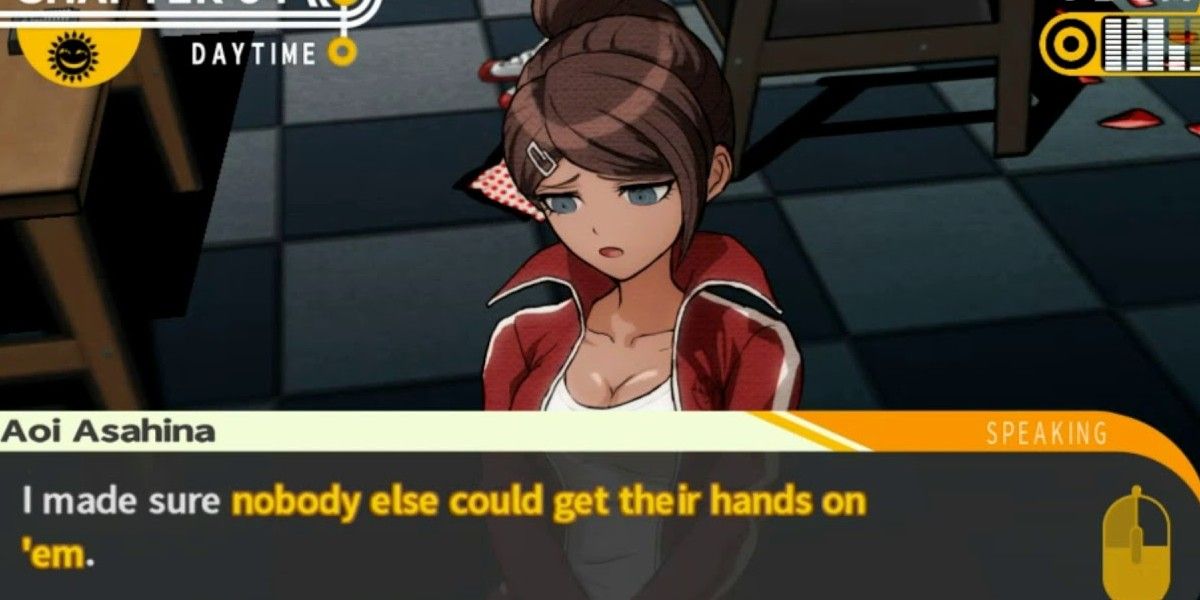 Absorb “magazine shelf” and shoot it at Hiro’s statement, “When Ogre’s body was discovered.”

After picking so much on Hiro, it’s time for a Bullet Time Battle with him. Keep to the rhythm in shooting down statements and finishing him off with the Truth Bullet Kyoko Examination Summary. 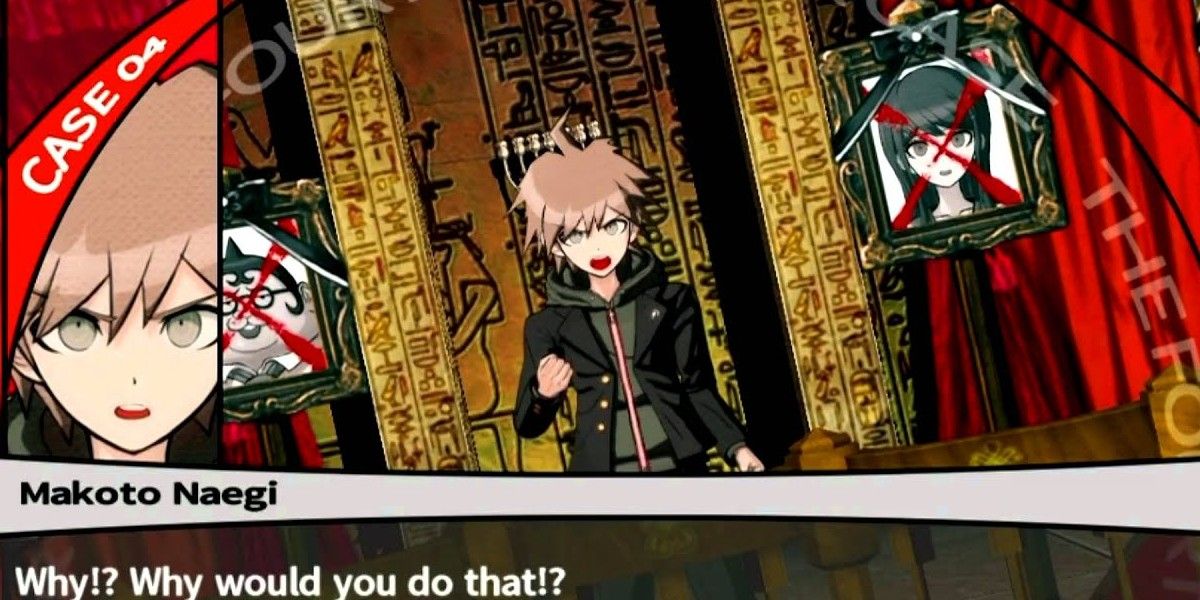 Hiro will say “Just once.” Counter that with Kyoko Examination Summary.

For when the bottle was missing question, pick It was Broken.

Select Monokuma Bottle Experiment for evidence that it was not just one broken bottle. 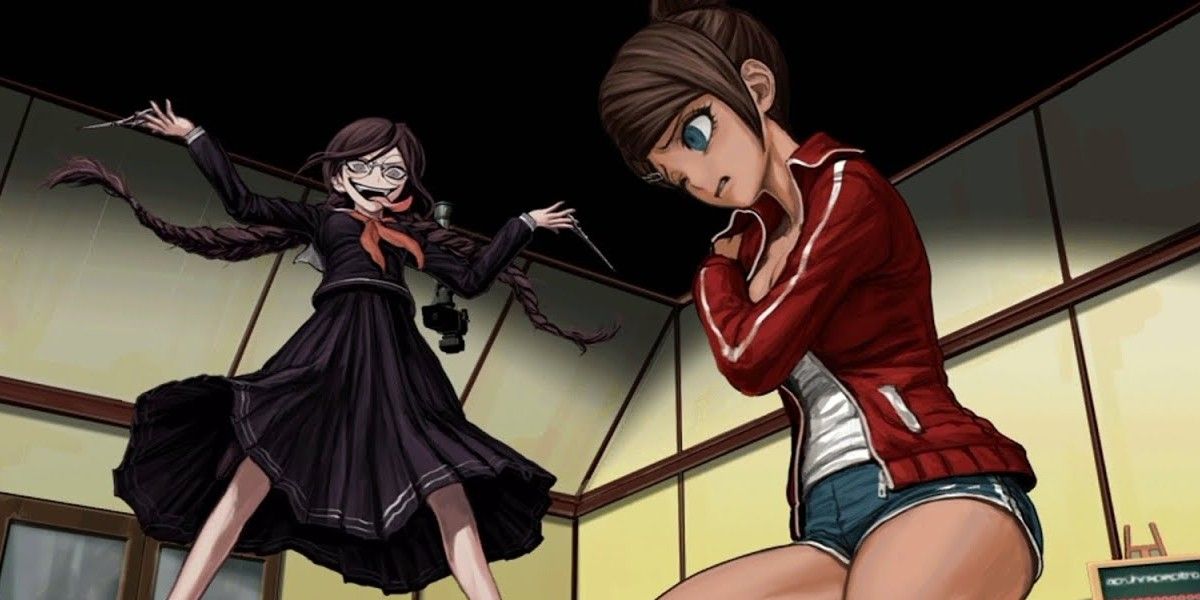 This time the battle is against Toko. Finish off the battle with the Truth Bullet, Locker Handprint.

Genocide Jack will say “I killed her there in front of the shelf.” Counter that with Status of Sakura’s Body.

For evidence that proves the attack was in front of the magazine shelf, pick Magazine Shelf Bloodstain.

Pick I saw it for myself to answer why there is no way that Toko was hiding in the locker.

Aoi will say “the shot to her head.” Counter that with Monokuma File Four. 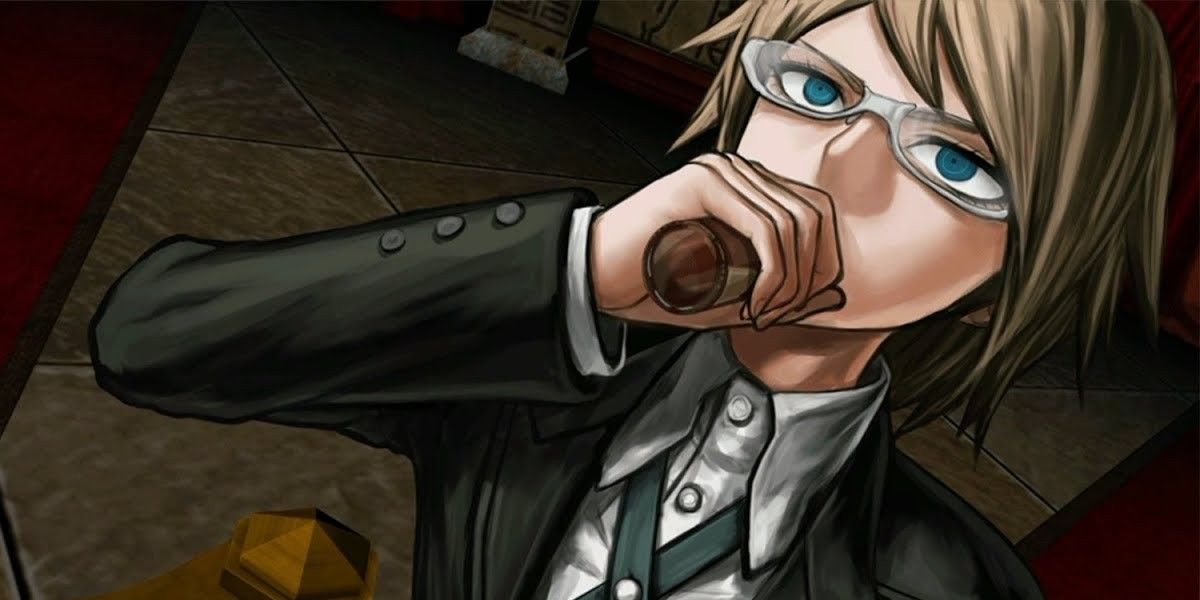 For where Byakuya got the bottle of poison, pick Section A.

Spell out Protein Drink for where the poison must have been in.

Between a cup filled with water, a Monokuma bottle, and a protein drink, pick Protein Drink.

Select Footprints in the Powder for evidence of who switched the bottles.

The only people who wear sneakers are Makoto and Hina.

Aoi will say “I moved from section C to section A.” Counter that with Footprints in the Powder. 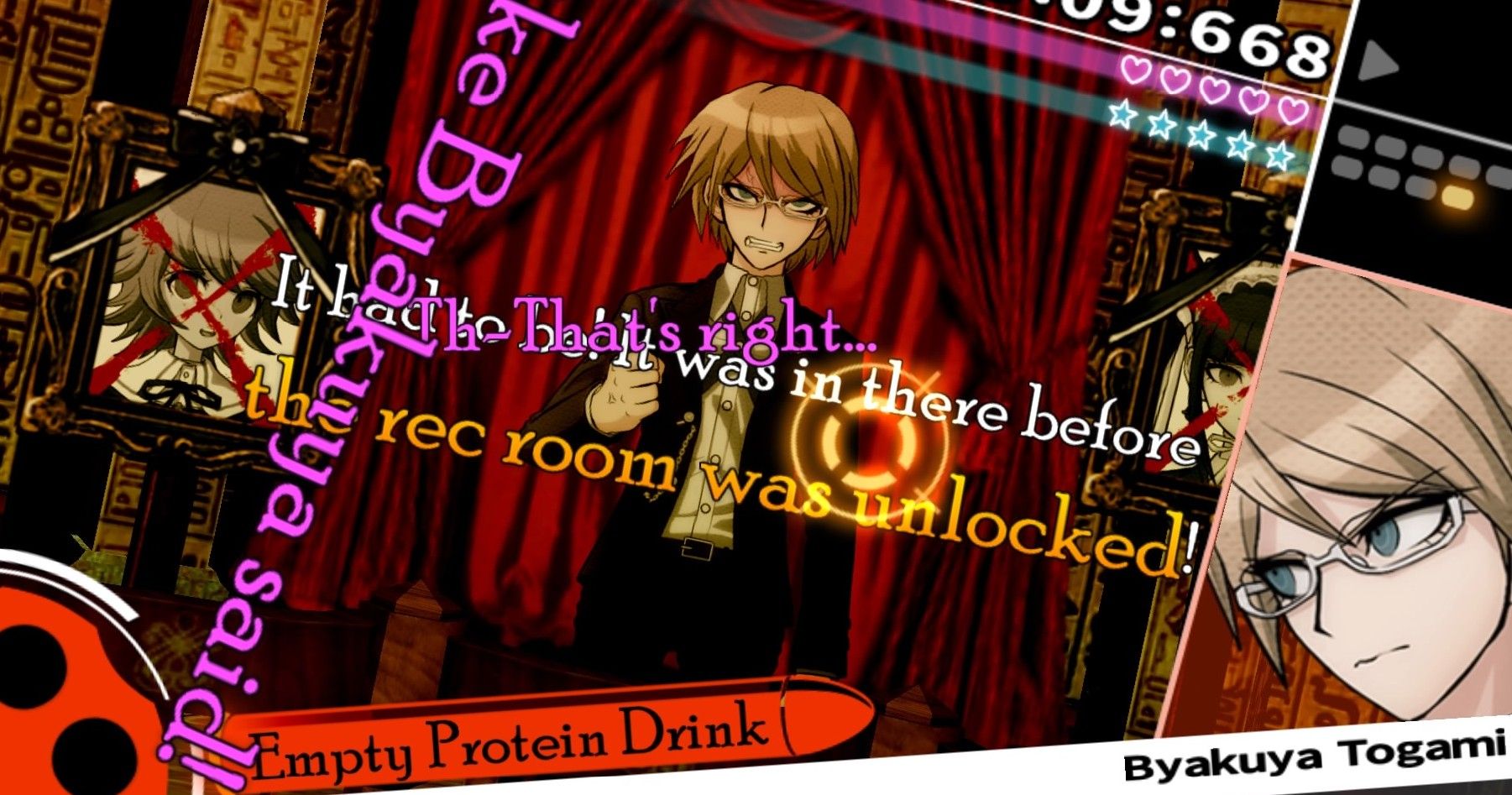 Byakuya will say “the rec room was unlocked.” Counter that with the Truth Bullet, Empty Protein Drink.

Time to play the rhythm game against Aoi. To counter her final statement, use Yellow Powder.

The time has come! This time you do not pick a living student, but one that has died. The correct answer is Sakura Ogami. Click on her sign. 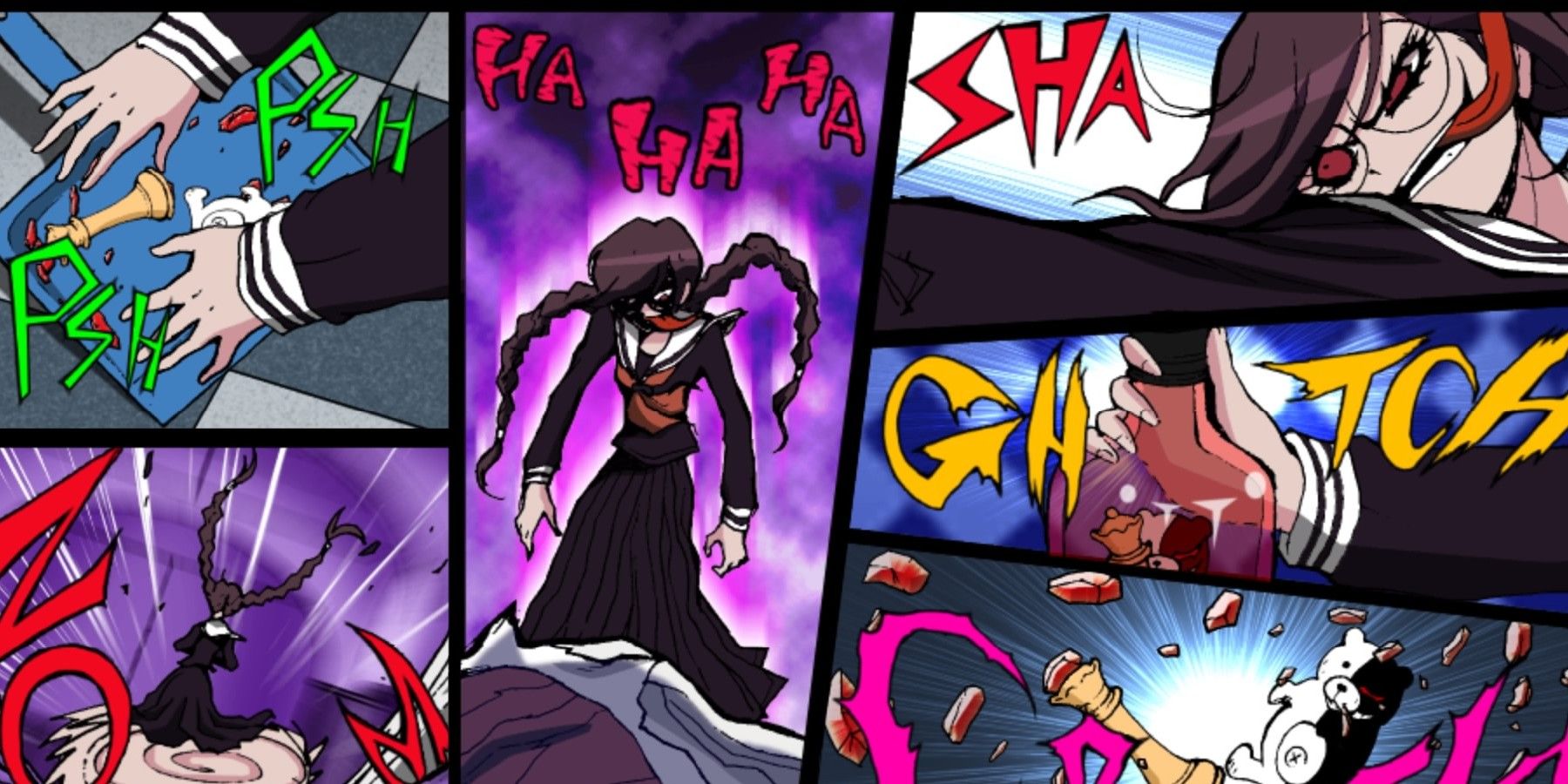 Time to create a comic of the events in order. Here is the story of how Sakura died…

Sakura sent letters for Byakuya, Toko, and Hiro to meet her in the Rec Room. Toko went earlier than everyone else and hid in a locker. Next came Hiro. He thought Sakura was going to kill him, so he attacked her with a Monokuma Bottle. He mistakenly thought that killed her, and forged a dying message from Sakura in a magazine and wrote Toko’s name with the hope to pin her for the murder.

From the locker, Toko saw everything. After Hiro left, she put the magazine back with the others. However, she accidentally put the magazine upside down. Sakura regained consciousness and the sight of her getting up covered in blood made Toko faint. Her personality changed to Genocide Jack. Jack then attacked Sakura with another Monokuma Bottle.

This is how Sakura was inflicted with two wounds. Jack believed Sakura to be dead and hide the evidence of the bottle shards and the chess piece inside. However, Sakura was not dead yet. She locked up the Rec Room and drank poison that she got from the chem lab.

The other students had to smash the door open to get in. One of the students however, knew that Sakura committed suicide. They hid the fact by replacing the poison bottle with a protein can. This was all to make others think they did the killing.

The person who did this was Aoi Asahina.