Your search for Evelyn in Cyberpunk 2077 continues, and things are going from bad to worse. After the confrontation with both Woodman and Fingers, the suspect ripperdoc, you’ll be searching for an XBD, a devious Braindance that could reveal some harrowing information. In order to find what you’re looking for, we’re heading to Jig Jig Street, Night City’s red-light district.

The first part of this quest is a straight-forward matter of chatting to people around Jig Jig street, then we’ll be examining the discovered Braindance, and finally, moving to find Evelyn’s location. It’s a long quest with a lot of moving parts, but this guide will explain everything you need to know.

This is the next major quest following Automatic Love, which we have a full guide for.

Finding Evelyn’s XBD is actually a fairly simple process. You can just follow the waypoints leading you around town, which will bring you to a sex shop, Wakako, and more. Ultimately though, the XBD is being sold by a suspicious character in an underpass. If you walk past you’ll overhear him talking with a client about his illicit goods. Buy the XBDs he has and then return to Judy, it’s time to investigate. 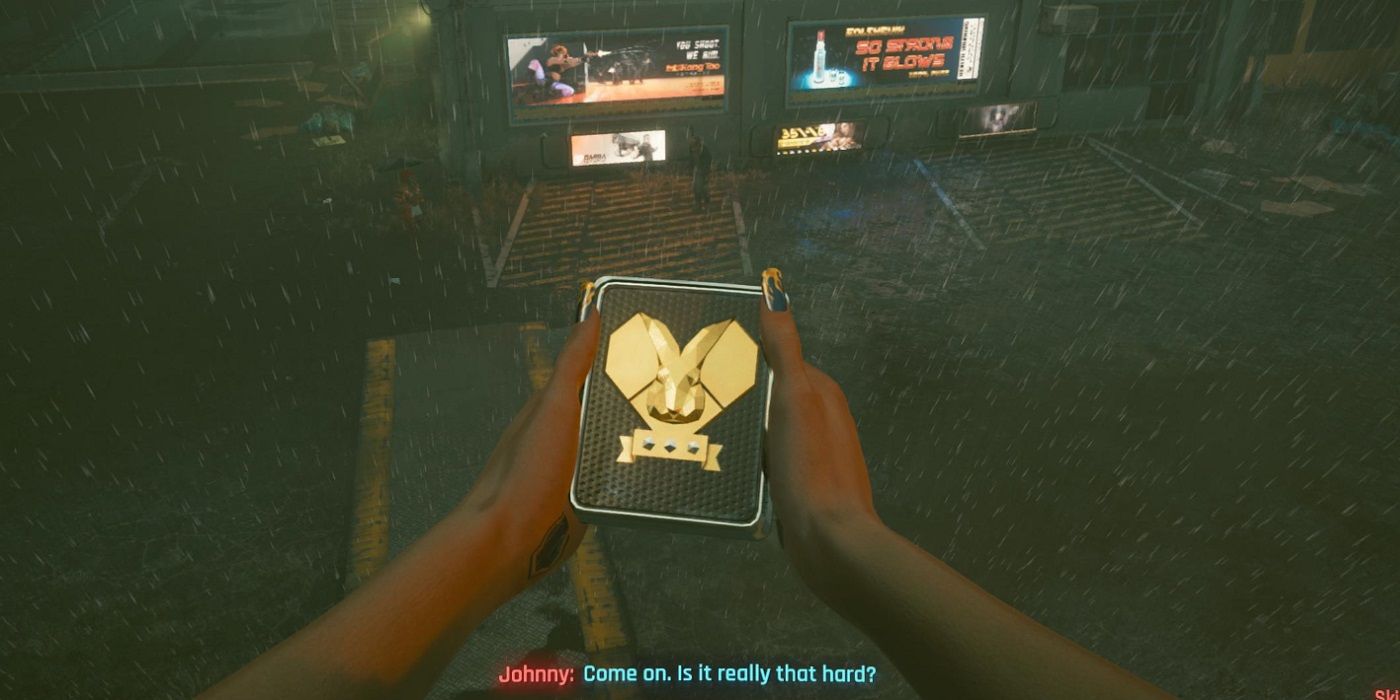 We already have a general guide for anyone confused about how to navigate a Braindance, and you can find that here. This XBD has several significant items and scenes in it, in addition to a few extra things to find. Here are the primary things you’ll need to discover:

There are also several other things you can view in this XBD, though they won’t aid you in your quest.

Once you’re done in the BD, exit and talk to Judy. It’s fair to say that she’ll be distraught – but you will have a good idea of where you need to go next. Ride with Judy to the Power Station in hopes of finding Evelyn there. 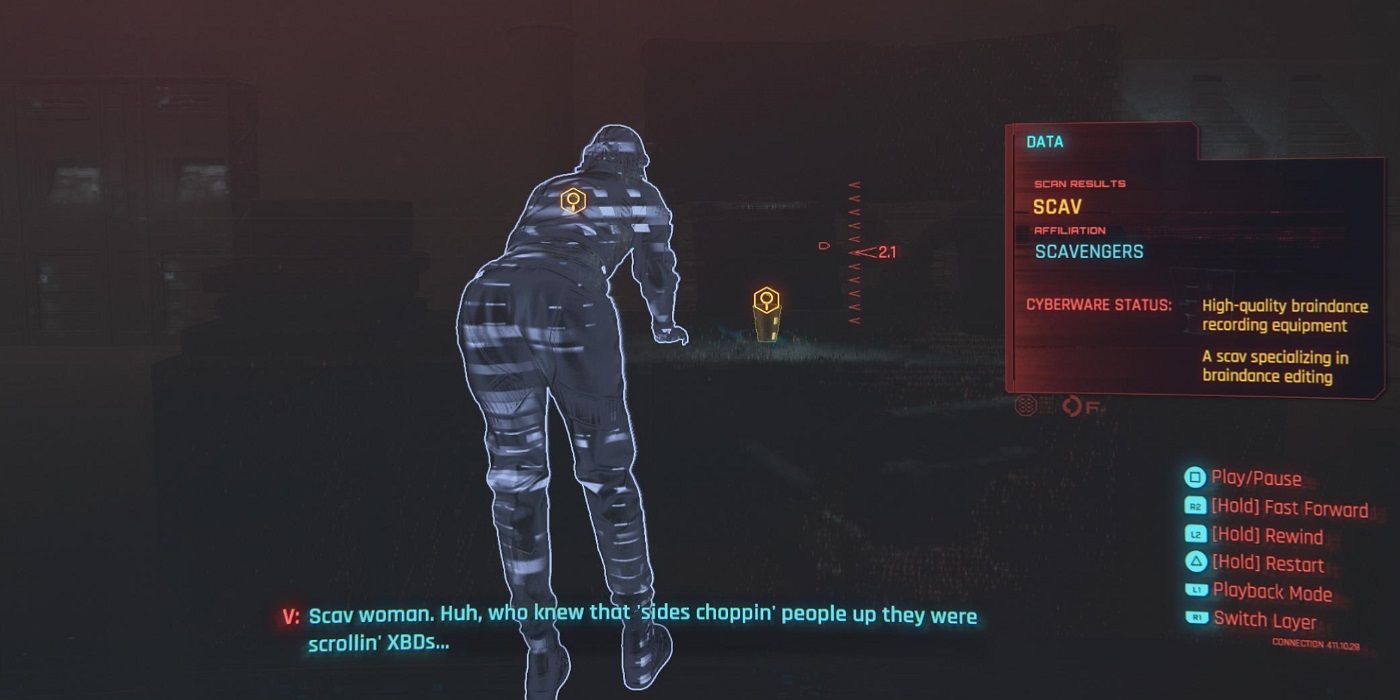 Infiltrating The Power Station In Disasterpiece In Cyberpunk 2077

If you have the correct Tech or Body attributes you can burst in through one of three doors that lead into the Power Station compound, but there is one way in that doesn’t require any attributes, and that’s to climb into the compound via some pallets on the South side. This will allow you to climb a walkway, sneaking past a majority of the guards that are positioned on the ground floor.

There are security cameras you should probably disable near the cluster of guards on the ground floor, one outside, one inside. You can sneak around the walkway to the North, and then drop down and circle around the main building until you find another place to climb and enter. Otherwise, you could always go loud and clear out the enemies with your weapons – however, you’re building your Cyberpunk 2077 character works here. On that note, take a look at our build guides for a clearer idea of how to build a powerful character.

The staircase to the lower levels is in the Southern corner of the building, and it’s down here where you’ll get closer to Evelyn. 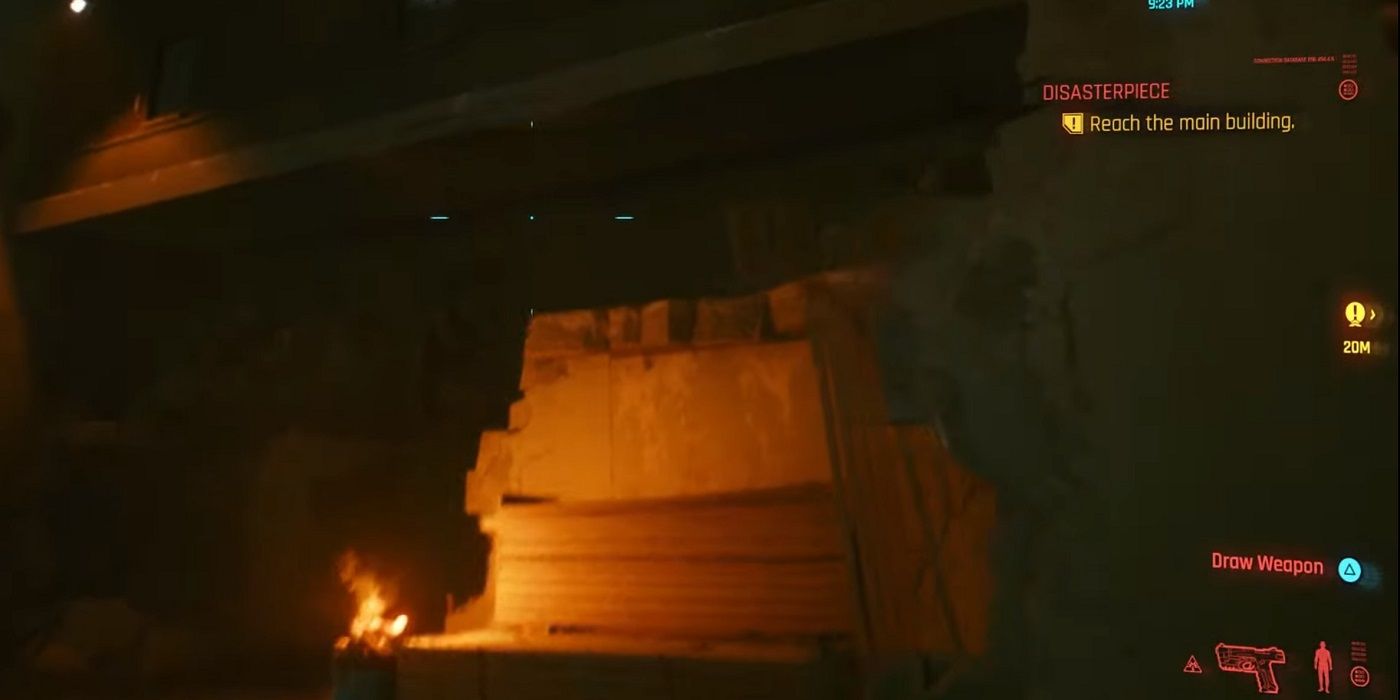 Navigating The Power Station Sub-Level With Judy In Cyberpunk 2077

If you’ve already started shooting out goons upstairs, well, there’s no much reason to stop now. Shooting foes and looting all they have to offer is certainly the fastest and most profitable, way to navigate the sub-levels of the Power Station and find what you need.

If you’re stealthing through, then things won’t be too difficult for you. Enemies are never in groups of more than two, and in one encounter Judy will even offer assistance with a smoke bomb. Though you can avoid almost all guards as long as you have your Body attribute levelled up. All you need to do is move through the main hallway past the two guards in the computer room and then stick to the right wall to sneak past two other guards and enter the first door on your right. Take out the one guard in here, and then open the shutters with your Body attribute. Finally, you’ll enter the room where Judy will assist with the smoke bomb, and find another path that leads further downstairs. 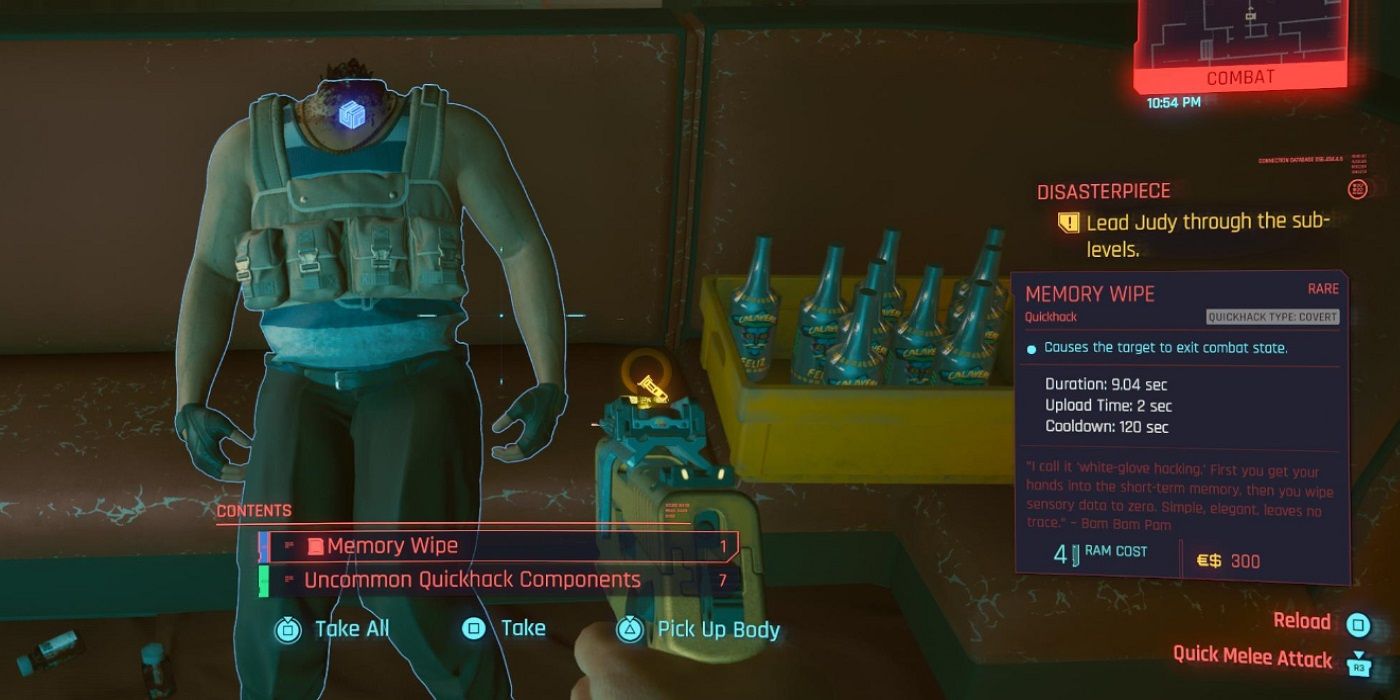 Finding Evelyn In The Power Station In Cyberpunk 2077

This area is a bit smaller than the others but has just as many enemies. If you have a high Tech skill you can open the second door on your left, allowing you to bypass all but two guards, which are simple enough to take down individually. After going through this door, just go directly through the hallway, watching for guards that might spot you, turning right, and then finding Evelyn through the first door at the end of the hall.

If you do not have sufficient Tech requirements, then you will have to go through the main room which has three guards in it, and they’ll quickly alert three more. If you stick to the right side of the room you can stealthily take down the lone guard behind some cover, but to take down or sneak past the other two you’ll have to either shut down optics or hack some distractions. Once through the large room, follow the same path through the hallway to find Evelyn.

Evelyn is alive, but won’t be doing too well, and the Trauma Team aren’t going to come out to save her. You have to return her to Judy’s apartment, where, hopefully, Evelyn can make a full recovery before telling you everything you need to know about who made her hire you for the Heist job.

NEXT: Cyberpunk 2077 Complete Guide And Walkthrough 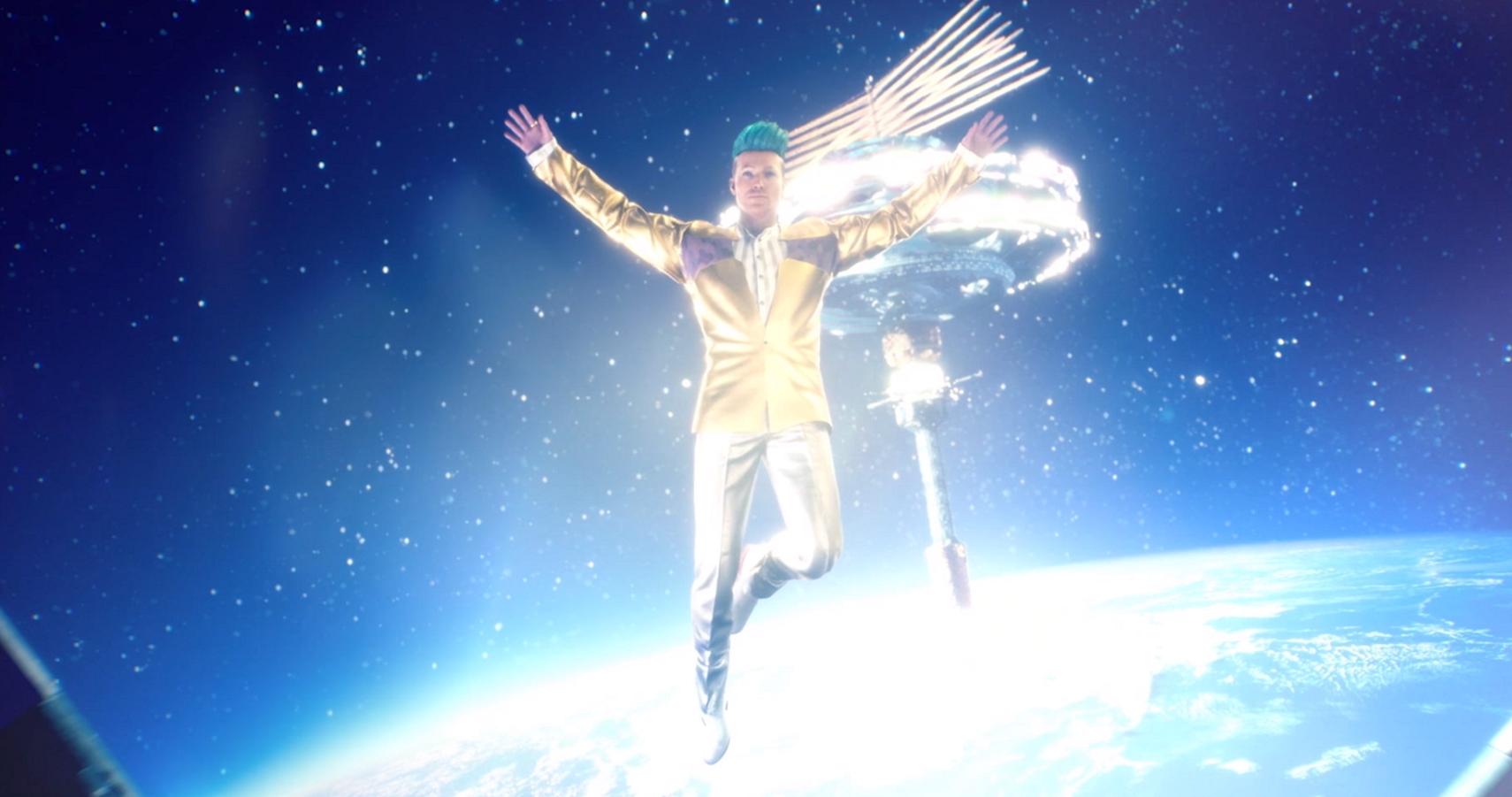