The coronavirus has taken a toll on the workforce, and now you can see a list of who’s hiring, freezing hires, laying off people, or rescinding job offers, according to crowdsourced data from Candor, a company that helps tech workers negotiate salaries. In a matter of hours, the list of more than 400 companies posted in the past day went viral, with hundreds of new tips submitted from job seekers, employees, recruiters, and VCs.

So far, the company has received reports from about 400 companies. 267, or 60%, said they were implementing hiring freezes. Candidates reported having job offers rescinded in 36 cases (18%) while layoffs occurred in 44 companies (13%).

The good news: 111 companies are hiring. But 10% of those still hiring have implemented some kind of hiring freeze, laid off people, or had offers rescinded. That’s likely because hiring continues for essential roles. It’s no surprise that Zoom, the video conferencing company, is hiring people. Twitch, Twitter, Twilio, Roblox, TikTok, Qualcomm, PUBG, Paypal, Palantir, Nvidia, Northrop Grumman, Medtronic, Lockheed Martin, eBay, Doordash, DocuSign, and Amazon are among those hiring.

The company is crowdsourcing this list directly from employees at the companies, and wherever possible confirming reports or adjusting after talking directly with company representatives. It is reviewing submissions via Intercom, Airtable, and email, prompted from contacts via its live chart. In some ways, this is more accurate as many companies aren’t announcing these moves.

Candor helps tech professionals negotiate their salary. A lot of this data is sourced directly from clients who are experiencing the situation live on the ground. Candor cofounder and chief technology officer David Chouinard put the list together to help bring transparency to the state of the job market. 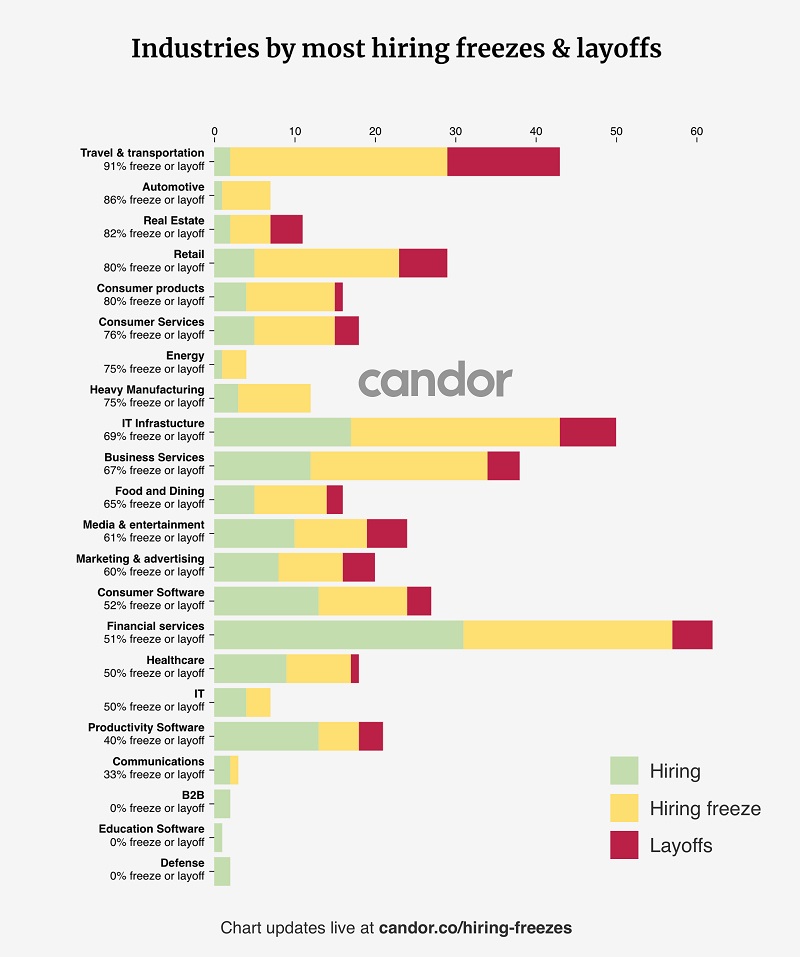 Above: Candor’s review of hiring freezes and layoffs, based on crowdsourced data.

Business software is the largest category of submissions (81 submissions), with 41 hiring freezes, representing 52% of companies in this industry.

The travel, hospitality, and transportation segment was particularly hard hit, with 95% of companies freezing hiring. Only two companies, Bolt and Cruise, report they are still hiring. All booking platforms — like Kayak, Expedia, and Booking.com have suspended hiring. Uber and Lyft have a headcount freeze but continue to backfill already open positions. 12 companies — like Bird, Expedia, Sonder, Mondee, and Knotel — have confirmed layoffs.

In real estate, only one company out of eight, Nextdoor, reported still hiring. All job search companies have hiring on hold — including LinkedIn, Indeed, and Glassdoor.

In media and entertainment, seven companies, including Netflix, Hulu, and Disney are putting roles on hold. Only 46% of companies continue to hire. And in food and dining, 25% of 12 companies are still hiring. Doordash and Instacart report strong hiring. Zerocater, Deliveroo, and Snackpass have frozen hiring.

The business software industry has 34 companies, or 41%, still hiring, the largest category. Financial services and consumer software were the next largest industries, with 22 and 14 companies still hiring respectively.

As for the big tech companies, Facebook announced in a recent internal Q&A that the company plans to continue hiring. However, it is canceling interviews for internships. Some Apple employees are starting to report hiring freezes. At Amazon, there’s a large hiring spree, as its business model is more resilient to slowdown. Amazon’s physical stores teams are not currently hiring. Google is continuing to hire across all of its divisions.