Home » News » Breath Of The Wild Roasts You For Roasting Radishes

Breath Of The Wild Roasts You For Roasting Radishes

In the wake of Age of Calamity’s release, Breath of the Wild fans are laughing about some fun Easter eggs in the original game, including one particularly roasting response to…well, roasting.

The Legend of Zelda: Breath of the Wild was released in March 2017 after being hyped at major games conventions for several months beforehand. With its breathtaking open world and intricate story that still features secrets to uncover, Breath of the Wild has earned Nintendo record sales numbers. What really drives fans to keep playing, though, is the wealth of hidden content to discover after you’ve finished the main story. From extremely dangerous Cucco attacks to hidden connections to previous games, Breath of the Wild seems determined to keep offering fans new content to enjoy.

This particular piece of new content, posted by Reddit user TrainerGlitch, is the flavor text (pun fully intended) that pops up when you roast a Big Radish. The screenshot reads, “A roasted big hearty radish. To take such a precious vegetable and put it to the fire is decadent in a way.” This not-so-subtle dig might make a new player feel a bit silly about cooking an item that’s already so good for your health. It’s not entirely clear whether the developers intended this to be a jab at player’s inexperience (or perhaps overindulgence), but, given Nintendo’s track record of silly humor hidden in its more serious games, we can guess that it’s probably at least partially meant. 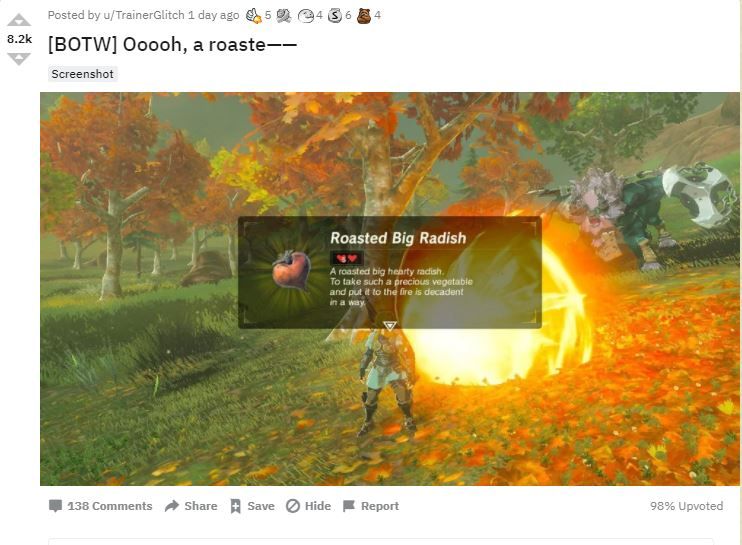 Breath of the Wild fans have taken the joke in good humor. The comments below are brimming with responses continuing the roast. User EasyBakeRoboCake comments, “they’re saying you’re bougie af,” which feels pretty accurate, while Secretunnelatla adds, “a roasted Hylian.” These fellow fans were somewhat more interested in roasting the original poster for taking a screenshot immediately before being engulfed by Lynel flames, to which user Mr_Jelly_Boy cleverly added, “That radish isn’t the only thing the lynel will be roasting.”

This is the community that grew up on Nintendo’s brand of family-friendly but not edgeless humor; is it really a surprise that they’re just as good at dishing it out? We can only hope that Age of Calamity, while considerably darker in tone, will have honest, somewhat silly moments like this to find down the line.