CMON recently announced a total of five additional miniature sets for A Song of Ice and Fire: Tabletop Miniatures Game. These incoming sets represent Unit Attachments, individual leaders that faction army commanders can use to support and bolster their standard forces on the battlefield. Each boxed set is priced at $39.99 with shipping dates not yet revealed.

A Song of Ice and Fire is an expansive wargame, and you may already have numerous sets collected to make up your tabletop army. But as the Getting Attached announcement post states, those right out of the box miniatures “are designed to represent the baseline for that unit.” There is a way to customize those baseline units to give them increased skills and abilities, and that is with Unit Attachments.

Unit Attachment sets contain leaders that “can add unique Orders, change stats, and provide players a ton of new options.” These Unit Attachments will be coming out for almost all of the current factions, and this month’s release includes five boxed sets for House Baratheon, House Lannister, House Stark, the Free Folk, and the Night’s Watch.

House Baratheon Unit Attachments feature the Lord of Dragonstone, the Master Warden, and the Stag Knight Noble. These Attachments give units more freedom to Maneuver and Charge, negate enemy Charge, Flank, or Rear bonuses, and allow them to make an extra Melee attack at an enemy.

House Lannister Unit Attachments contain The Champion of the Faith, the Sentinel Enforcer, and the Turncoat. These Attachments allow House Lannister units to restore Wounds with a successful Morale test, goad enemy units into recklessly charging their attached unit, and can cause enemy player Orders or Tactics Cards to fail. 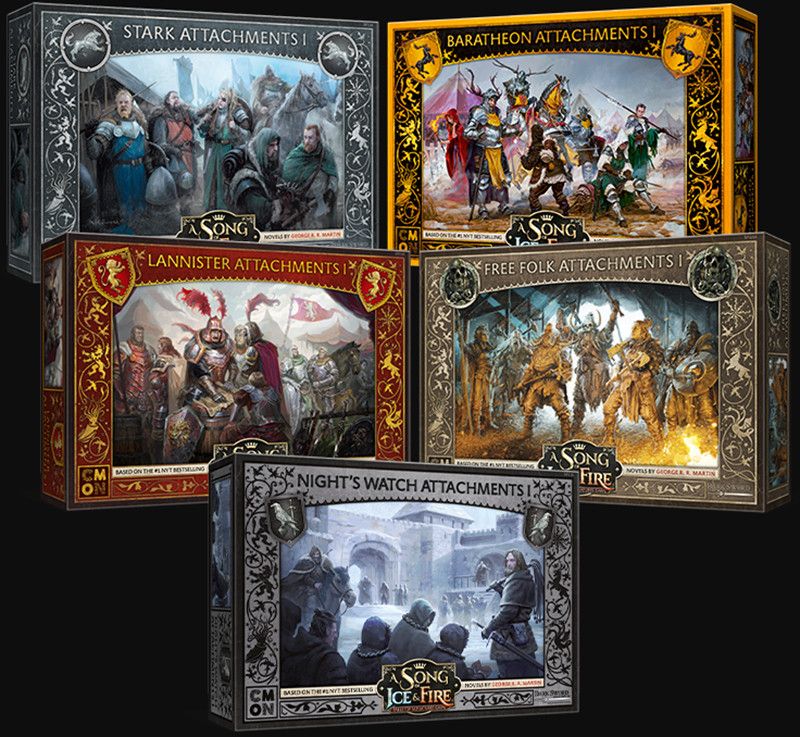 House Stark Unit Attachments consists of the Crannogmen Warden, the Sworn Sword Captain, and the Umber Champion. These Attachments can allow your units to immediately make enemy units Vulnerable, bestow +2 dice and Vicious to the friendly unit, and reroll all attack dice against non-activated enemy units.

The Free Folk Unit Attachments include the Chosen of Styr, the Raid Leader, and the Spearwife Matriarch. Their abilities include automatically making an activated enemy unit Weakened (no roll required), activating a second friendly unit to attack the same enemy target, and giving Orders for a free Retreat action whenever they’re attacked in melee.

Lastly, the Night’s Watch Unit Attachments include the Senior Builder, Watch Captains, and The Watch Recruiter. These Attachments allow Night’s Watch units to immediately gain control of a Zone even if the Zone is enemy-controlled, place Stake terrain on the battlefield to create hasty defenses, and grab foes right out of enemy units and induct them into the Night’s Watch.

To read all the full details about these incoming Unit Attachments, click over to the CMON website for the official announcement post and the sets’ respective description pages.