Ahh Isabelle, that cute Shih Tzu who’s always there for you when you need it. This dog assistant is perhaps, one of the most well-known characters of the Animal Crossing franchise. And for a good reason, as she’s always trying her best to help the player build a better town.

She’s at the center of most memes related to Animal Crossing due to her charismatic personality, hard-working attitude and enigmatic friendship with the Doom Slayer. Now without further ado, let’s laugh together looking at hilarious Isabelle memes. 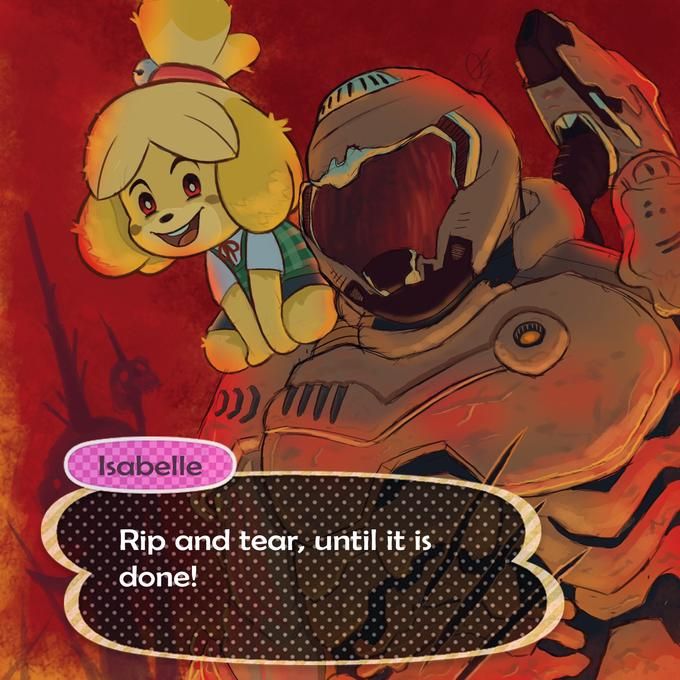 Who would’ve thought that two characters from totally different franchises would’ve ended up as friends? Ever since Animal Crossing: New Horizons and Doom Eternal launch dates were announced, fans have been drawing fan art of the Doom Slayer having a good time with Isabelle and other friendly characters from the AC franchise.

In this meme you can appreciate how Isabelle is having a good time with someone who literally instills nightmares in demons. Fun fact: The Doom Slayer used to have a pet bunny called Daisy of whom he cared deeply, so it wouldn’t too far-fetched to think that he and Isabelle would get along nicely. 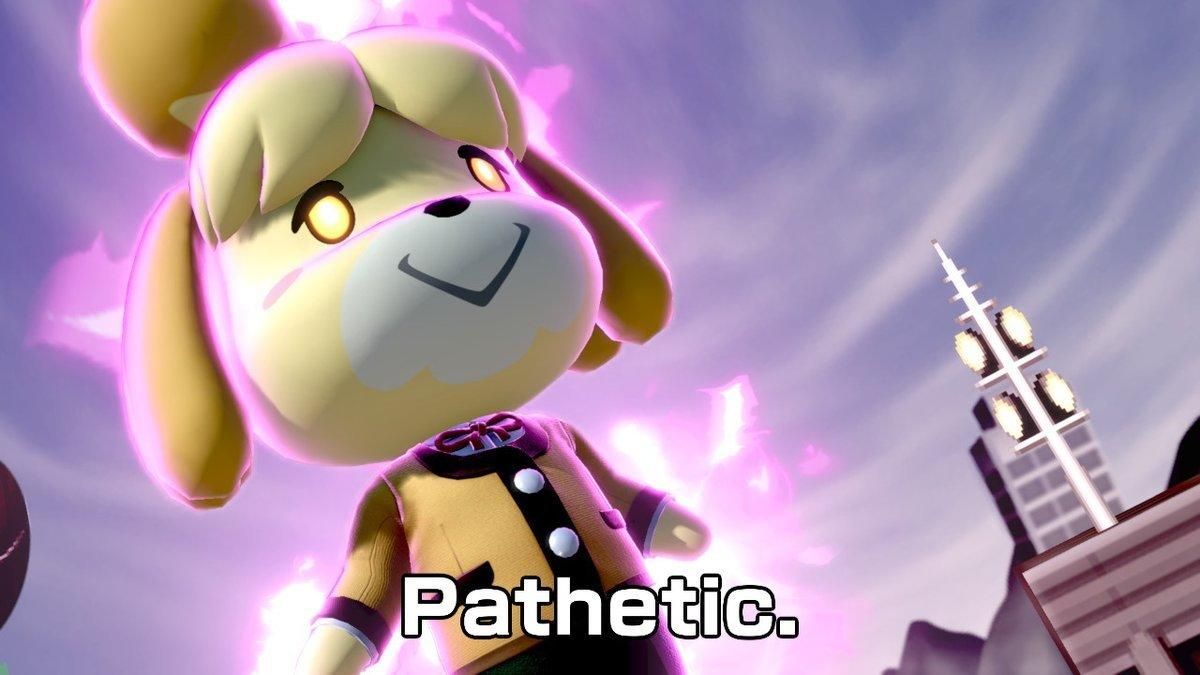 Those who main Isabelle on Super Smash Brothers Ultimate do so for only one reason: They like to drink the tears of their enemies. Well, maybe it’s just because they like how cute she is, but once you face someone who’s able to literally fish you out of the stage just to throw you again you just give up.

And if you think about this meme, that’s probably the face that Isabelle puts on when you ask her for help, as she’d surely think that being the Mayor of her town you’d be more capable. Pro-tip: Use this meme to make a cool sticker to use on your chats. 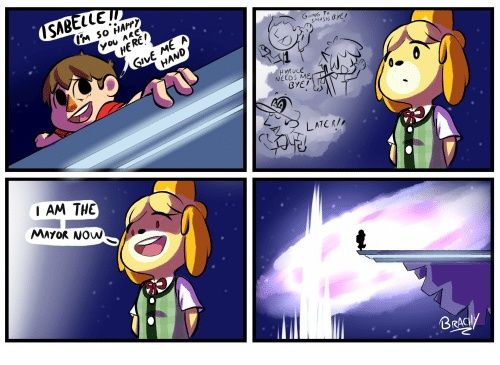 Gamers who’ve played Animal Crossing: New Leaf know Isabelle very well. She tries her hardest to help players become great Mayors, as she cares deeply for the well-being of her town. But, sadly, not all players appreciate her help, or her town for that matter.

Since the game keeps a good track of time, Isabelle will recognize dates and alerts the players of things the game thinks the player should know. It would have been awesome if Isabelle recognized Smash Ultimate players who’ve played Animal Crossing before, as she’d surely want to avenge her town. 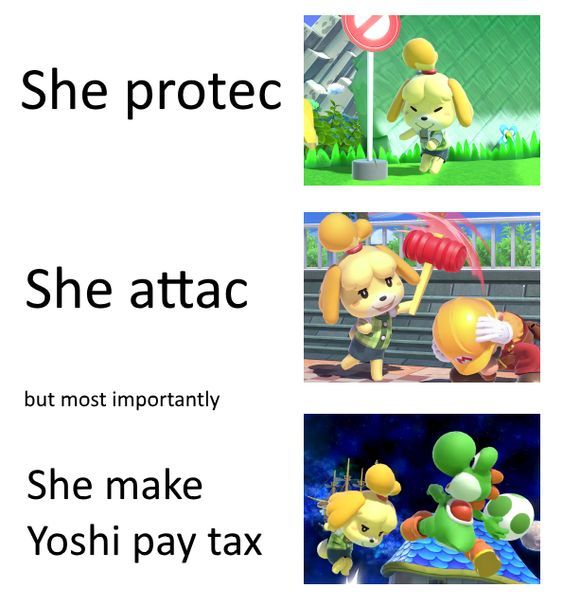 Yoshi is a green dinosaur who despite his cute appearance, is actually  suspected of committing tax fraud on his own island. If he were to go to Isabelle’s town he’d sure try to evade his taxes there too, but luckily, Isabelle is there to enforce the law. Maybe joining Smash wasn’t such a bad idea after all. 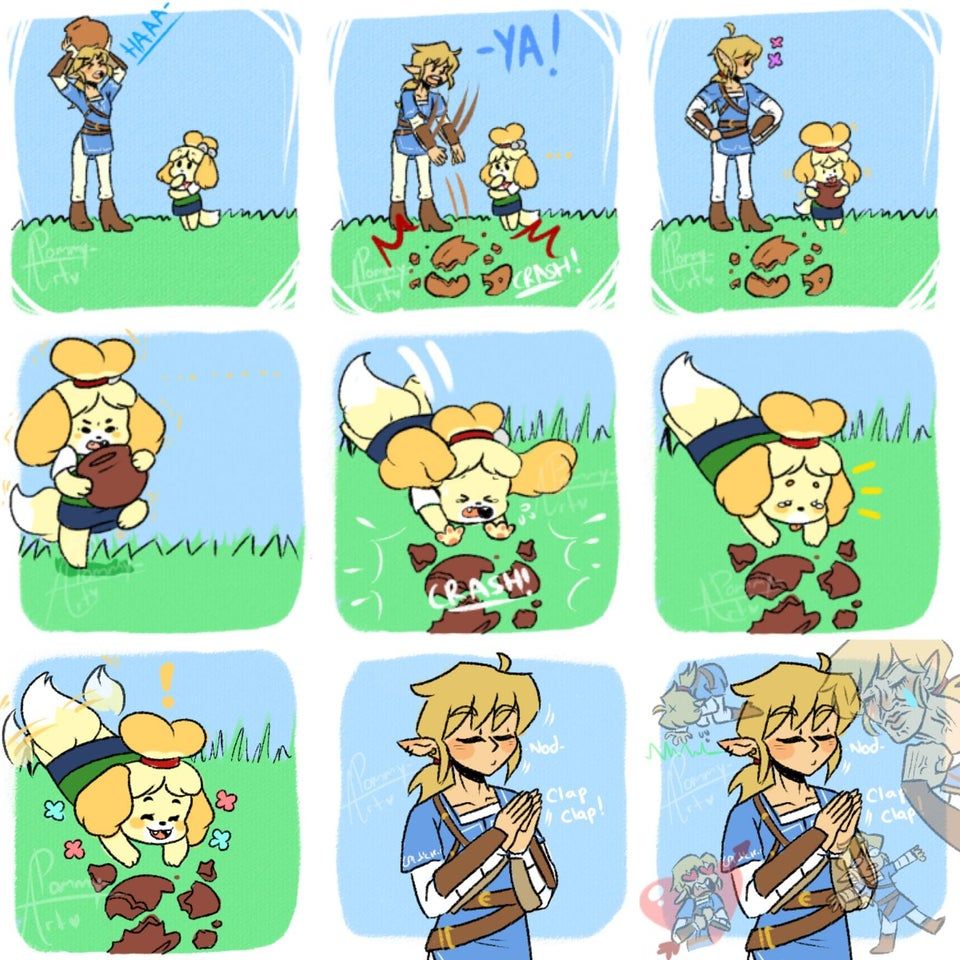 Isabelle’s pot breaking dash attack is probably one of the most heartwarming moves of Super Smash Brothers Ultimate. This attack makes her draw a small pot that gets inevitable smashed when she trips over, dealing damage to all enemies who get hit by it.

And who better to train her at the fine art of pot breaking than Link, the guy who has made a fortune by means of breaking hundred of pots open to find rupees. It is funny to think that instead of helping her achieve a better balance, he’d probably teach her to just throw away the pot. 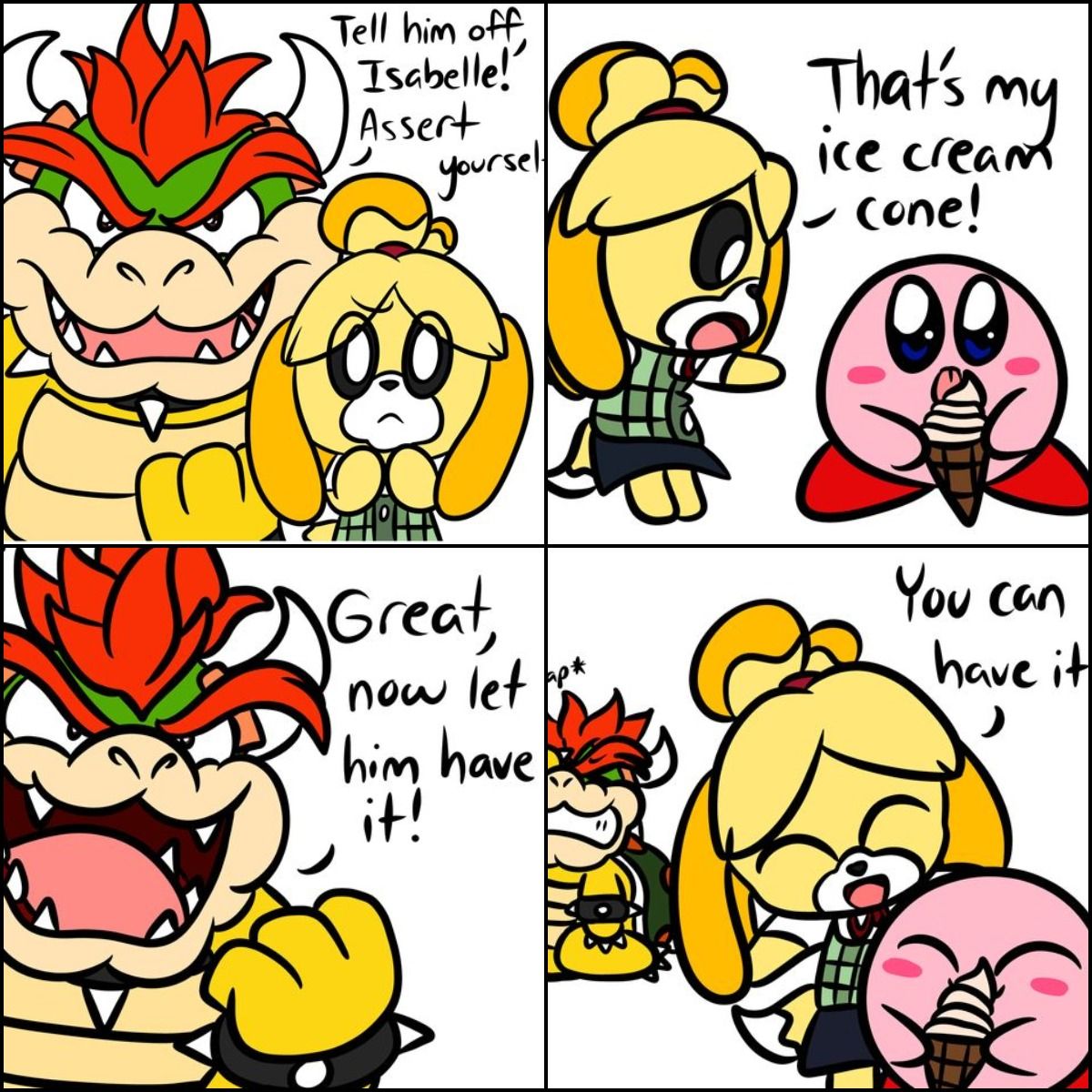 While it’s funny to put Isabelle in dangerous situations, we shouldn’t forget that she’s actually a being of pure love, and that she’d be more likely to make new friends than to gent into fights.

In this meme, you can appreciate how Bowser is trying to convince her to be more mean, in the same way that Plankton tries to make Spongebob be more assertive. While they are all different characters, we should all agree that the scene would likely play the same if Bowser and Isabelle tried to reenact it. 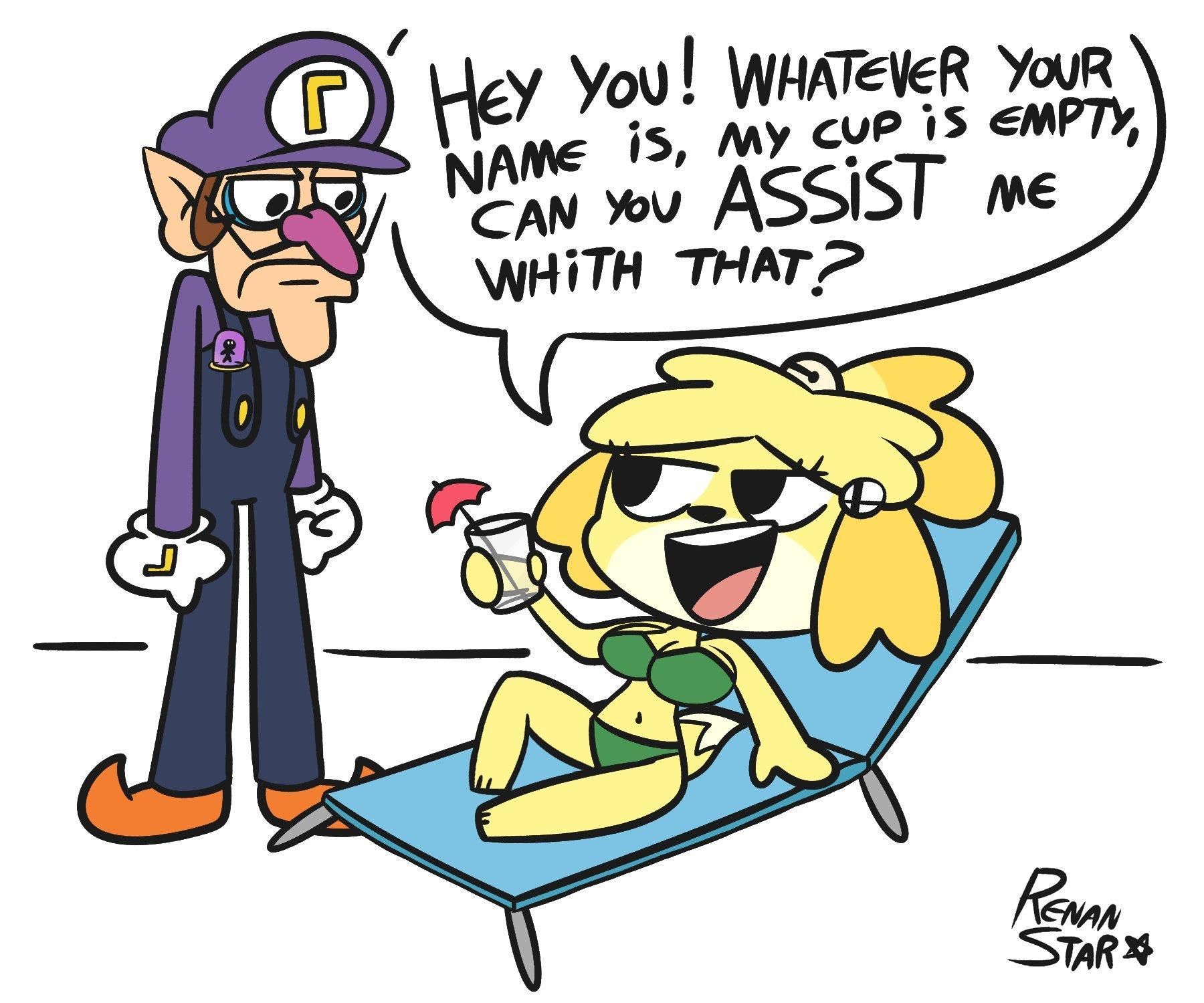 Assists trophies are probably Isabelle’s favorite items in Super Smash Brothers. After all, she has spent so much assisting the Mayor that she’d surely love being assisted once in a while, specially if it allows her to abuse her power.

Fun fact: Before being a playable character in Super Smash Brothers Ultimate, Isabelle used to be an assist trophy in Smash 4, which is something that surely irritates Waluigi even more. 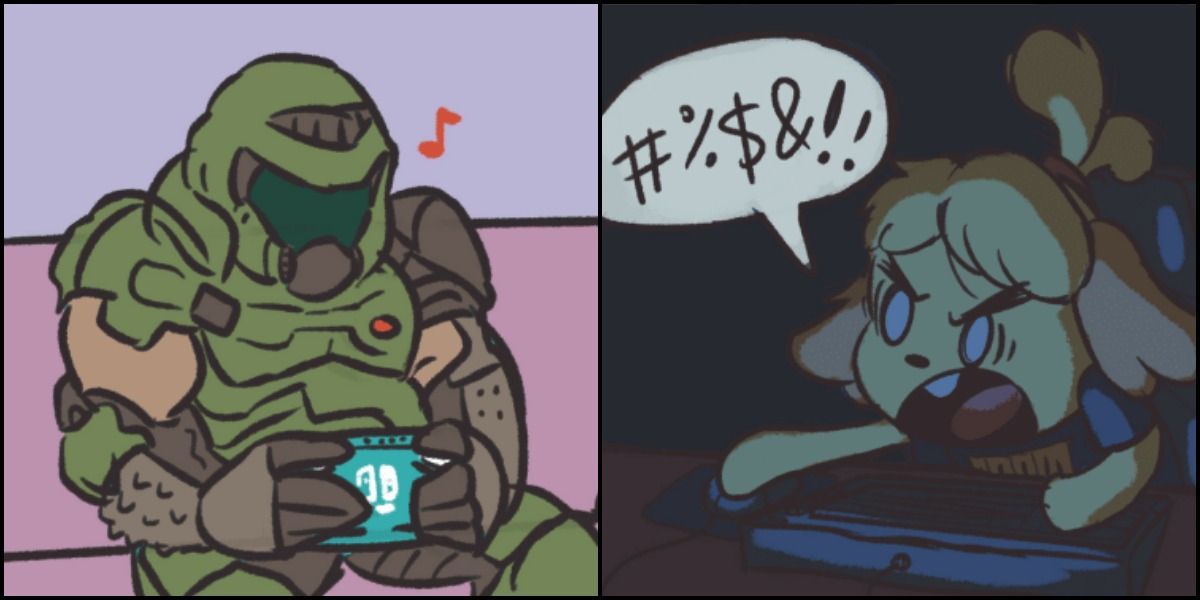 Being the Mayor’s assistant in Animal Crossing: New Leaf is surely one of the most stressing jobs in town. And let’s face it, it’s hard to maintain a smile forever, and it’s even harder to do so when it’s your job and your boss is always doing crazy things.

It wouldn’t be a surprise if she spent her free time relieving her stress playing a fast-paced brutal shooting game, like Doom Eternal. Meanwhile, the Doom Slayer would probably play Animal Crossing: New Horizons in his Fortress of Doom after driving demons to extinction. Again. 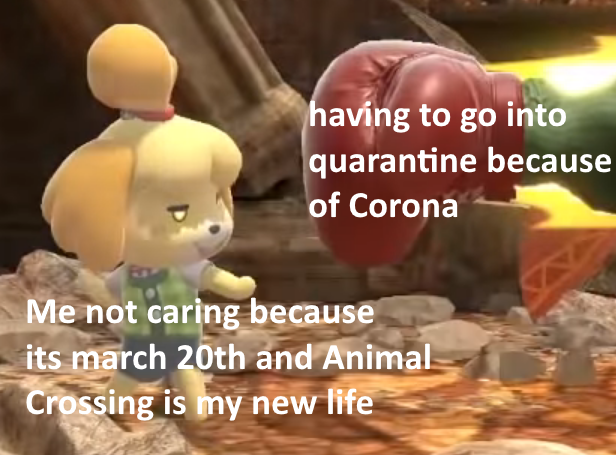 Animal Crossing: New Horizons launch couldn’t have come at a better time. Most countries around the world have urged their citizen to stay at home, since it’s the only effective way to prevent Covid-19 from spreading.

Gamers all around the world are getting Animal Crossing: New Horizons as a way to stay relaxed at home, as the game itself is friendly to new and returning players. And in case you’re already playing it, you might want to know that Isabelle won’t appear in-game until you’ve unlocked the Town Hall. 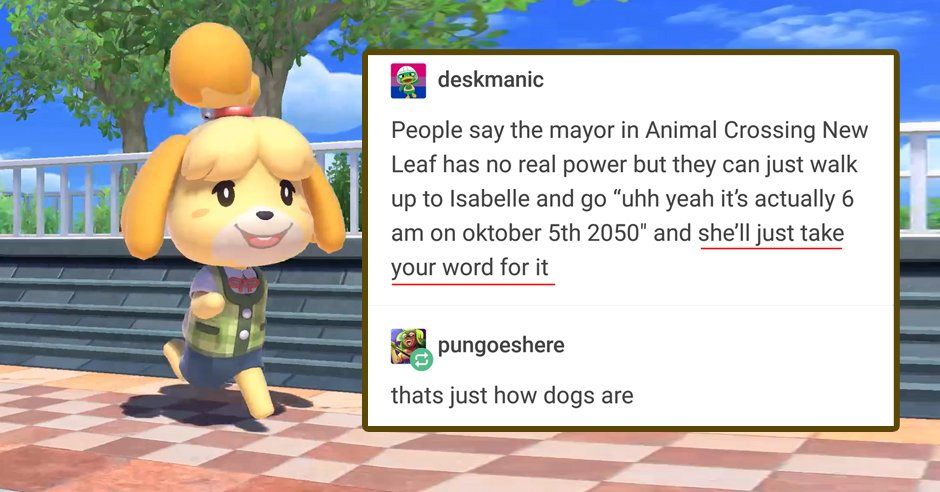 Have you ever wondered why Isabelle is always there for you? Or why she always believes in your words or your decisions no matter what?. Well, that’s just how dogs are, they will trust you and your judgement as that’s just their nature.

She has so much faith in you that she will delete her town along with everything she loves if you ask her to do so. So make sure to treat her right in games, as she’s probably one of the few game characters who’s always there for you, even if you leave her town for years.