Age Of Calamity: Pro Tips For Playing As Terrako

Although it doesn’t seem like it at first glance, Hyrule Warriors: Age of Calamity’s Terrako, the little egg-shaped guardian who jumped through time to save Princess Zelda, is surprisingly strong in battle, even when compared to the likes of Link or Impa. Wielding the same weapons as a Guardian Scout, Terrako brings several powers of a guardian to the side of Hyrule, though his playstyle, unfortunately, doesn’t involve more time travel.

Terrako is only available once the main storyline has been completed. However, considering the sheer volume of side missions and the replayability of the main story missions, this isn’t much of an issue for players who wanted to control Terrako throughout the main game. 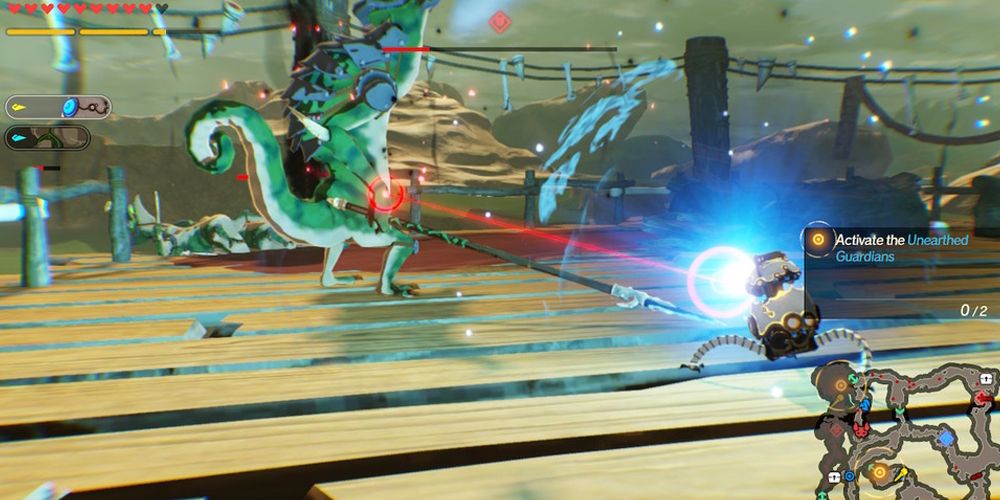 Terrako is a bit of a weird character and plays more like the Guardian Scout enemies than anything else. Terrako is also very fast, being able to fly around the battlefield both in and out of combat fairly easily. Although Terrako is not quite as efficient as the likes of Riju or Teba in this area, it has the advantage of being easier to handle.

The main reason that Terrako stands out among other characters, however, is its unique action. This allows Terrako to fire a guardian laser during combat, which can also be combined with several of its strong attack combos for increased damage output. 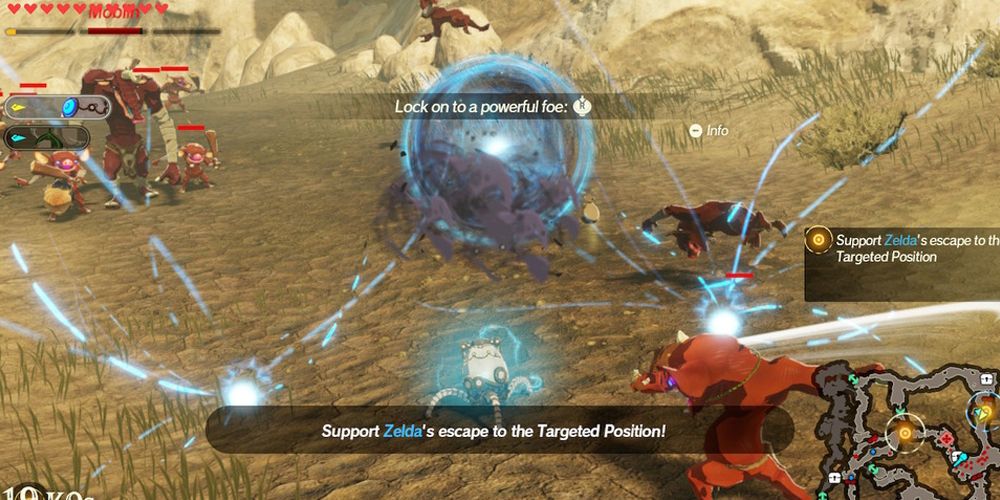 When standing still, Terrako’s strong attack will summon two floating balls on either side of the character that will also fire guardian lasers when the unique action is performed. While this adds some width to the laser attacks, it is also offset by making them considerably slower than normal, as standard lasers can be fired about as fast as you can press the ZR button.

While in motion, the strong attack will perform a basic dashing attack that is good for closing the distance between Terrako and the enemy, but not much else. 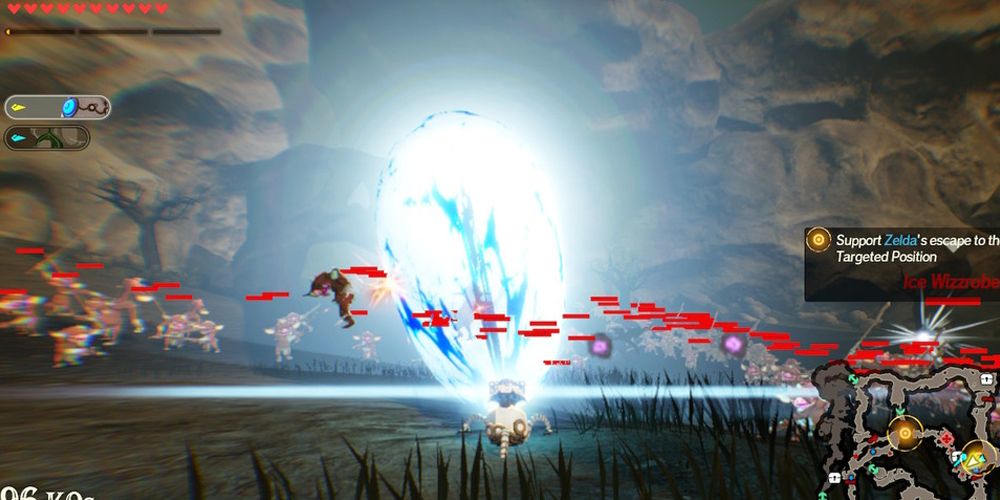 Despite being the smallest character in the game and a tiny guardian, Terrako packs a real punch in its special attack. When activated, Terrako will fire a laser that looks like it should come from one of the Divine Beasts rather than a guardian. It can hit enemies from quite a long-distance away.

Unfortunately, this Divine Beast laser isn’t quite as wide as other special attacks and won’t hit everything in front of Terrako. As it has about the same width as Link’s two-handed special attack, it’s best used on single target bosses or mini-bosses. 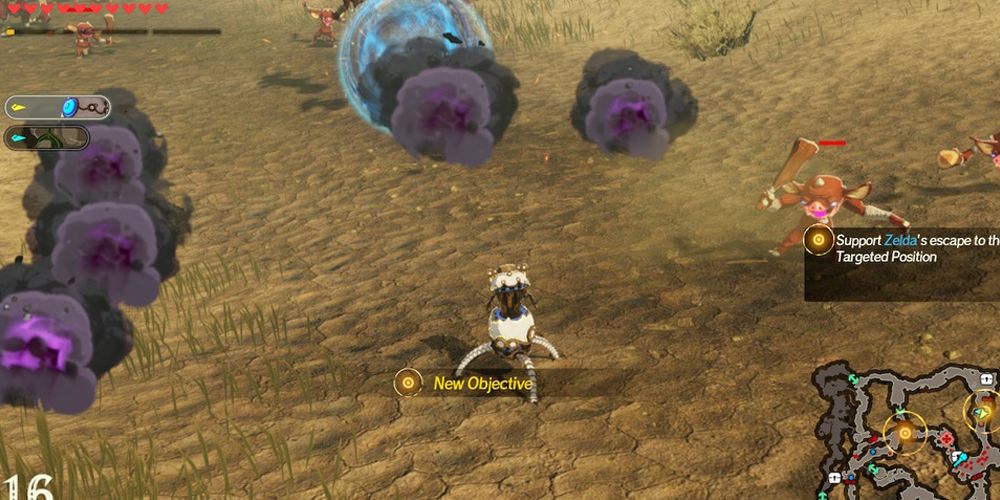 Terrako’s movement isn’t the only quick thing about the little egg guardian, as its basic combo string can be started and finished within a few seconds. Not only is it a fairly fast basic combo string, but it also provides enough forward momentum and lateral movement to ensure that Terrako is always on the offensive when attacking.

Terrako’s damage output is further enhanced when its guardian laser attacks are added into the mix. The only downside to using lasers in the middle of a basic string is that it feels a little button-mashy at first, but with some practice, it will begin to feel more natural in the flow of combat. 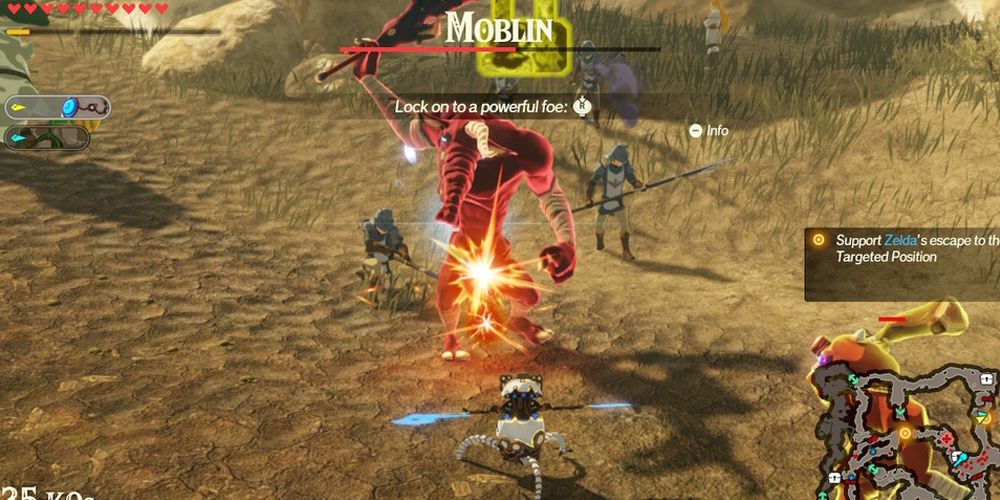 There are some fairly odd strong attack combos in Terrako’s arsenal. For example, its first combo, which is normally either a launcher or a single target focused attack, is a small AOE laser attack instead. One of Terrako’s best field clearers is its third combo, which will summon a ball of energy that, when shot at with its laser attack, will explode into a wide AEO attack.

Terrako also seems to take some cues from Maz Koshia, as the little guardian will do its best Beyblade impression for its second combo, though this version allows for much more control over its movement than the Monk’s. 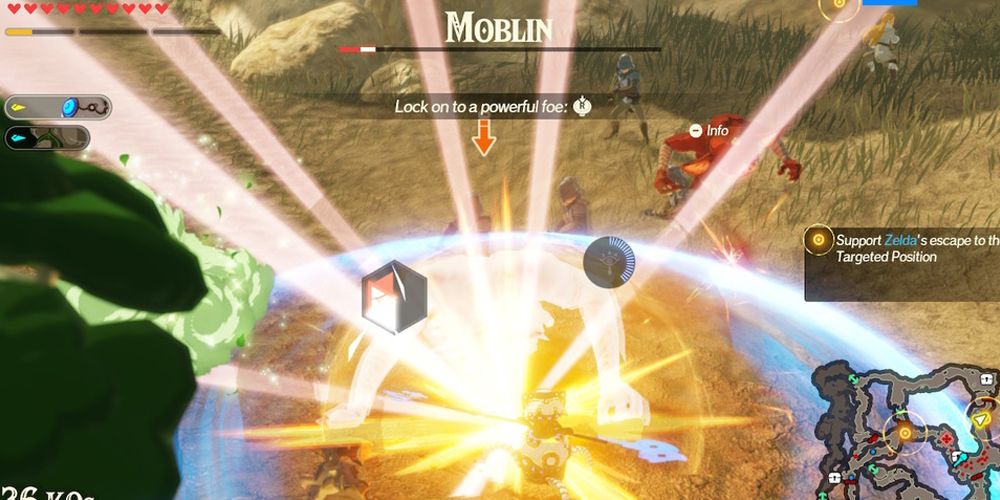 For the most part, Terrako’s best weak point draining option is its second combo combined with its laser attack. This can be executed quickly enough to deal decent damage to a weak point gauge before it disappears.

Terrako’s fifth combo will also stun larger enemies and bring their weak point gauge up for a follow-up combo, though this takes quite a while for the animation to play out in full. The third combo can also deal decent damage to weak points, but only if the summoned energy ball is destroyed with Terrako’s laser attack. 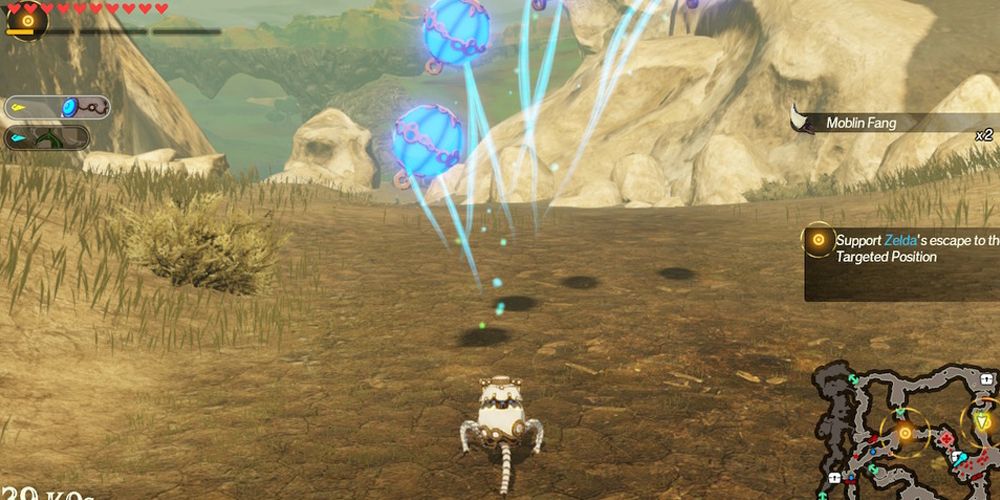 Terrako actually has some interesting Sheikah Runes that aren’t half bad, such as the Cryonis Rune summoning a large cage made of ice rather than a simple block in front of it. In particular, this helps in catching charging Lynels, who don’t leave a large window of opportunity to use Cryonis when prompted.

Terrako’s Bomb Rune is also similar to Mipha’s, as multiple bombs are spread out over a wide area. This makes for a good and quick way to clear strongholds of weak Bokoblins. The Magnesis Rune, while not as good as Zelda’s, still has some use as it will draw in all metallic objects around it similar to Link’s, though without the reduction in movement speed. Stasis is fairly generic with Terrako, though it can be dodge-canceled to allow for a higher damage output like most other characters. 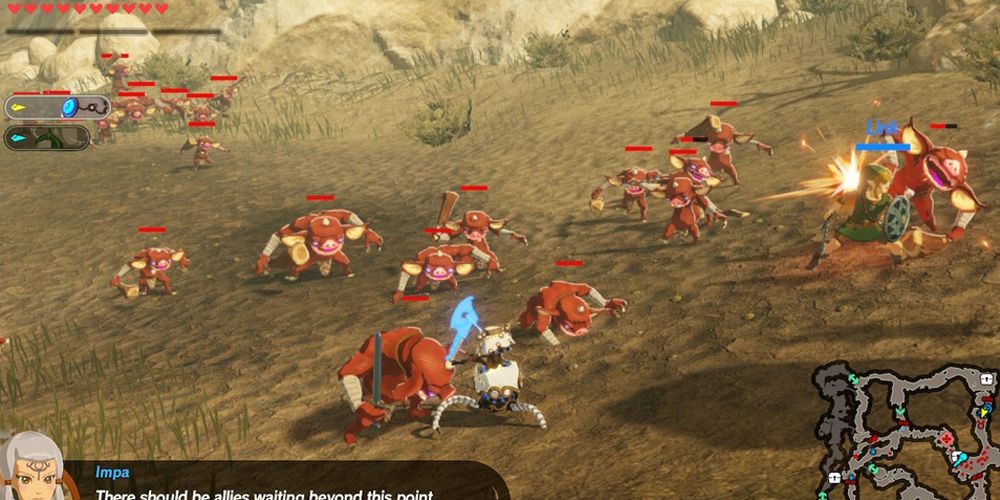 For such a tiny and nimble character, it would seem, at first glance, that Terrako should try and capitalize on its tiny hitbox and fast movement speed to get in as many Flurry Rushes as possible. However, Terrrako has an added bonus with its block mechanic, as it can fire guardian lasers with no issue while blocking. This makes it the only character who can attack while blocking.

While this isn’t nearly as useful as it could be, it does allow you to defend from Bokoblins and Moblins while simultaneously whittling down the enemies so they don’t interrupt larger attack strings. 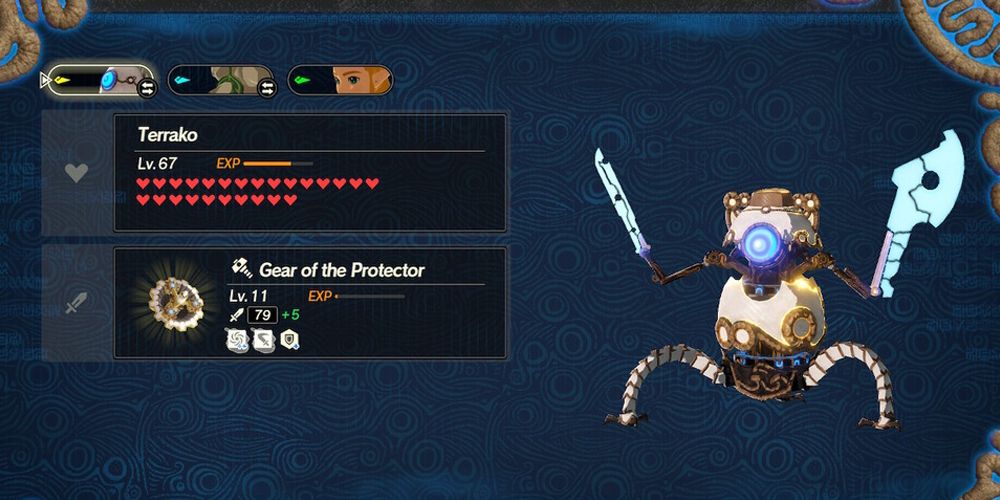 Between Terrako’s basic and strong attack combo strings, as well as its already fast attack speed, it can use just about any weapon modifier you want, depending on what kind of playstyle you like to use.

Attack Speed and Normal Attack damage are always good choices, but Terrako can also make good use of the Midair Attack Damage and Damage to Midair enemies, as many of its combos will either launch enemies into the air or launch itself into the air. 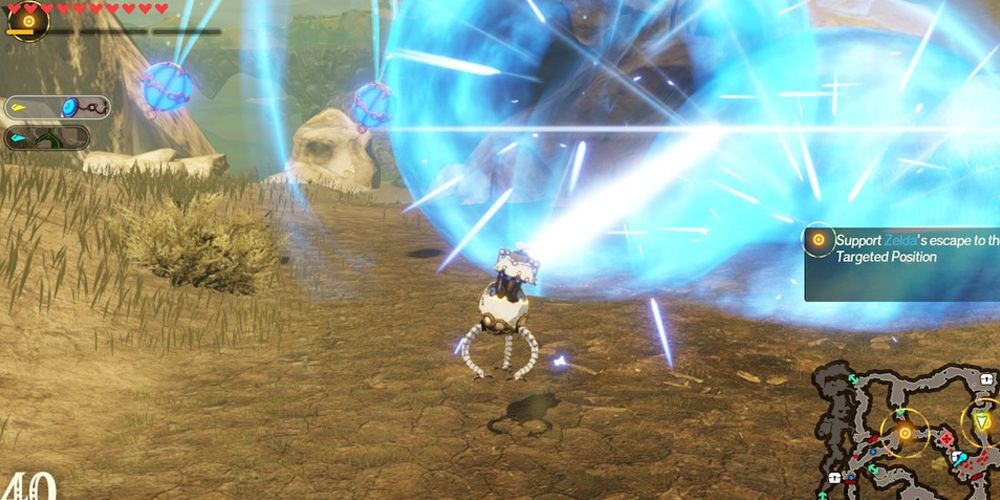 When using Terrako’s unique action, there are several things to take into consideration. While having a similar charge mechanic to Teba’s arrows, though with a much less devastating effect at full charge, Terrako’s lasers are much more dynamic and charge to full strength quicker.

When upgraded, the fully charged laser will act like a weaker version of a guardian laser rather than a smaller, single-shot attack. It is useful for quickly sweeping through enemies, not unlike Skull Kid’s second combo or Volga’s third combo in the original Hyrule Warriors. In general, mashing ZR alongside Y during a basic combo string is a good way of dealing a little extra damage to hordes of Bokoblins or Lizalfos, but less useful against bosses and min-bosses.

Next: Age Of Calamity: Pro Tips For Playing As Link 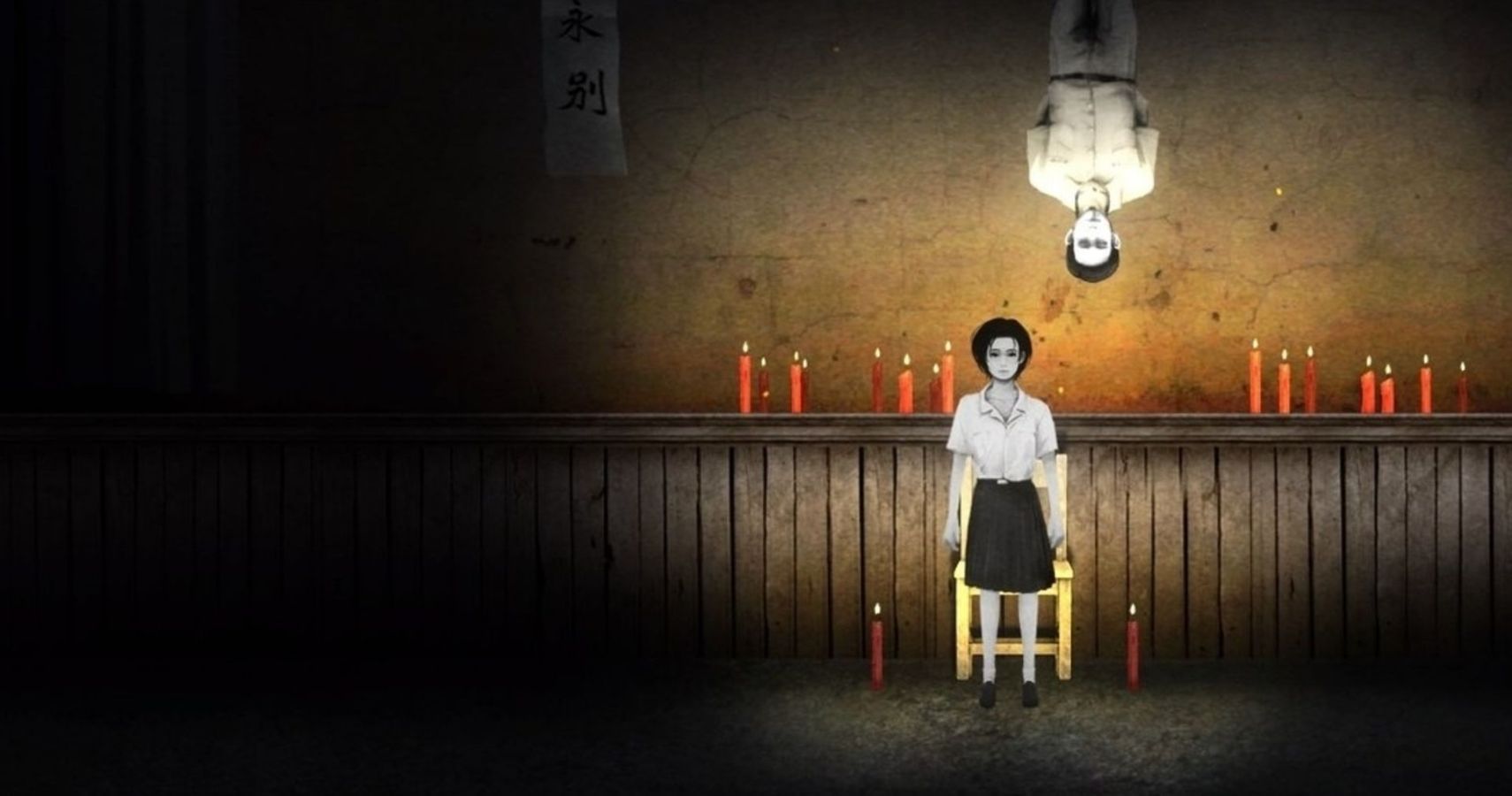