Home » News » Age of Calamity: 10 Pro Tips For Playing As The Great Fairy

Age of Calamity: 10 Pro Tips For Playing As The Great Fairy

Like Link’s Great Fairy weapon in the original Hyrule Warriors, the Great Fairies make for an enormous character, easily towering over every other playable character in the game, even giving larger enemies like the Hinox and Talus a run for their money. But that doesn’t mean they’re one of the better characters to use as they have a handful of issues that can really drag them down. 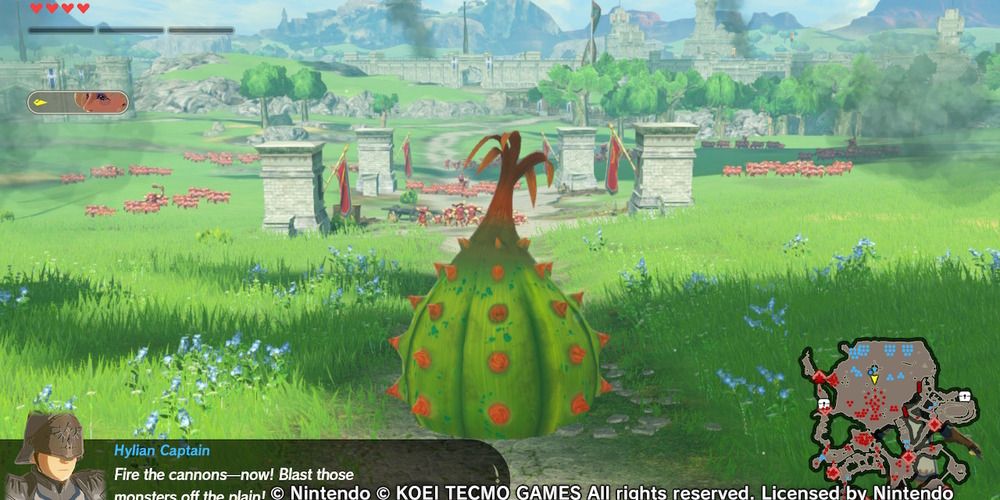 Due to the Great Fairies’ large size and hitbox, as well as their wide-sweeping attacks that can suck in enemies from much further away than they can hit you, the Great Fairies are best used in open plain levels where there’s room to move, as any corridors can result in some seriously wonky camera angles. The Great Fairies are a little slow, but their attacks are quite powerful and have a longer reach than most other characters, with the exception of Revali, though they can struggle in one-on-one battles due to their size. 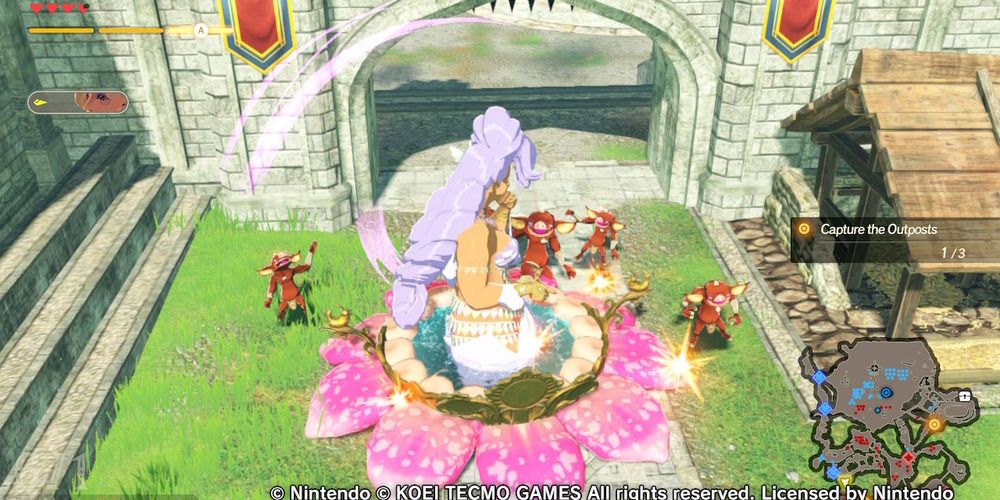 Unfortunately, the Great Fairies have one of the worst strong attacks in Age of Calamity, as they simply do a short shoulder shove straight ahead of them. While this does give them an attack that doesn’t sweep in front of them and isn’t also a part of their strong attack combos, the short distance it moves them, as well as the narrow band in which it hits enemies, means that it isn’t particularly useful, as her first combo is much better at attacking in a straight line and can deal damage from significantly further away. 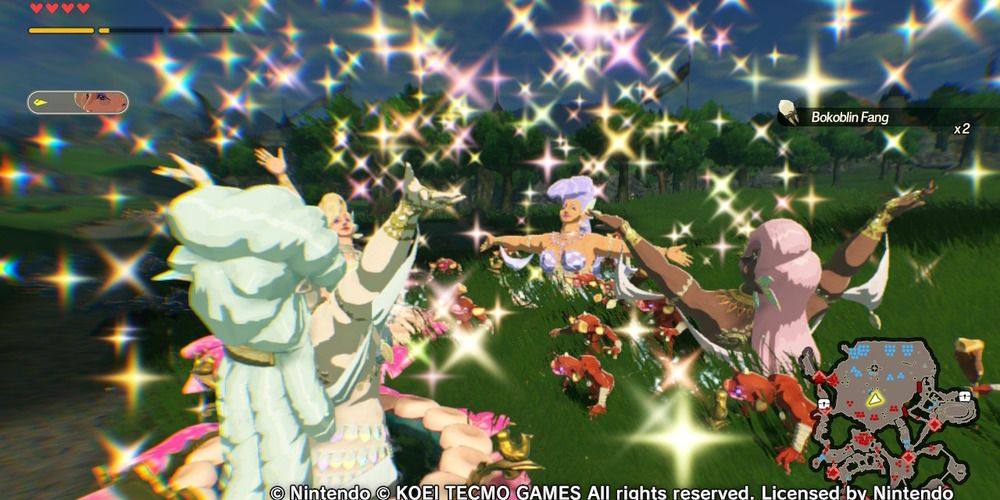 Unlike the rest of the Great Fairies attacks, their special attack isn’t a wide area of effect attack. Instead, the four Great Fairies will surround the target on all sides before blowing exploding kisses to whoever is unfortunate enough to be caught in their trap.

This is one of the Great Fairies’ best single-target attacks, which also has the benefit of being able to recharge quite quickly thanks to their ridiculous range, allowing them to take out many more enemies than other characters in the same time frame. 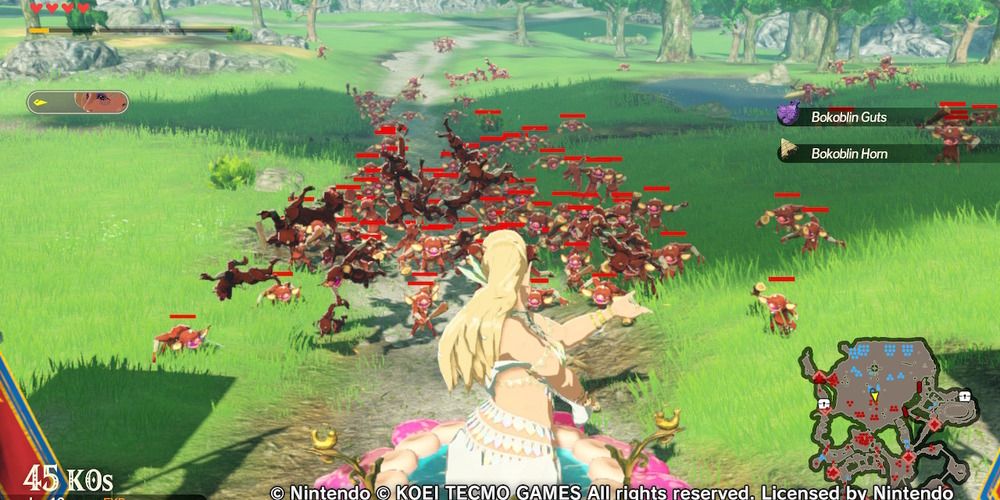 The first few attacks in the Great Fairies’ basic combo string are fairly slow, side to side motion attacks that hit in a 180-degree band around their front. The final combo, unlocked later in the game, changes things up and blows explosive kisses in front of them similarly to their first strong attack combo, but with much more ferocity. Unfortunately, these attacks are fairly useless without some serious weapon modifications, as they will kill weaker enemies long before reaching this point and are executed too slowly to deal good damage to larger enemies. 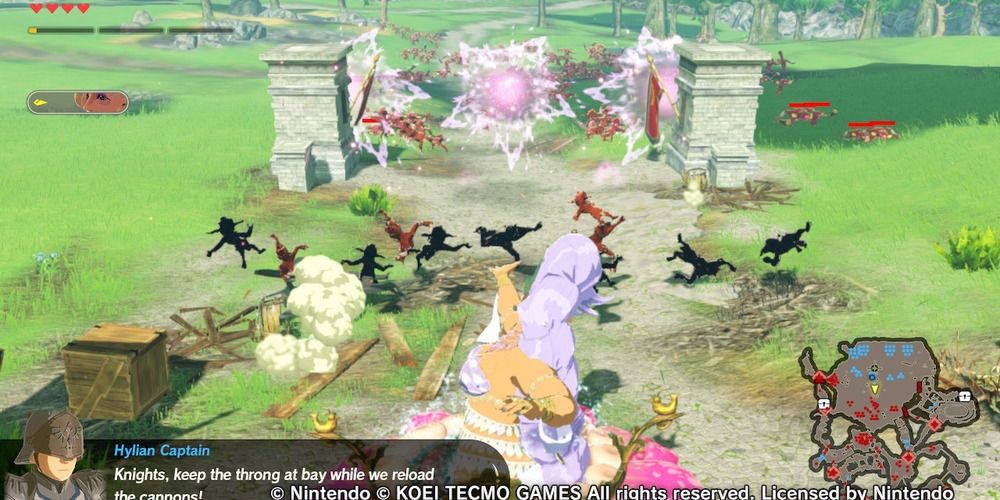 Somehow, the Great Fairies’ strong attack combos are executed even slower than the basic combo string but have the added benefit of substituting width in their attacks for massive long-range projectiles that can deal considerable damage from a very long distance. Their fourth strong attack combo is also one of the best area of effect attacks, as it vacuums in all enemies around them before subjecting them to the horrors inside their flower bud for massive damage, though this doesn’t work on larger enemies. 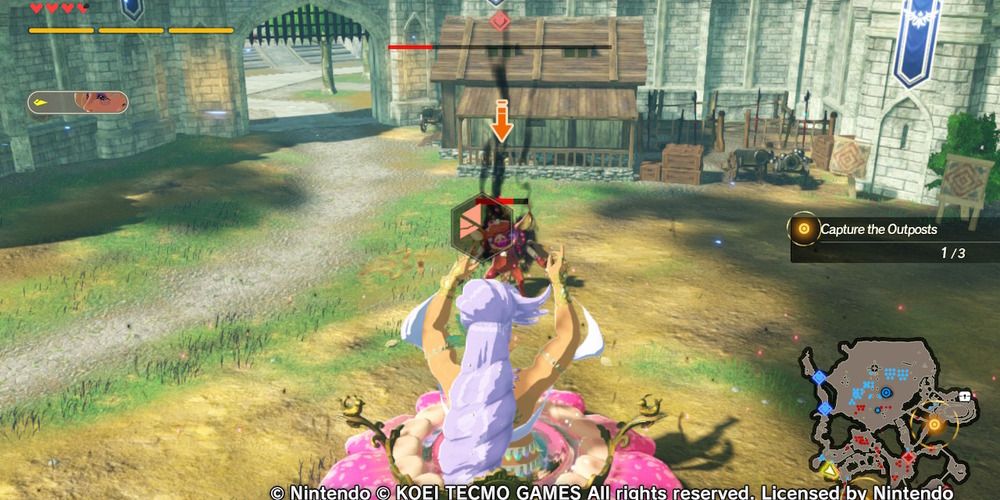 The Great Fairies really struggle with larger enemies early on, as their weapons and combos are too weak to effectively drain weak point gauges. That being said, after a few upgrades and a decent weapon, their first combo can not only drain weak point gauges quite fast, but from quite far away as well, meaning they are one of the few characters whose best weak point drainer doesn’t require them to get up close and personal. Unfortunately, none of the Great Fairies’ other combos are good alternatives, as they are simply executed too slowly and the weak point gauge will disappear before even reaching a higher damage combo.

Thankfully, The Great Fairies actually have some decent Sheikah Rune effects, all of which compliment the wide-ranged attacks quite nicely. The Bomb Runes will cause them to withdraw into their flower bud before bombarding a target with bombs, though the Rune can also be detonated early if you need to cancel out and avoid attacks.

Stasis here is less good for dealing increased damage and more useful for keeping enemies in place, as their slow attacks mean it’s easy for enemies to run around the Great Fairies to avoid getting hit. Cryonis lifts them very high in the air and puts them well out of reach of even Talus’ thrown rocks, while Magnesis is only really good when prompted like many other characters. 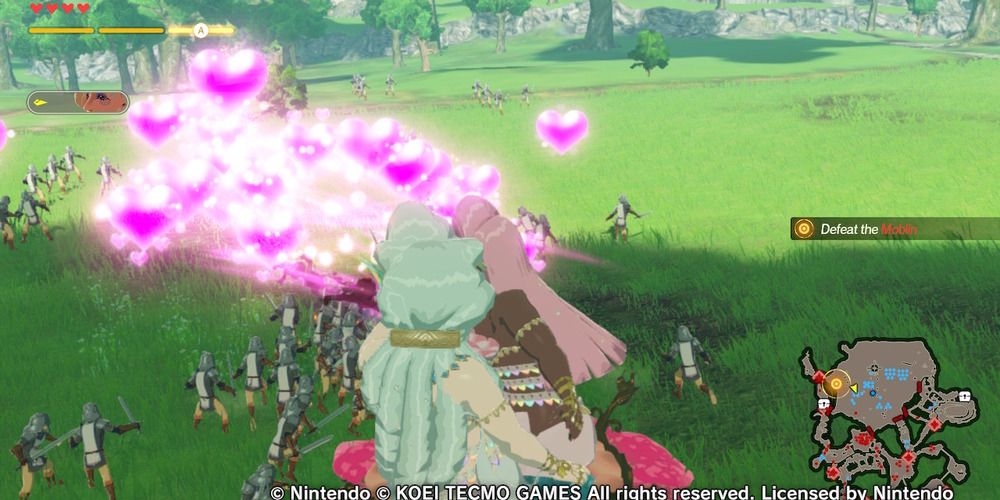 The Great Fairies’ immense size means that you’ll most likely take a lot of hits without realizing it. While dodging seems to be the better option for most characters without a shield, this isn’t the case with the Great Fairies as their hitbox is so large that even dodging doesn’t guarantee you won’t take a hit. With this in mind, it is far better to block rather than dodge, though they can still execute a Flurry Rush if you get the timing perfectly. 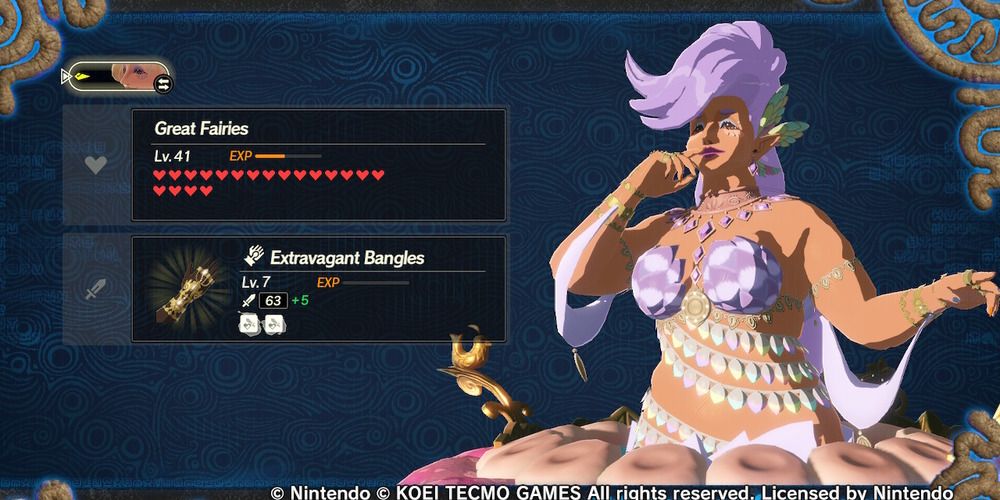 The only weapon modifier that the Great Fairies really need is Attack Speed increase, as it’s the one aspect of their character that needs improvement. Damage per 100 Kills is also useful since the Great Fairies can kill a lot of enemies very quickly, but their attacks deal enough damage that adding more isn’t overly necessary. Perfect Dodge Timing Window can also be a very beneficial modifier due to how hard it is to execute, though this can also be alleviated with practice if you really want to dodge with a giant flower fairy. 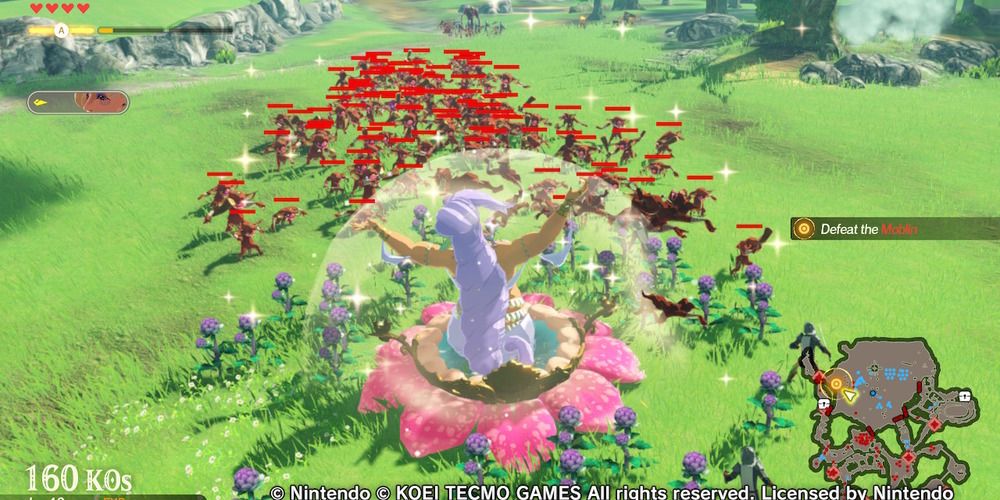 Through all of the Great Fairies’ weaknesses, their unique actions may be the only thing that keeps them from being Age of Calamity’s Tingle. As you perform attacks, the Great Fairies will switch places with one another in battle, which results in different effects based on which one is out when the unique action is performed. For the most part, they are simply different attacks, either area of effect or long-ranged, but one in particular, Mija, will summon a protective shield, not unlike Sheik’s water shield in Hyrule Warriors, that protects them from all damage and is by far the most useful unique action of the four.

Next: Age Of Calamity: Pro Tips For Playing As Impa 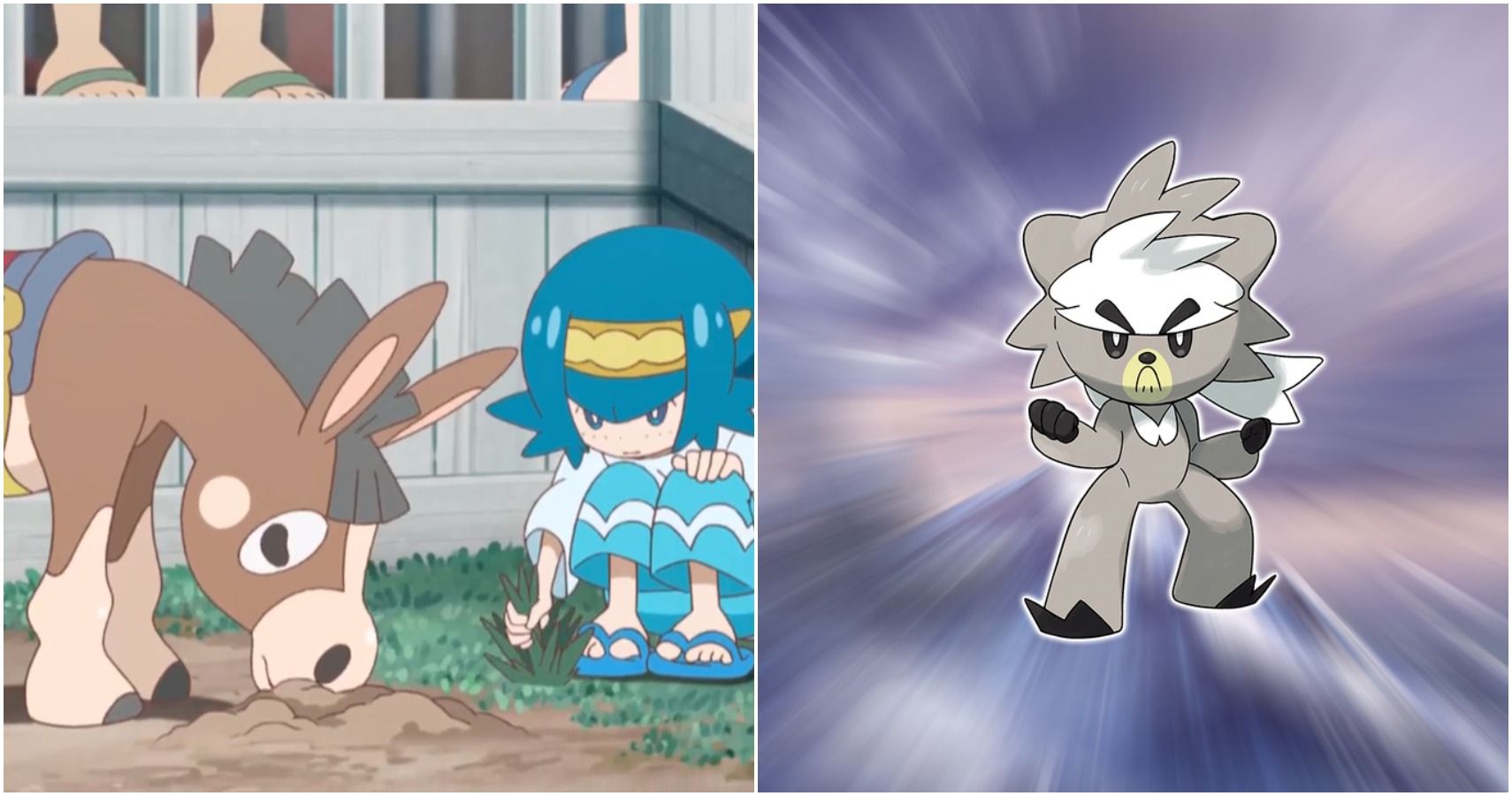