10 Unexpected But Constant Annoyances In Cyberpunk 2077

But, the focus today isn’t on all the bugs, it’s on the cut/missing features that cause players to get irritated in ways they didn’t expect. Well, for the most part, a few of these are byproducts of the buggy-ness, but there’s no avoiding it.

10 Not Being Able To Craft Multiple Things At Once 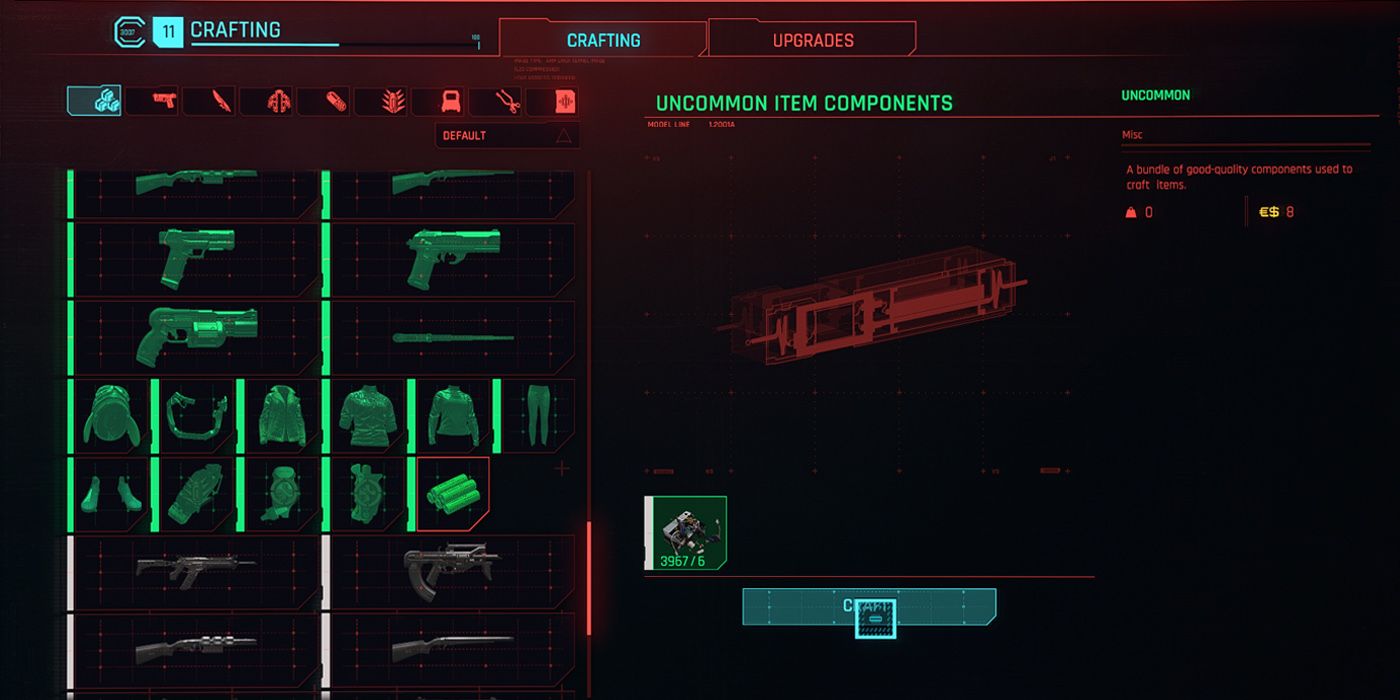 To put it simply, players can’t craft multiple items at once! Not healing items, not grenades, not clothing/weapon mods, none of them. Every single item component has to be crafted individually, and when it costs 6 common components to make an uncommon, which then takes 6 uncommon to make 1 epic component, the number of times the player has to just sit there and click craft over and over to make 1 legendary part is mind-numbingly long.

9 No Dynamic Zoom On Minimap For Driving 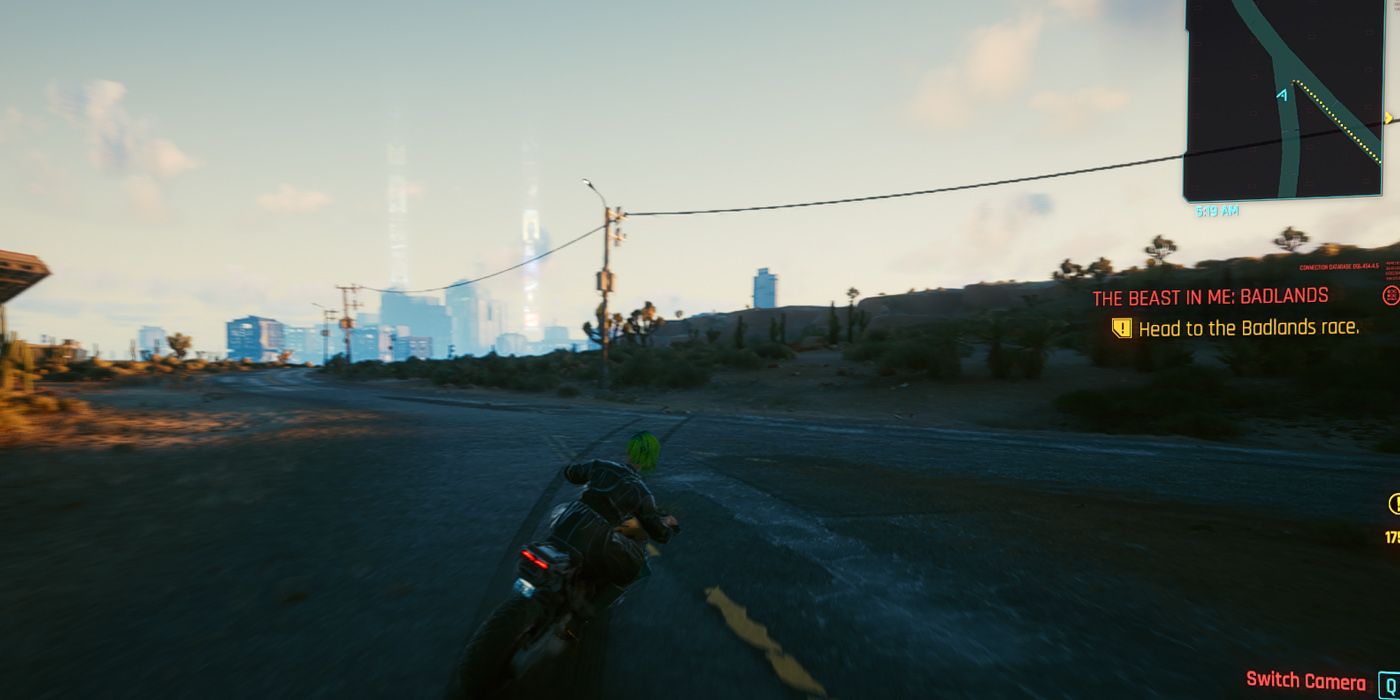 Players who are usually quite good at driving in video games are, oddly enough, spinning out all over the place in Cyberpunk. There’s actually a couple of reasons for this. For one, Cyberpunks vehicle controls are a bit awkward and weighty, plus the handbrake either overcorrects or undercorrects for a turn depending on the vehicle. But, the second factor is more subtle and simple, there’s no dynamic zoom or even manual zoom for the minimap. Cyberpunk’s minimap just simply doesn’t give players enough time to get ready for a turn. 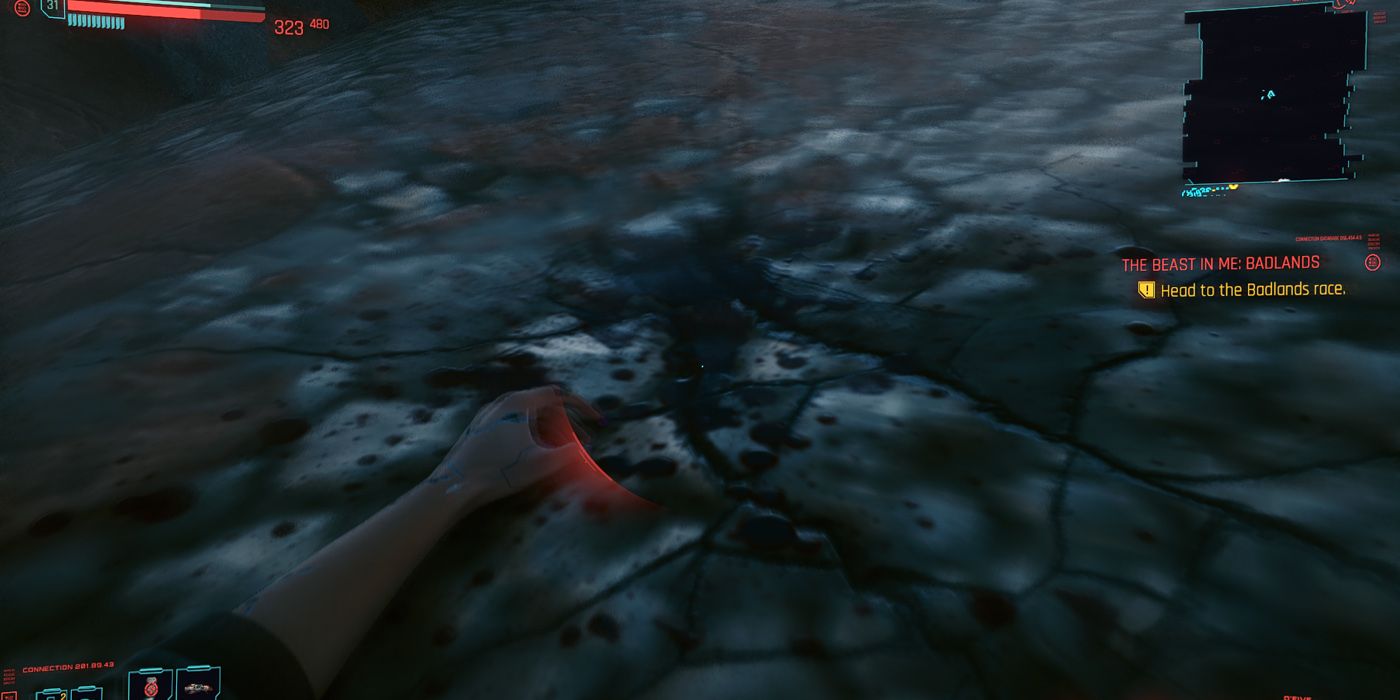 V is constantly platforming around Night City, and if they fall too far, they can lose a chunk of health or even die. Now, there are workarounds to this with the Berserk Cyberware or the “Soft on Your Feet” Perk. But, for everyone else, when surviving from a high fall V has to take a few seconds to recover before players are allowed to move again. Normally, this would be fine, but because of Cyberpunk’s constant terrain-based bugs, players can often trigger this damage and animation just from sliding into barriers or hopping up on vending machines. And, when this uninterruptible stagger animation causes them to get blasted to pieces by nearby enemies, it can really get quite infuriating. 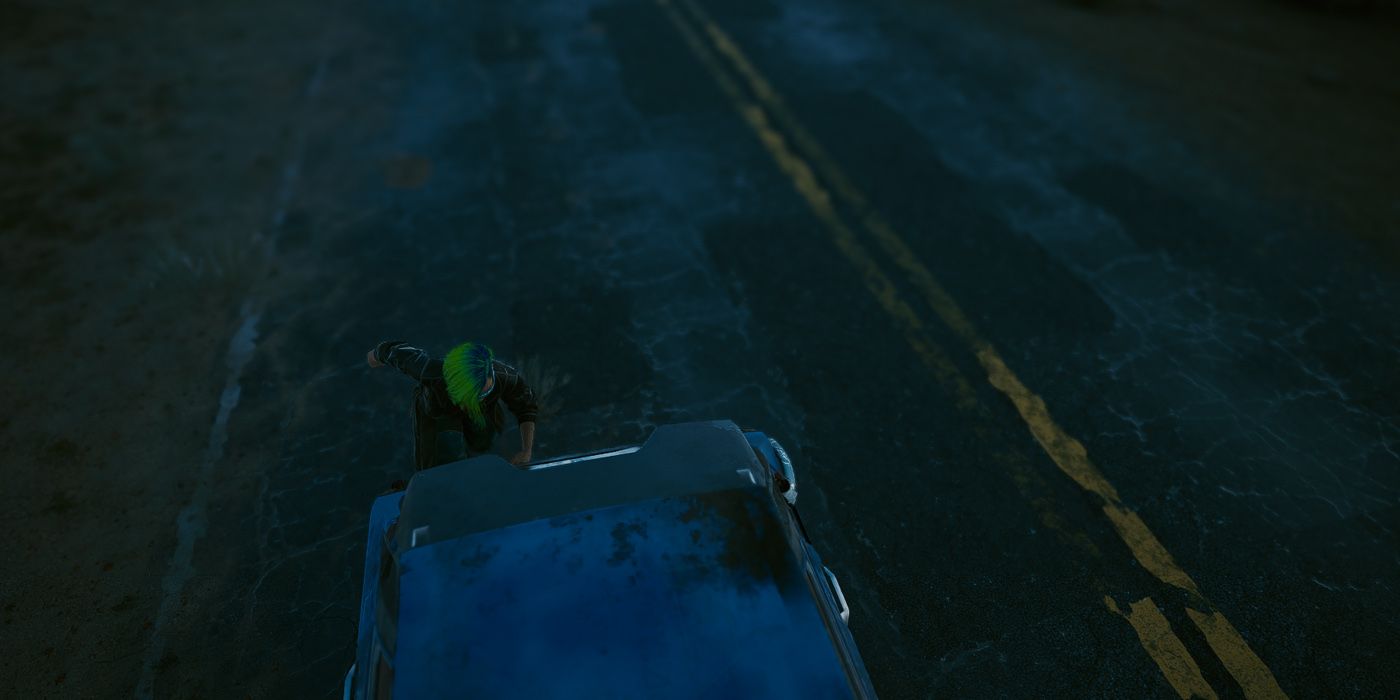 Yet another annoyance from a bug, but this one is so common it’s basically just unintentional design at this point. Normally, V’s Stash in their car and their apartment is supposed to be linked, so that anything they throw into the stash in their car can then be pulled out from their apartment stash as well. But, the majority of players are actually finding that these two stashes are separate, which again isn’t a huge deal and can sometimes be fixed by reloading the game, but it does get maddening when it happens so constantly.

Plus, it’s almost impossible to get the Stash prompt to appear when using any of the motorcycles as well.

6 No Way To Sell Worse Cyberware 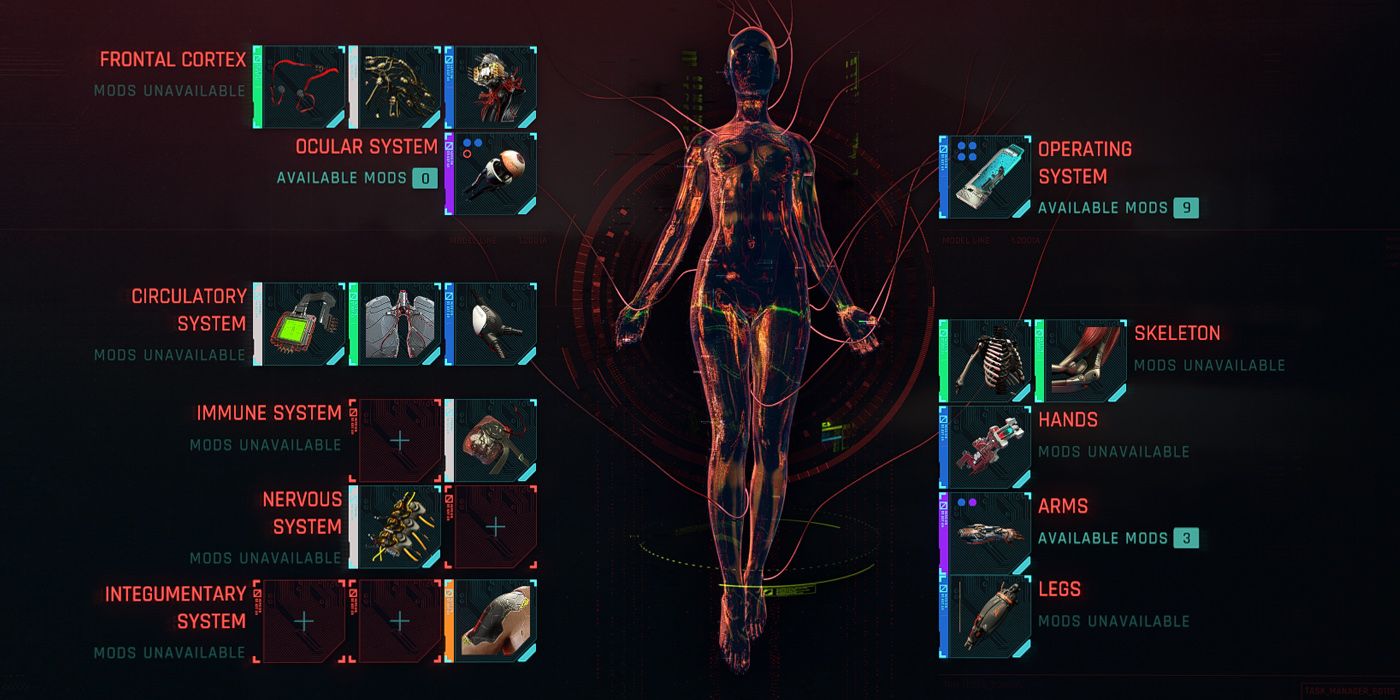 For anyone reading who is just starting or hasn’t started yet Cyberpunk 2077, here’s a much-needed tip, only spend money on the highest rarity Cyberware available. If one Ripperoc is selling an uncommon pair of Gorilla Arms but another one is selling an Epic version for twice the price, save up for the epic. Why? Because as of the recent Hotfix 1.04, there’s absolutely no way to sell old/unused Cyberware. It’s such a weird oversight and eventually leads to players building up a collection of lower rarity Cyberware they’re 100% not going to use but can’t do anything with. 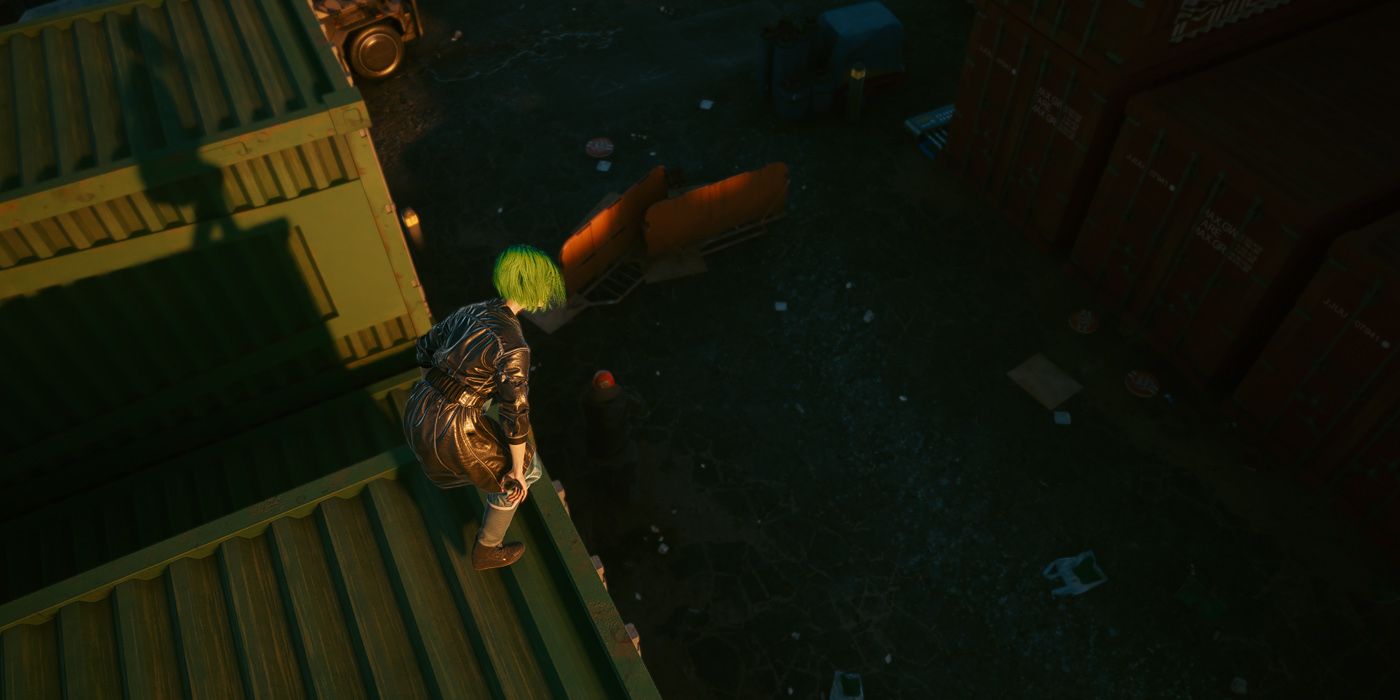 Players will quickly find quite early on in the game that enemy netrunner can hack V just like they can hack them, but it really only boils down to two types of hacks. One is the standard Overheat hack that lights V on fire and really packs a punch early on. The counter to this is always to find the Netrunner responsible before they either hack V again or before they finish the first hack. But, the second one, revealing V’s location, is pretty much unstoppable once it starts. At least from our experience, there’s no netrunner causing the hack and no line pointing to who is causing it, and not even really a “range” for it either. It’s just an odd mechanic that happens rarely yet often enough for people trying a stealth build that it becomes groan-worthy every time it happens.

4 The Lack Of Visual Customization After The Creator 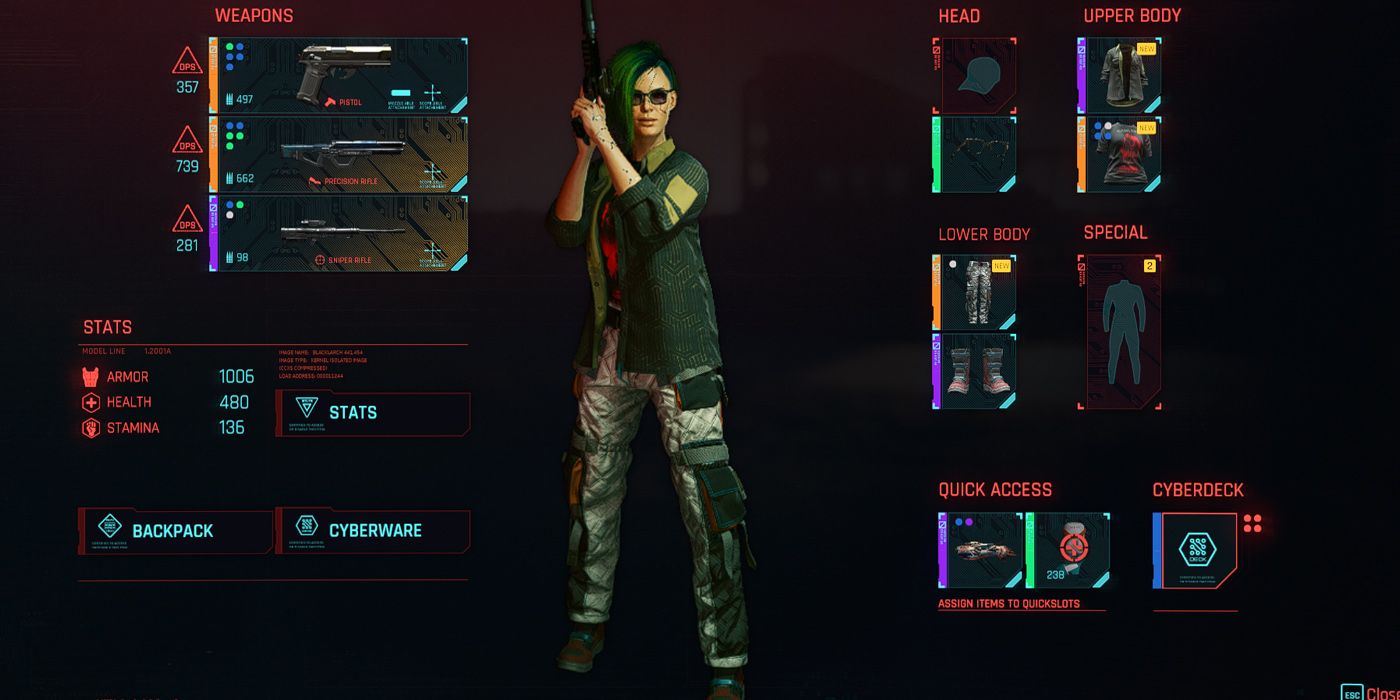 This is probably one of the most surprising aspects of Cyberpunk 2077, as so much of the emphasis early on was how customizable everyone’s version of “V” was. And, while the Character Creator is pretty in-depth (so in-depth fans are making memes with it), it’s missing a lot of the little things hinted at in different trailers such as the light-up tattoos or full cybernetic modifications similar to how the Maelstrom gang members tend to look. But, the worst part is, once that character creation is finished, that’s it! No changing hairstyles latter odd, no adding new tattoos or face modifications, even the arm replacements aren’t very different aesthetically from one another. Plus, every piece of clothing in the game has an armor value tied to it, so wearing clothes becomes more about their armor value than their aesthetics. It’s an aspect of the game many players expected would be much deeper, but find themselves constantly frustrated with how shallow it is in actuality. 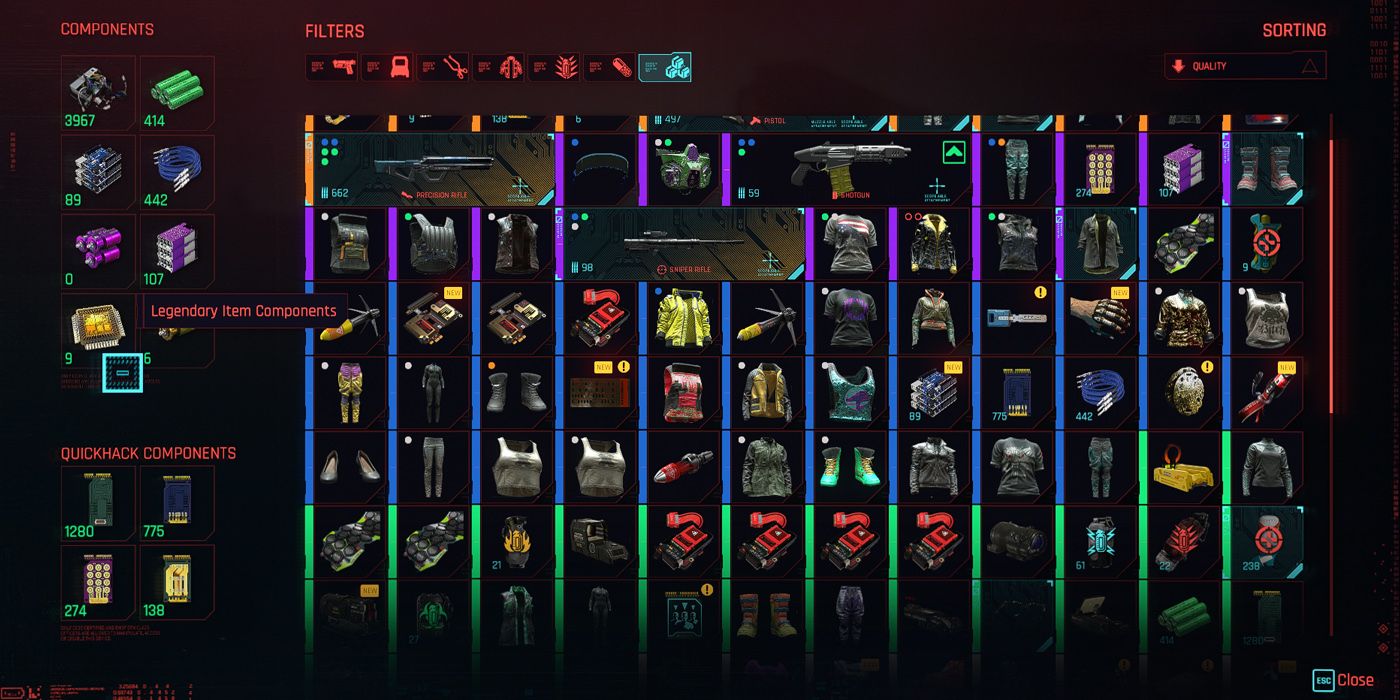 The ability to mark or lock specific items doesn’t become so intensely important until the player gets the Scrapper perk or until they accidentally disassemble an Iconic Weapon. But, once either of those things happens, it’s a whole new world. At first, Scrapper seems good since it’ll save time for the player by auto-disassembling junk items. But, there are medallions and pieces of jewelry that count as junk yet sell for a hefty price tag, way more than they sell for as Common Item Components.

And, even worse, there have been reports that the little Perk XP shards that players can pick up off of corpses in crime scenes can get eaten up by this Perk as well. This is another thing one that likely will be fixed in the next patch or two, but wow what an oversight. 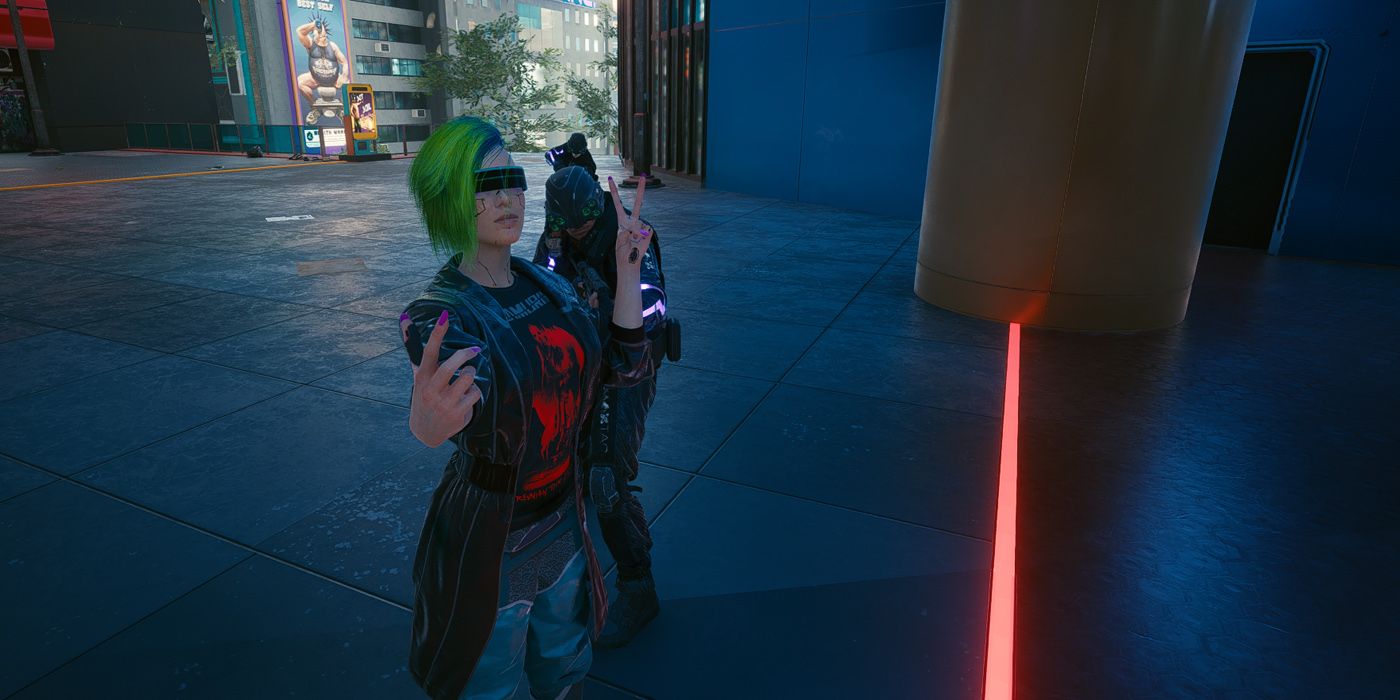 There’s no getting around it, the way the Wanted system works in Cyberpunk 2077 is laughable. Normally, it would be a bit unfair to compare this system to GTA5’s just because they both involve cops chasing the player character, but with aspects like the actual “wanted stars” that pop up when V gets in trouble, Cyberpunks couldn’t be more clearly inspired by GTA’s. That said, when cops come after the player in GTA5, they don’t just phase in behind them and start shooting, they usually spawn at least a block or two away, where the player can’t see, then they drive up and start attacking. It just feels way more realistic/natural that way. Now, people have tested Cyberpunk’s police force by shooting pedestrians while on rooftops, and the cops literally pop into existence behind V, even 10 stories in the air. 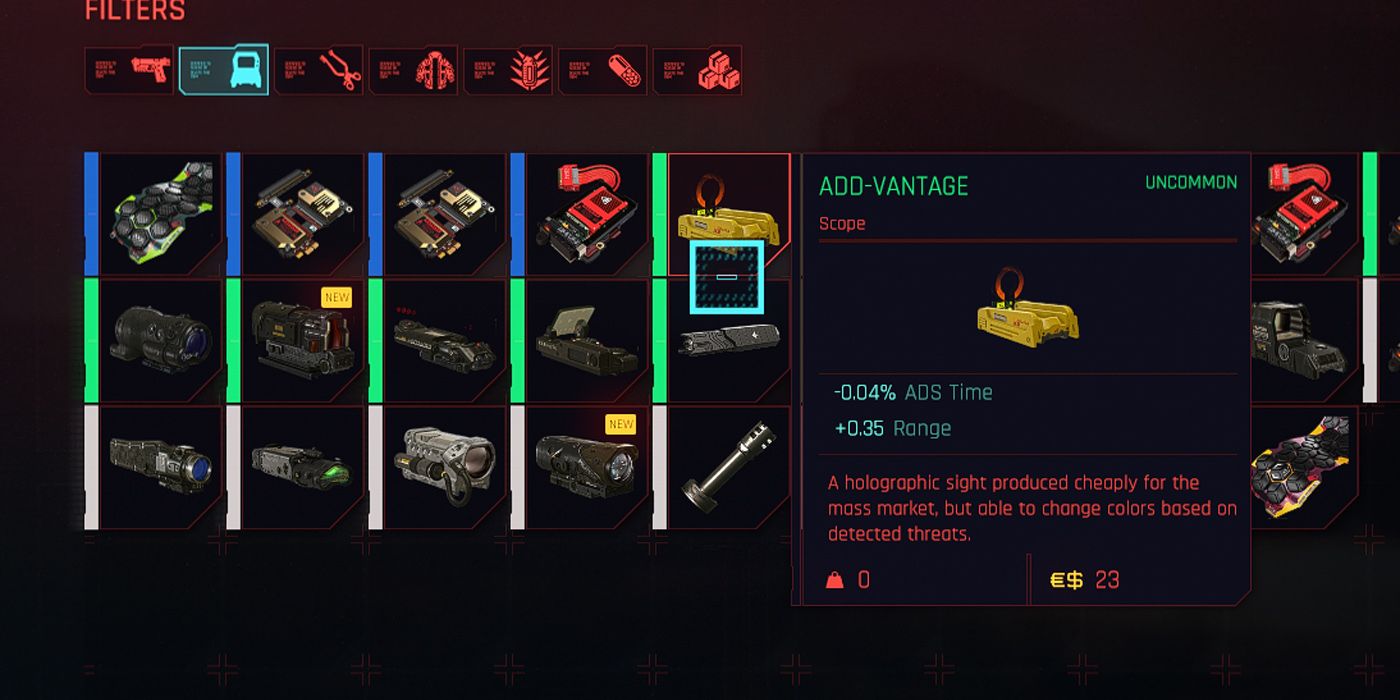 And lastly, let’s talk about Cyberpunk 2077’s UI design and how needlessly complex it is. Players have a ton of tabs in their inventory to sort everything from Weapons to Cyberware, and that’s pretty cool. But, with Cyberware mods, for example, there’s absolutely nothing in those item names/descriptions that tell the player what piece of Cyberware it’s a mod for, so the only option to find out is to go to a Ripperdoc and see what category it pops up under. Additionally, it’s an even bigger problem with weapon attachments, as there isn’t a single scope or suppresser in the game that states what type of weapons it’s applicable with.

Next: 10 Insane Glitches We Encountered While Playing Cyberpunk 2077 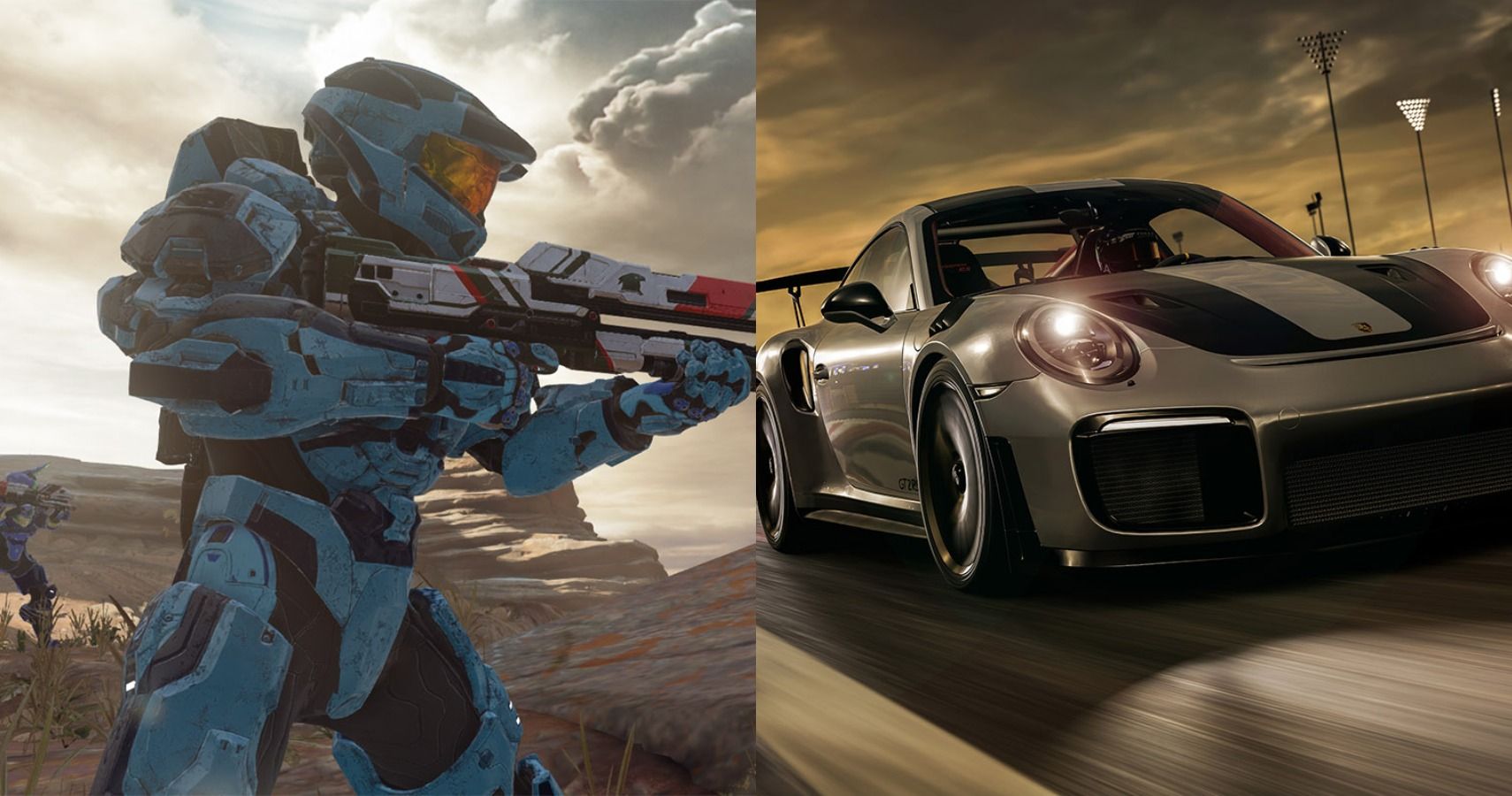