The Twisted Metal series has always been about causing as much carnage as possible whilst trying to destroy your opponents, and the weapons are suitably dynamic and outrageous in order to reflect that. Nowhere is that truer than with the special weapons (otherwise known as 'specials'), which are thematically unique to each vehicle and require their own strategy.

2012's Twisted Metal is the most extravagant in regards to the special weapons, with almost all vehicles having access to two each. Some vehicles share specials but have slight differences, and others use variants of older special weapons that have appeared in previous games. 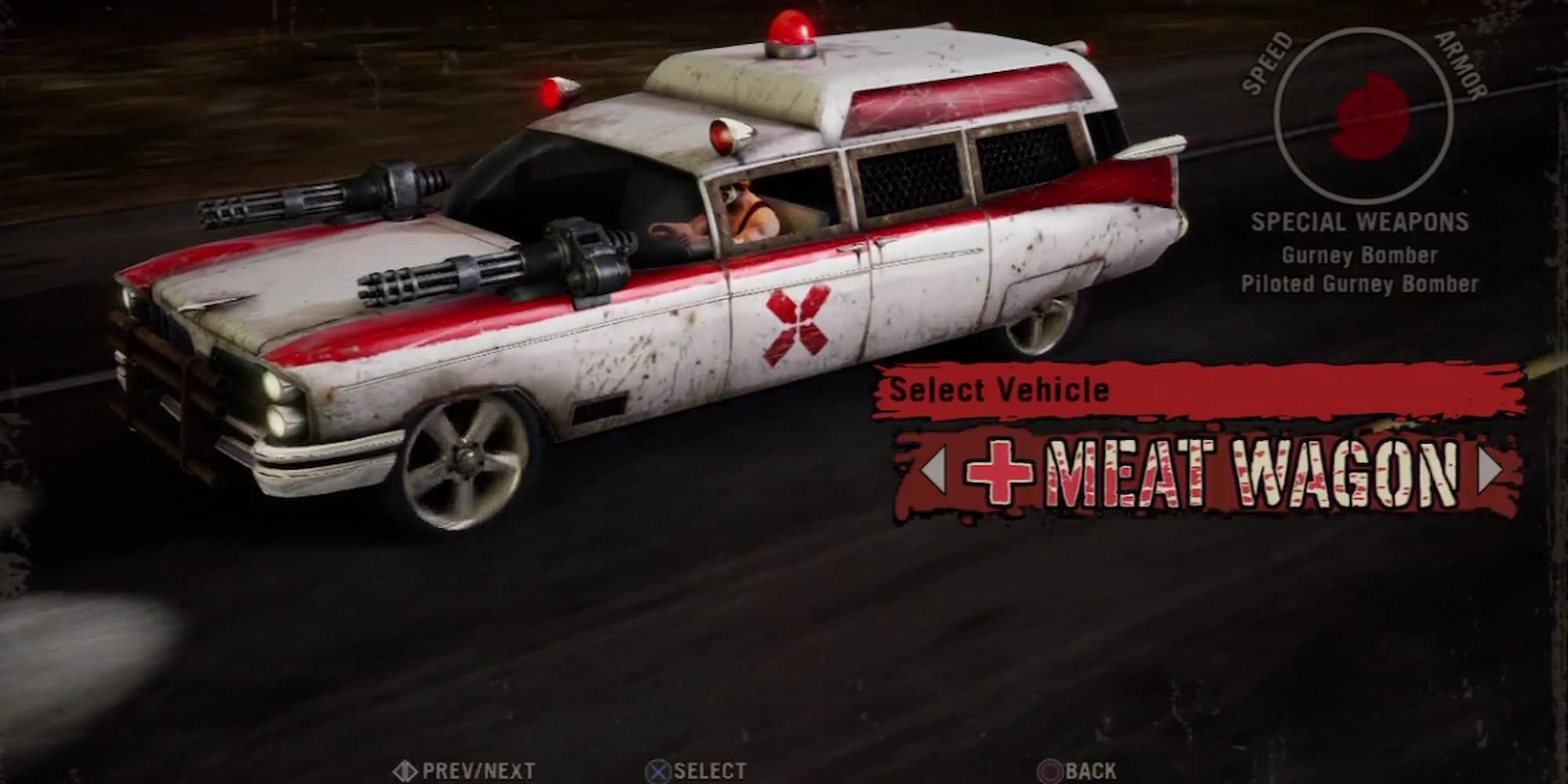 This attack fires a hospital gurney along the ground (complete with a patient attached for added hilarity), which detonates upon contact with an enemy or the environment. It can be fired both forwards and backwards, and it has slight homing capabilities too. 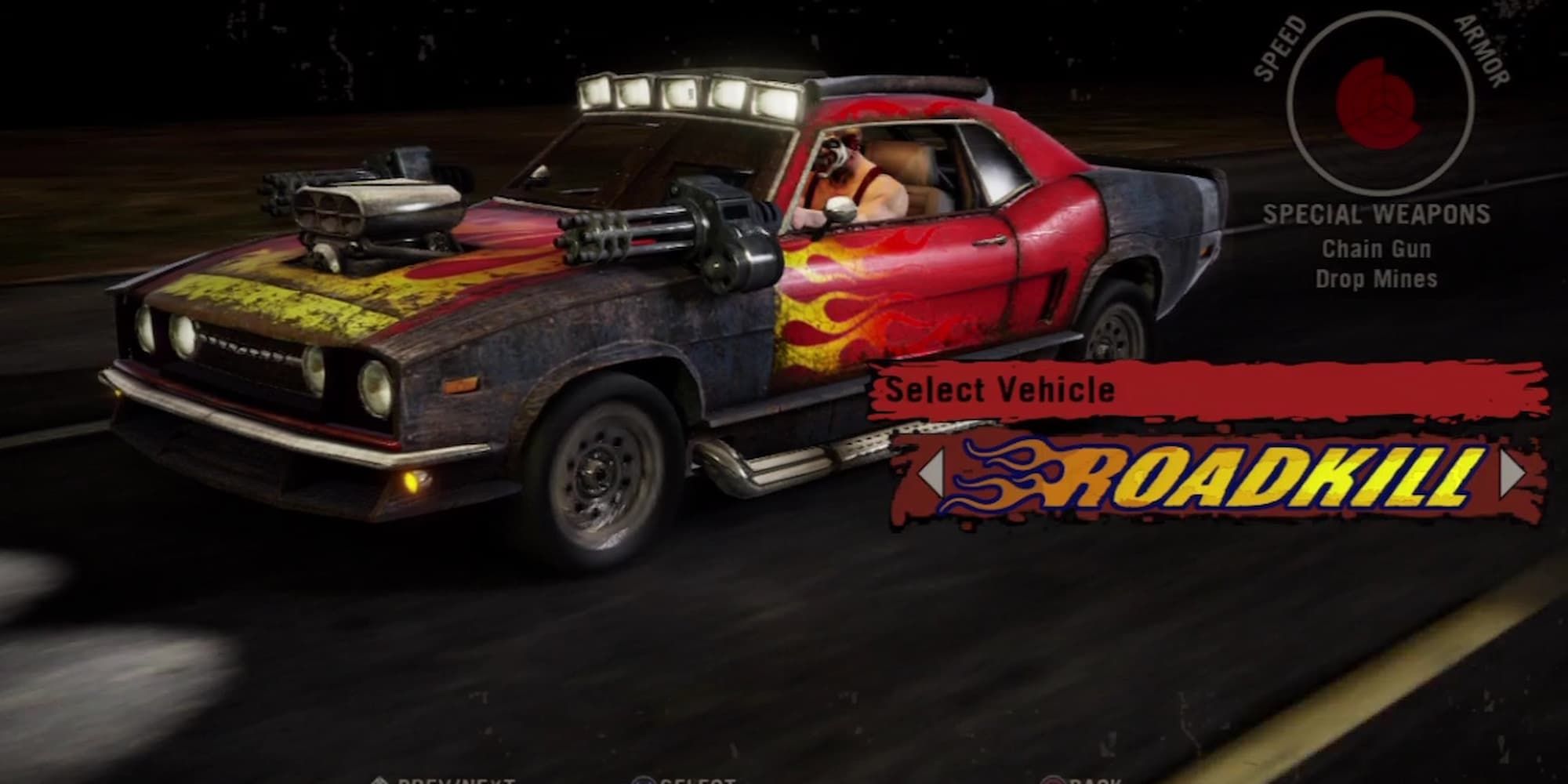 Roadkill and Death Warrant technically share the same special weapons, both regular and alternate, but Roadkill's are designed to be more powerful.

The alternate special combines Roadkill's chaingun with blood missiles, but they can be a bit of a double-edged sword. On the one hand, they're incredibly deadly if they're charged to full capacity, but like many powerful weapons in games, the charge-up time is designed to be lengthy in order to balance out the damage. 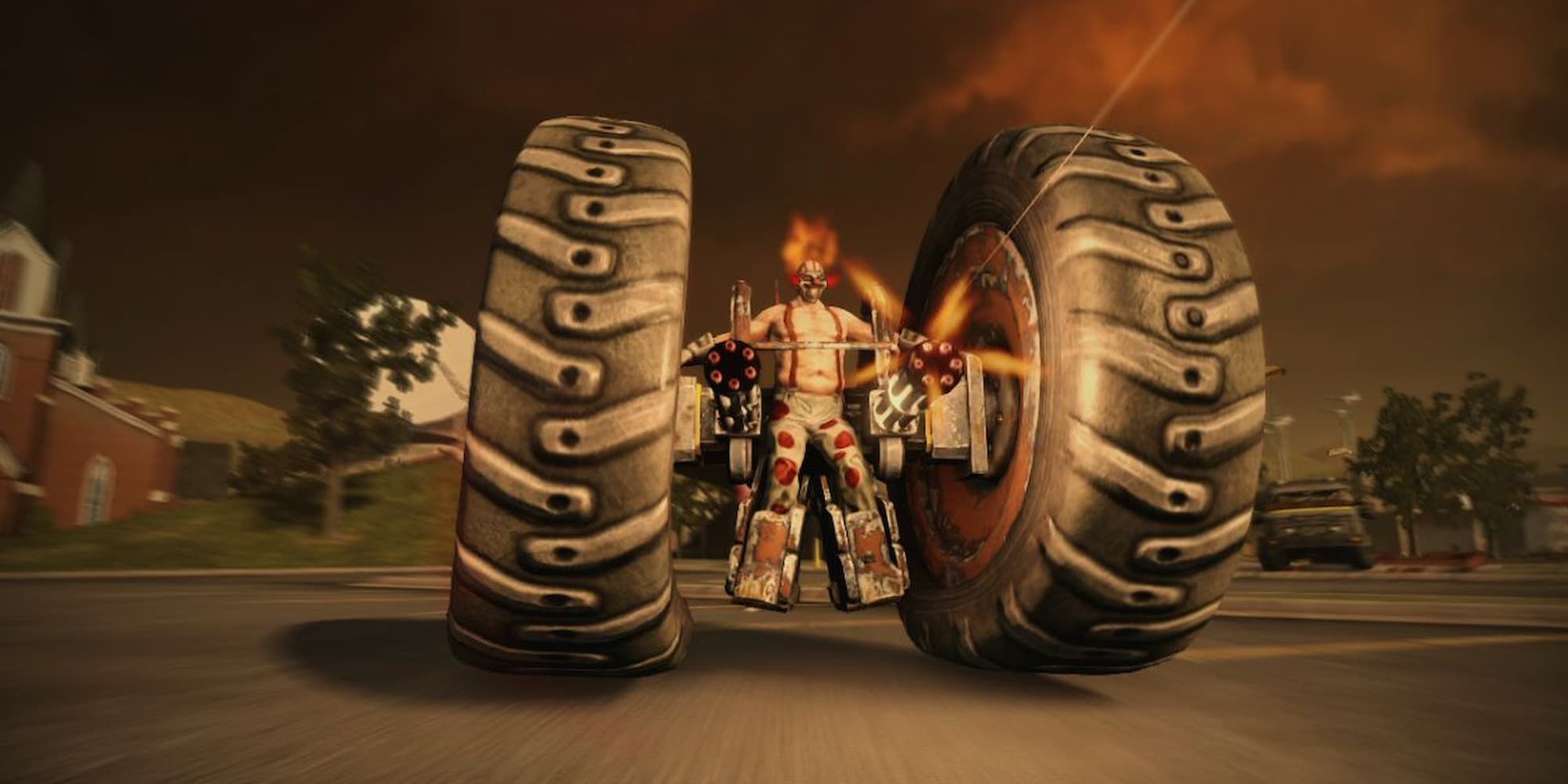 With this special, both of Axel's huge wheels will fuse together and spikes will emerge, allowing you to run over other enemy vehicles and make them take crushing damage. If you're lucky enough, you can do this up to three times before reverting back to Axel's regular form.

This special is technically available to Warthog as well, but Axel's is safer to use because Warthog lifts itself up to do the crush attack, which exposes a very venerable weak point underneath the body that allows weapons to do more damage. 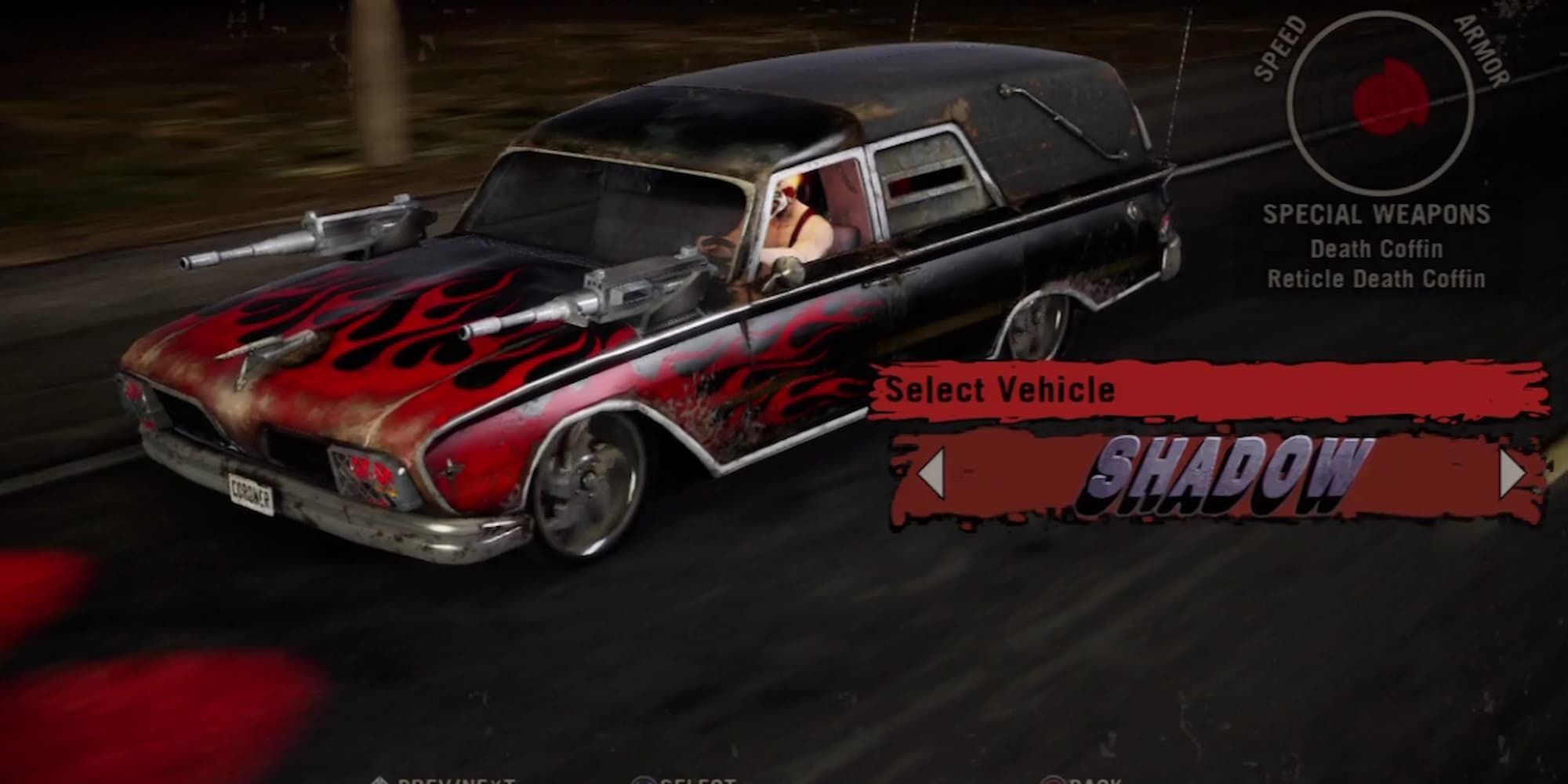 This special fires a coffin that travels along the ground and rebounds off the landscape until it hits an enemy and explodes (it can also be detonated remotely). The mini-camera also allows for easier judgment on when to detonate the coffin.

The damage it deals is pretty significant too, even outside of a direct hit. It may not be as powerful as the alternate special which launches a coffin as a bomb, but in the frantic heat of battle, the Death Coffin is more likely to hit an enemy. 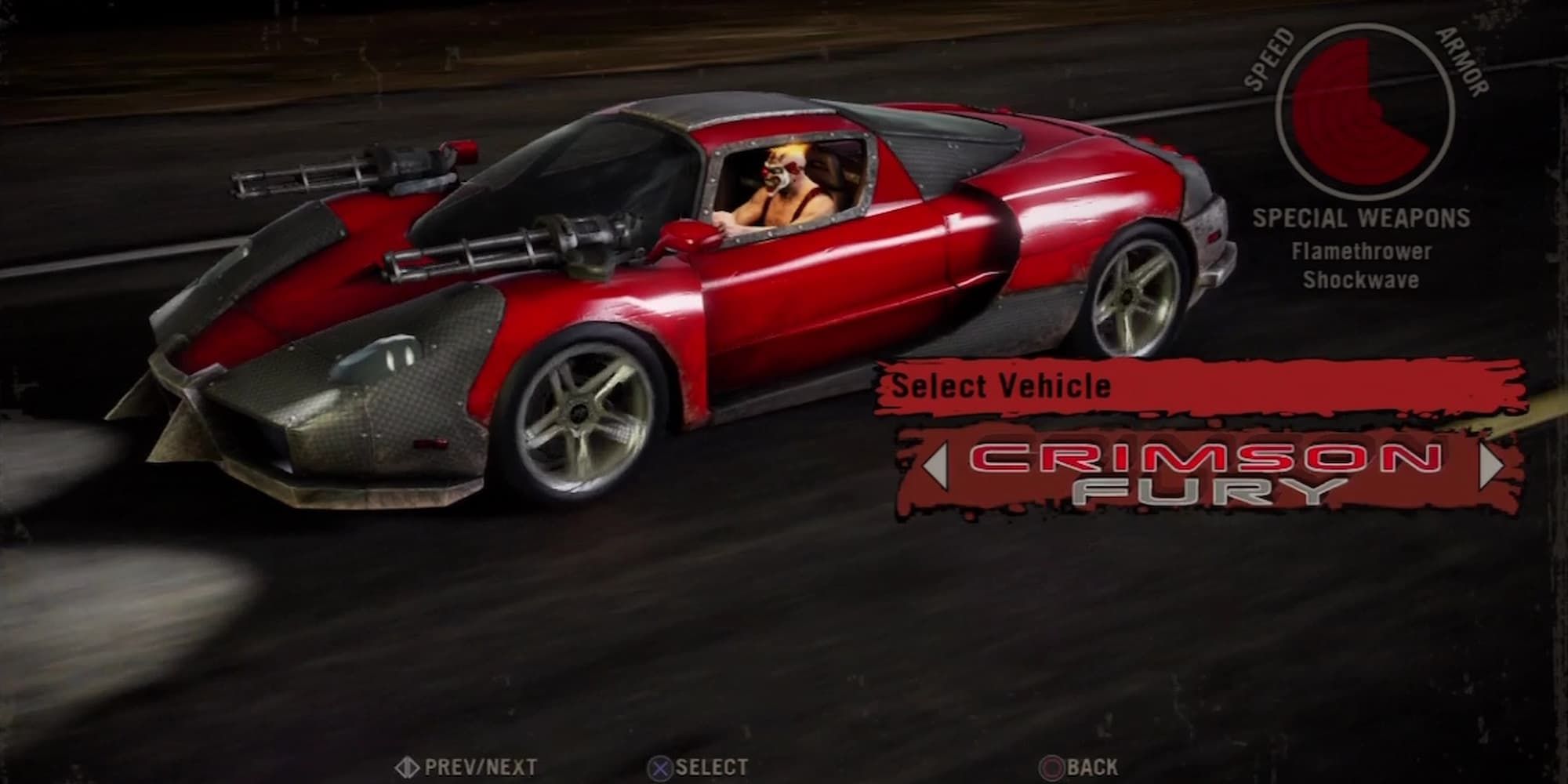 Both Crimson Fury and Kamikaze share this special, but Crimson Fury's is far more powerful to counteract the lack of armour. Crimson Fury's flamethrower also shoots fireballs during the onslaught to deal even more damage, and the fire damage sticks around for a short while after it initially strikes.

The best feature of this special weapon is that no one will be able to outrun it, since Crimson Fury is the fastest vehicle in the game by quite a wide margin. Just make sure you can handle the speed first. 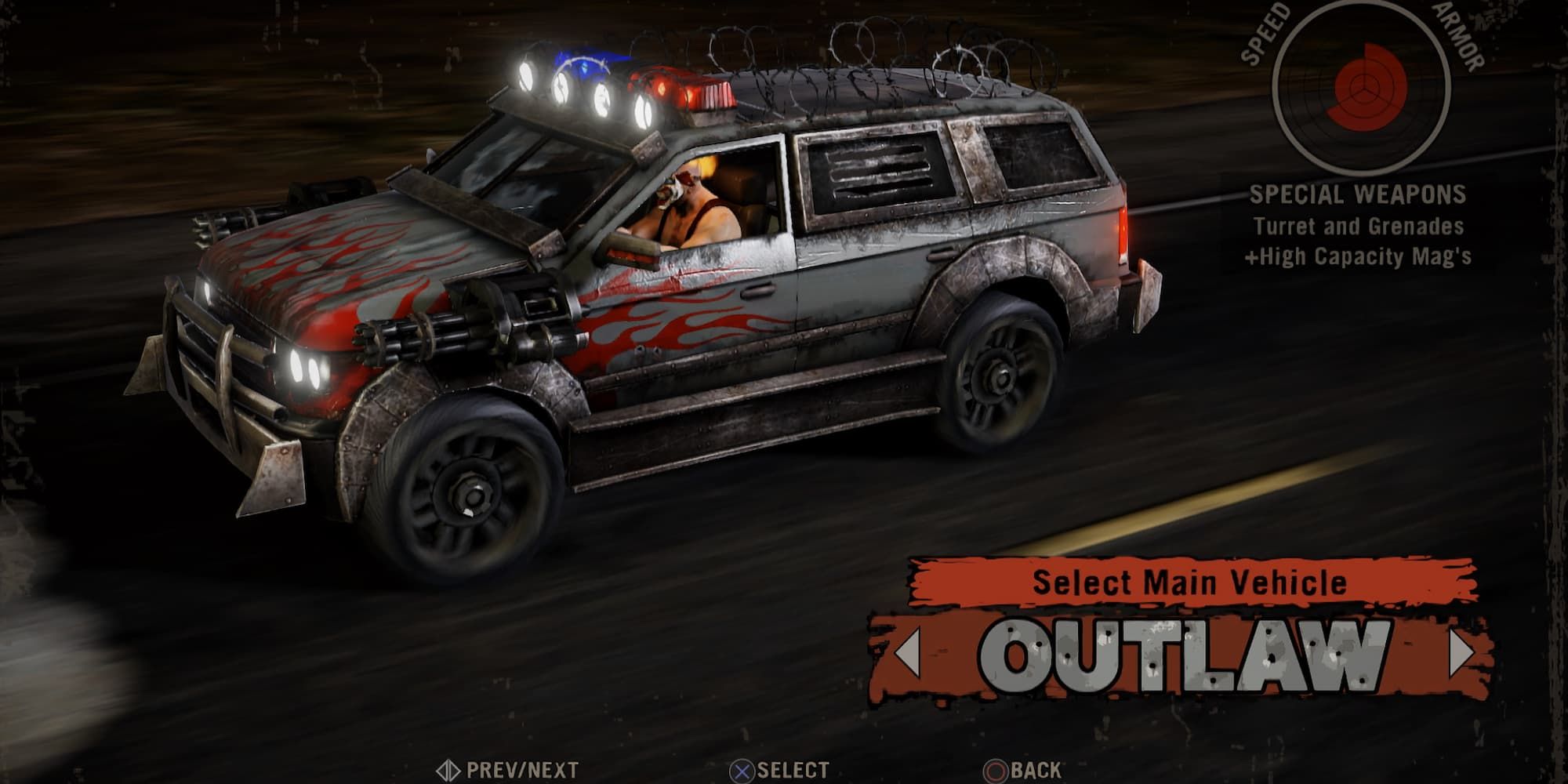 This is a particularly powerful special weapon when used appropriately. When activated, a turret on top of the vehicle will appear and start firing automatically at enemies. Repeatedly pressing the fire button will also add grenades to the bombardment.

The best feature of the turret is that it has full 360-degree coverage, so it's one of the easiest specials to use in the game whilst dealing some good damage at the same time. You'll need to get up close and personal though, as the range isn't the best. 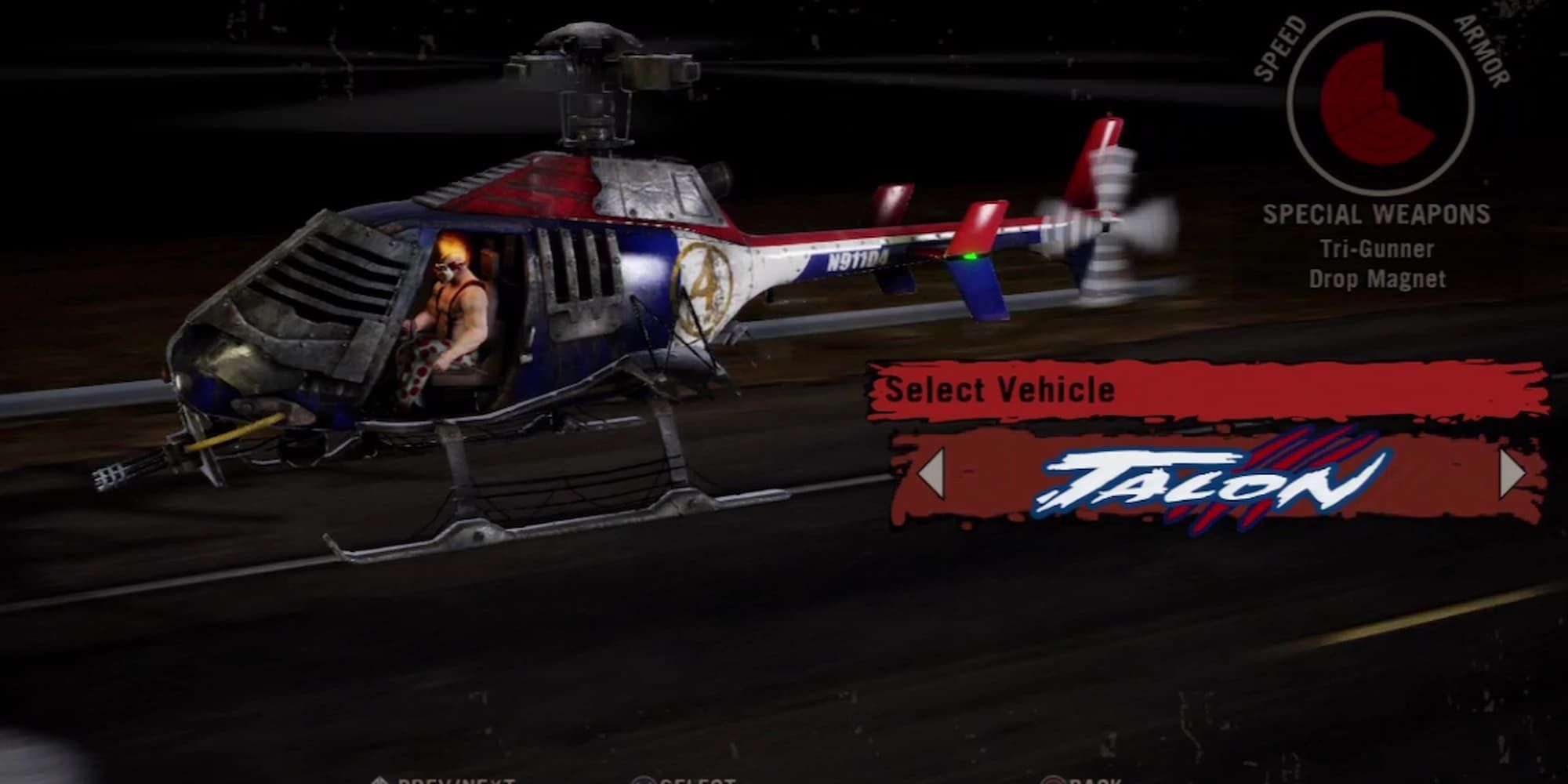 Talon is the only playable flying vehicle in the series, and its alternate special takes advantage of this. It's a magnet that can carry almost any enemy and drop them for huge fall damage.

It's possible for an enemy to break free if you don't drop them quickly enough, but this can be rectified on maps with bottomless pits because they'll take damage either way. The higher you are when you release them, the more damage they'll take upon impact. 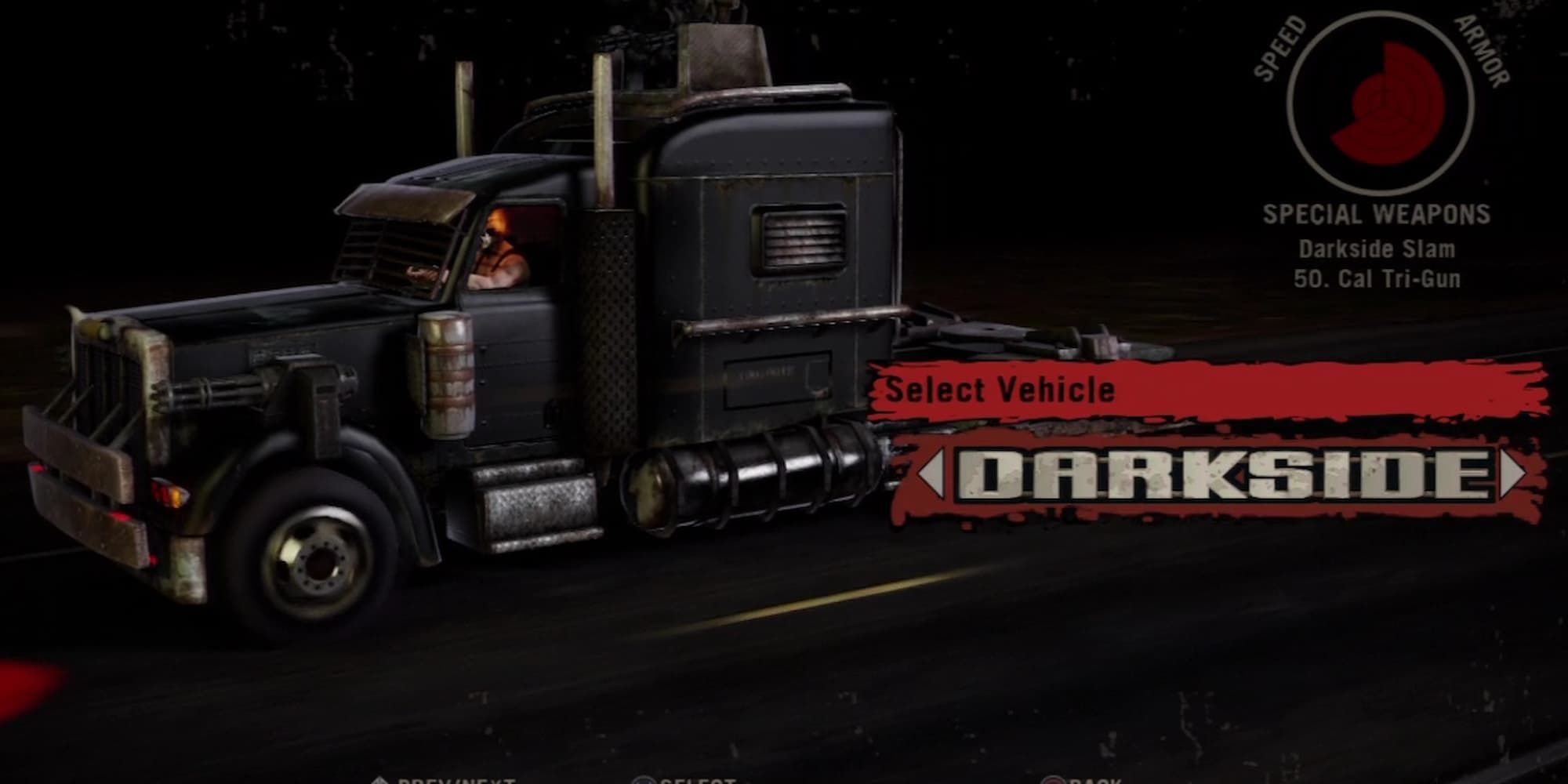 Darkside retains its ram special from previous games, but its alternate special is arguably more useful. It has full 360-degree lock-on and although it starts off slow, the amount of damage it deals can obliterate an enemy's health bar. You can also stop firing and resume whenever you want if an enemy breaks from your line of sight.

Given how slow Darkside is to control, this turret is excellent for dealing with faster enemies. You can even combine it with the turbo ram if you get the right angle. 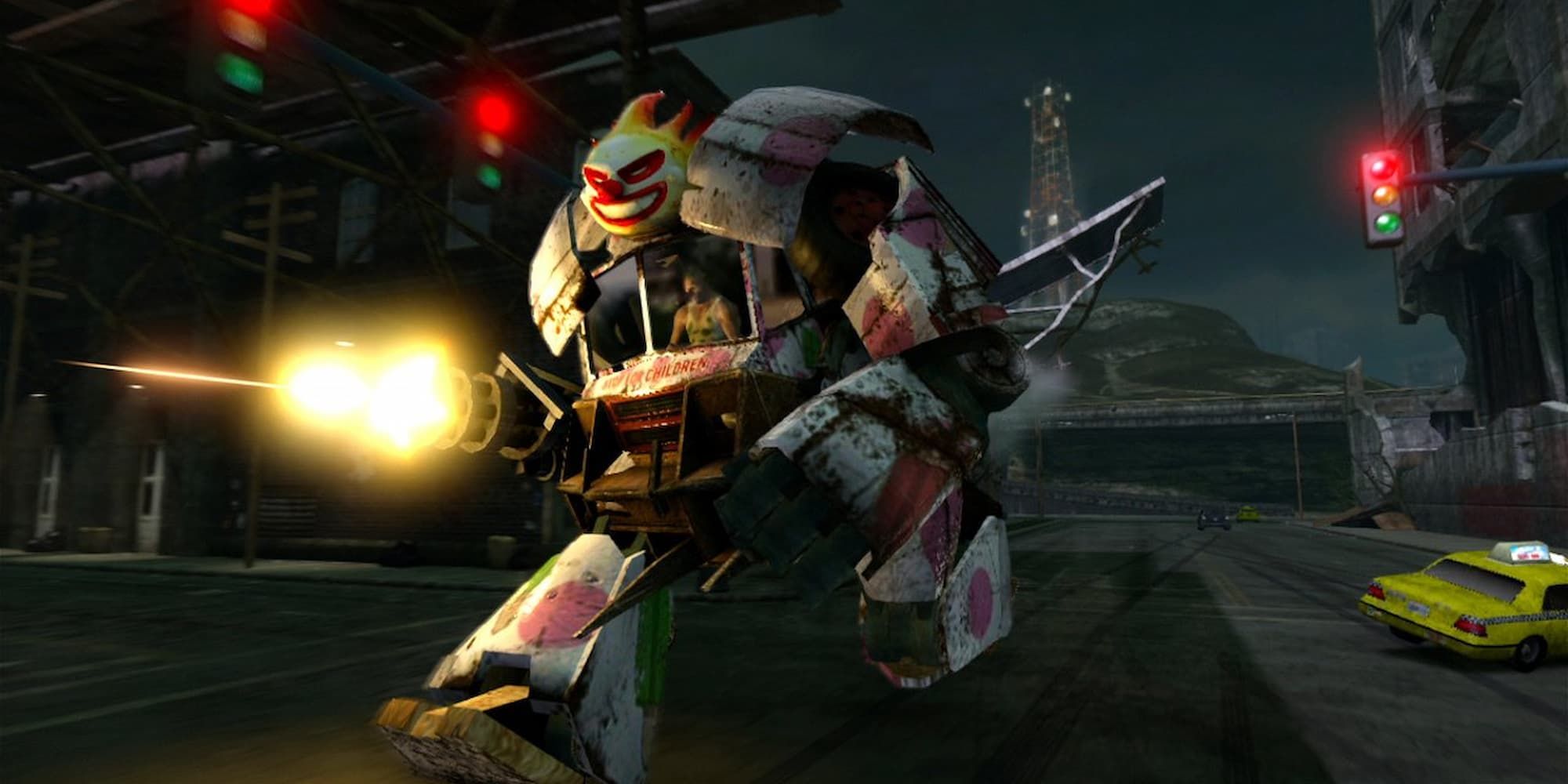 Sweet Tooth has become the mascot of Twisted Metal over time, and Twisted Metal: Black introduced the concept of his vehicle transforming into a robot as part of the special weapon. 2012's entry took this one step further and turned it into its own ability.

It may not be as beloved as other robots in games, but the Sweet Bot is still a formidable machine. It can fly and perform a ground pound shockwave as long as you have some boost, and it can throw the head as a missile. 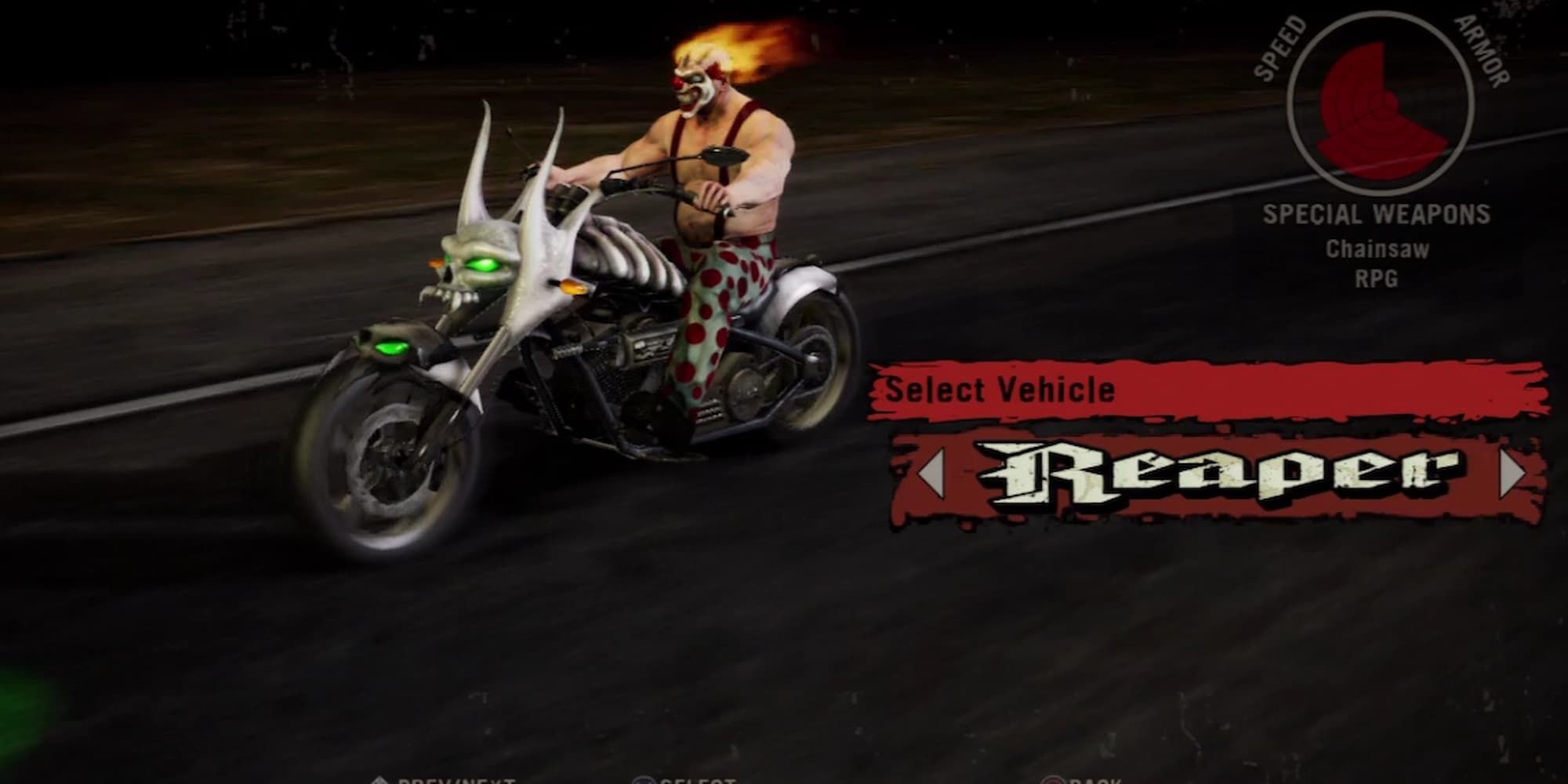 As is common to see in games, Reaper is a bit of a glass cannon. By far and away it's the weakest vehicle, yet its chainsaw special is easily the strongest weapon in the whole game if you use it right.

This is done by equipping the chainsaw, pulling a wheelie and dragging the chainsaw along the ground, causing it to ignite and become a 'flamesaw.' It loses all homing abilities but becomes powerful enough to obliterate any enemy's health bar, even if they're heavily armoured.