Hearthstone’s Ashes of Outland expansion is almost here, bringing with it new cards, and a new playable class, the Demon Hunter.

But the latest card to join the expansion caters to Warlock players. Keli’dan the Breaker is a six-cost Warlock Legendary with three attack, three health, and a Battlecry.

When it’s placed on the battlefield, destroy a minion of your choice. If the card is drawn on this turn, destroy all minions (except Keli’dan) instead. 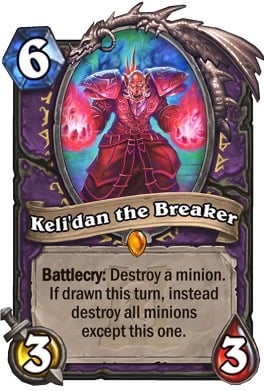 Stats wise, Keli’dan is lacking, but what makes it an interesting addition to the Warlock class is its flexible Battlecry.

In the worst-case scenario, Keli’dan destroys a minion for six mana and stands as a 3/3 on the board. The second part of his Battlecry, though, makes it a great top deck card.

If you’re reaching the late game, you’re behind, and your opponent has taken hold of the board, topdecking Keli’dan will help you stay afloat.

The problem with Keli’dan, however, is its inconsistency. You’ll have to have RNG on your side for the card to make much of an impact. It can definitely win you a game, but equally, it can easily end up being left for dead in your hand.