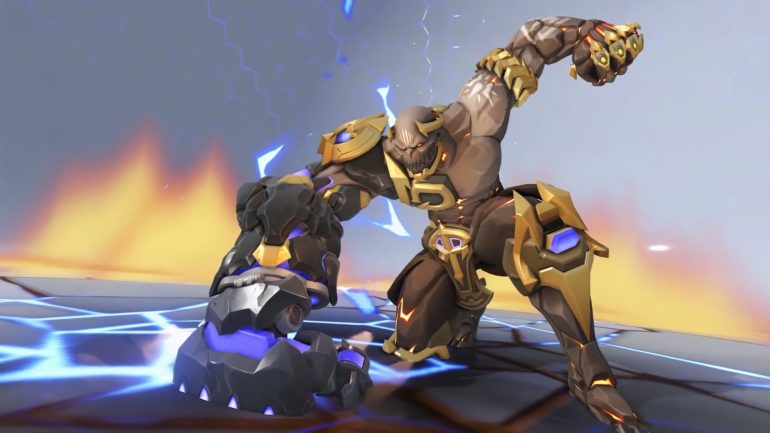 The thunder has been brought. After winning the 2019 Overwatch League championship, the San Francisco Shock have earned a victory hero skin that will live on in the game forever. On March 26, “Thunder” Doomfist will be available in Overwatch to celebrate the team’s win.

Every team that wins an Overwatch League championship gets a victory skin for a single hero. Last year, the London Spitfire revealed the Flying Ace Winston skin to celebrate their inaugural season win. As a perpetually vibrant and brash team, it’s no surprise the Shock went for drama with their victory skin.

Doomfist’s Thunder skin turns the hero into a moderately terrifying rock god, complete with sharp obsidian teeth. He’s decked out in gold and crystals and even his skin has turned into stone. The key part of the skin is his weapon, which is now a black and purple fist set to cast devastating thunderstorms. Considering the Shock’s team motif of earthquakes and electricity, the skin fits perfectly.

In 2019, the San Francisco Shock had a historic season in the Overwatch League. They won a stage championship and logged the league’s first “golden stage” by not dropping a single map to opponents in stage two. They developed a competitive rivalry with the Vancouver Titans, who they’d later face in the grand finals.

Despite a dominant season, the team unexpectedly dropped to the losers bracket in the season playoffs. Determined to climb back to the top, the team swept the losers bracket to make it to the 2019 grand finals. They beat the Vancouver Titans in a 4-0 sweep, partially due to DPS Jay “Sinatraa” Won’s Doomfist play, which explains the choice of Doomfist for the team’s victory skin.

Thunder Doomfist will be available in Overwatch on March 26 for 200 Overwatch League tokens.