As a result, Live Media has secured Spanish language broadcast rights for the BTS Pro Series Season 7 in the Americas and Southeast Asia. 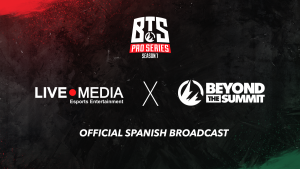 The Dota 2 tournament, which features the likes of Beastcoast and SG esports, will be broadcast on the Live Esports channel.

Live Media Esports Entertainment’s CEO, Luis Carrillo Pinto, commented:  “Our purpose is to provide the best possible content to our audience and sponsors.

“This event is organised by a company of great recognition in the production of major esports events such as Beyond The Summit and has the great attraction that it will have the participation of five teams that will play The International 10.”

The BTS Pro Series Season 7 is set to feature a prize pool of $50,000 (~£35,767) for both its Americas and SEA events. Some of Beyond the Summit’s previously organised tournaments include the CS_Summit 8, Rocket League Summit 2, and Dota Summit 11.

Michelle Cheng, VP of Sales & Marketing, Beyond the Summit, added: “Fans in LATAM, specifically Peruvian fans, have always been a strong staple of the Dota 2 community. We are very excited to start this new partnership with Live Media, a studio that consistently strives to provide top-notch Dota 2 content to fans in the region.”


Alongside its partnership with Beyond The Summit, Live Media Esports Entertainment is also the official broadcast partner of the OGA Dota Pro Circuit South America and the Regional Qualifiers to The International.