As a result of the agreement, HyperX will outfit Belong’s U.S. gaming centres with its products. This includes headsets, keyboards, mice and microphones. 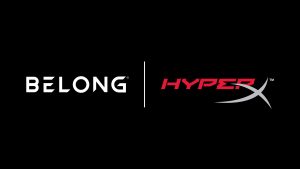 Belong first announced its rollout of ‘experimental’ U.S gaming centres in June 2021, with Houston revealed as the first destination. During the initial release, PlayStation, ViewSonic, and Mavix were some of the brands announced to equip these gaming centres.

Wendy Lecot, Head of Strategic Alliances, HyperX, commented: “Gaming experience destinations like Belong help to fuel the next generation of amateur gamers to compete on the global stage.

“HyperX is a champion of all gamers and our combined efforts with Belong aim to connect all who share a love of gaming in local communities.”

The HyperX partnership expands on Belong’s existing relationship with HP, the peripheral brand’s parent company. Following a partnership with OMEN by HP, Belong’s U.S. gaming arenas will also be fitted with the brand’s gaming PC’s.

Wim Stocks, Head of Partnership and Commercial, Belong Gaming Arenas, added: ”Part of our mission at Belong is to provide our gamers with top-notch gaming experiences, which is why we’re partnering with the de facto leader in peripherals.

“By providing access to the same equipment that the pros use, we’re able to give our community a chance to take their gameplay to the next level.”

Esports Insider says: Belong has assembled a strong portfolio of partners for its U.S. gaming arena rollout, with HyperX another notable name being added to the list. Alongside equipping the arenas with peripherals, it’ll be interesting to see if there will be any activations between the two when the gaming arenas being operating around the country.