North American organization Golden Guardians has announced Tanner “Damonte” Damonte as its newest mid laner. He will be joining the team right before the start of the 2020 League of Legends Championship Series Summer Split. However, GG’s former mid laner, Greyson “Goldenglue” Gilmer, said this news left him “speechless.”

This is a modal window.

Beginning of dialog window. Escape will cancel and close the window.

League of Legends pro teams are now gearing up as the Summer Split inches closer. Since the start of the split is only days away, teams are pushing for final roster changes and switches. Golden Guardians announced its newest addition with plenty of history.

Damonte will be the team’s starting mid laner, taking over for Goldenglue for this year’s Summer Split. He’s joining right out of Dignitas Academy, playing from December 2019 until now. His achievements include winning the 2019 LCS Regional Finals with Clutch Gaming and coming in second place 12-6 for this year’s NA Academy Spring Split.

Although Damonte played a variety of teams in 2015, he lasted over a year with Echo Fox from 2017 to 2018. When he joined Clutch Gaming, he found himself playing over five major tournaments before Clutch agreed to merge with Dignitas. Although they came in first for the Regional Finals, the team decided not to renew his contract for the upcoming year. Disappointed with the news, Damonte declared he was a free agent. He then joined Dignitas Academy in March 2020.

Following the announcement, Goldenglue shared that the news was unexpected to him. He clarified that he was aware of the roster change but that the current situation had left him speechless. Goldenglue played as Golden Guardians’ mid laner from November 2019. He’s previously won three NA Academy Splits and came in second for two NA LCS Playoffs. Due to his impressive history of good results, he may find a team to sign with soon. It’s unsure whether he will for this coming split since it’s only 10 days away. Either way, fans are cheering him on and supporting him as he passes his position on to Damonte.

I’m kind of at a loss of words because this was very unexexpected and surpsising change for me. I know that I’m an LCS caliber Mid, so I won’t stop fighting. I will try to provide more details soon. https://twitter.com/GoldenGuardians/status/1269037545268150278 …

To strengthen our LCS team in the Mid lane, we are excited to announce that former Worlds competitor, @Damonte will be joining the Golden Guardians as our starting LCS Mid for the 2020 Summer Split! 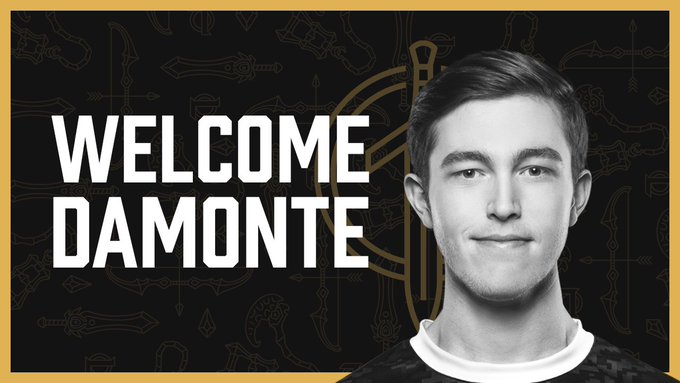 Just for clarification because some people are asking, I was told this was happening prior to this post I am more speaking about being speechless about finding myself in the situation that I am currently in

What do you think of Damonte’s new position with Golden Guardians? Let us know in the comments below, and be sure to stick with Daily Esports for more esports and gaming news.